It’s finally spring proper and our garden is growing again in the most spectacular way. The fastest grower has been our Hellebore ‘White Single’ which sadly didn’t flower this year but its leaves have gone from zero to mini-tropical palm tree hero in the matter of a week. 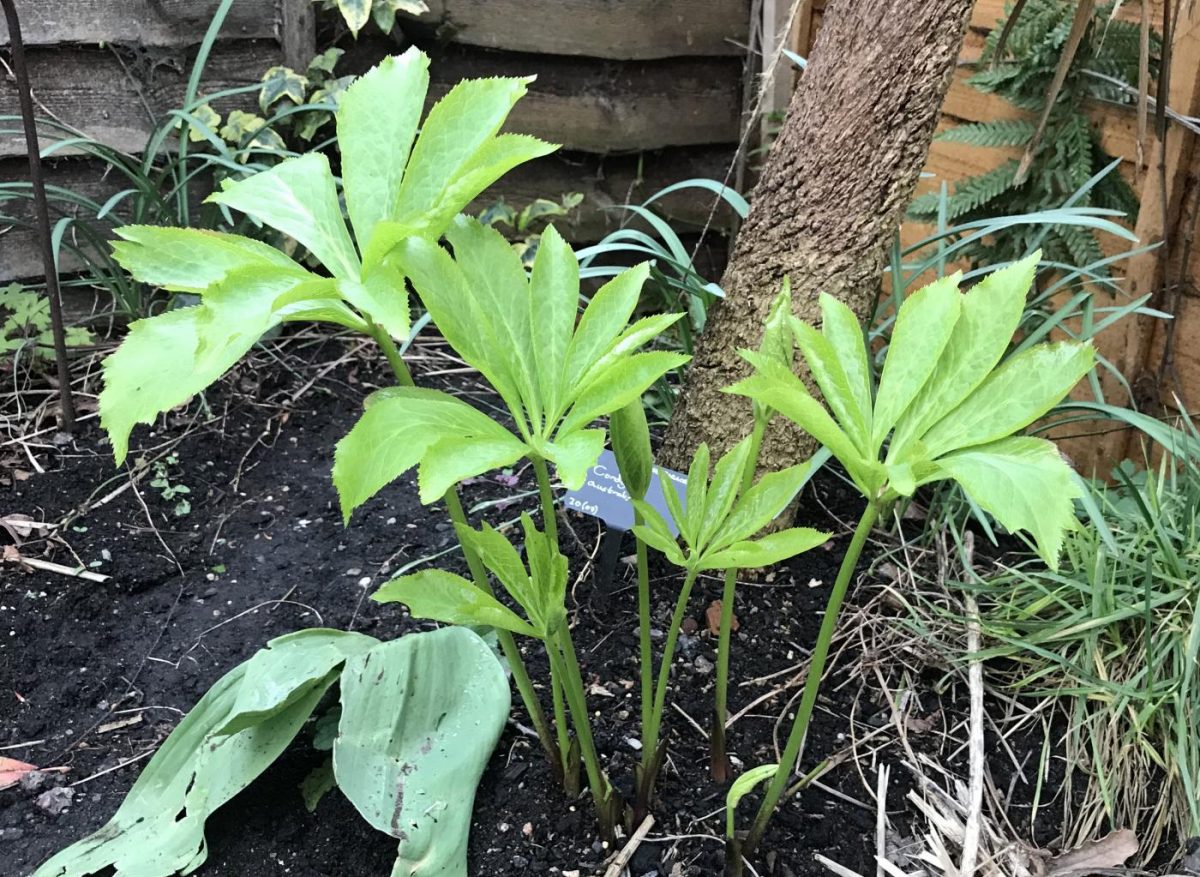 It’s been a symbol for me during a very delayed spring where some plants (not all) are almost a month behind where they usually are.  Our garden is changing rapidly from its planned winter total dieback. The border changing from mud and dead leaves to near total green in a matter of days.

Our white garden is finally happening. Long-term readers will know I’ve been trying and failing to get this right for the past few years (where our colourful garden is only white in the first few months of the year). Note to self: the white garden only really has proper impact in an early April peak because I planned most of our white flowers to open in sync with our plum tree. I always forget my own plan, spending February and March huffing and puffing about the white garden going wrong again. Brunnera macrophylla, Narcissi, Anemone blanda, Fritillaria meleagris var. unicolor subvar. alba and Pulsatilla vulgaris ‘Alba’ are all opening this weekend. 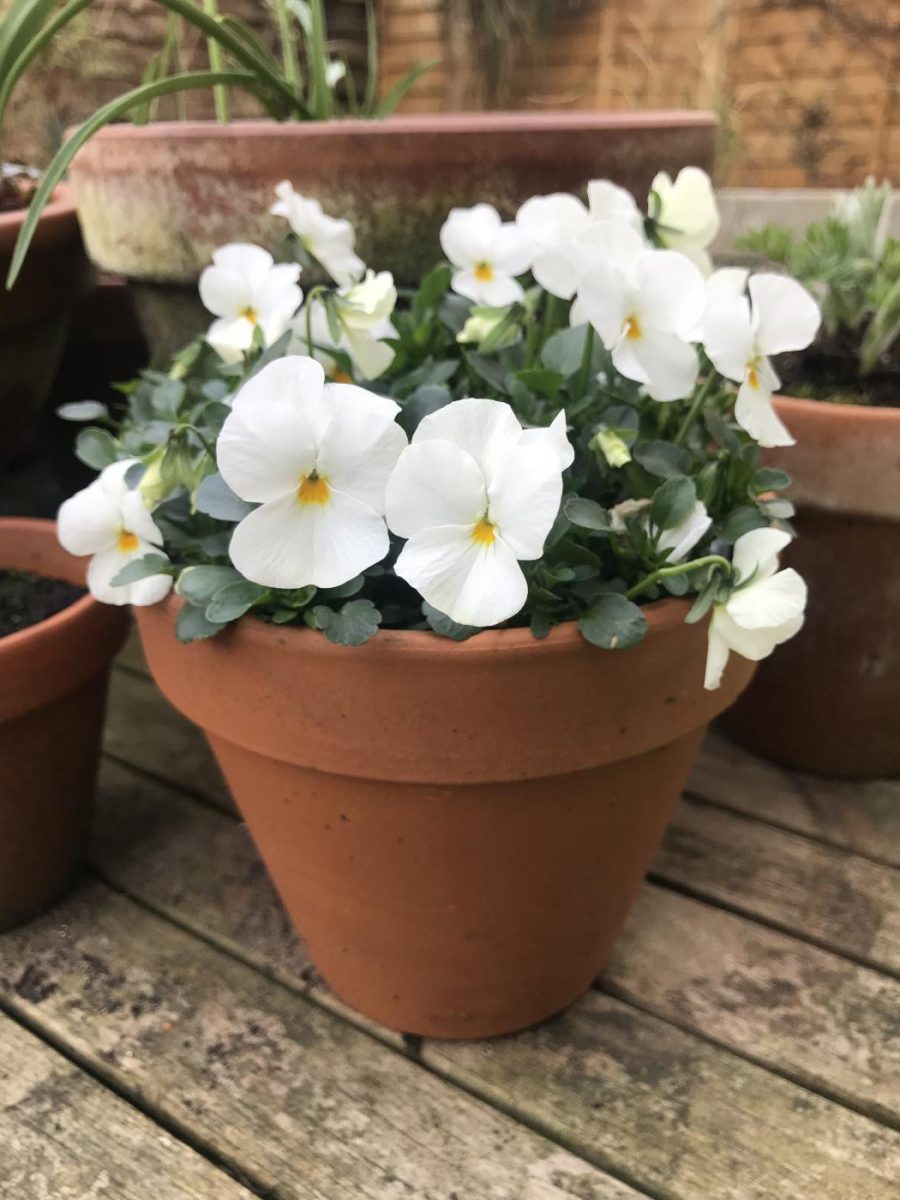 I’ve been grouping pots of white flowers on the table to create maximum impact from inside the house. This worked really well for the snowdrops and Hellebores earlier in the year. 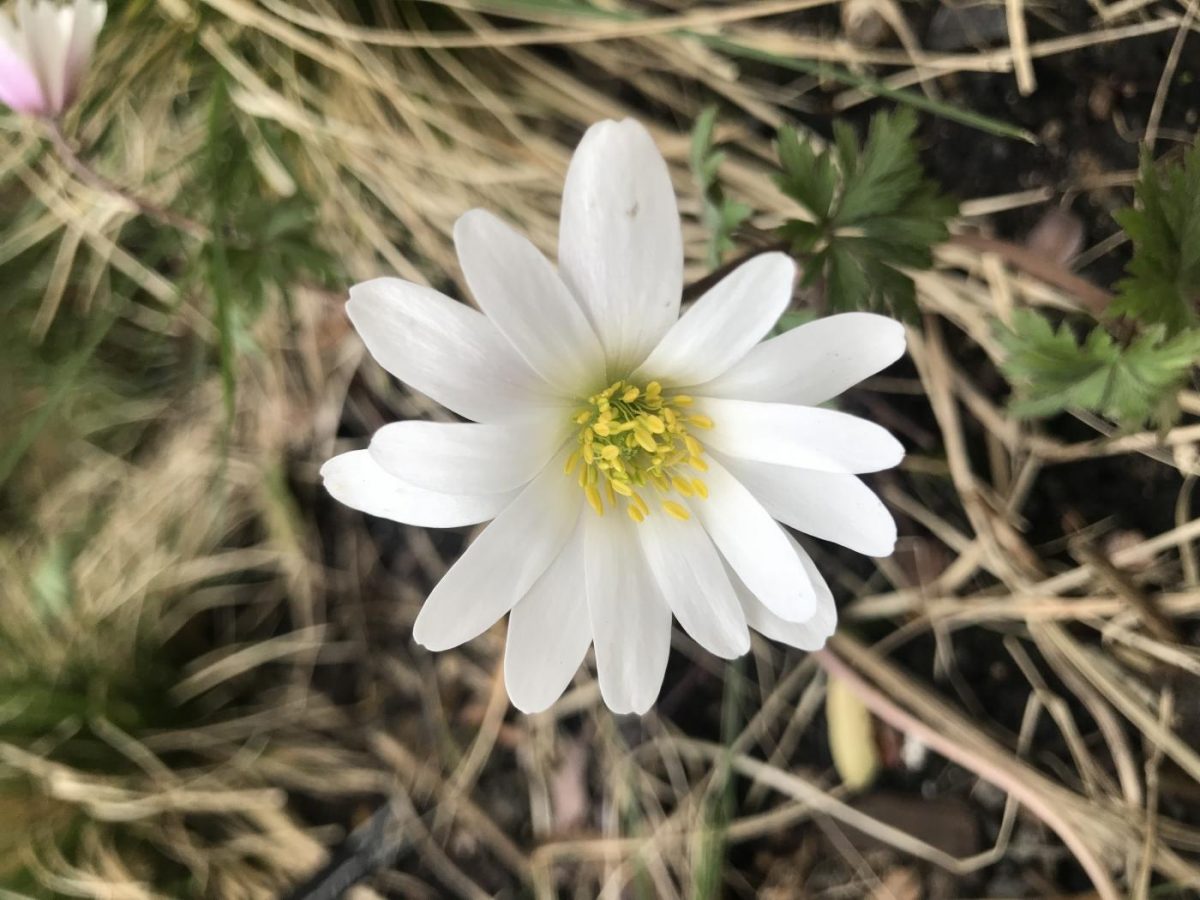 All out of pots

With that all going on outside, inside is a production line of seedlings and cuttings. For the first time ever I really am stuck for space and pots to grow plants for our garden and my allotment. I’m juggling pots like never before, potting on some plants and using the old pots for the next lot of seeds. Right now I need to sow sweetcorn but the pots are taken up with Solenostemon and tomatoes. I won’t bore you with photos of propagation station this year, needless to say our front room is seedling carnage.

Most seeds have germinated well including sage, basil, Leonotis, celery and tomatoes. I sowed my brassicas outside just before the second wave of the Beast from the East hit and I suspect this killed most of the sprouting seeds as there was unusually poor germination. I re-sowed the cells without seedlings. The only seeds I’m having genuine trouble with this year so far are Persicaria and Verbena hastata, despite cold stratifying them over winter in the fridge – looks like I’ll have to inflict them with another icy blast before they germinate. 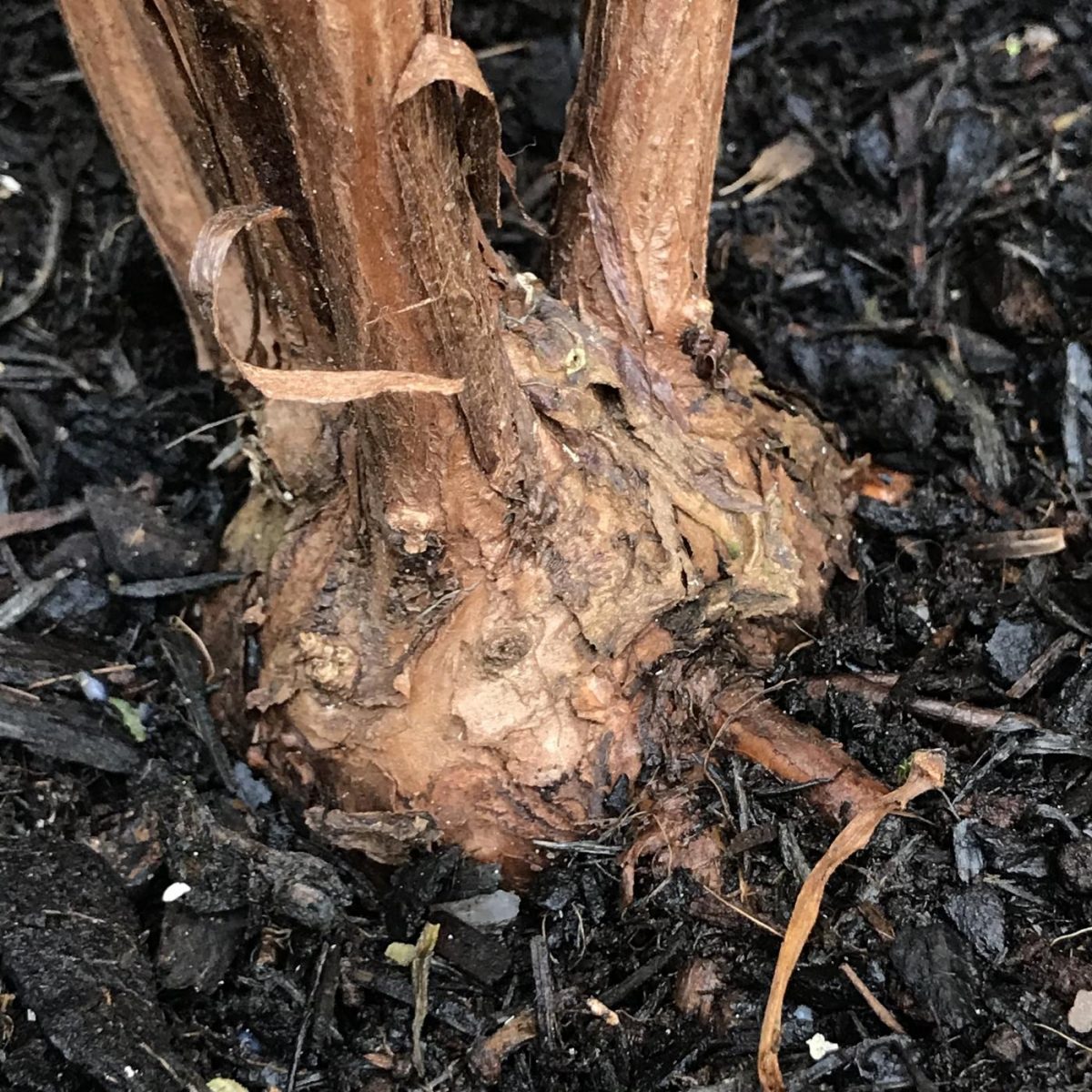 Wait, don’t tell me – I know what you’re thinking: “Look at the lignotuber on THAT.” Am I right? No… OK awkward… Over the last year I’ve become somewhat fascinated by the way some of our shrubs and trees have formed a bulbous mass at the foot of their stems. Melianthus major, Eucalyptus gunnii and Fuchsia triphylla (above). I was reliably informed by KevsOrchids that this is called a lignotuber. A lignotuber is a woody mass at or below ground level. Much like a herbaceous tuber, it contains energy reserves and shoots to enable the plant to regrow in the event of a fire, total drought or a good animal munching. Anyway, I found it interesting… 🙂 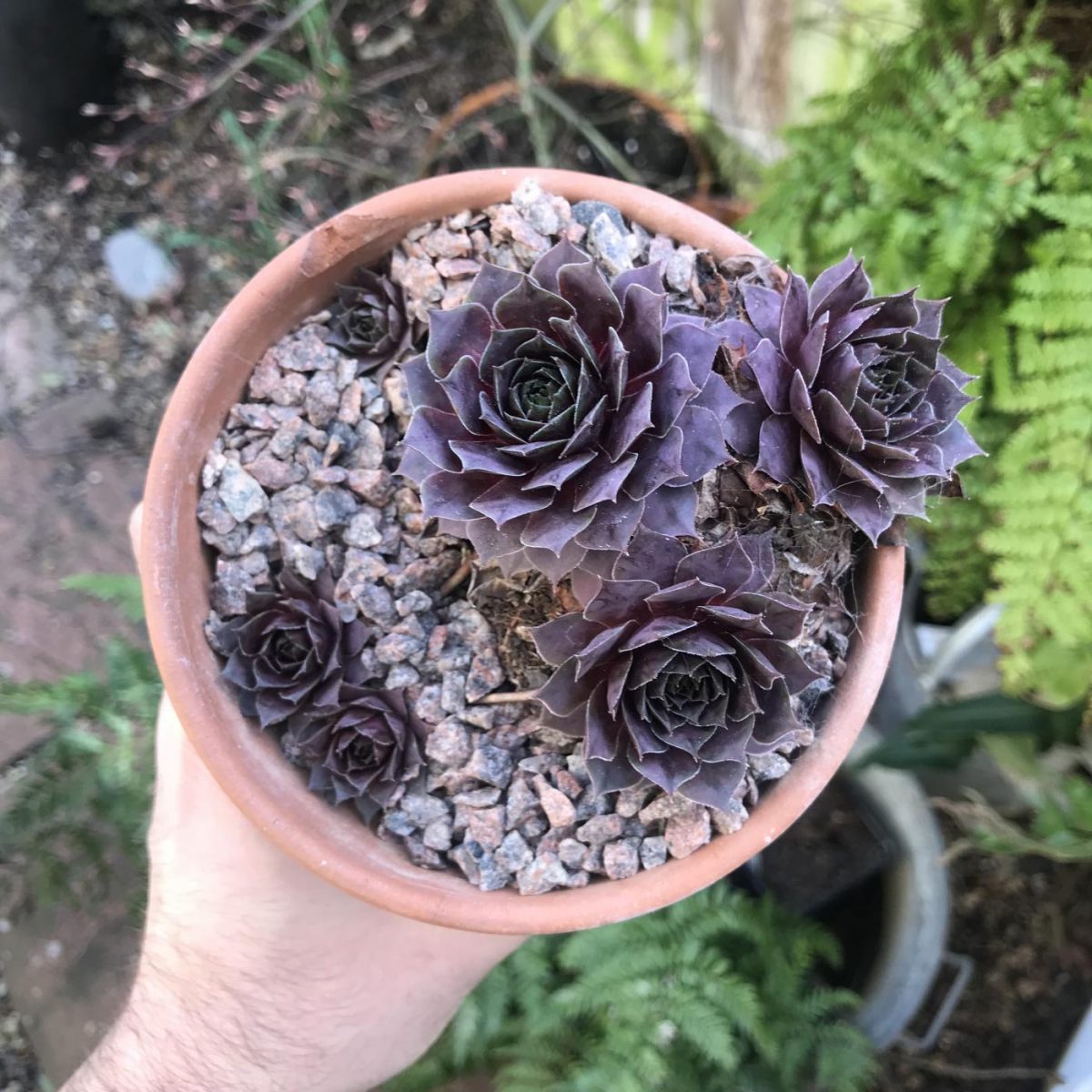 I’m really happy that my collection of Sempervivums has done so well this winter. I can never predict how our Sempervivums will grow. One minute they can look a spectacular mass of geometric leaves, the next they’ve flowered and near enough died. Right now though, they’re healthy and full of colour. 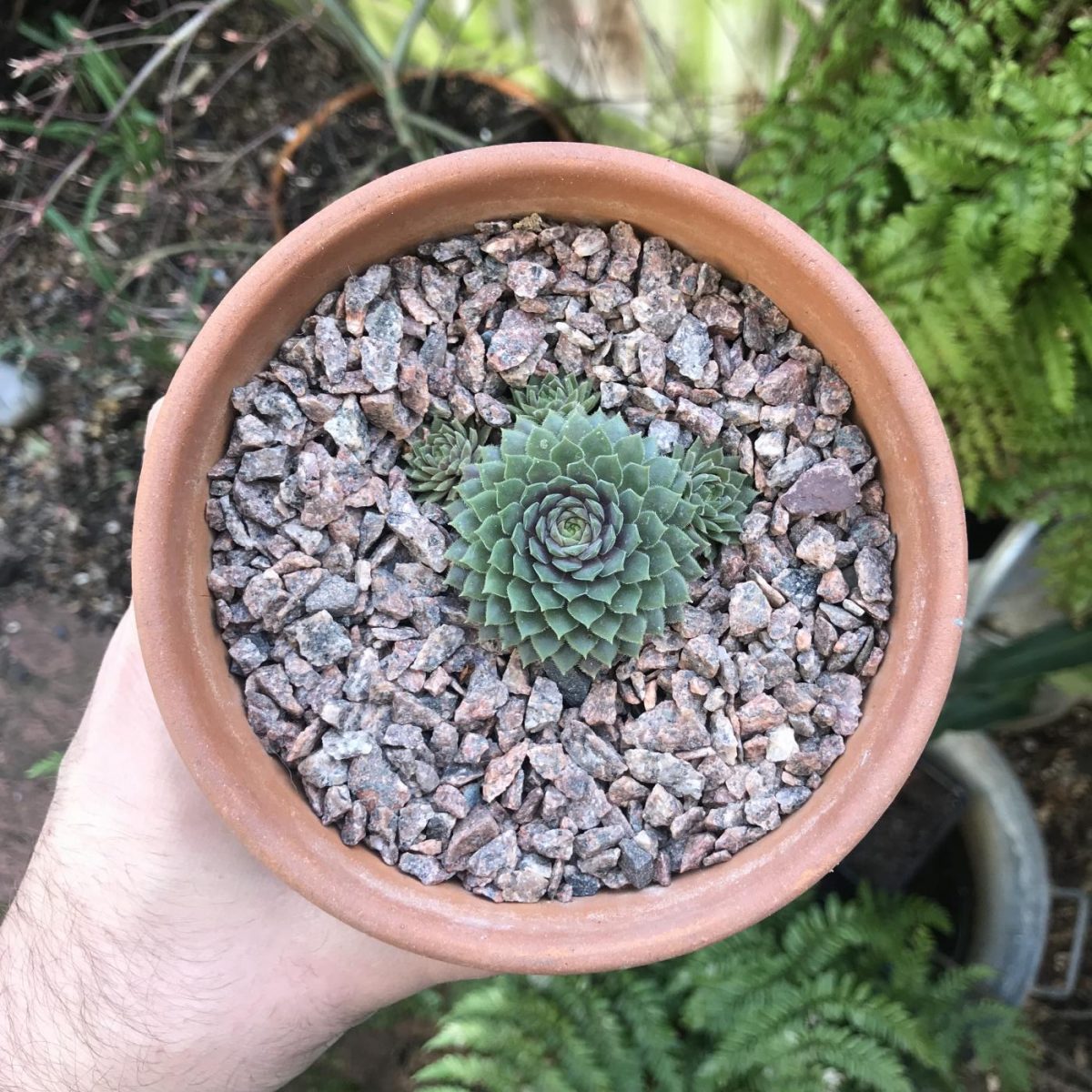 Our garden is actually a patio, so the vast majority of our plants are grown in pots. In winter, everything dies back leaving the garden looking “like a bomb has hit it” – a guest’s description as well as my own! To give you a taster of what it looks like right now, here is a messy little corner full of plants only just growing:

I’m not personally bothered by this mess because the garden is more for me to study how plants grow than to look good 365 days of the year. However, I do feel the need to apologise when people come over and ask to see the garden between Dec – March only to find what looks like dead plants and a pile of pots in winter.

As the buds burst open though, I’m reassured that in the matter of a week or two our bonkers little jungle will have re-emerged from its winter rest. Leaves are erupting now at tremendous speed – the climbers in particular I can barely keep up with as they race to cover the jumble of fences. Anyone would think they’re embarrassed about the hodgepodge of panels.

3 thoughts on “Pot’s Growing On: white flowers, propagation and sempervivum”