Can you believe I’ve had my allotment for two years?! The excitement of taking ownership still feels like yesterday to me, I love it. Yet today my mind has started drifting to our third season together, how time flies etc.

After going ballistic with carrots this year, we’ve had our fair share of the quirky little blighters (orange and purple!) which we’ve used to make soup and for roasting. I’ll grow the same number next year, approx 10m of them 2.5cm apart. I grew four different varieties and none were affected by carrot fly even without netting, which is positive (lucky). The cultivar ‘Resistafly’ tastes nice making it a good choice.

Roots wise, on the allotment I’m also growing parsnips again, Pastinaca sativa ‘Gladiator F1’.  They’re still in the ground taking a few hits of frost which helps to sweeten them up – I’ll use them after Christmas.

Growing pumpkins for the first time this year, I opted for ‘Evergold’. I’ve been pleased with this cultivar. Two plants were enough, vigorously producing seven large pumpkins in time for Halloween as the packet promised. Enough for Chris to make into soup. The plants did become badly covered in powdery mildew toward the end but by that point the pumpkins were ripe. Next year I am going to grow more pumpkins because they’re fun and we liked making soup out of them. Watch this space.

My little stepover apple trees have grown into shape well in their second season. It’s fun pruning fruit trees. One tree, cultivar ‘Falstaff’, I allowed to produce its first couple of tasty apples (you’re supposed to wait until stepovers and espaliers are established before allowing to fruit but this plant looked healthy and full of energy – and I was eager to try one of the apples). They were sweet, a little sharp and nicely crispy. In 2018 I’m looking forward to a larger crop from my three different cultivars. I’m also planning to introduce some more varieties in a mini orchard – more on this in a January update.

As I mentioned in the last update, I missed the Cauliflower ‘Boris F1’ that I was growing while we were on holiday in Cornwall so most weren’t edible, except this little geezer. It had incredible flavour, proving once again that homegrown vegetables have flavour greater than anything in shops. Sweeter and fresher.

On the allotment right now, I still have a few really healthy Kale ‘Dwarf Green Curled’ which didn’t get whitefly quite as bad as last year, edible for the winter months. I’m also looking forward to the late winter crop of Broccoli ‘Early Purple Sprouting Red Arrow’ (phew, what a name!) which I thought were absolutely stunning last year, beautiful while growing and on the plate. Brussel sprouts are looking good too. 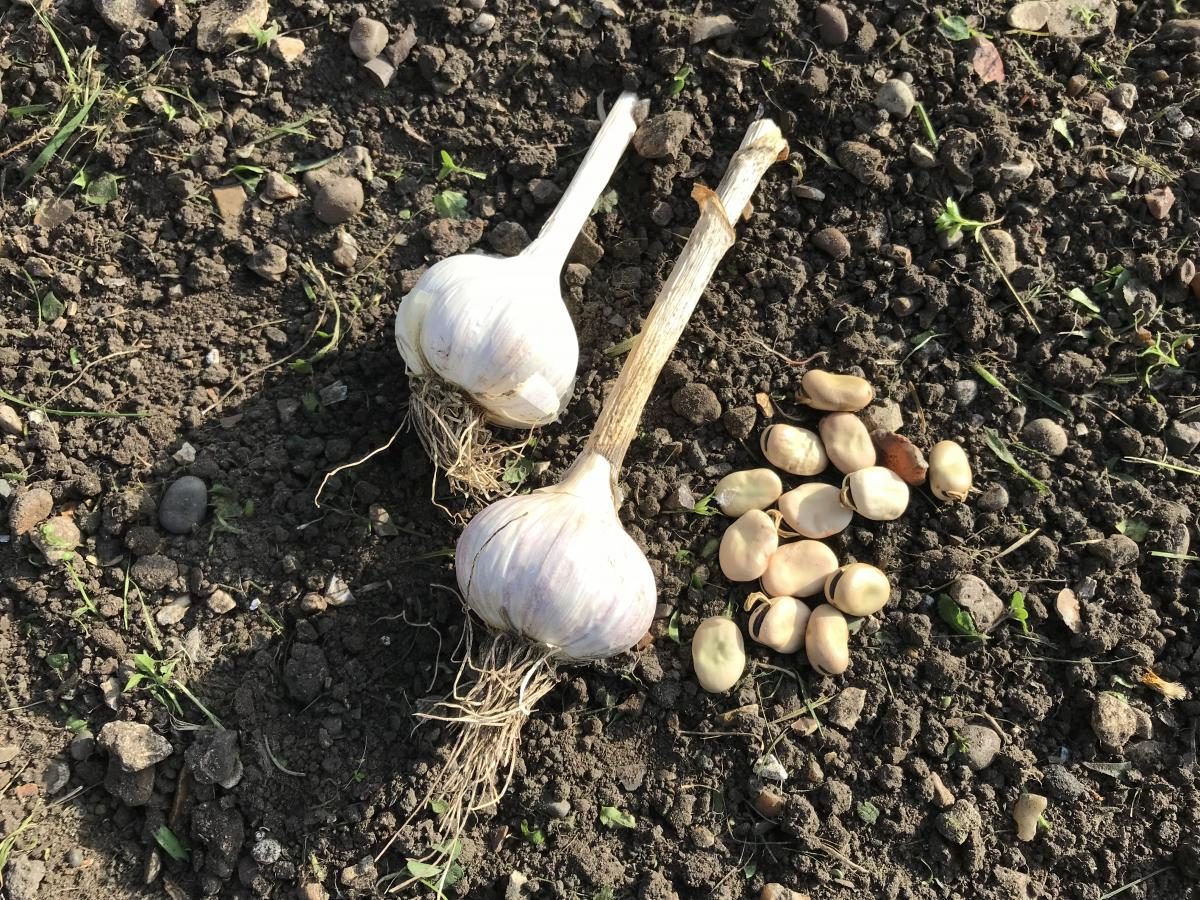 This year, as I’ve mentioned previously, I’ve been collecting and hoarding as much seed as I can myself. Last month I planted garlic from the biggest, fattest bulbs I grew last year and I’m now into the third generation of broad bean seeds from my ‘Aquadulce Claudia’ plants. I’m not convinced the broad beans are as good as the first generation pure strain but they certainly grow and crop well. I’ve also planted Pea ‘Meteor’ again, another of my favourite winter growing crops, though you really do have to watch for mice and birds eating the seed before germination.

After sowing my colourful glass gem corn a little too late, my crop was modest and some ears didn’t fertilise well enough so the kernels were quite sparse. Still, lessons learnt and I’ll use this lot – now dried – to grow another crop earlier in spring (and use a bunch to try making homemade pop corn – I’ll let you know how that accident waiting to happen goes…) The Dahlia patch was frosted at the end of November, so I chopped them all down for composting, removed the stakes and then mounded the tubers with spent compost and soil. Usually this works fine in London but in the last couple of weeks, like the rest of the UK we’ve had temperatures plummet as low as we saw in the big freeze of 2010. My hopes for the Dahlias on the allotment now for survival are low but it’s an experiment and I’m going to risk them staying in now. Though I might give them an extra layer of mulch in the next dryish period.

My next step is to have a real think about the set up of the allotment over the Christmas weeks. I’ve ordered a bunch of different maiden whip fruit trees to form the new mini orchard. They arrived today bare root, so I’ll heel them in until after Christmas when I’ll have time to get things sorted. Over the coming weeks I’ll also be planning the vegetables I want to grow and where on the plot I’m going to grow them, rotating everything from the last two years.

Pop back onto my blog in the new year for lists of the seeds and plants I’ll be growing.

What vegetables are you growing in 2018? Please share in the comments below and let’s grow together 🙂