I returned to the National Dahlia Society’s Annual Show today after being totally gobsmacked last year. Though trying not to, I am becoming a bit of a Dahlia connoisseur. And I have to say, this year’s standard felt higher than last year.

I made it to the morning of the first day, so every flower was at its peak, fresh from judging. I arrived fresh from meeting Mary Berry (I’m more surprised than you).

Dahlias are wonderful for their almost unnatural perfectly plasticky flowers, and at a show this is taken to the next level with every millimetre of precision growth. 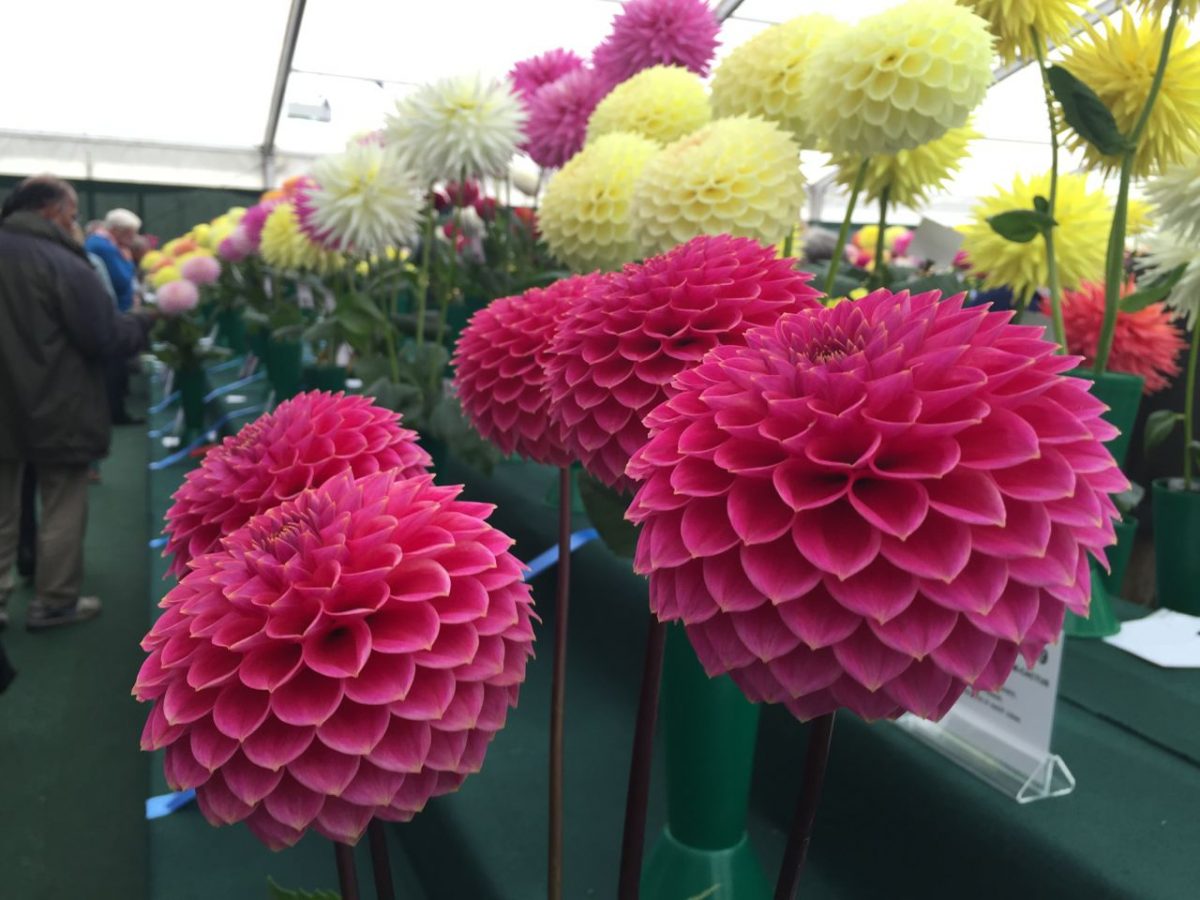 Like a moth to a neon lamp, I’m drawn to biggest, loudest, eyeblastingly pink Dahlias. I can’t help it. So today I forced myself to investigate other forms and colours. 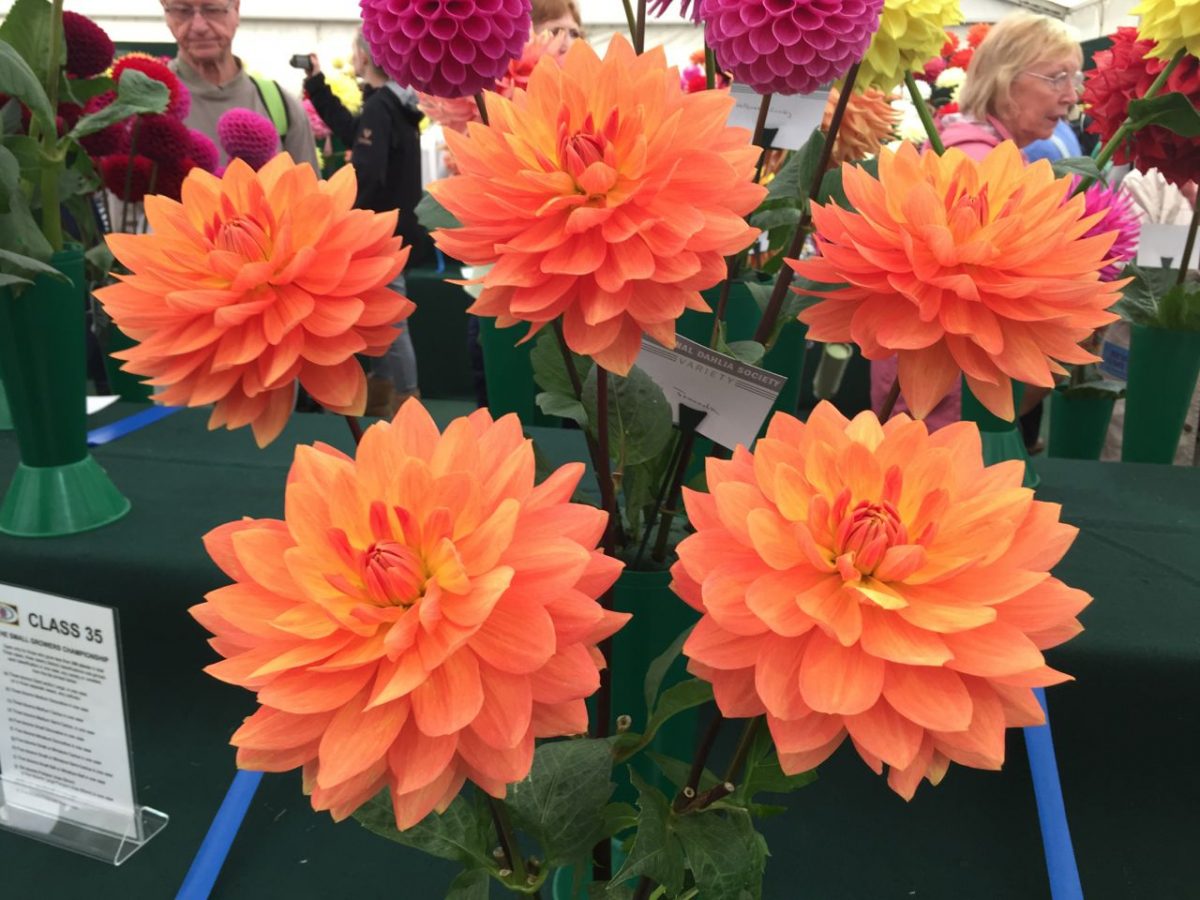 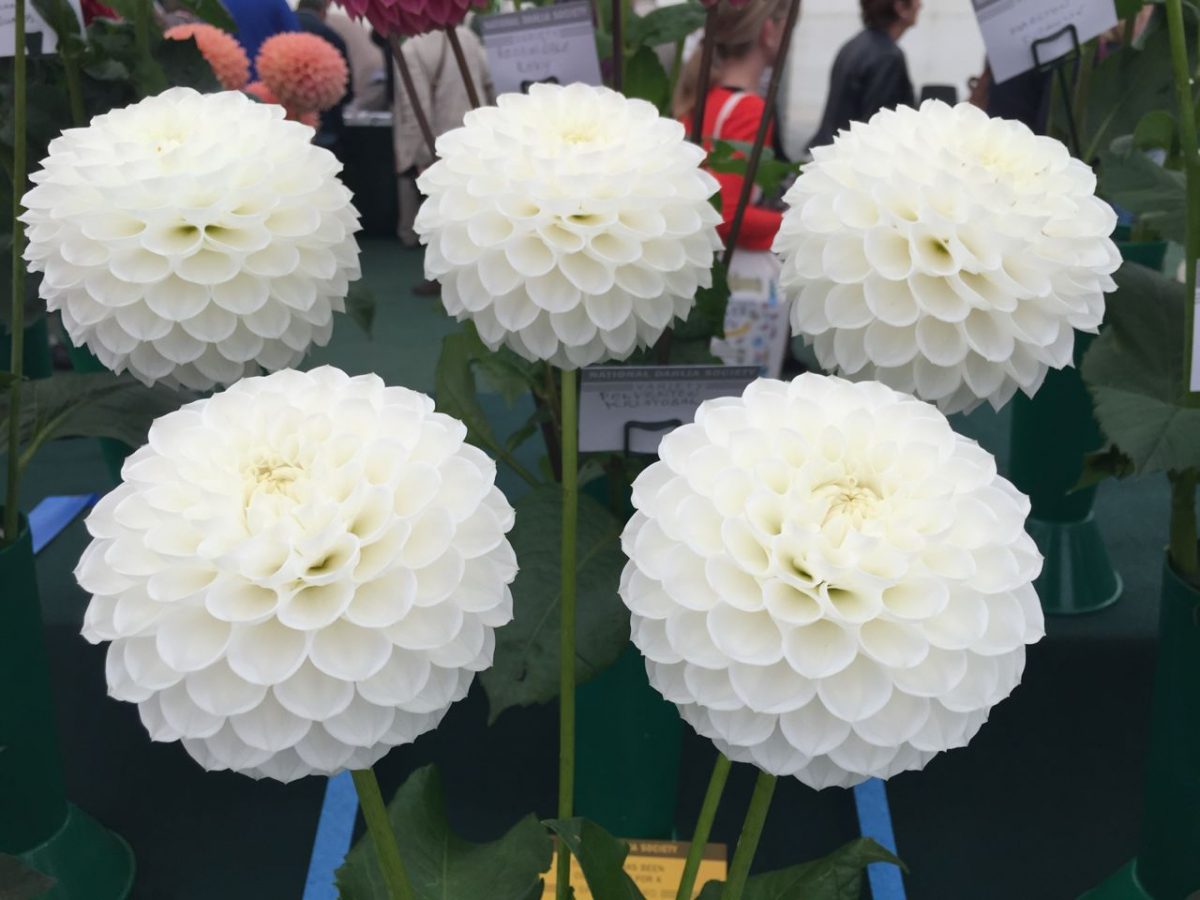 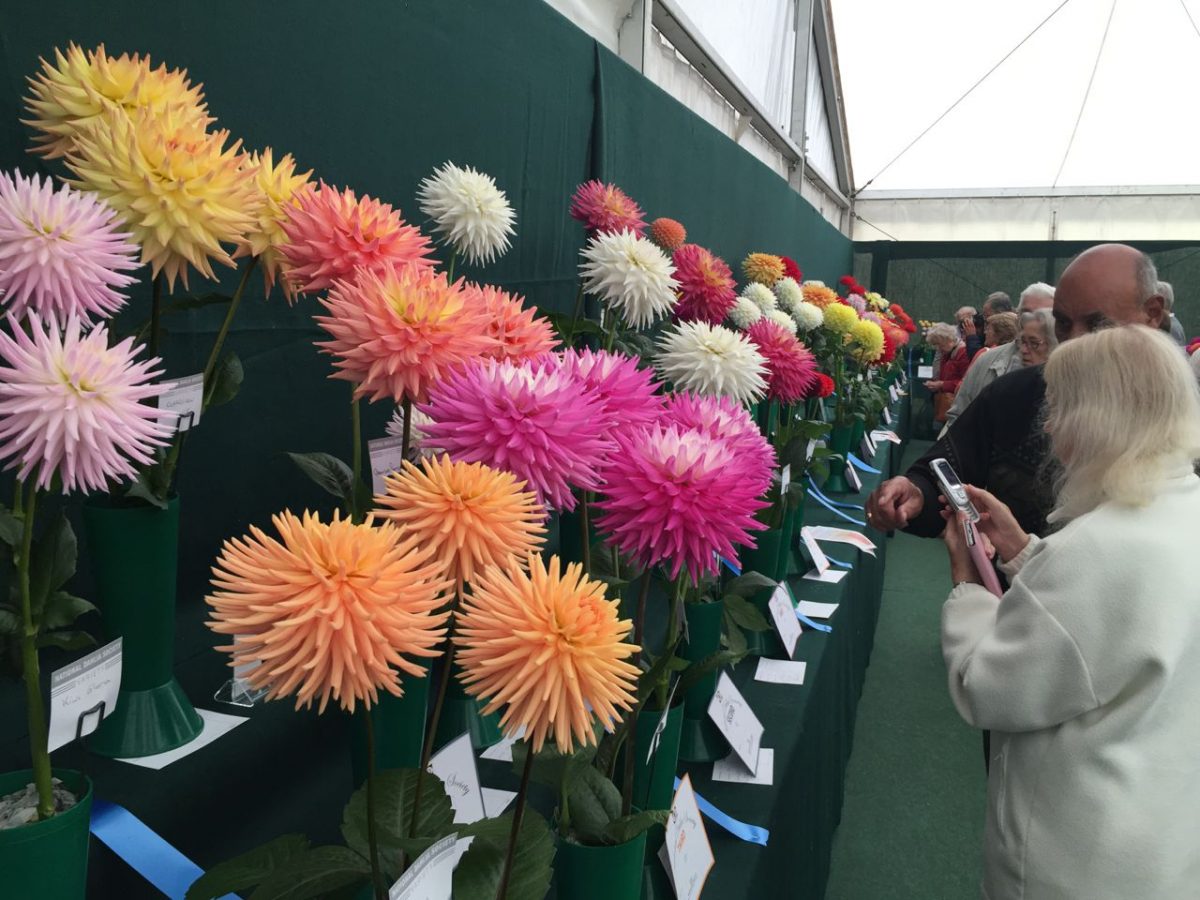 One of the best moments was bumping into a friend I hadn’t seen for over eight years – there’s no better place to meet than a marquee stuffed with thousands of giant flowers. She introduced me to her friend who had just won first prize for his Dahlias (yes, my eyes were wide with excitement at this point).

He specialised in Fimbriata Dahlias and kindly spent some time explaining some of his techniques. Including the sheer scale of his growing operation with hundreds of plants growing. Well, it paid off with the below winning flowers. 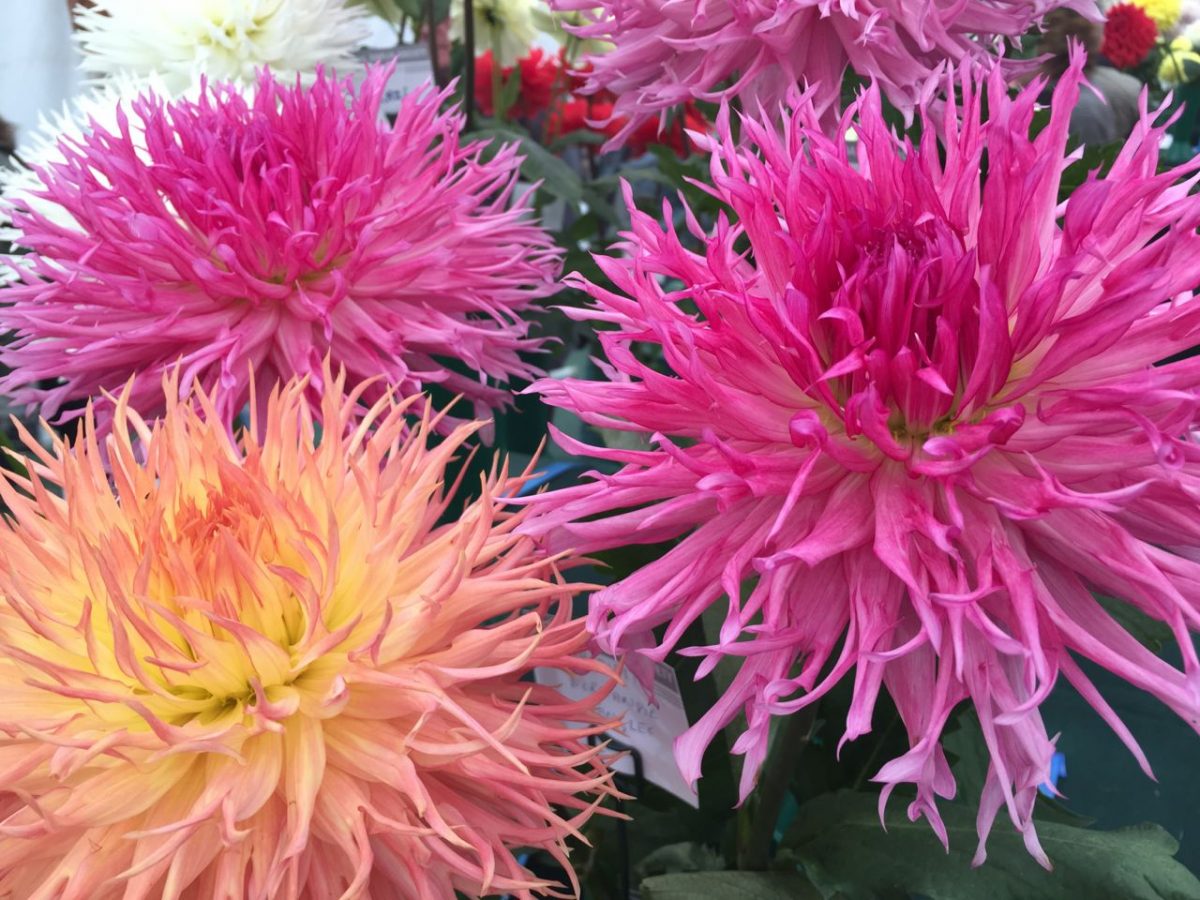 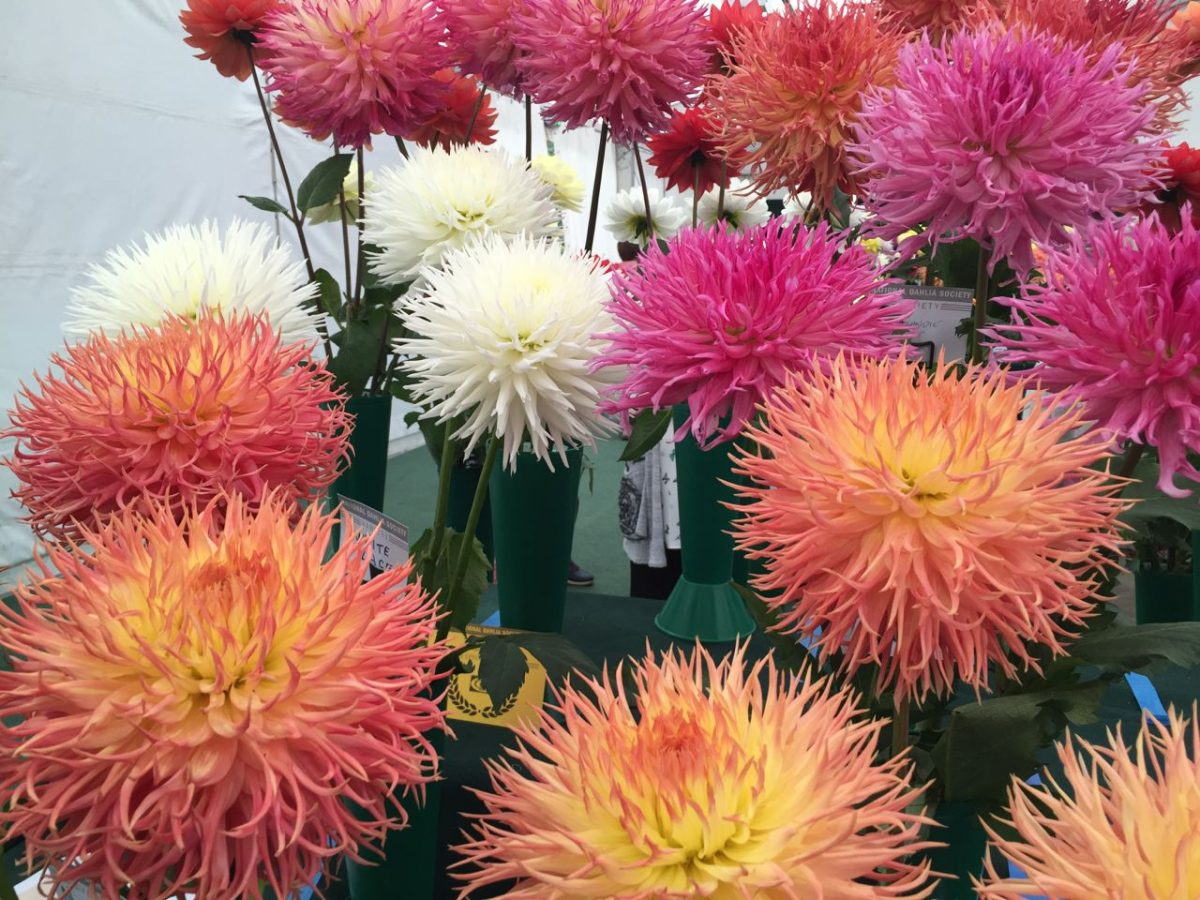 His white ones were my favourite, proving prize winning blooms can distract me from the neon pinks. 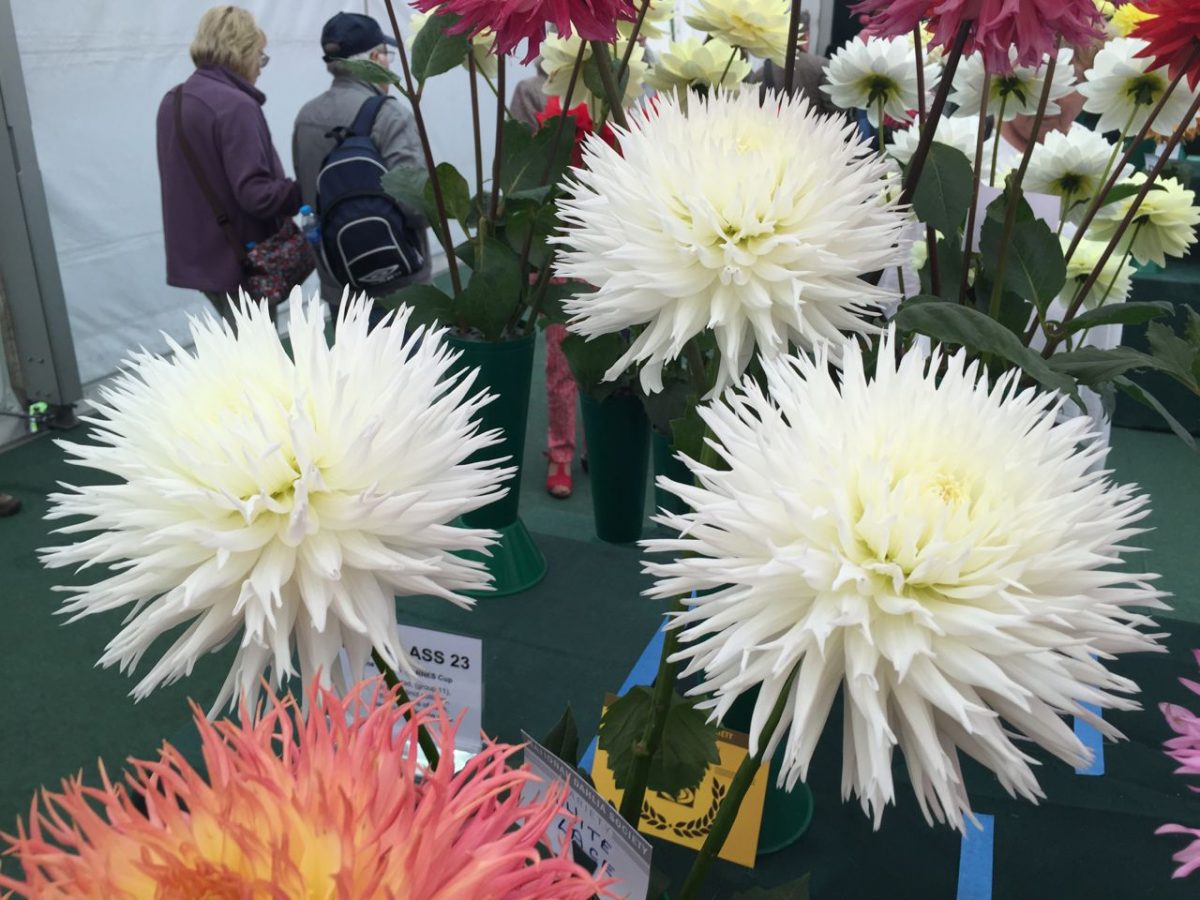 The marquee at the show really is crazy in its scale of flower. 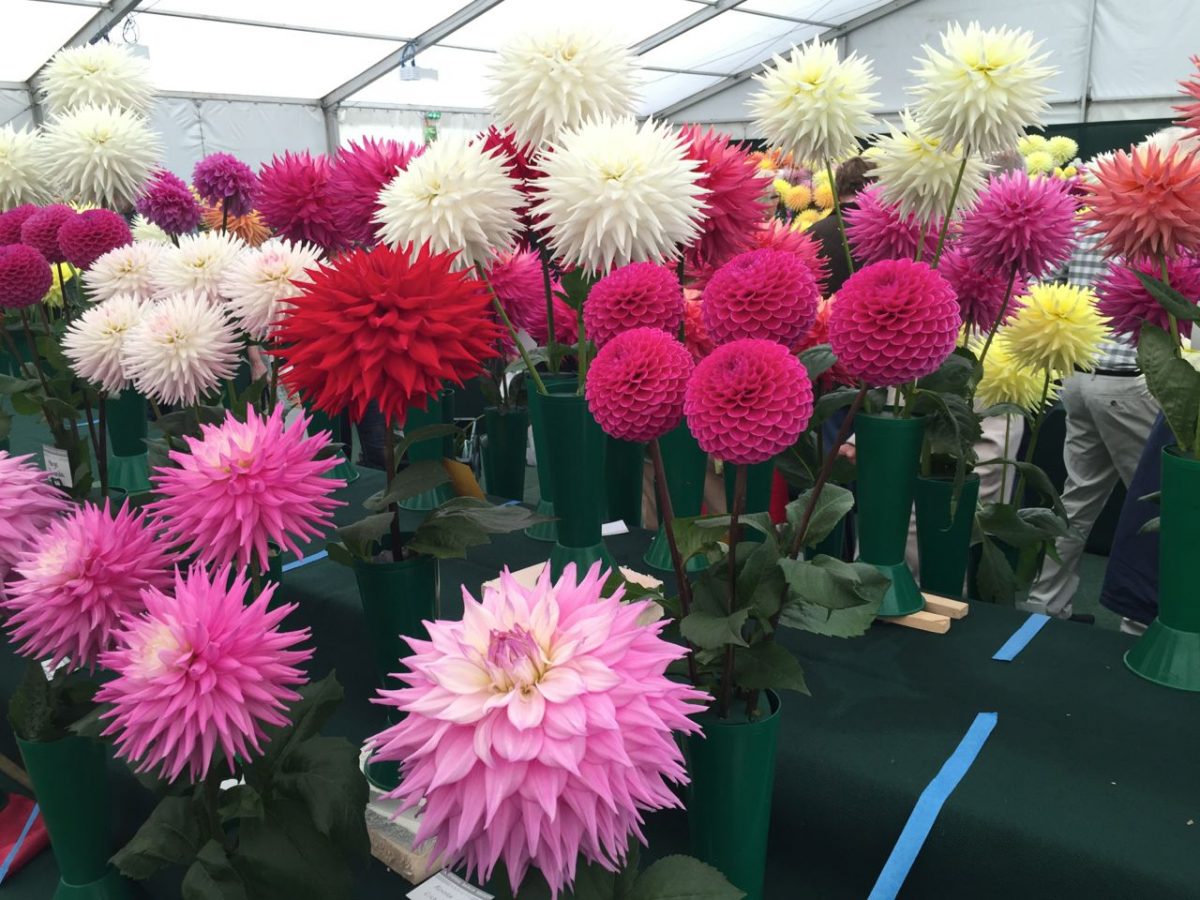 There was even a display that paired my two fave plants together, ferns and Dahlias. Reminding me of the incredible Mexico garden at this year’s Chelsea Flower Show. 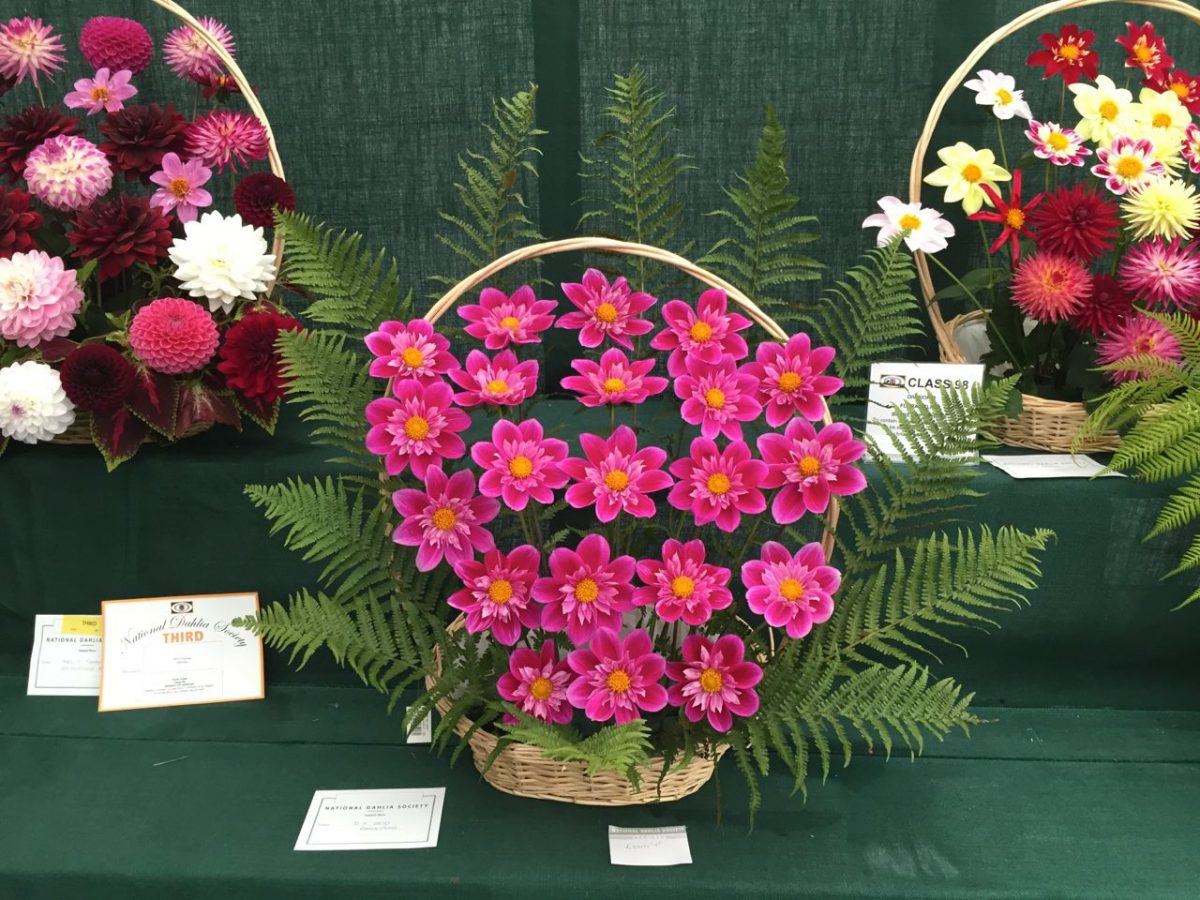 From show bench to trial borders

All that pink leads me nicely onto my big tip for next year. Last year I was (and still am) all about Dahlia ‘Emory Paul’, which, like a giant dinosaur is creaking into flower in our garden right now. For next year, say it with me: Dahlia ‘Jocondo’. It’s a must.

I’d already spotted (not hard, given how loud it is) this badger up on the RHS trial fields in the morning.

The RHS Trial Field is one of my favourite places. It pits plant against plant, assessed over years by the weather and experts for garden goodness. Dahlias are receiving all kinds of attention right now, with both garden ready plants tested and smaller cultivars in pots. 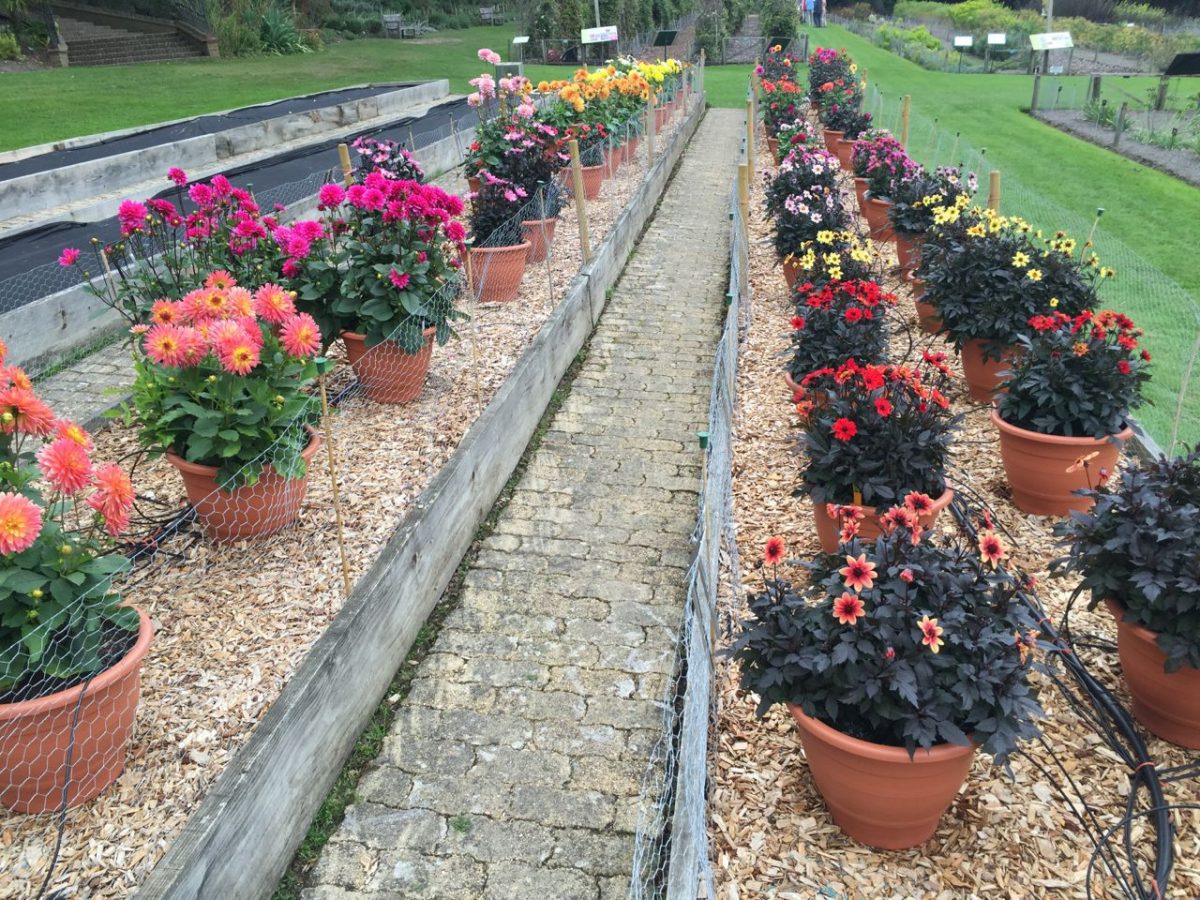 It’s like plant pick’n’mix as you can see what you like, and then later order it from specialists online. 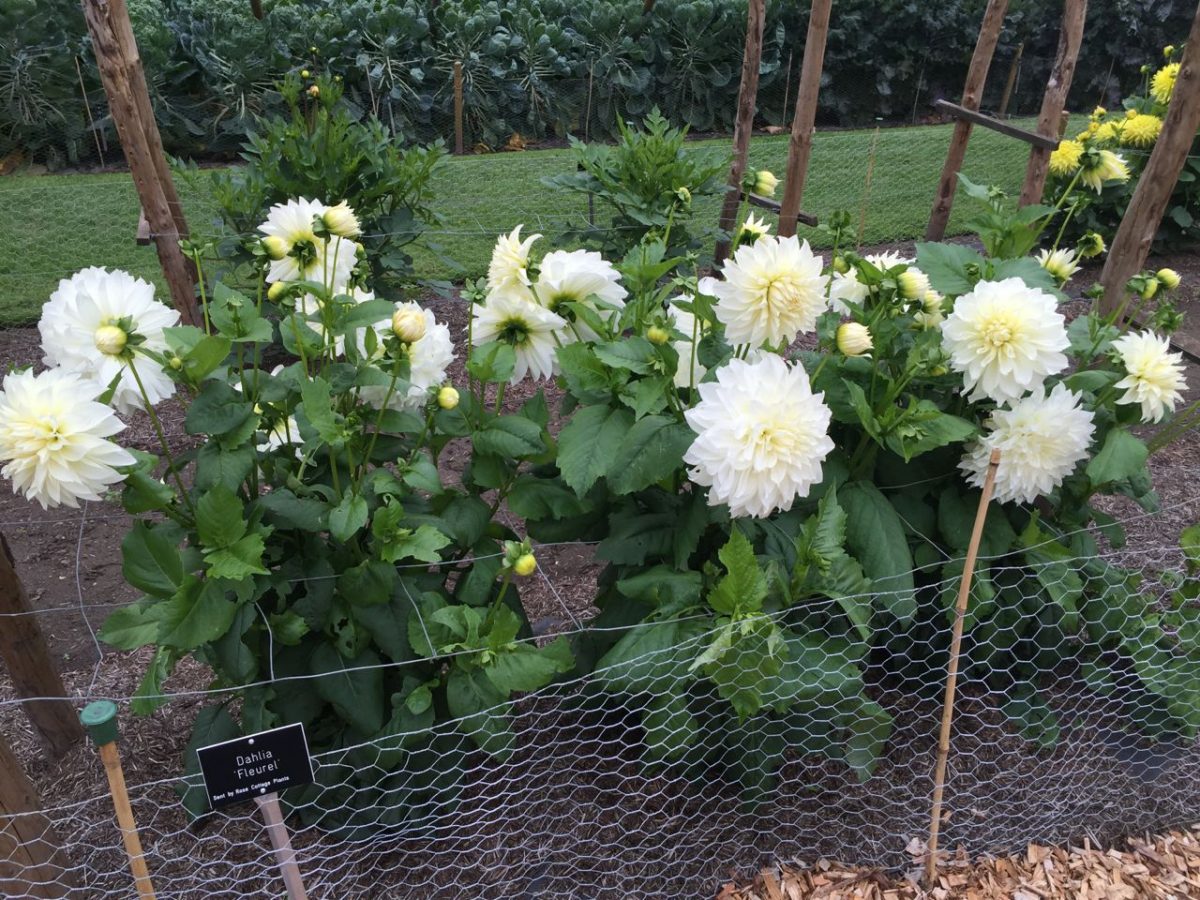 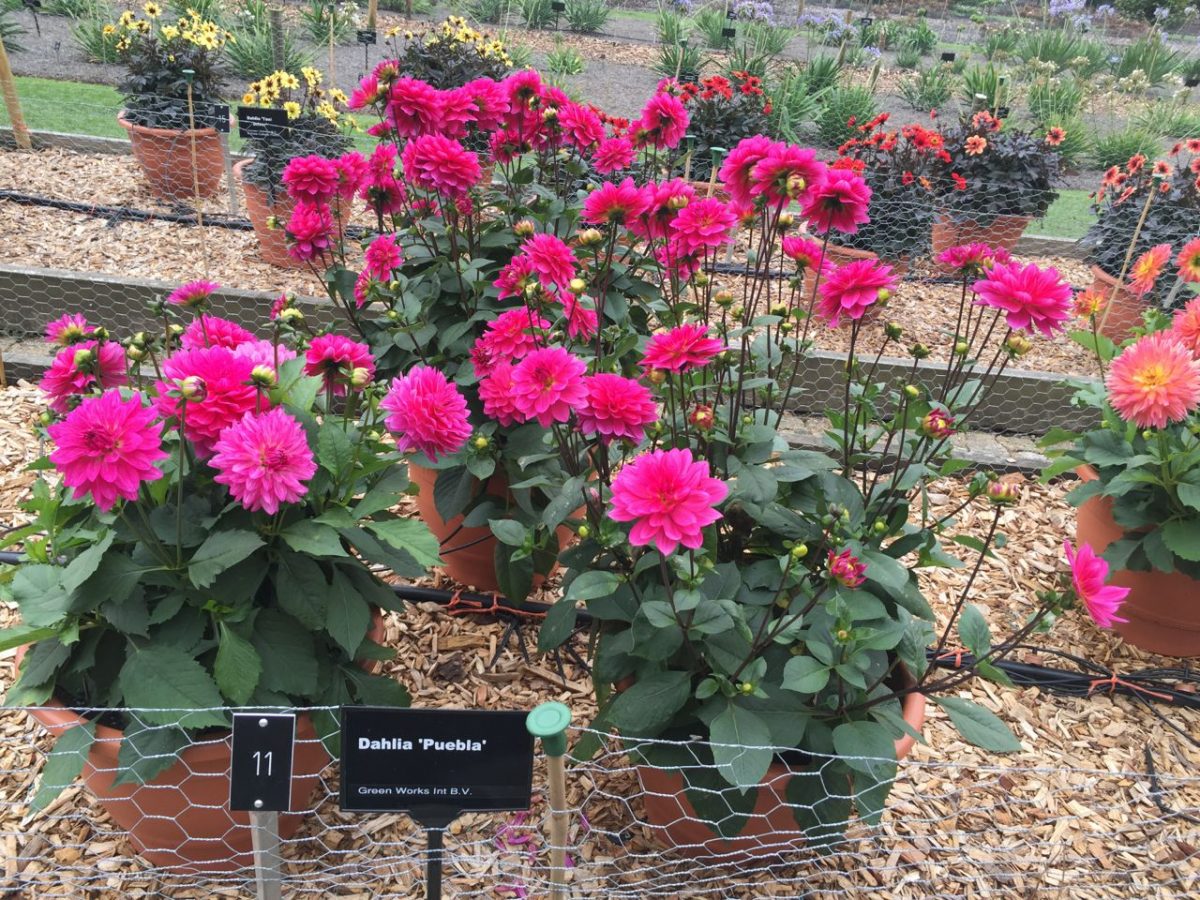 Like a child, at the moment with Dahlias I’m obsessing about the giant dinner plate cultivars. I hereby promise to become more tasteful in the future. One day…

Enough of Dahlias for the time being. Even I’ve had my fill. If you have the chance though, get down to RHS Wisley this week to see the spectacle for yourself.