Either I’m inexplicably inept at gardening, or living in the big smoke is providing a world of gardening pain that you’ll only understand if you live within the M25. That said, I do love London gardening – it’s for the fearless few, the diehard who persevere against the odds for the reward of an inner city oasis. If you’re one of these Londoners on a gardening mission, how do these match your own experiences?

“Easy!” you say, “You pop to the garden centre and just lob it in the car and…” woah woah WOAH! Let me stop you right there. What car? You don’t have a car! You live in the Big City. Where public transport is your frenemy. Perfect for everything except transporting bags of compost and manure. “No problem, order onlin”… Woah again! From where? No where online delivers compost. The select places that do charge extortionate amounts of postage. No. Your only option is to order an Uber and suffer the stress of them probably telling you to get lost with your dirty bags of horse shit. Leaving you on your knees in tears begging while clutching bin bags promising they’ll stop the leaks (all the while hoping this performance distracts from the overpowering smell).

Ah, London. City of dreams. Except of course if you’re a gardener. Because you probably don’t have a garden. In fact, you’re lucky if you even have a two foot cement window ledge sticking out of a cupboard sold to you as “a double bedroom with palatial balcony.” Nope, you left your dreams of a Capability Brown estate when you got off the train at King’s Cross. Instead, set your sights on a number of pot plants, or, if you’re one of the privileged few with a garden, rejoice in your one lonely raised bed. We do. 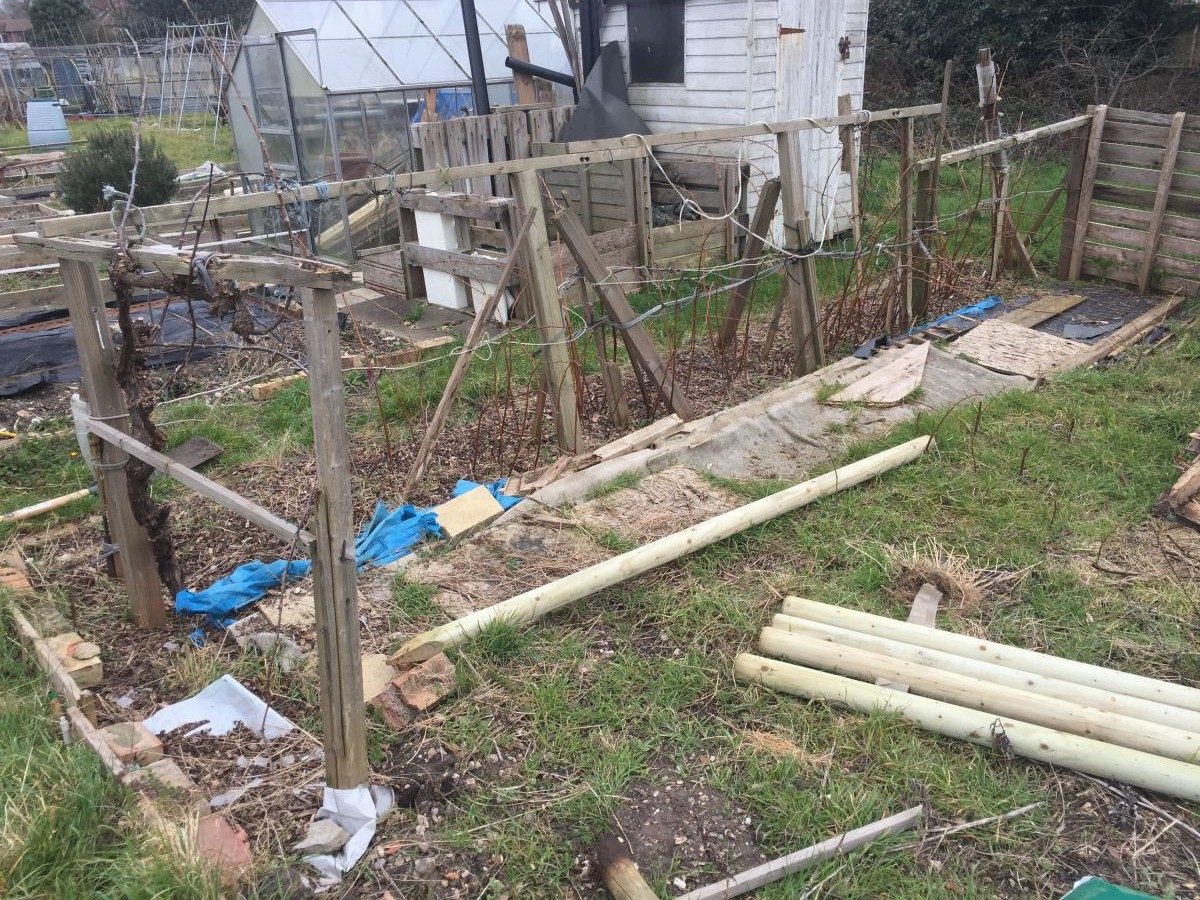 No garden? Don’t worry, get an allotment! That is of course a joke. Unless you’re prepared to wait on Lambeth’s 27 year waiting list. That part isn’t a joke. That is the real length of the waiting list. And the best bit is, the waiting list has been closed for two years and is still at 27 years. You can have an allotment in London when you’re dead. So basically, do like me and literally commute out of London to your allotment (with your bags of manure in an Uber).

If you go to a garden centre in London you’ll be presented with a vast range of five plants. They will be thus: Red Cordylines, Viburnum standards, Trays of pansies (only in mixed colours so you can’t coordinate), Pots of Nasturtiums and Box balls. Occasionally there is a seasonal special. Either a Helleborus niger or a Dahlia ‘Bishop of Llandaff’. Because there is no garden centre near you, you travel an hour to another one to find it has exactly the same selection and the Uber home is now on burst pricing.

Frustrated by the lack of choice, you’ll opt for a Nasturtium because you can’t handle any more Cordylines. You’ll look at the £3 price tag in emotionless disbelief. “Aren’t they supposed to cost 99p for an entire packet of seeds?” You’ll think. Then you’ll look at the £100 Cordyline and buy the Nasturtium. Luckily there are a few well stocked garden centres if you’re prepared to travel to them and, in this instance, online ordering is our friend.

If it isn’t a block of flats, it’s that giant tree Georgie two doors down should have pruned ten years ago. Instead now it’s a towering 30m monster with a preservation order sentencing you to a life time of Fatsia japonica and ivy.

7) You are Mary Poppins 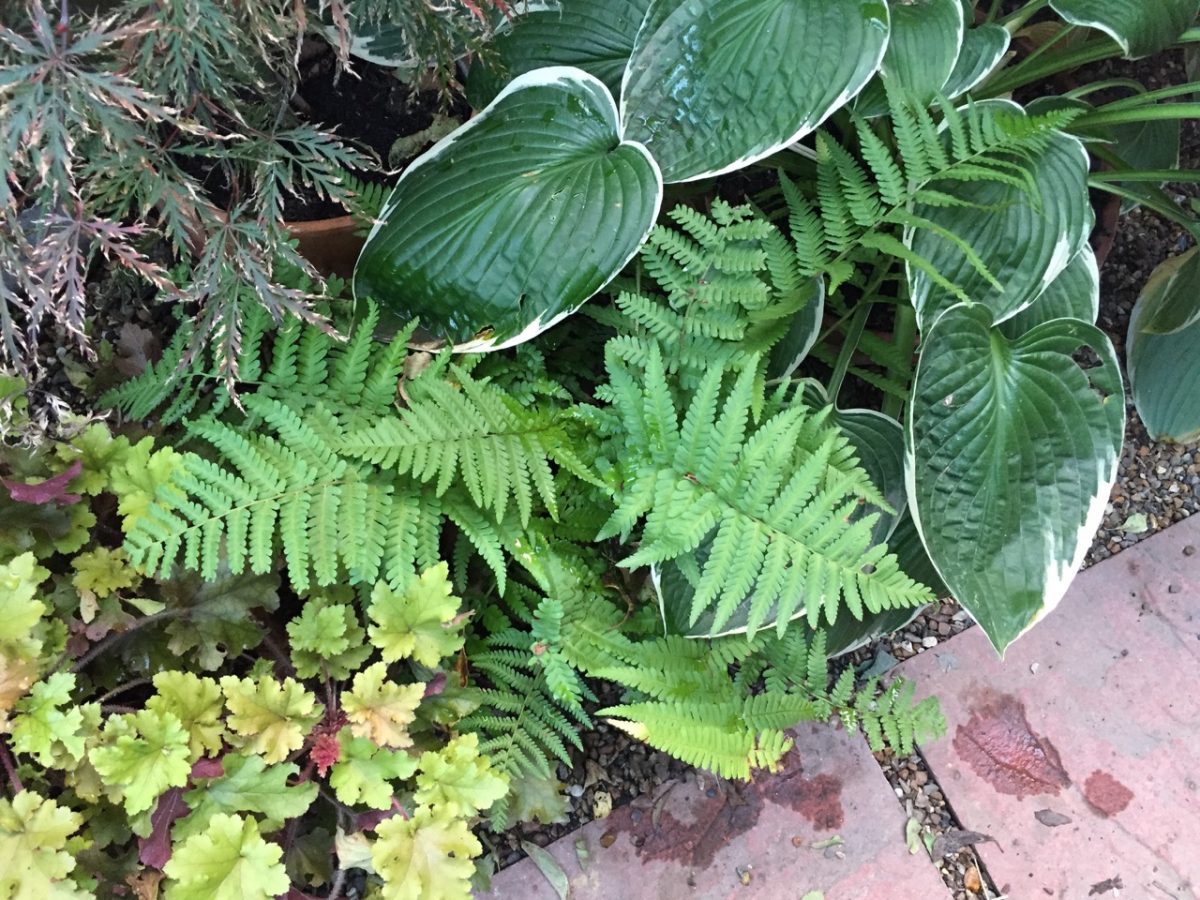 Over time, you will buy more and more plants. You know it’s ridiculous because YOU HAVE NO SPACE. Yet you do it. Inspired by a trip to Kew Gardens or perhaps further afield to a National Trust property. Somehow, you have accumulated more plants than you ever thought would be possible to fit into your garden. But you do it. Defying all rules and logic. You wonder to yourself how on earth you’re managing it (pretending to yourself that that living roof and wall is all totally normal behaviour). “No more this year” you think to yourself. Two minutes later you’ve just cashed that ‘free P&P voucher’ on another ten packets of seeds from Thompson & Morgan and think it would be rude not to look at Sarah Raven as well. 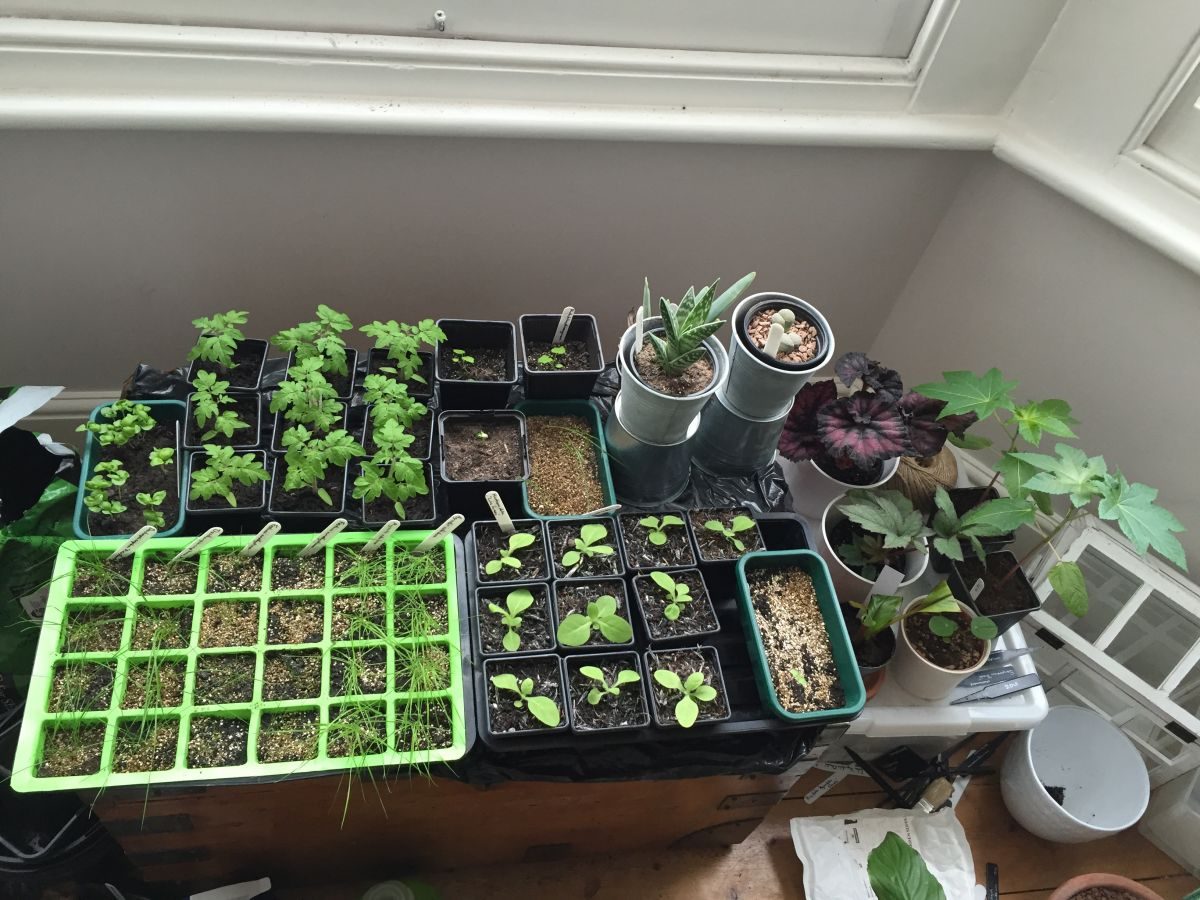 You don’t have a garden (not a proper garden with a lawn anyway) which means you definitely won’t have room for a greenhouse. So in spring your windowsills are like the Amazon rainforest and your partner or housemate’s sanity is pushed to the limits. You repeat the lie “it’s only for a month” in increasingly less convincing ways until “month” comes out in such a high pitch squeal you shatter a wine glass. 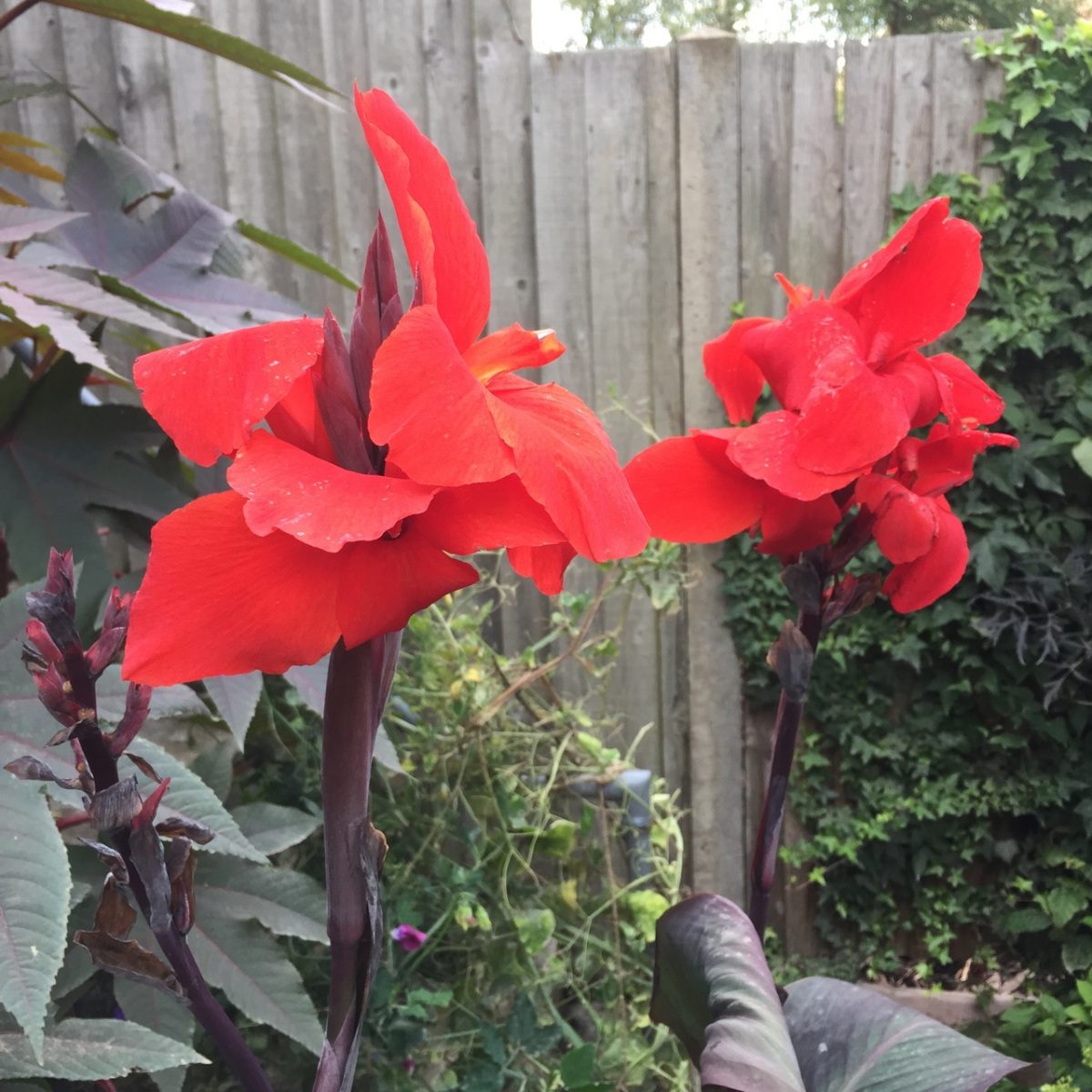 In the last two years I’ve noticed the temperature in winter in our garden has barely dropped below 0 C. Lo and behold, tender plants that should not survive the UK winter so easily (Ricinus, tender Fuchsias, Dahlias and Cannas) barely bat a petal. Our climate is unique and cosy for plants thanks to the shelter and heat created by buildings. Londoners can grow many more plants a month or so earlier for a month or so longer than anyone north of Birmingham. Visitors will marvel at this voodoo witch craft.

RHS Chelsea, NGS gardens, front gardens, indoor plants, balconies, Kew, Chelsea Physic Garden, new world contemporary office gardens, community gardens. Let’s face it, we’re spoilt rotten for gardening inspiration. Nowhere else have so many people thought more creatively about squeezing gardens into spaces most people outside of London step over on their way to the garden. When you think it about it, you almost don’t even need a garden when you can live in a constant bubble of visiting someone else’s and pretending it’s your own. 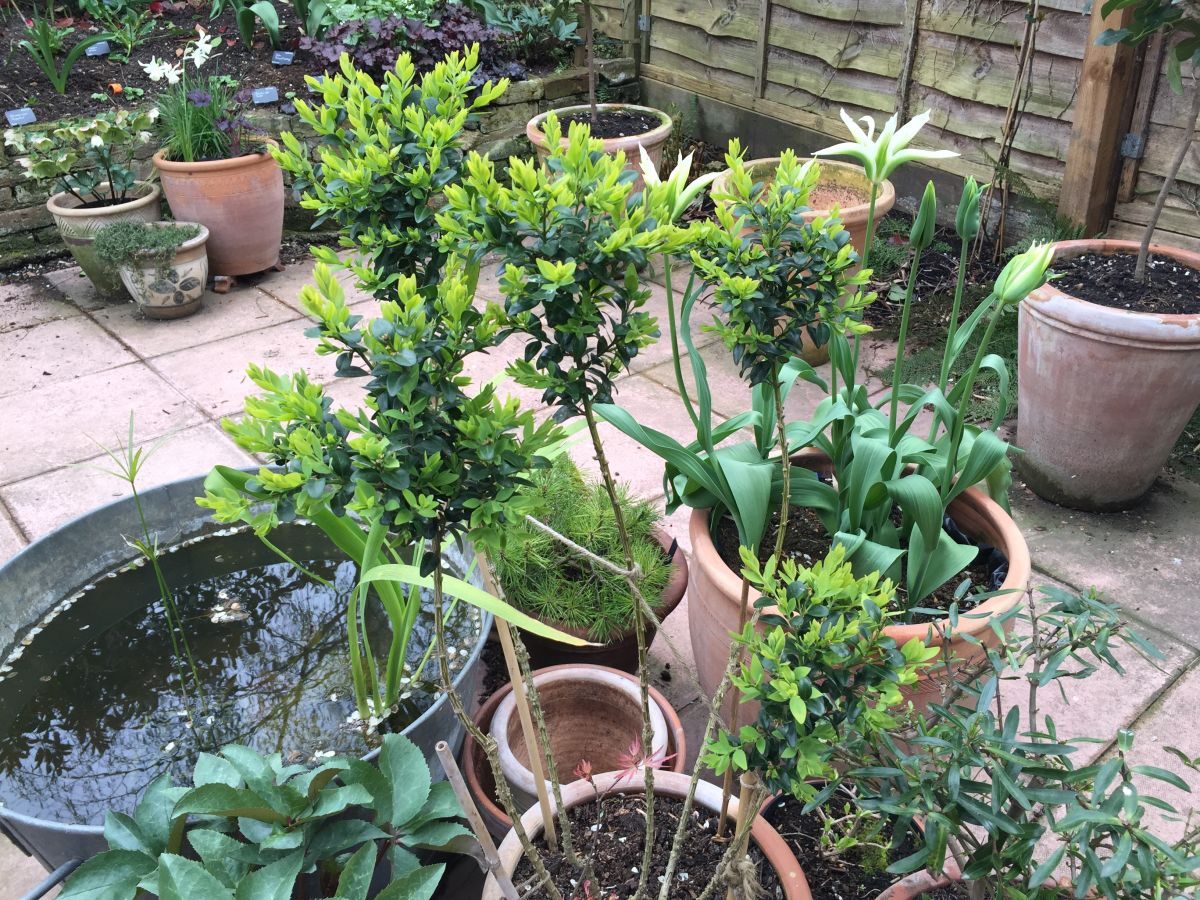 Despite the challenges, on a summer’s day, you’ll survey your estate (aka a pot on the windowsill / balcony / yard) and the slug eaten greenery you’ve kept alive. There might be aeroplanes overhead and sirens as Georgie is arrested for trying to cut her tree down, but there are also flowers and there is definitely a Robin popping in to see you. People will look on in wonder at this person with magic green fingers as their dead moth orchid from M&S catches their eye again. And despite the fact you have no money left from buying the stuff needed, have a bad back from carrying the compost through the house, and that you’ve put more effort into getting all of the equipment for one pot plant than any normal person would for an entire acre of land, despite all of that, you’ll be smug in the knowledge that you’ve beaten the odds to turn your little bit of grey concrete back into the green forest it used to be.

11 thoughts on “11 Realities of Gardening in London”