Something about Autumn and Spring make them feel much the same thing. Soil is damp and warm again, leading to a sudden burst of growth from weeds. This surge of energy – seen too in the wanted plants – is what helps many fruit and veg ripen and hardy veg seeds to germinate now ahead of a spring crop.

It’s almost time to put the allotment to bed for winter, but there is a final sprint to run before that happens.

I’m growing three different stepover apple trees. I should have done this earlier in the summer, but I’ve snipped back some unwanted branches now (e.g. one had two lateral branches on one side). I do this now while the plant is still in growth to restrict its shape. If I were to do the same in winter, it would promote stronger unwanted growth. So far, these three apple trees look exactly as I had hoped. Fingers crossed for some apples in 2017! 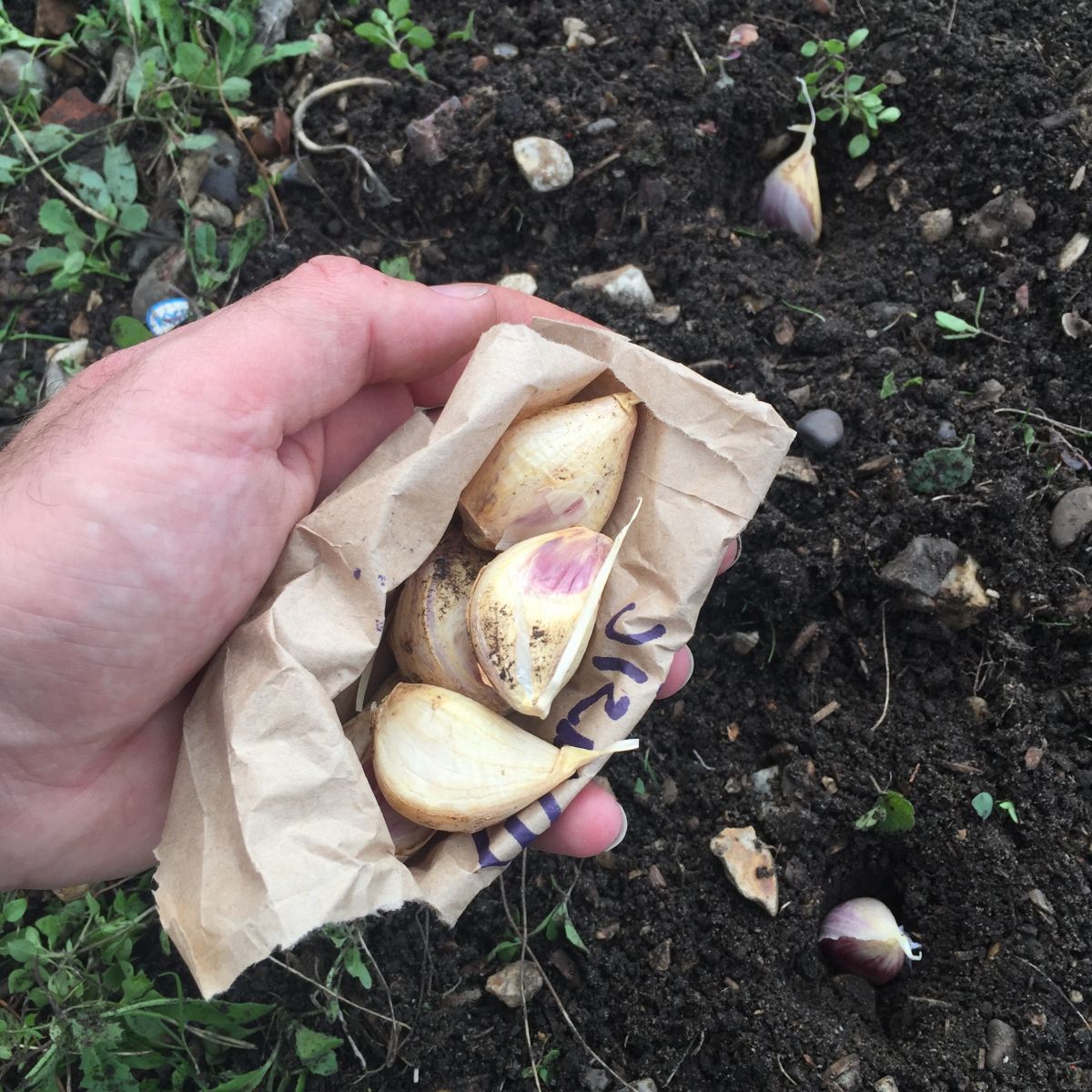 I feel very lucky to have been given some garlic cloves by fellow blogger Julieanna Porter. The cultivars are ‘Music’ and ‘Rosewood’ and I have to say, the cloves looked beautiful and plump. I hope I do them justice. 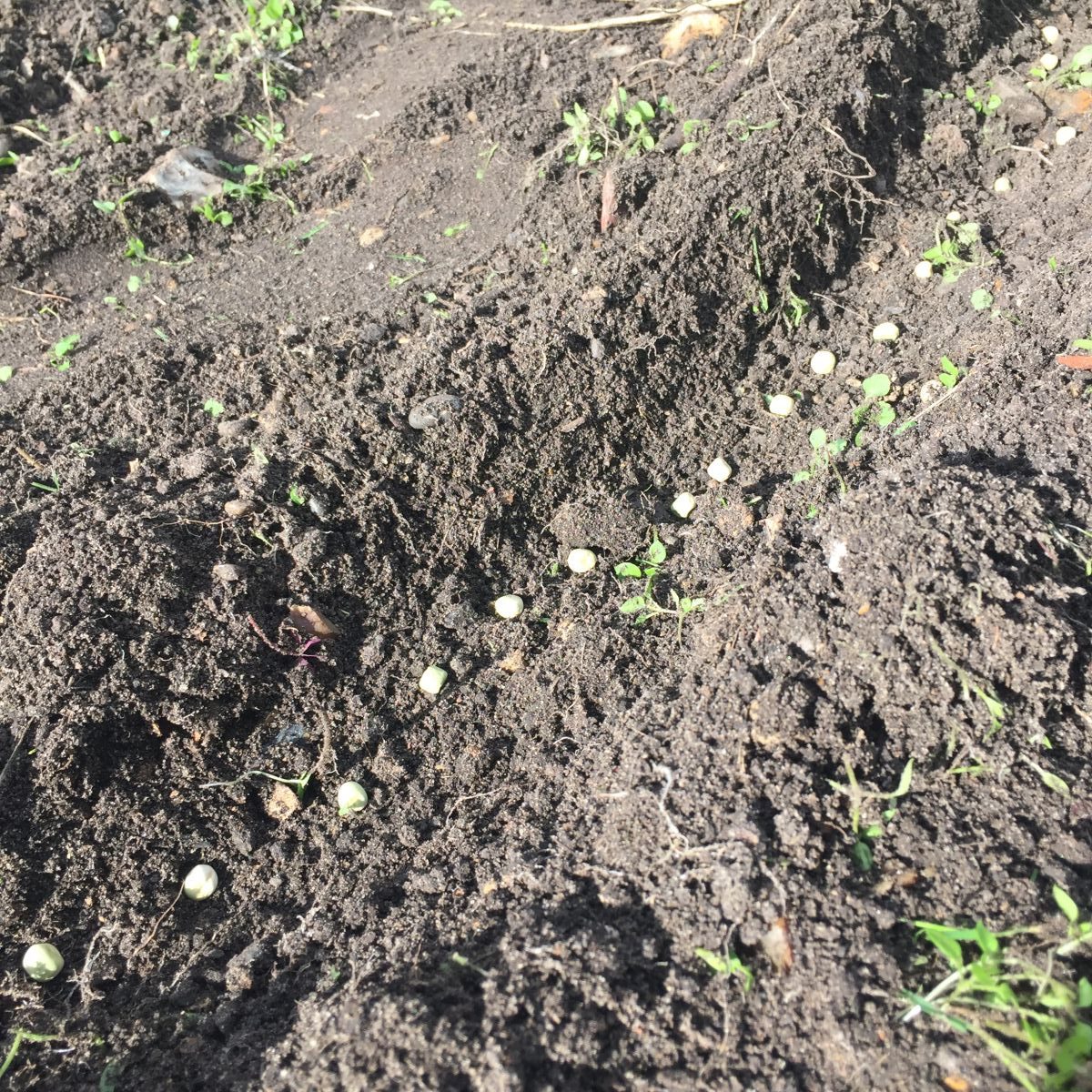 Now is the time to sow overwintering peas and broadbeans while the soil is warm and they can germinate quickly before the mice eat them. My tried and tested cultivars are the fairly common Pisum sativum ‘Meteor’ pea with its lovely white flowers, and Vicia faba ‘Aquadulce Claudia’ broadbean. I’m going big, big, BIG with the quantities this year, sowing far more than I ever have before. 8 rows of peas and 4 rows of broadbean. Simply because last year there weren’t enough, and I love both. The broadbean seed I am using is from my own plants this time, so we’ll see how they get on. If they don’t germinate in the next week or so, I’ll buy a pack instead and get them in quickly. 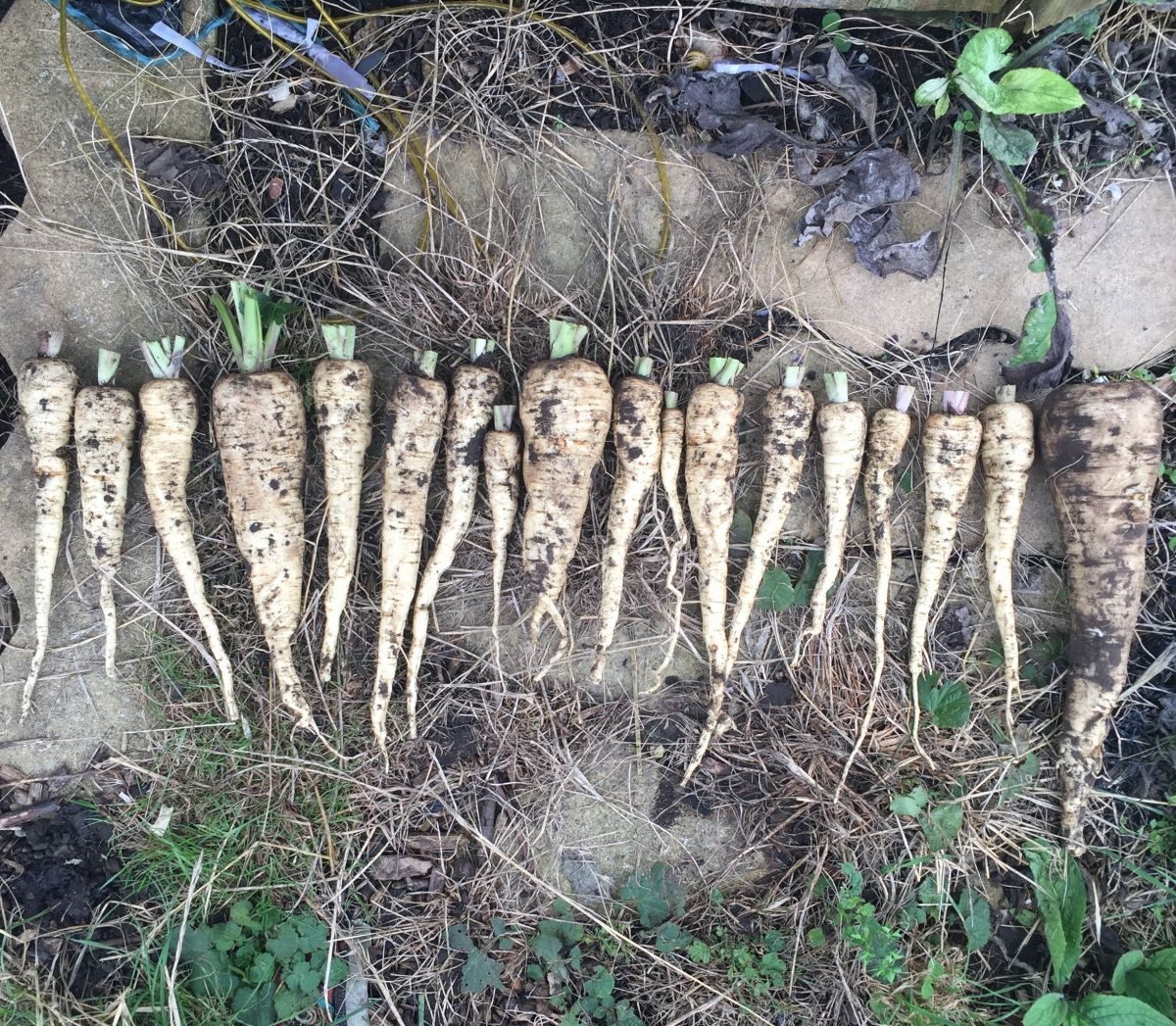 I had good germination success with my Pastinaca sativa ‘Gladiator’ parsnips this year. In a momentary lapse of concentration / stupidity and excitement, I dug them all up today. Really, I should have left them to overwinter longer in the soil until ready and to let the frost sweeten them up. Never mind. I’ll par boil them and freeze instead. Next year I will plant more as we love parsnips and this little lot won’t see us the whole way through the winter.

As winter approaches my mind turns to mulch. I’m covering the unused beds with weed suppressant matting until spring. In the next month or two, I’ll also be attempting to bulk buy enough manure to cover many of the beds as well, ready for the spring planting. I don’t dig my beds, just let worms do the work for me.

My Dahlia trial ground has done well this year. The plan was to test out new varieties before selecting them for our garden, which I have done. It’s also been a fantastic source of cut flowers. I’ll be expanding this by another row next year after ordering another 15 new cultivars for 2017. I’m going to leave mine in the soil to overwinter, although I will be getting rid of some of the plants I am less keen on. 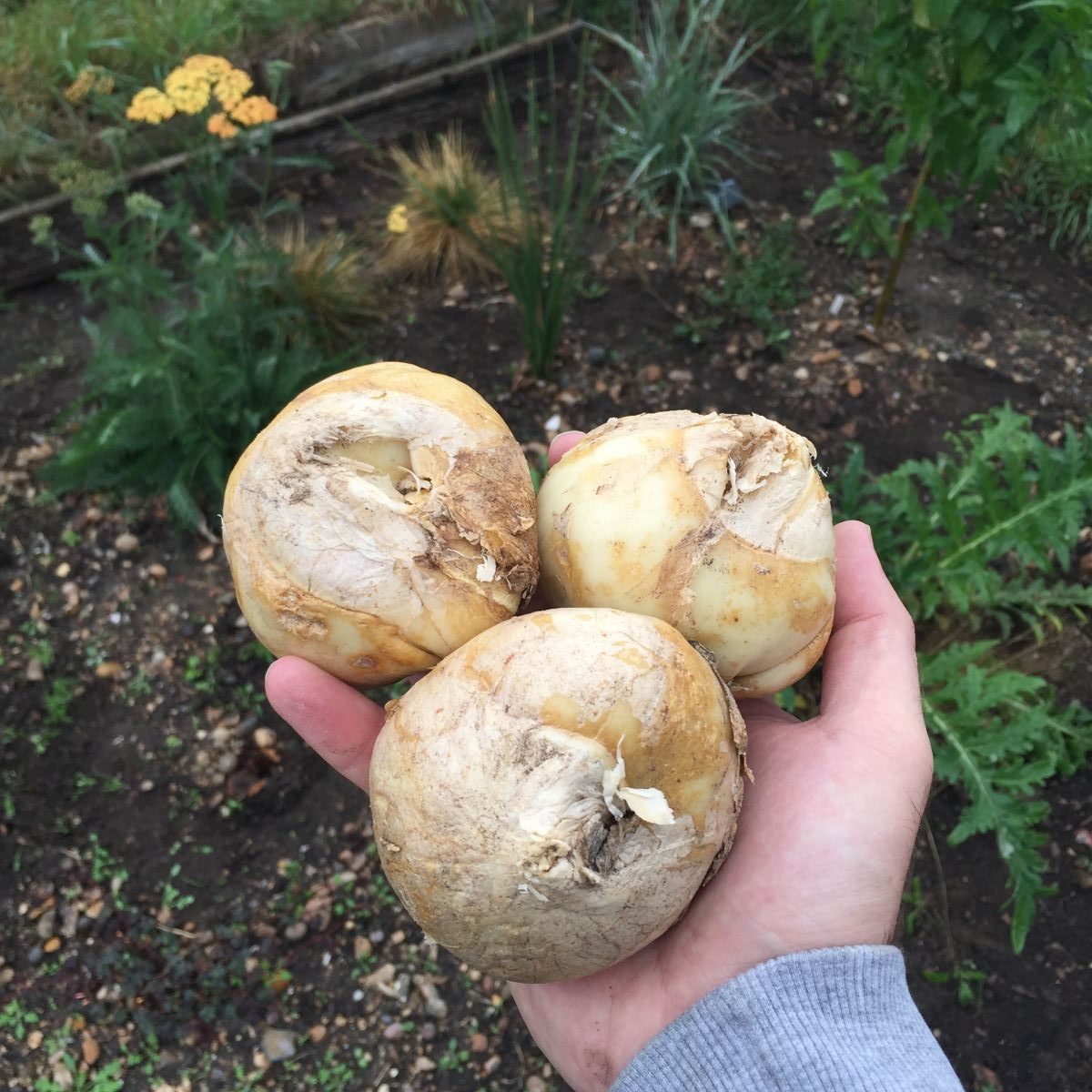 Look at those whoppers! Fritillaria persica have some of the chunkiest bulbs I’ve come across. They’ve gone into my plant-community-cum-prairie-future-thing I’m experimenting with in my allotment’s design area. Now is the time to plant bulbs and new perennials, which I’ve done. Tulips will go in later in November. I’ve also sown more Papaver somniferum which, despite having a nightmare getting to germinate this year, are now growing nicely. 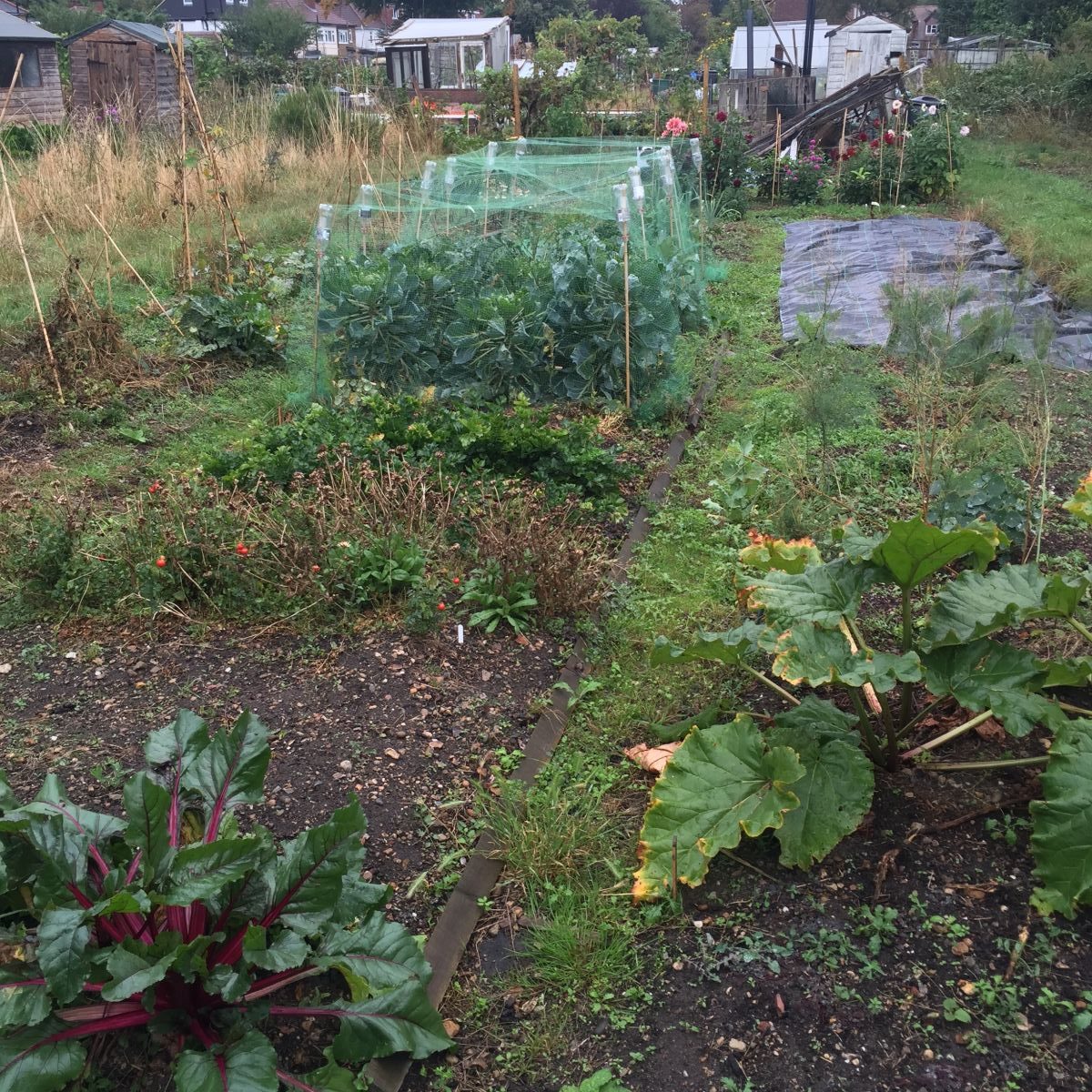 I forgot to sow spring cabbage so settled for six plugs of red cabbage, which I planted today. I also have a variety of other brassicas, like Brussels, Broccoli and Swedes under a simple netting in the central bed. This has done fairly well to protect them, although one cabbage white butterfly somehow managed to lay eggs on them.

Other than that, it’s all about battening down the hatches now and beginning to reflect on the last year to improve in 2017. I’ll jot some of my thoughts down over the coming winter months.