I’ve hit month 36 in my allotment journal which means I’ve now had it, almost unbelievably, for three whole years! I remember first setting foot on it like yesterday, yet here we are.

I’m proud of what I’ve achieved so far on the allotment. Gazing out across my vast lands, I can see the new mini orchard and herb beds are now bedding in nicely following a tough first summer and the rest of the vegetable beds have produced more this year than in any year before. Like the netting on my brassica bed, nothing is ever perfect but using only my own two hands and a couple of hours a week alongside my job, as long as Chris and I have some food to show for it, I’m happy. 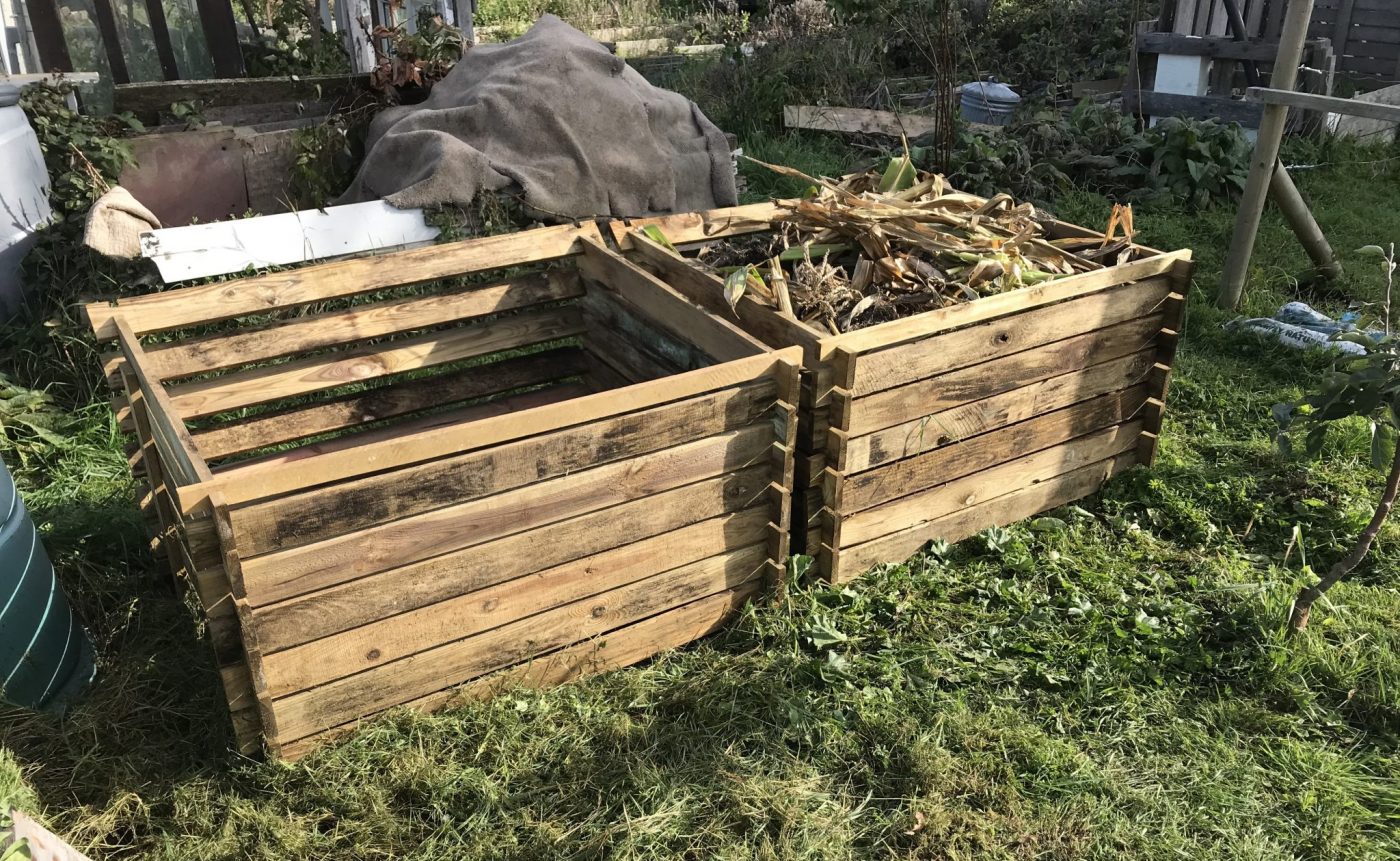 My babies! For three years I’ve wanted proper compost bins and look! I finally saved enough to get some flat packs, after trying hard and failing to get enough pallets to the plot – not an easy task without owning a large car or van. Anyway, now I have some boxes of wood that will take the waste from my plot to become homemade compost. I have been using the plastic bins councils give away for free but I really don’t find them large enough to produce good compost. Making compost is exciting – it’s like unlocking some kind of life secret.

The mini Aubergine ‘Pot Black F1’ I grew this year are a revelation, producing a good crop all through summer right until the end of October. I’ll be growing these again. My new autumn raspberries have been doing their thing with a slow but unstoppable trickle of fruit in their first year. I’ve been eating them on the plot as there aren’t enough to take home – next year we will have plenty. My celery I’m leaving in the ground after it was stunted in the drought. As it’s trenched I’m hoping it will be OK in the cold weather enough to bulk up.

Growing garlic is somewhat romantic to me, those papery skins, its beautiful addition to meals. Unfortunately consuming them kills all romance with the garlic breath but the fact it tastes so good and is proven to be healthy for you means I am totally into it this year. I’ve always grown various types but this year I wanted to give it more credit and attention so I’m growing eight rows of four different cultivars of garlic. The flavours are noticeably different between them all. There is just time to plant some if you haven’t already. I could list the names but really, I suggest you grow a bunch and see what you like. They all taste garlicky, it’s a very subtle flavour difference, a bit like wine tasting without the hangover. 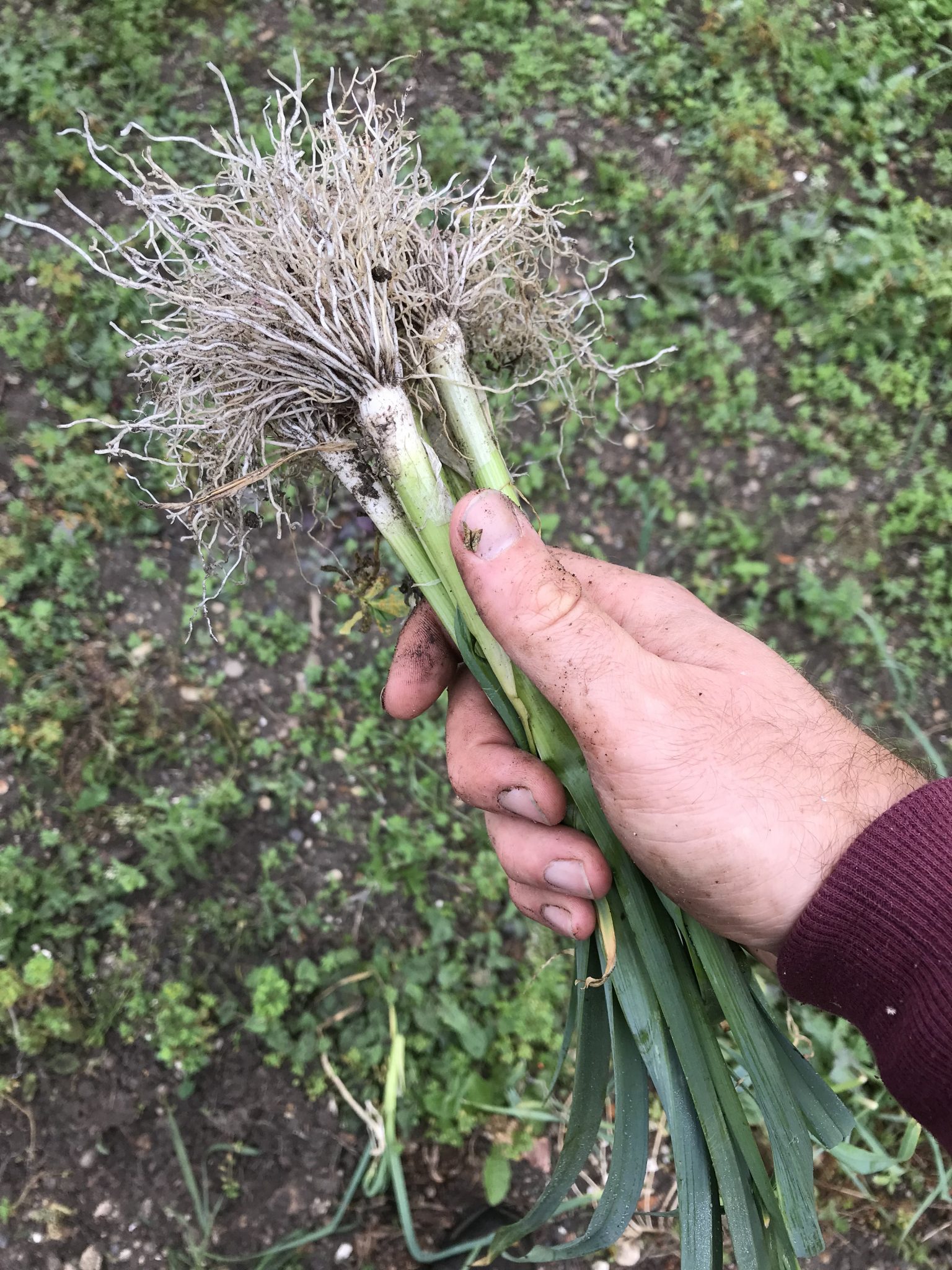 I really enjoy leeks. Most years I grow a variety that can be eaten small and young. Next year though I plan to grow a full sized crop.

Brassicas, normally my most trusted of crops and real stalwart on my allotment. This year however I was bested by the drought which kicked in just as I planted out my seedlings grown at home. I missed a window to grow more and so I’ve been left with half of what I sowed, very disappointing. That said I have been lucky this year to have a good crop of three different cabbages, including mini savoy type ‘Caserta F1’ and a beautiful new Kale ‘Red Devil’ I will certainly grow again. Both for their flavour to complement those looks. I am gutted that my sprouting broccoli this year is the one that suffered worst and my Brussels exist but only three plants.

I’ve loved the root vegetables on my allotment for their hearty flavour, especially carrots which to me taste radically better grown yourself. I tried a number of varieties this year but have come back to confirm the types I grow regularly are my favourites so I’ll branch out less next year. ‘Resistafly F1’ sounds horrible because of its carrot fly resistance but tastes beautifully sweet.

If you follow my writing you’ll know I’ve been expanding my knowledge of edible flowers and herbs, particularly those that genuinely (i.e. scientifically proven) have nutritional or health benefit. One such plant is calendula which I mainly grow for its wildlife benefit but also for its quite tasty petals. You can’t eat too many of the petals at once or you might feel a bit unwell, not that you would eat lots because they’re quite faffy to use. However, trimming some into salads or soup with scissors adds their lovely peppery taste. 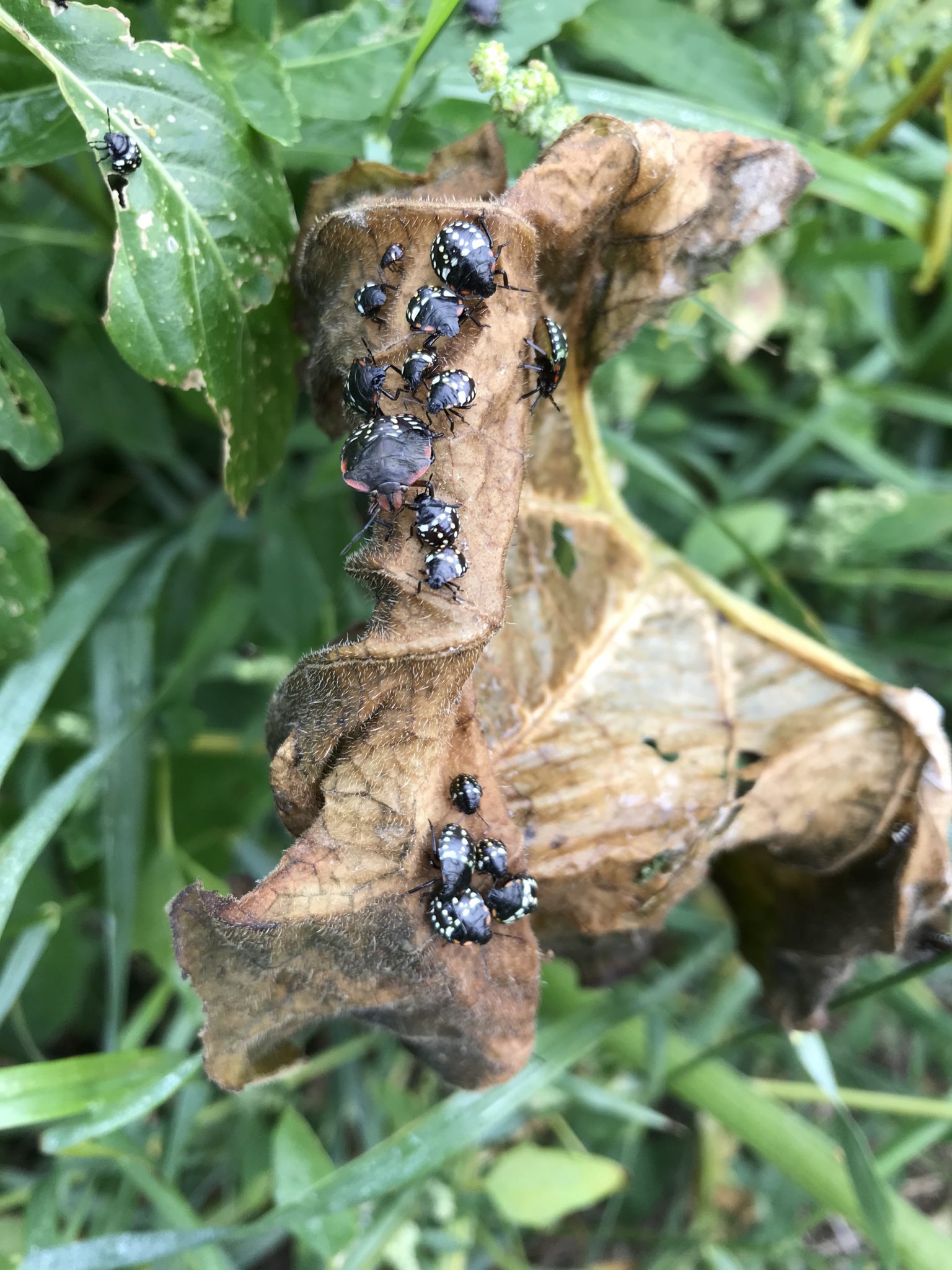 Recently I was confused to find these black bugs all over my allotment – really, everywhere! On every single plant. I’d never seen them before but my Twitter crew reliably informed me that they are the third instar of the green stink bug. They don’t really do anything but disturbed they do make everything stink! I won’t worry about them for now as apparently while feeding off plants, they don’t really do much damage. I just hope the natural predators – whatever they may be – show up for next year otherwise you’ll lose me beneath a sea of them. 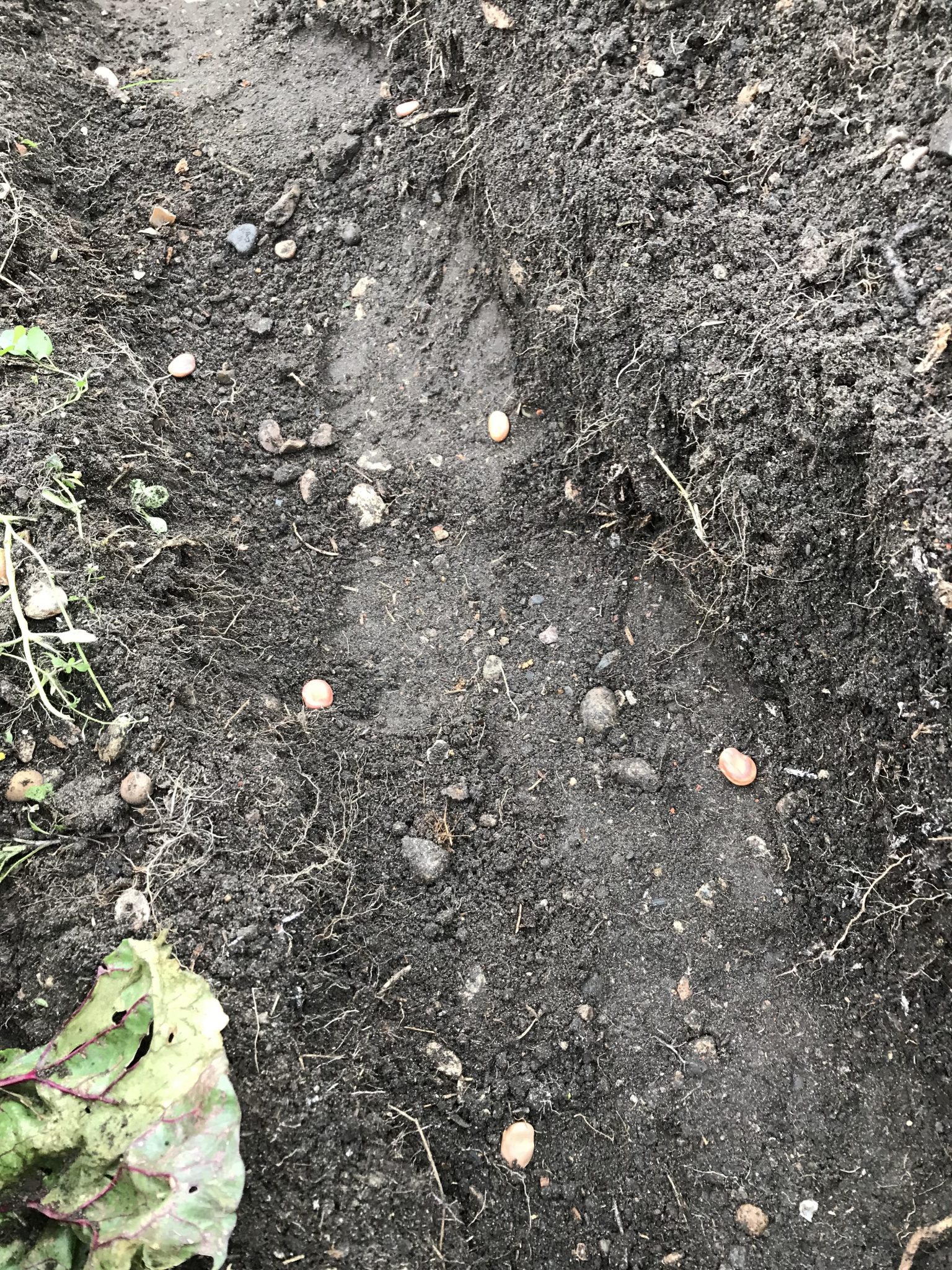 As has become ritual I have now sowed lots of broad bean seeds on the allotment to overwinter for spring, plus at home I am growing peas to do the same. I sow peas at home to establish young plants before planting out otherwise they simply get eaten by mice eating the seeds or slugs eating the tiny new shoots. 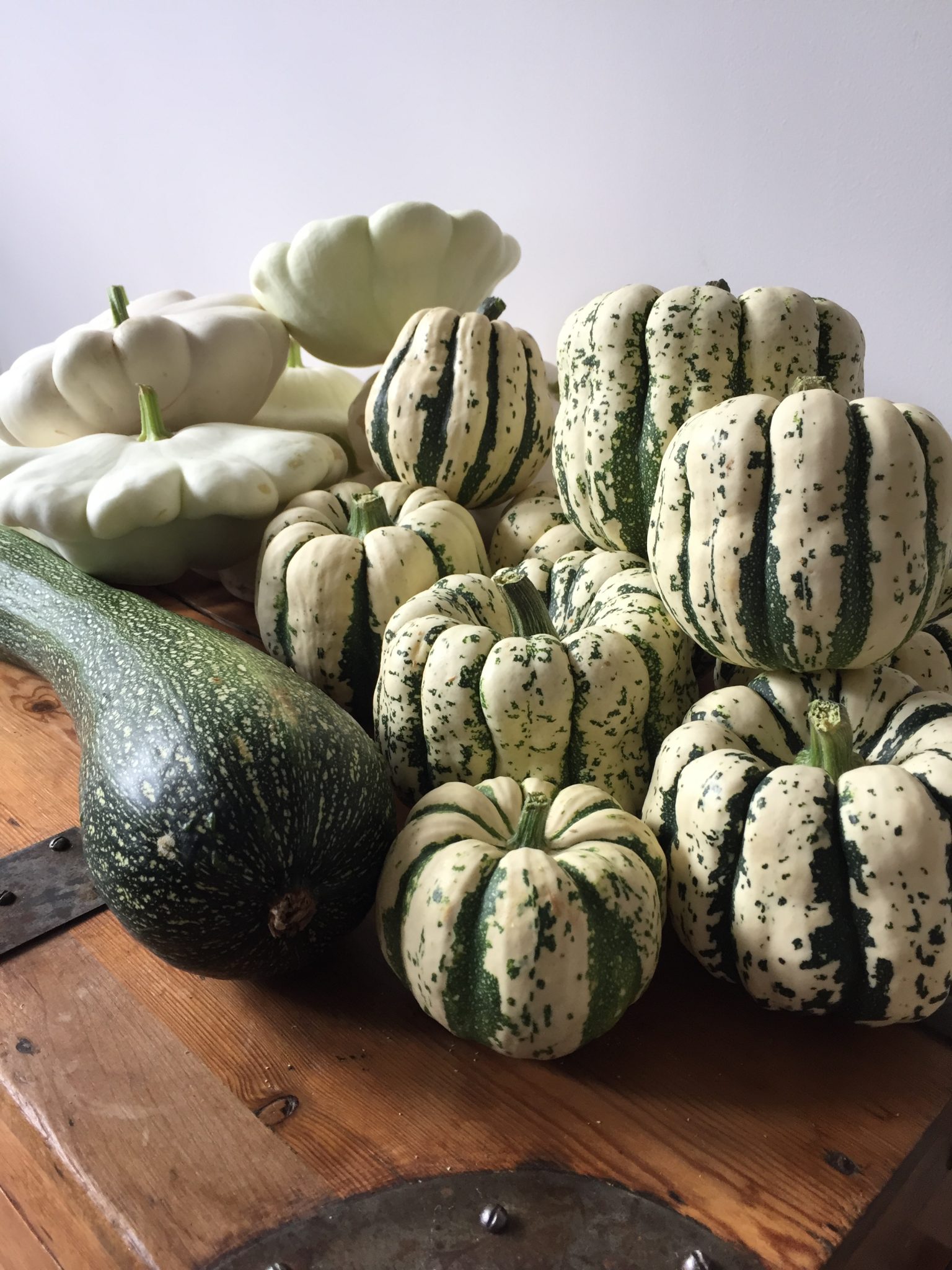 One of my happiest crops in summer despite the drought was summer squash. I loved the fruits eaten young (though Chris didn’t) but once they become large they are quite unpleasant in texture. With so many abundant fruit I’ve ended up with a pile spare which have become home ornaments (ignore the courgette as this photo is a month or so old).

Trying my hand at preserves 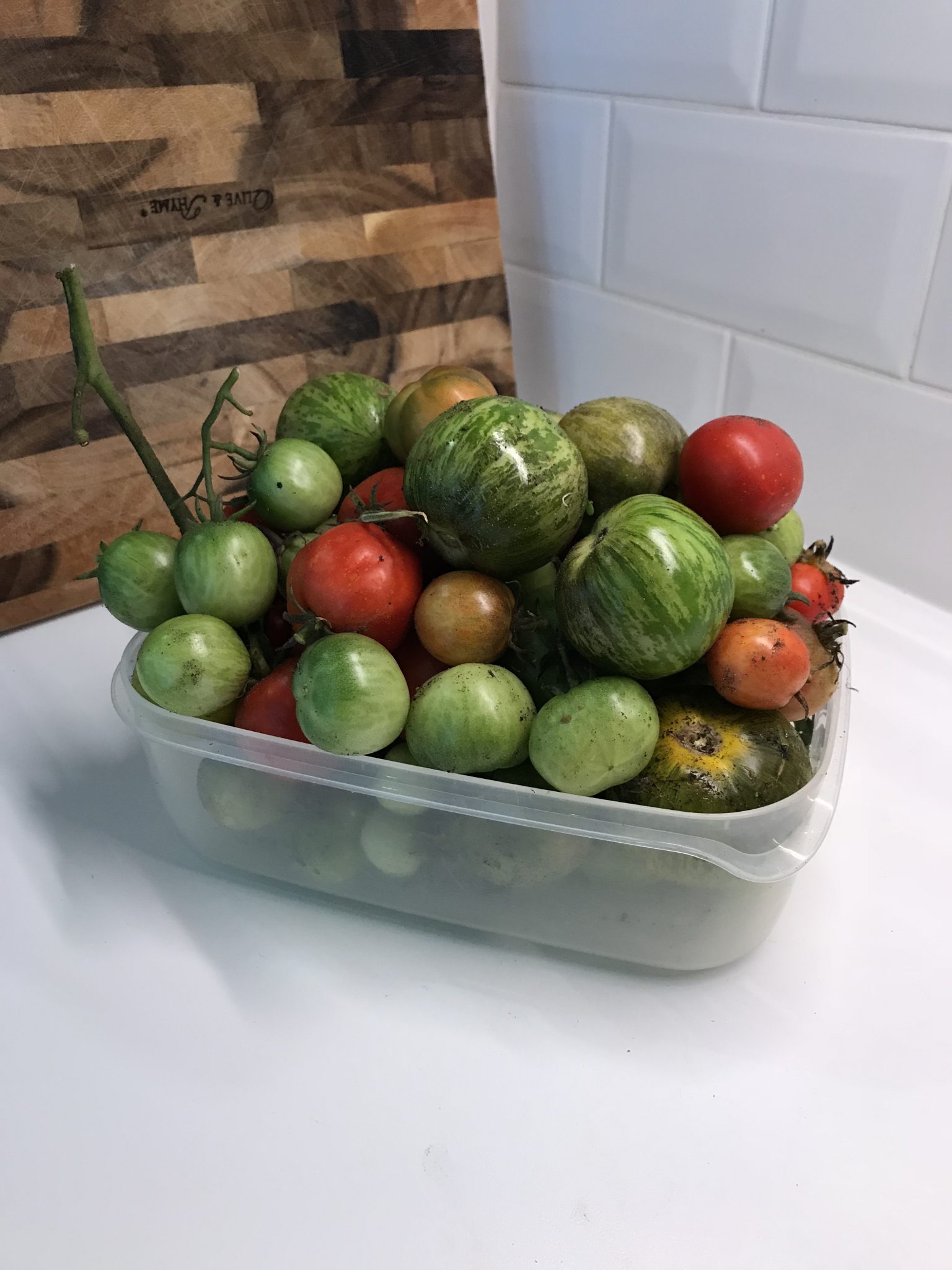 It was a strange year for my outdoor tomatoes. We ate a lot of them but we could have had three or four times as many with more rain because the drought caused a lot of blossom end rot. However toward the end of autumn with the rains, many fruit set but didn’t quite ripen. I used this opportunity to try preserving a lot in some unripe green tomato chutney which is tasty. I also ripened some in a Tupperware box with a banana. Whether the banana is necessary seems to be an enjoyable debate. Mine certainly ripened… thanks to the banana or not I’ll never know.

You can also read my practical ‘grow to eat’ guides every week in Telegraph Gardening on Saturdays and online.