Monarda didyma ‘Cambridge Scarlet’ can be seen flowering in our garden in the above photo (2015) and below (2018). This year, one small plant I grew in a 2 litre pot from last year’s plant, then planted out this spring has about eight flowers on now with more on the way. I gave it the Chelsea chop in May causing it to branch, the flowers no smaller in size than normal.

Monarda are one of those plants that currently feel overlooked for various reasons: they’re lumped in the prairie style category, they’re quite hard to grow and I expect few people look at them close up, instead on mass.

I’d suggest it’s worth looking again because their flowers are quite exotic and their scent from brushed leaves is divine. It’s a plant I’d love masses of. You can use the leaves in desserts, cocktails and to make a nice alternative to tea. They smell and taste like a fresh, sweet Earl Grey. 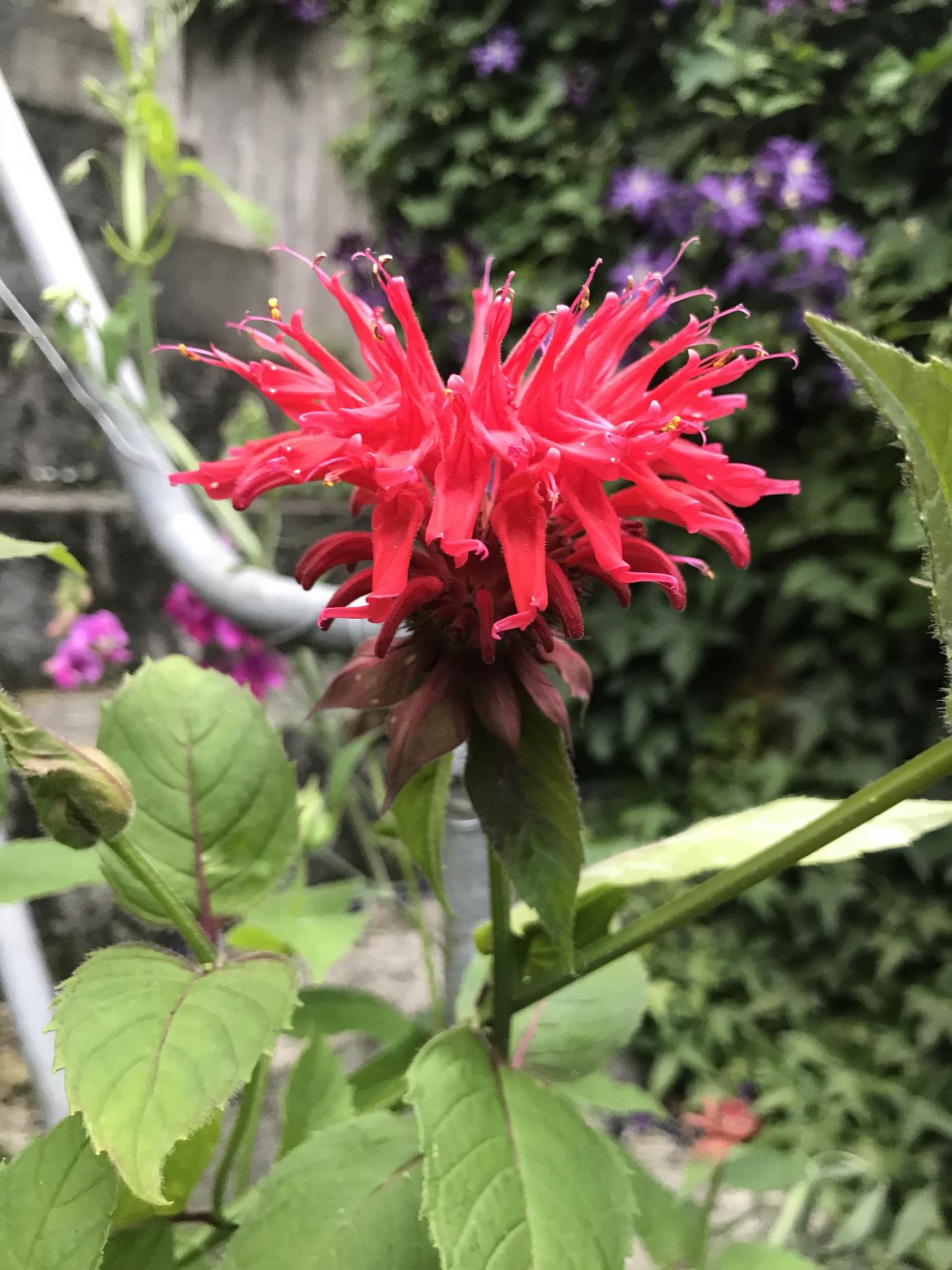 Monarda is quite hard to grow as it never lives long, you have to create new plants from runners each year really, or let it sprawl where it wants. Sprawling isn’t ideal in a small garden so I cut a rooted runner in late summer after flowering. Plonk in a pot of normal peat free compost, keeping it damp in mostly shade.

Related to mint in the Lamiaceae with many of the same habits, this tells you something of how it grows. It comes from North America however where in some areas the summers can be hot and dry. People often complain that Monarda gets powdery mildew a lot. There are now cultivars available that are more resistant. These are often short dwarf cultivars which to me takes away something of the plant’s natural stature. I’d love a professional botanist to explain the reason for a smaller plant being more resistant, is it simply the fact a smaller plant needs less moisture or struggles less with the transpiration process moving water up its stems?

I grow Monarda in part-shade, not full sun and I never let it dry out. My ‘Cambridge Scarlet’ is yet to have powdery mildew in five years (touch wood), I believe thanks to these conditions and by rejuvenating the clump each year with a new, vigorous young plant.

They flower from around late-June here in London, lasting for 6 weeks or so. You can chop off the spent flowers and more will grow, however I find this later flush to be smaller and not really worth the bother. Especially as their seed heads look quite interesting in their own right. Many now leave them standing over winter.

Colour wise, there is a huge variety with ‘Scorpion’, ‘Prairienacht’ and others for purple and ‘Schneewitchen’ in white.

Monarda ‘Cambridge Scarlet’ was one of the first plants I introduced five years ago in a time when our garden had many more red flowers in it. I often think I should replace it with a purple flowered Monarda to fit better with the other plants but I haven’t the heart to get rid of it.

One thought on “How to grow Monarda didyma”