It’s mid-November and some of our Dahlias in the garden are still flowering, just. This follows an absolutely epic windfall of flowers back in the mild October sunshine I jokingly dubbed #dahliageddon on Twitter. The Telegraph’s Alice Vincent quickly and correctly capitalised the entire word to DAHLIAGEDDON and wrote about it all in this article featuring lots of our Dahlias (which was frankly awesome). 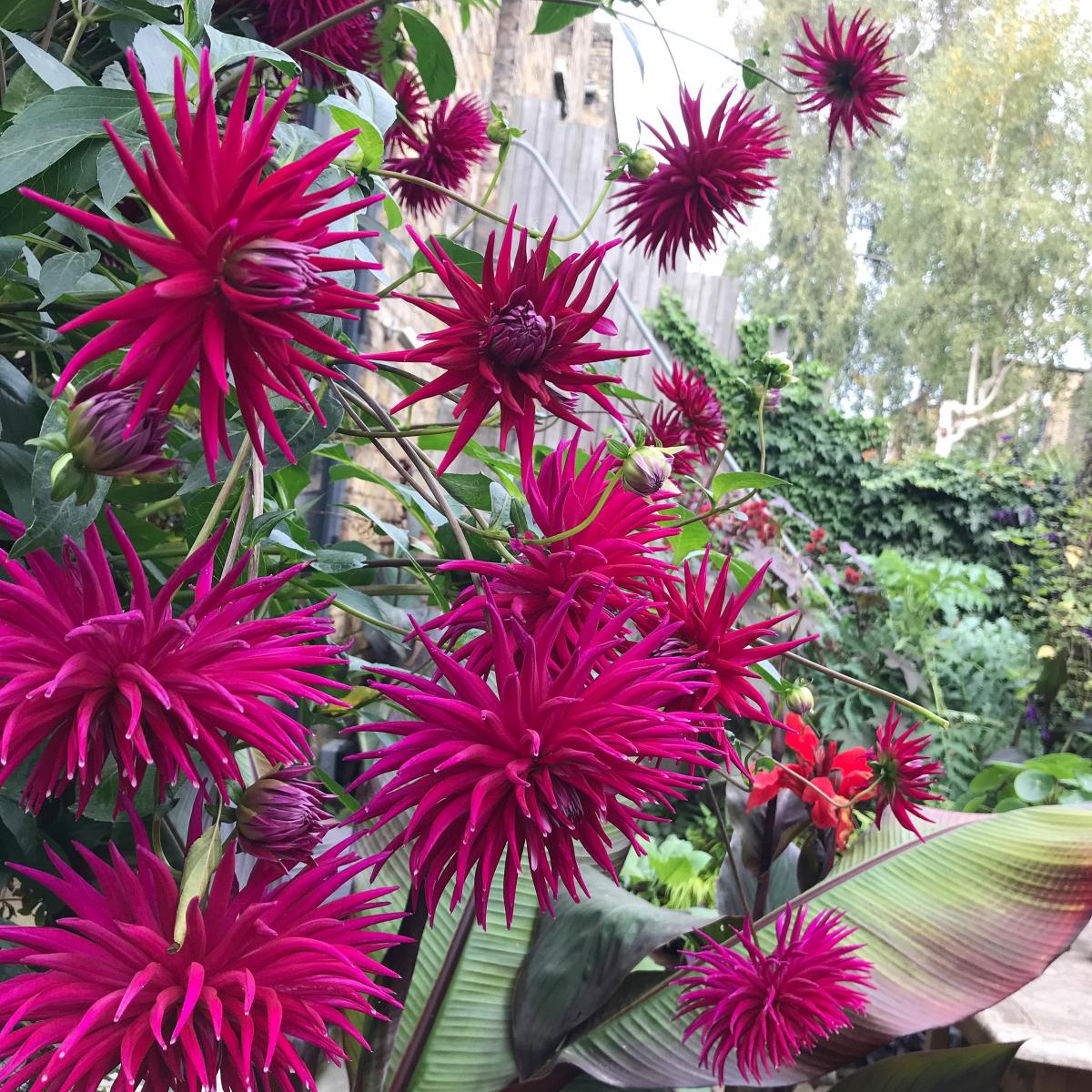 The truth is, Dahlias aren’t for the faint hearted. They’re faffy and if you do them properly, they’re brash and… well, they’re very brash. Faffy and brashy, a combination that saw Dahlias banished from gardendom by the Taste & Effort Police for the best part of three decades. Let’s, dear reader, explore this further for a moment.

Faffy McFaff Face should be the new name for Dahlias. People say “they’re easy to grow”, and in some respects that’s true – boy do they like to grow – but in lots of other respects they’re not easy to grow at all. To grow Dahlias well, they’re the biggest faff in the garden. Look at this get up on my allotment… 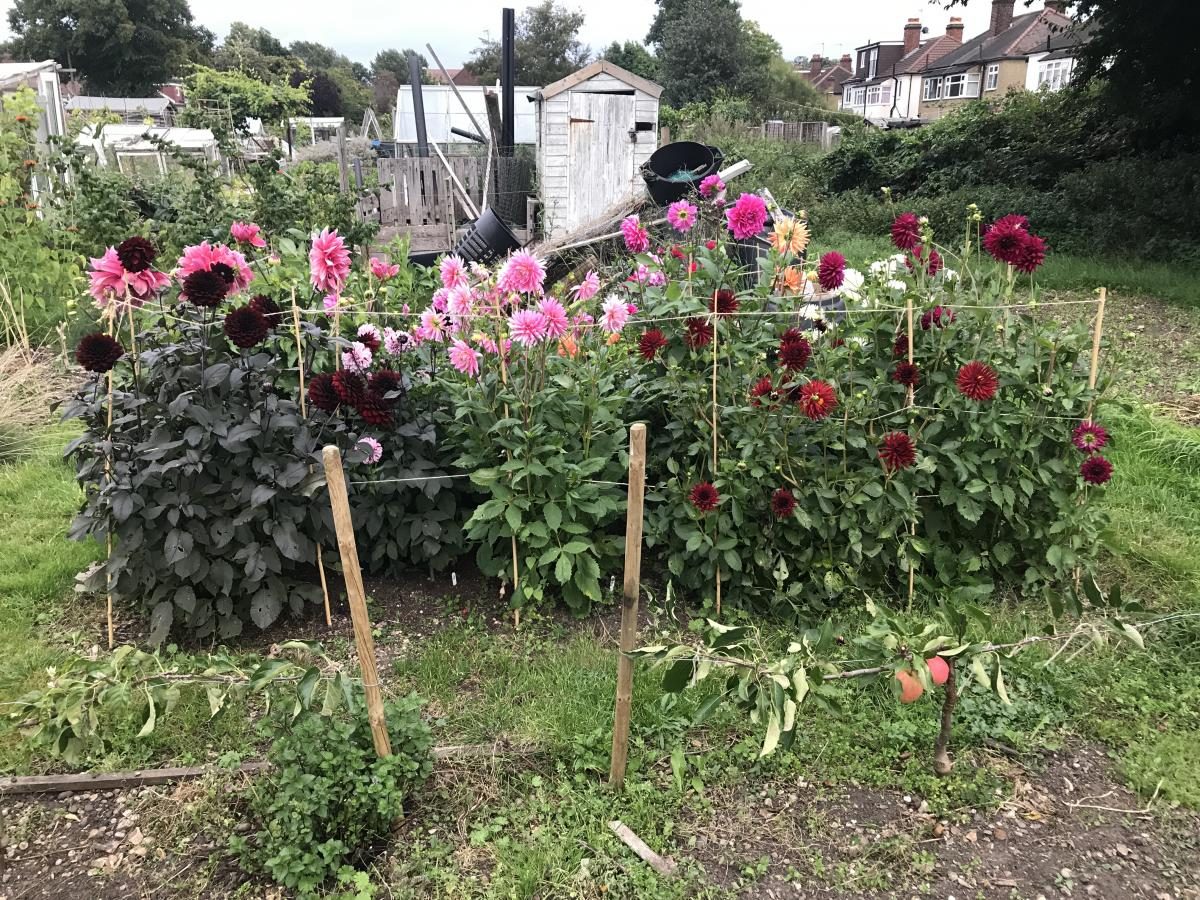 To grow these bad boys in borders you need to somehow have that same level of structural support – micro-scaffolding – but you absolutely must not be able to see it. This is no mean feat, especially when growing varieties new to you because you won’t know how tall they’re actually going to be, a detail you really need to know. Also, Dahlias do grow taller and taller throughout the flowering part of their season – so you need to account for them growing an extra third or so in height from the first flower til the last. If you can master it, you’ll have something like this: 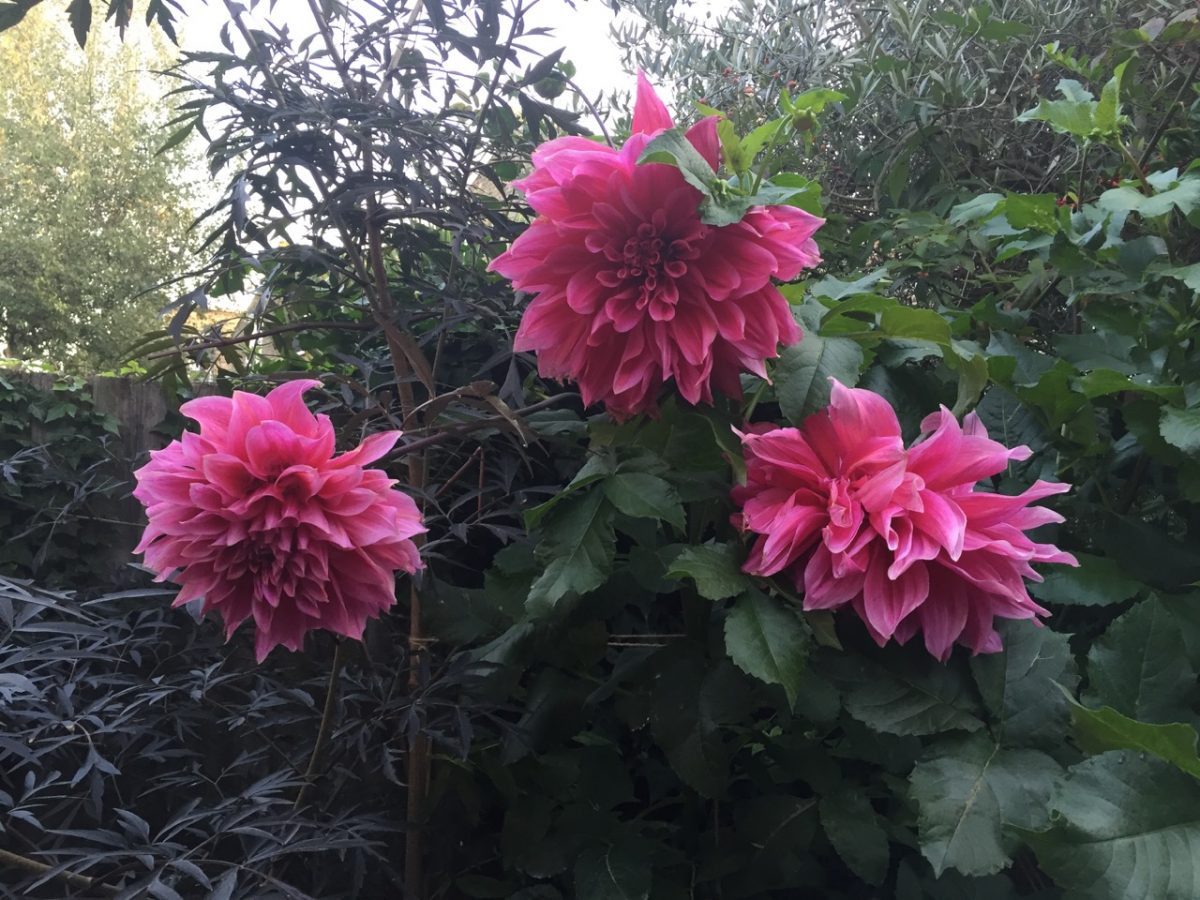 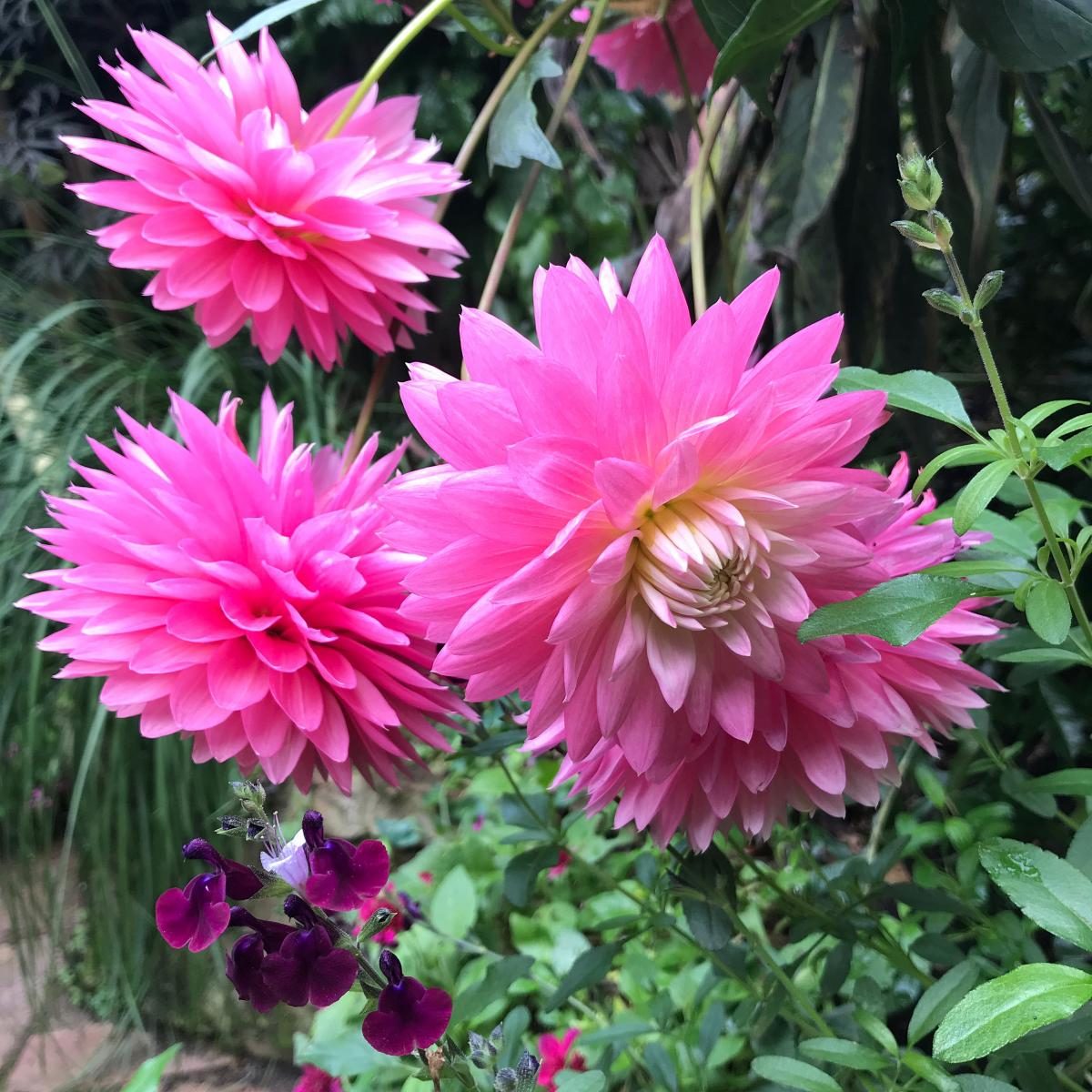 Then of course, there’s slugs and snails that like to munch the leaves to pieces. I grow ours indoors and on our garden table in pots until they’re about a foot tall, then they seem to be left alone, at least on the visible leaves. I’m not opposed to using the organic slug pellets a tiny bit either, they’re not dangerous like the traditional metaldehyde ones. I’m lucky to have not been affected by earwigs, though I’m told they’re a petal menace. This regime is certainly not for everyone – and let’s not mention storage over winter, mildew, constant deadheading and the fact the ‘plant’ itself is a big green, ungainly blob of leaves you need to cleverly conceal while giving them enough sun. So yeah, faffy.

Read every single gardening book from the last few decades and the most they’d recommend Dahlia-wise is the ‘Bishop of Llandaff’ a bold red single flower that’s not very Dahlia-like at all (in the cultivated totally unnatural sense…). You might as well be growing Hellenium or Osteospermum. Not to say that ‘Bishop of Llandaff’ is boring but to restrict yourself to just that is quite unimaginative (aka boring). Having said that, I do like the singles in small quantities. Never one to do what I’m told (rule for life), I refused to grow the red Bishop and instead love my ‘Bishop of Canterbury’. A deep cerise with an incredible black button centre for about one hour in the morning before the flowers start opening to yellow and the bees buzz toward it. 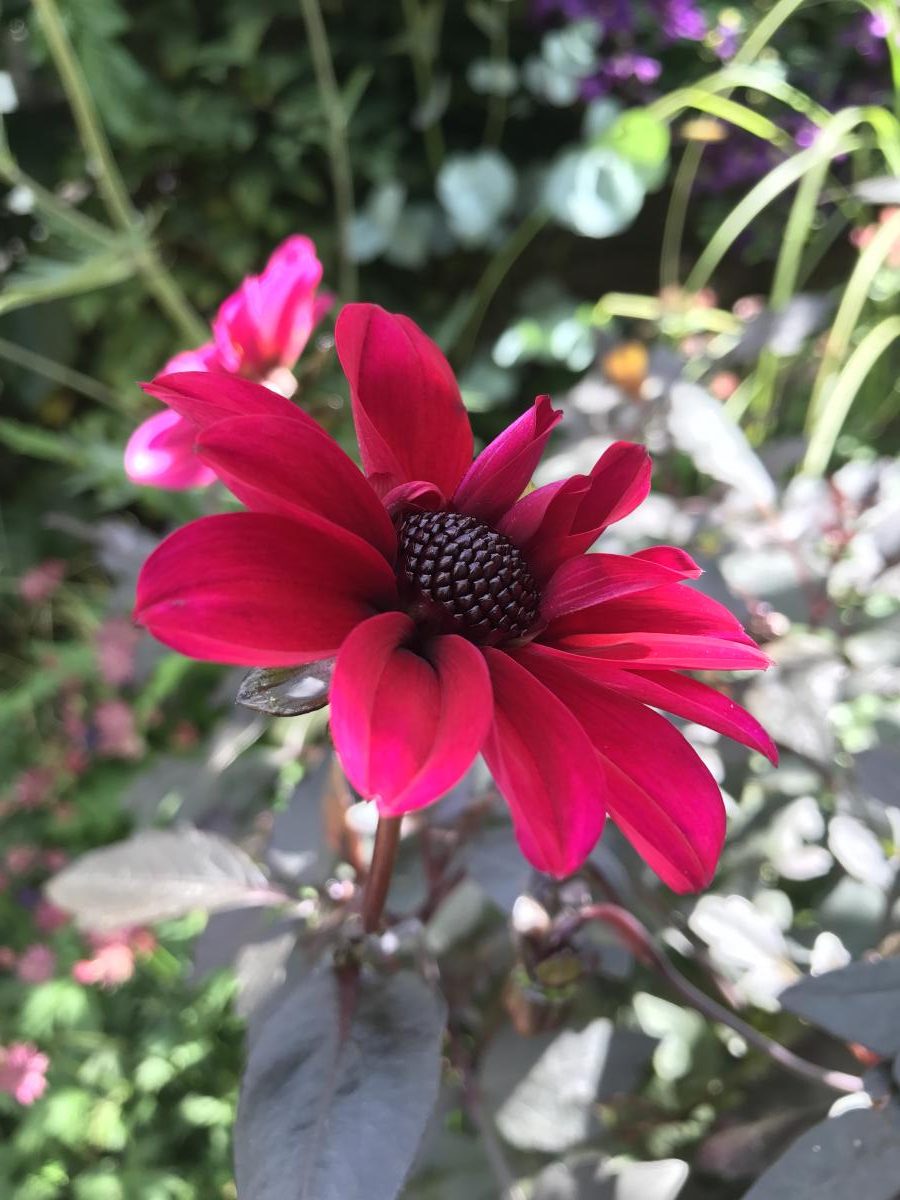 Enough about single Dahlias though – any other flower and I agree, singles are often the best. As many will know, I design naturalistic gardens for wildlife, so single flowers are my forte. When it comes to Dahlias, I don’t give a monkeys about that. Brash is what we want, right? 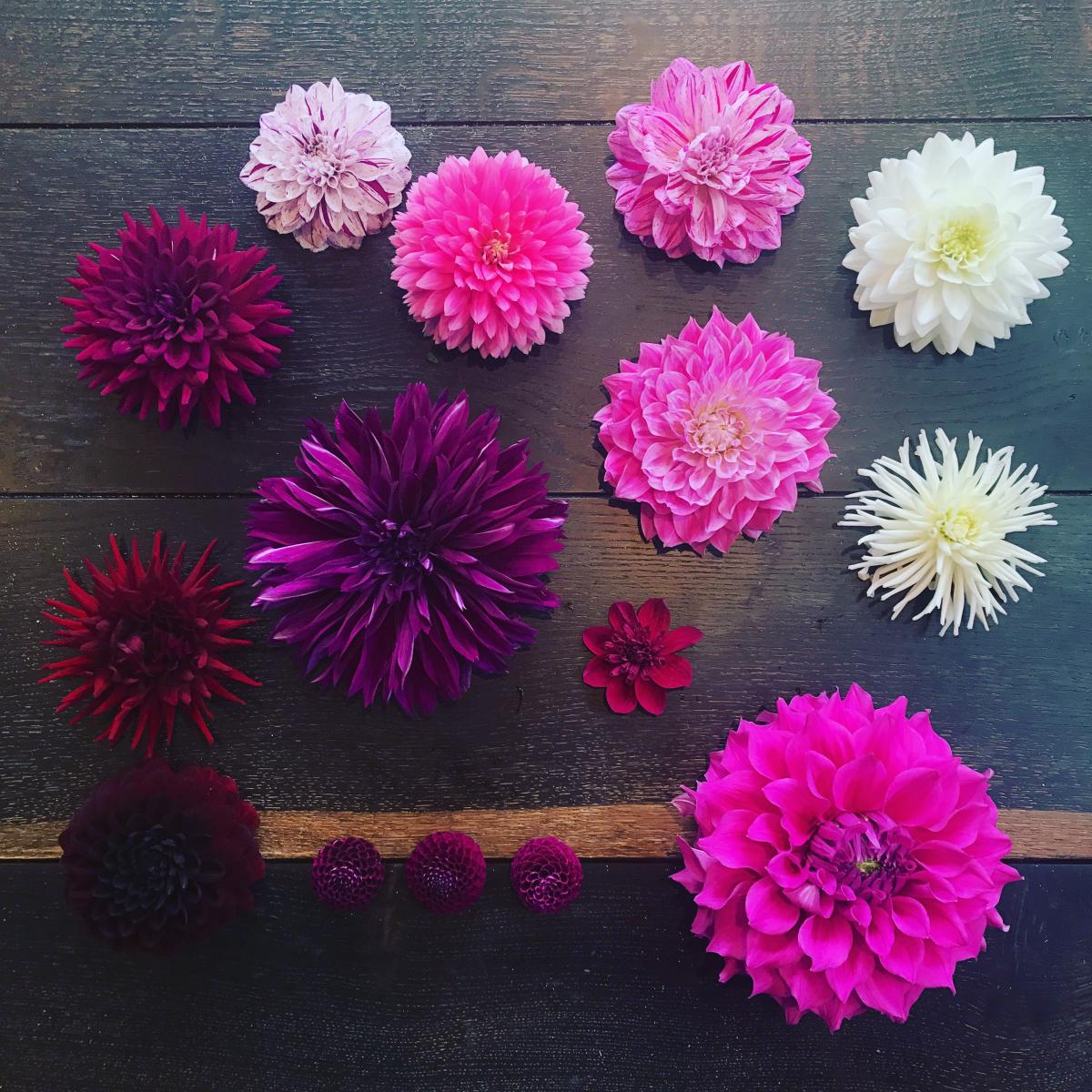 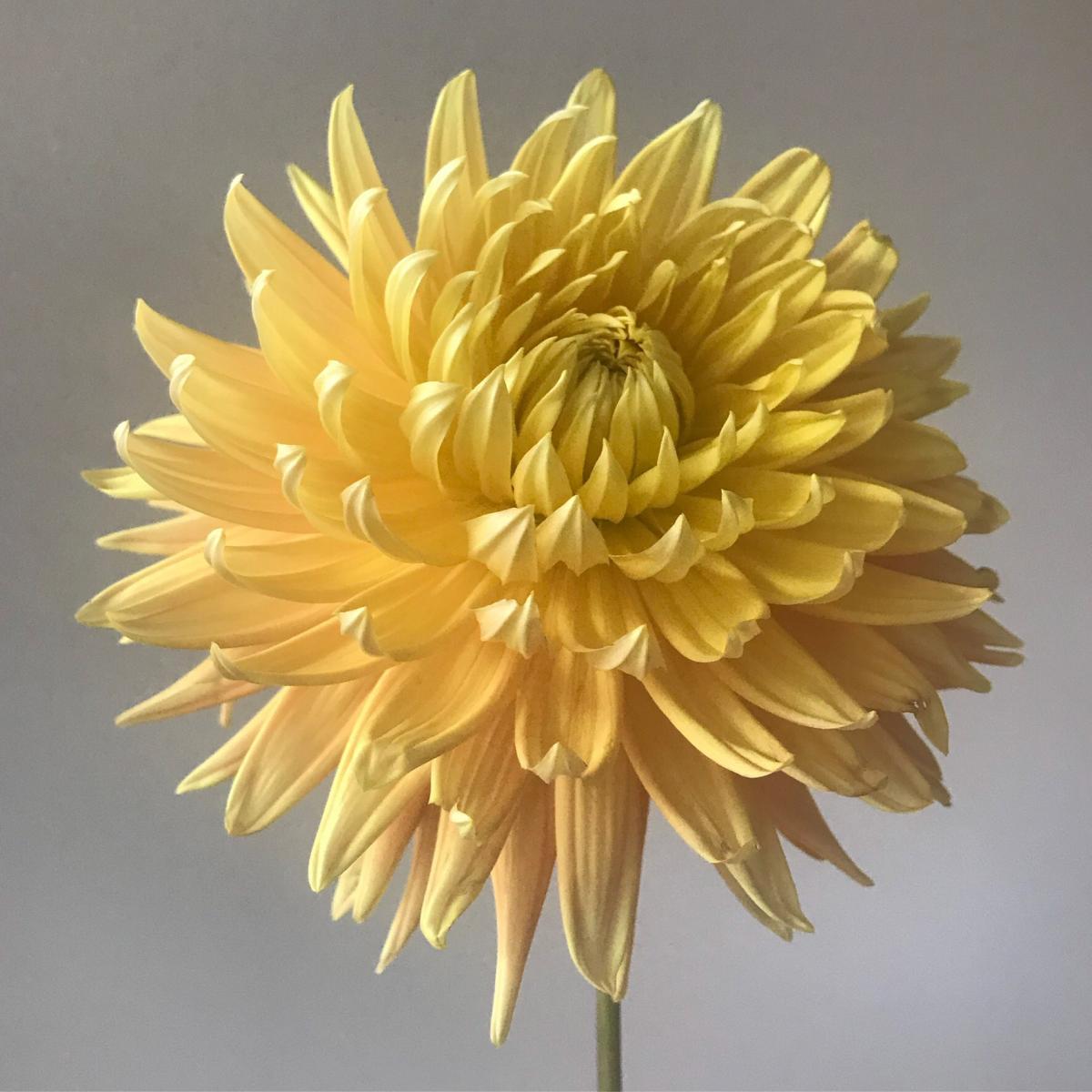 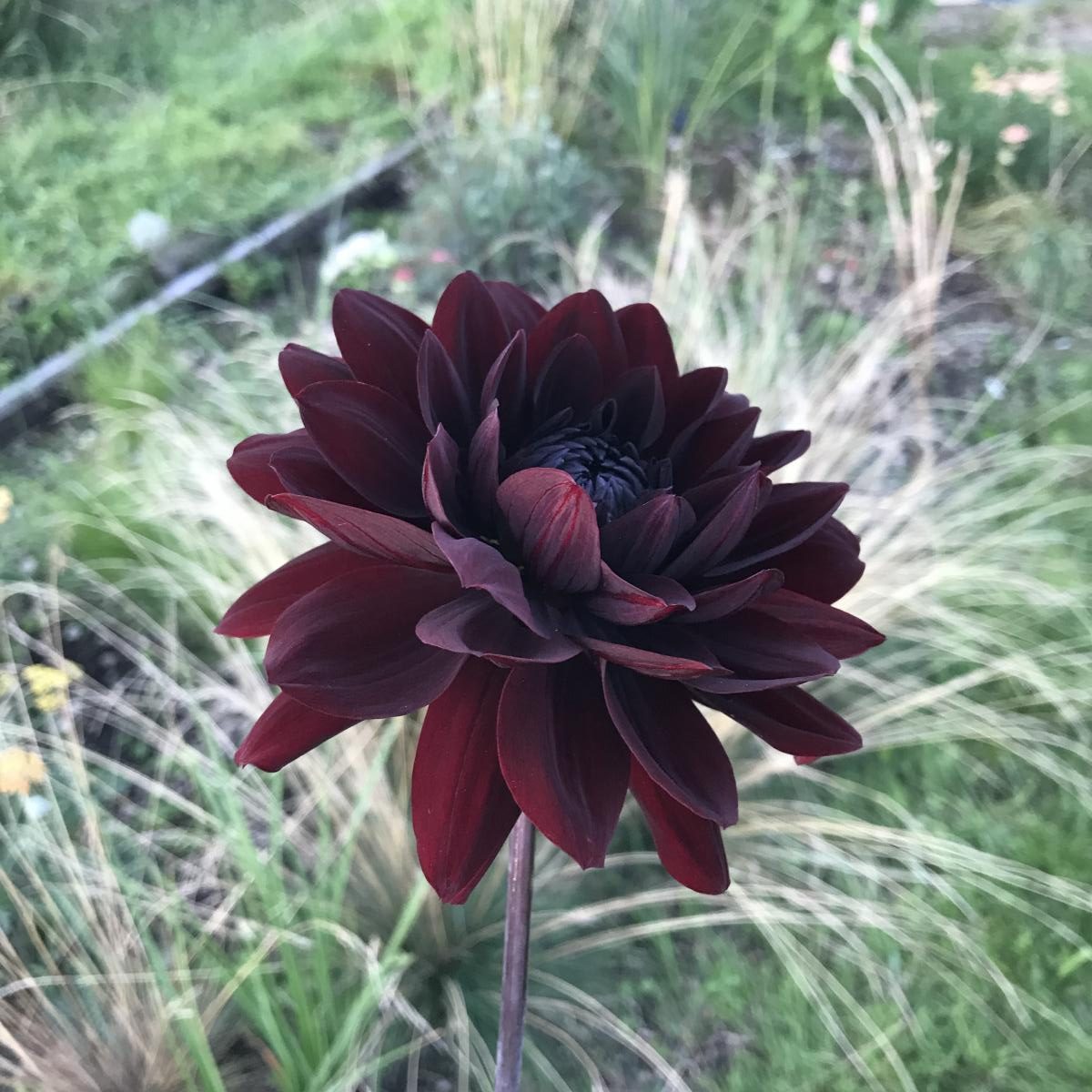 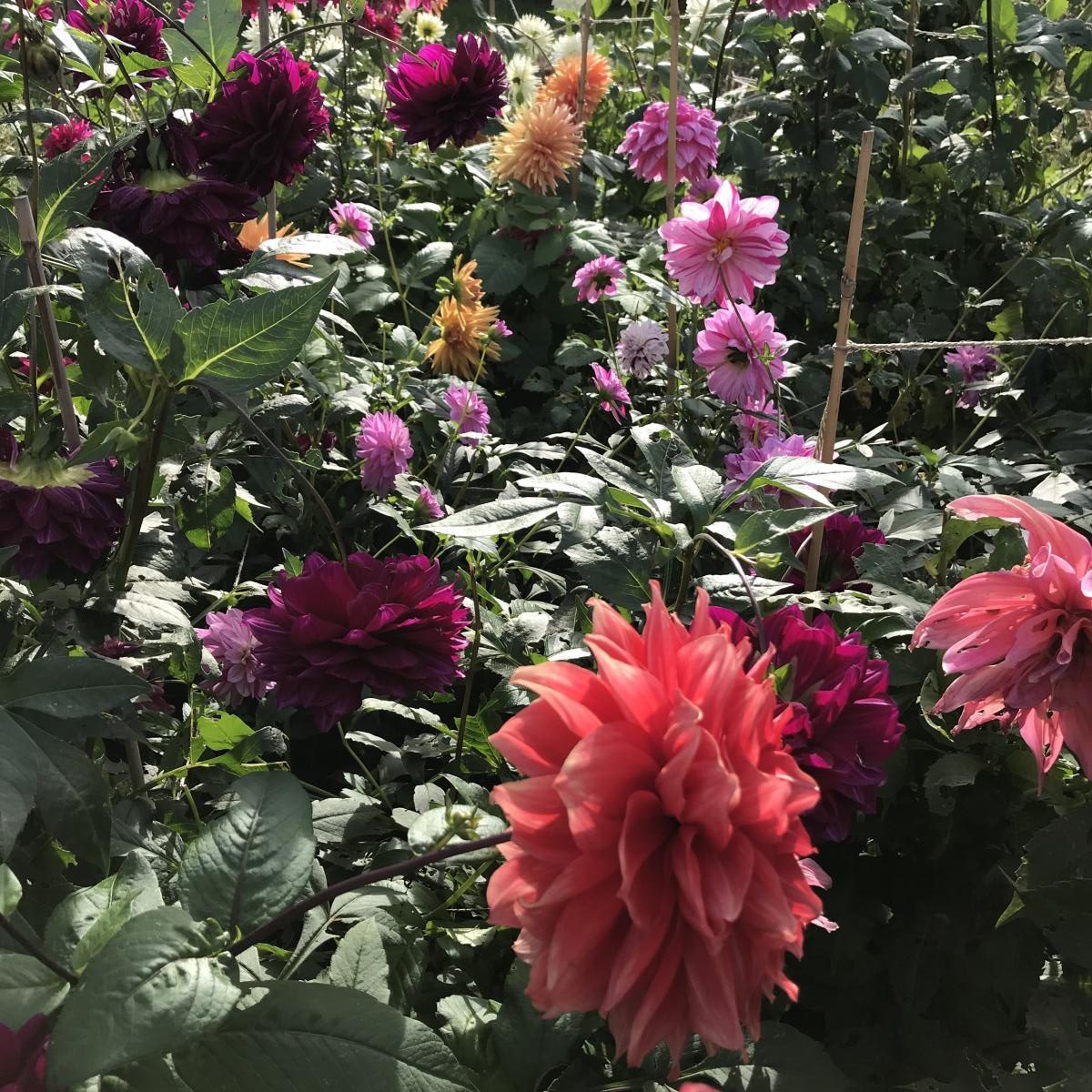 The beauty of a Dahlia is in its ridiculousness. They are Beyonce walking into a room, Lady Gaga on the red carpet, Freddie Mercury on stage. Oddities that dare to be different and eye catching. The gardening books don’t appreciate one obvious and critical fact, proper Dahlias are carved weird jewels.

Books have it so wrong by saying brash isn’t garden worthy. There isn’t a garden committee that decides such things. I find Dahlias so fascinating because of their magnetic shapes and colours. Perfection. 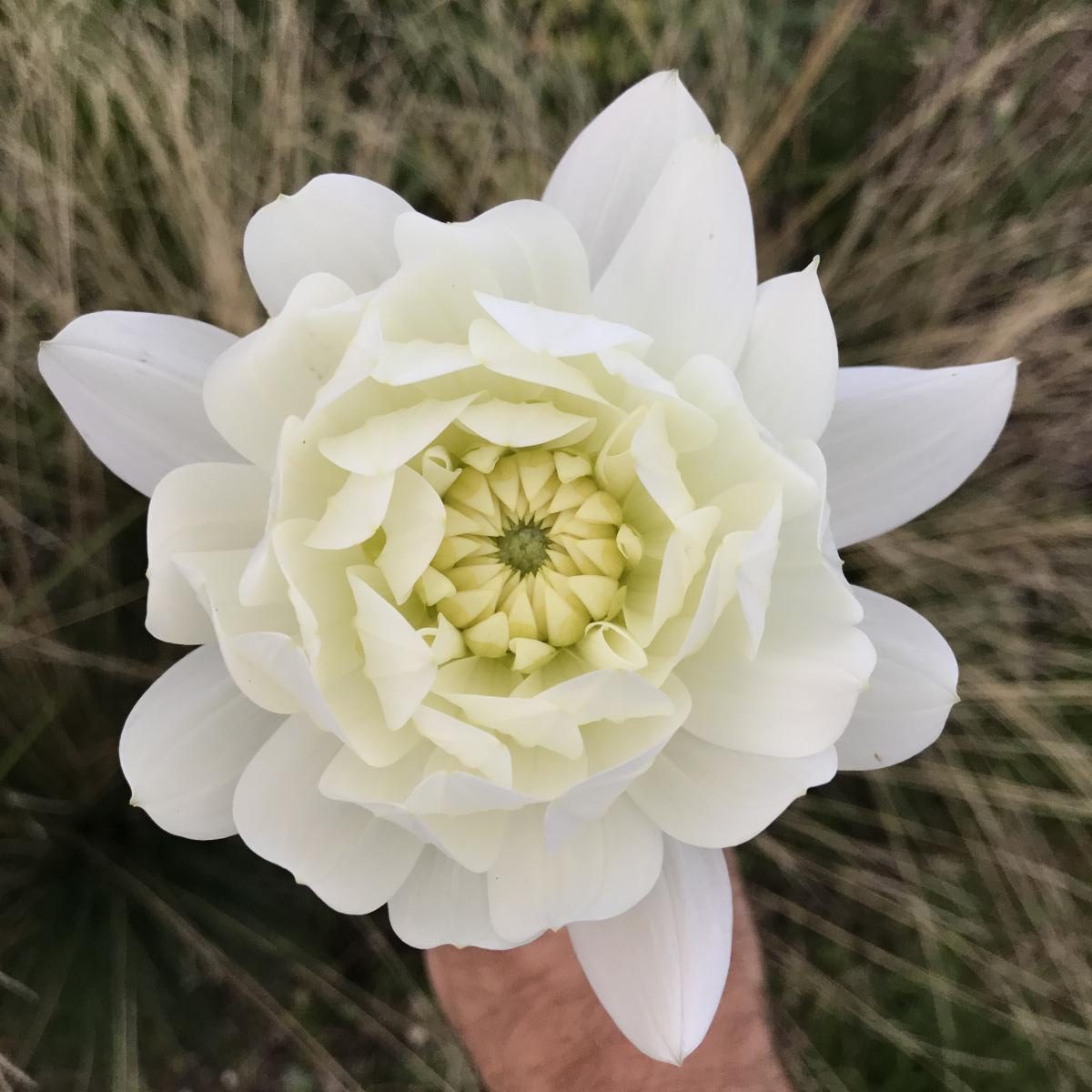 I promise you they can work if you are brave. We have no other large flowers like this in our garden, our garden is really naturalistic and it works to have the odd Dahlia dotted within the natural flow of other plants. Treat Dahlias like futuristic roses, the flowers are similar in size, shape and colour afterall. Restrict your colours, that’s where people of the past went wrong, rainbow colours. Don’t do it.

No photo of a Dahlia I post is ever of exactly the same flower. Dahlias flower so much that every week from only a handful of plants our garden is awash with colour and my allotment pumping out hundreds of flowers all summer to go into vases. 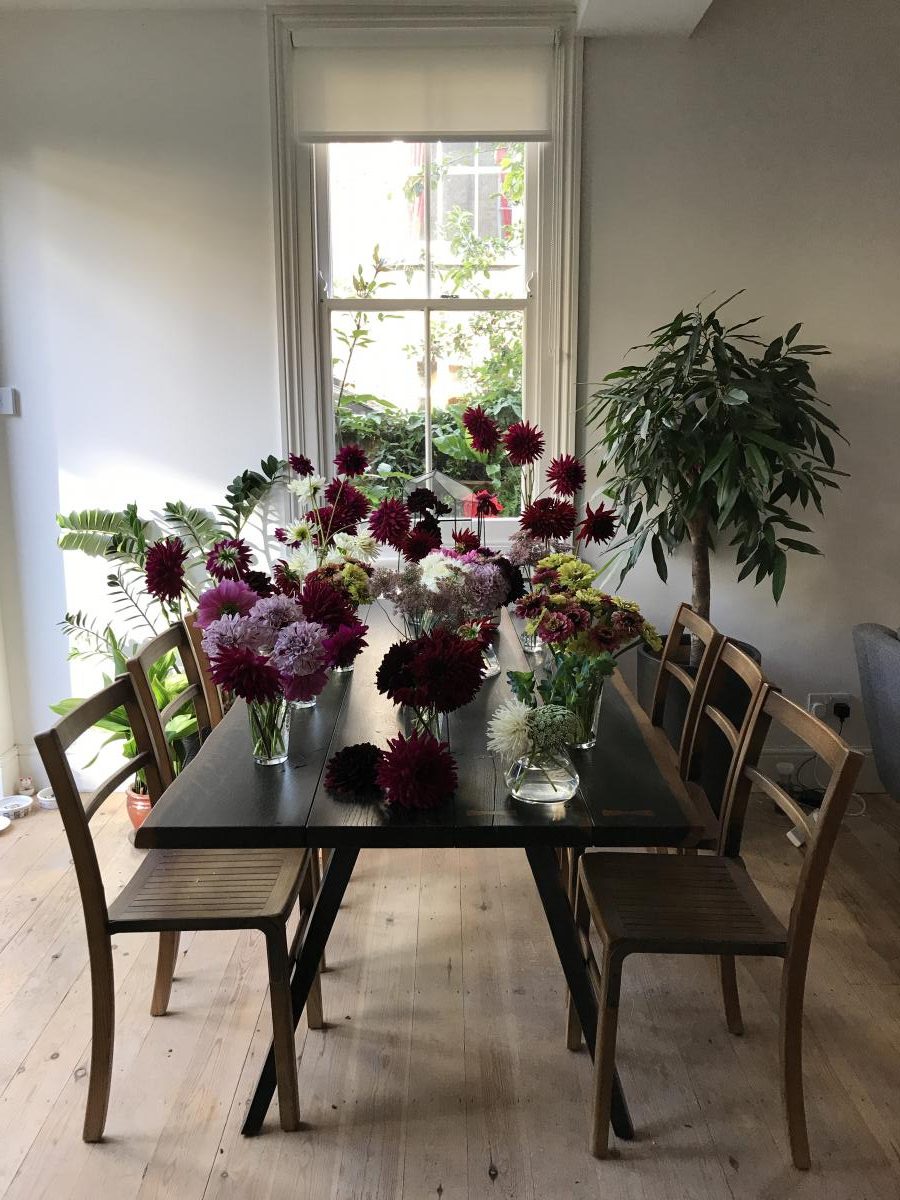 So much so, Chris had to come and help me on numerous occassions to carry the motherload home. On one occasion, when we went on holiday for a week to St Ives in Cornwall, despite disbudding the week before, so many new buds had grown and flowered in seven days that we’d missed the lot. These are the deadheads from only three of my twenty or so allotment plants that week. Is it possible to drown in Dahlia flowers? By this point we were certainly swamped. 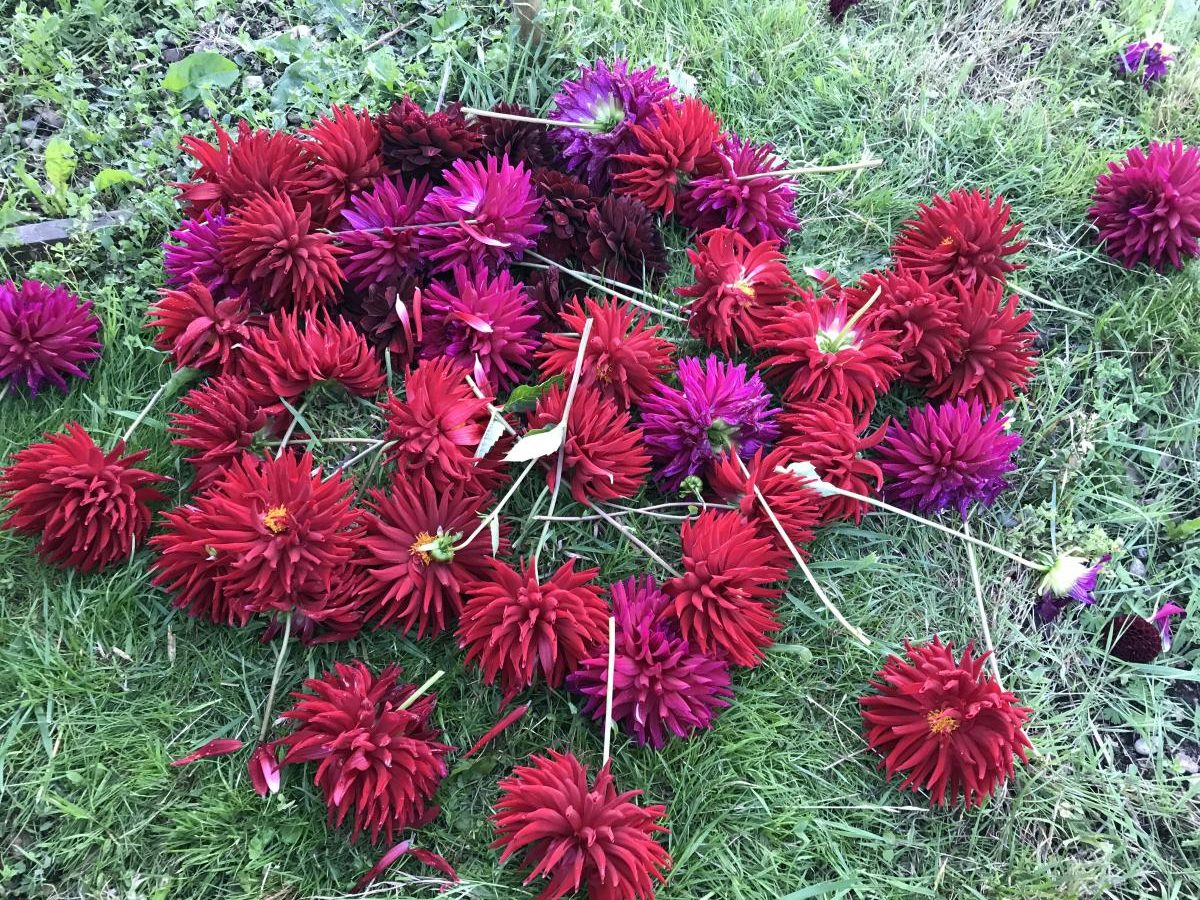 Cutting Dahlias and bringing them home is also a large part of the fun we have with them. Unexpected as we definitely aren’t born florists or flower arrangers. Creating the display for our September NGS open day was one of our surprise personal highlights of the year (even when begging local bars at midnight to give us their empty bottles for more vases). Hard work and months of planning resulted in visual eye candy. I love it so much. 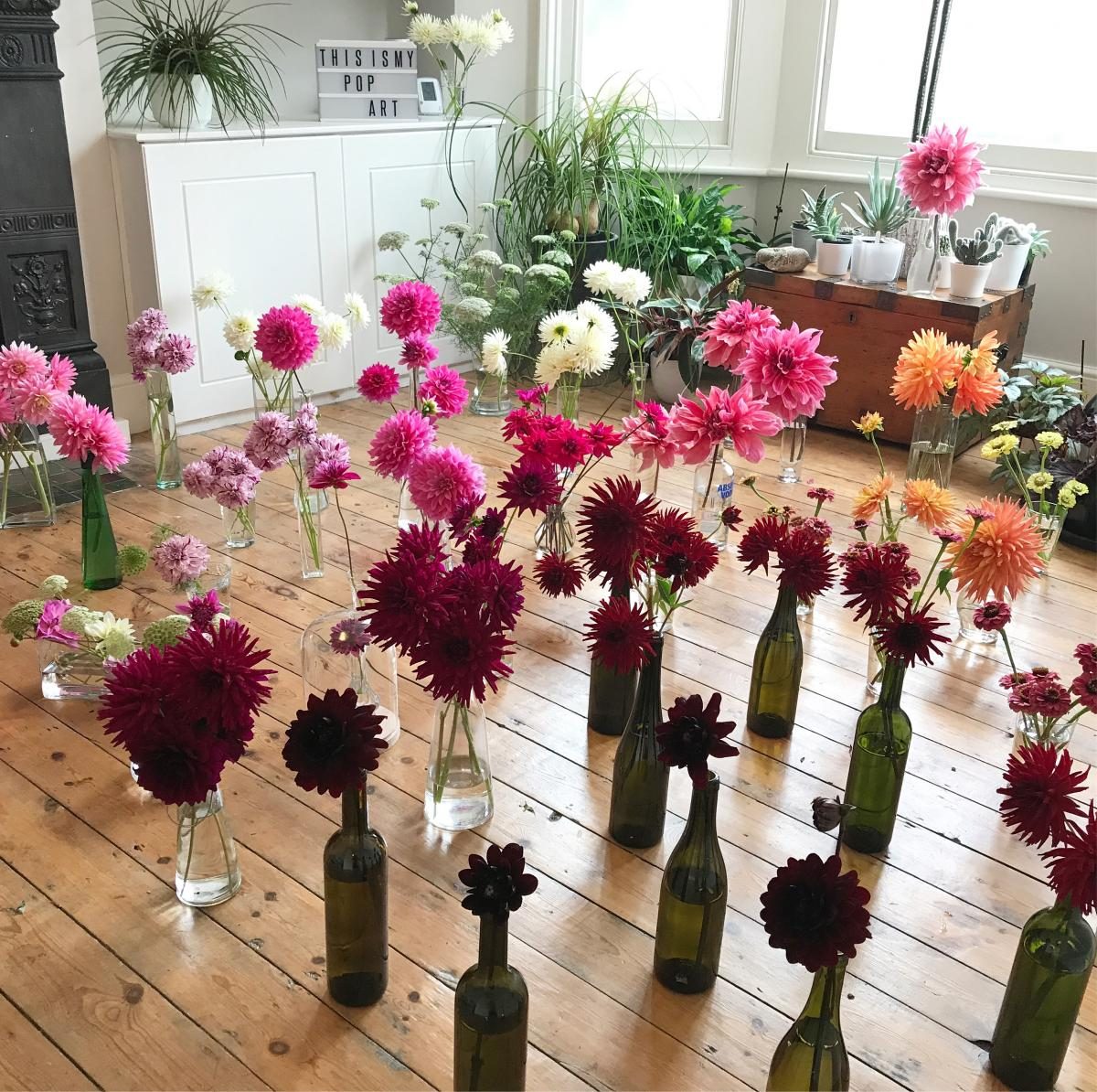 Late September and we were in the eye of the storm. Flowers were being given away left, right and centre to people. My Instagram feed literally couldn’t keep up, imagine! 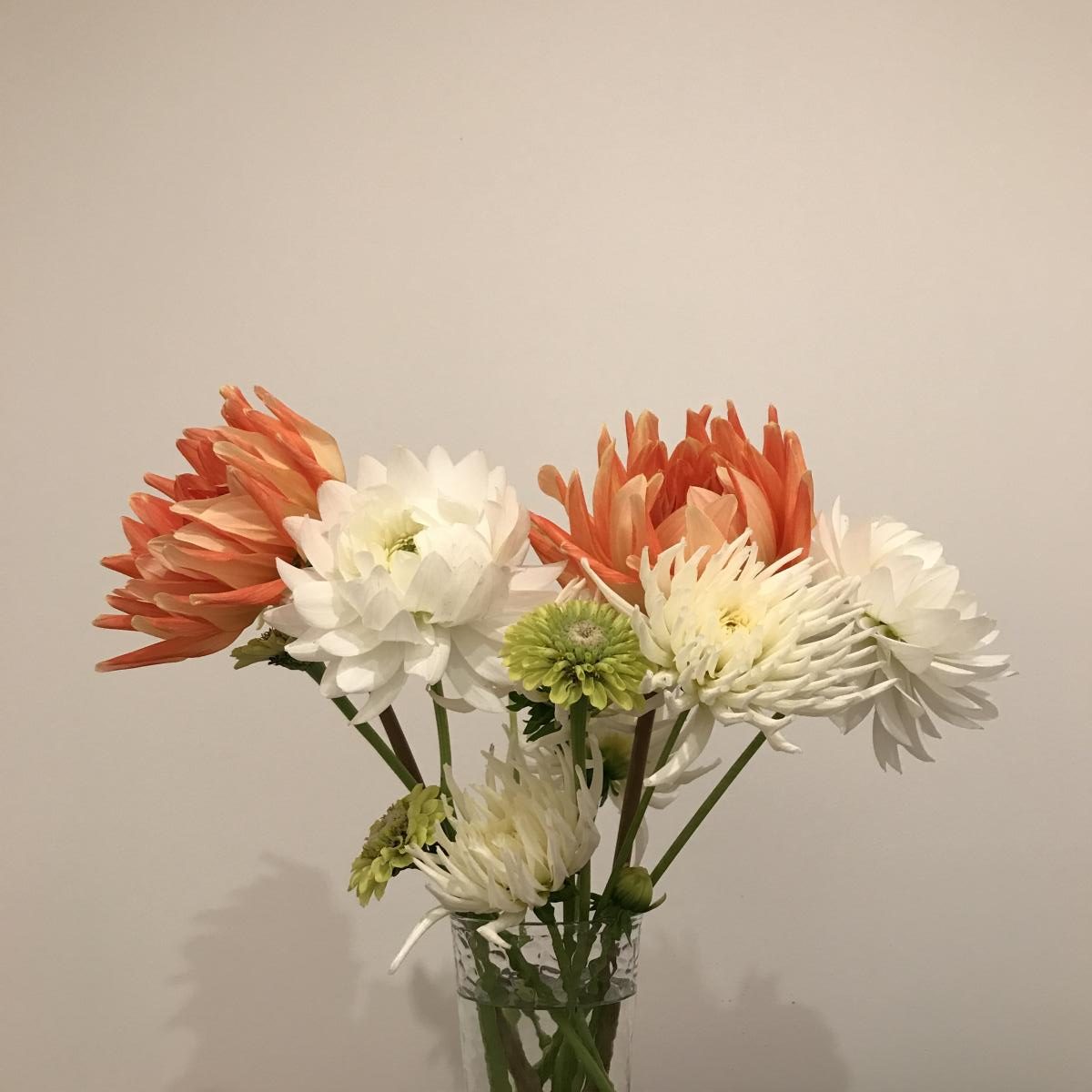 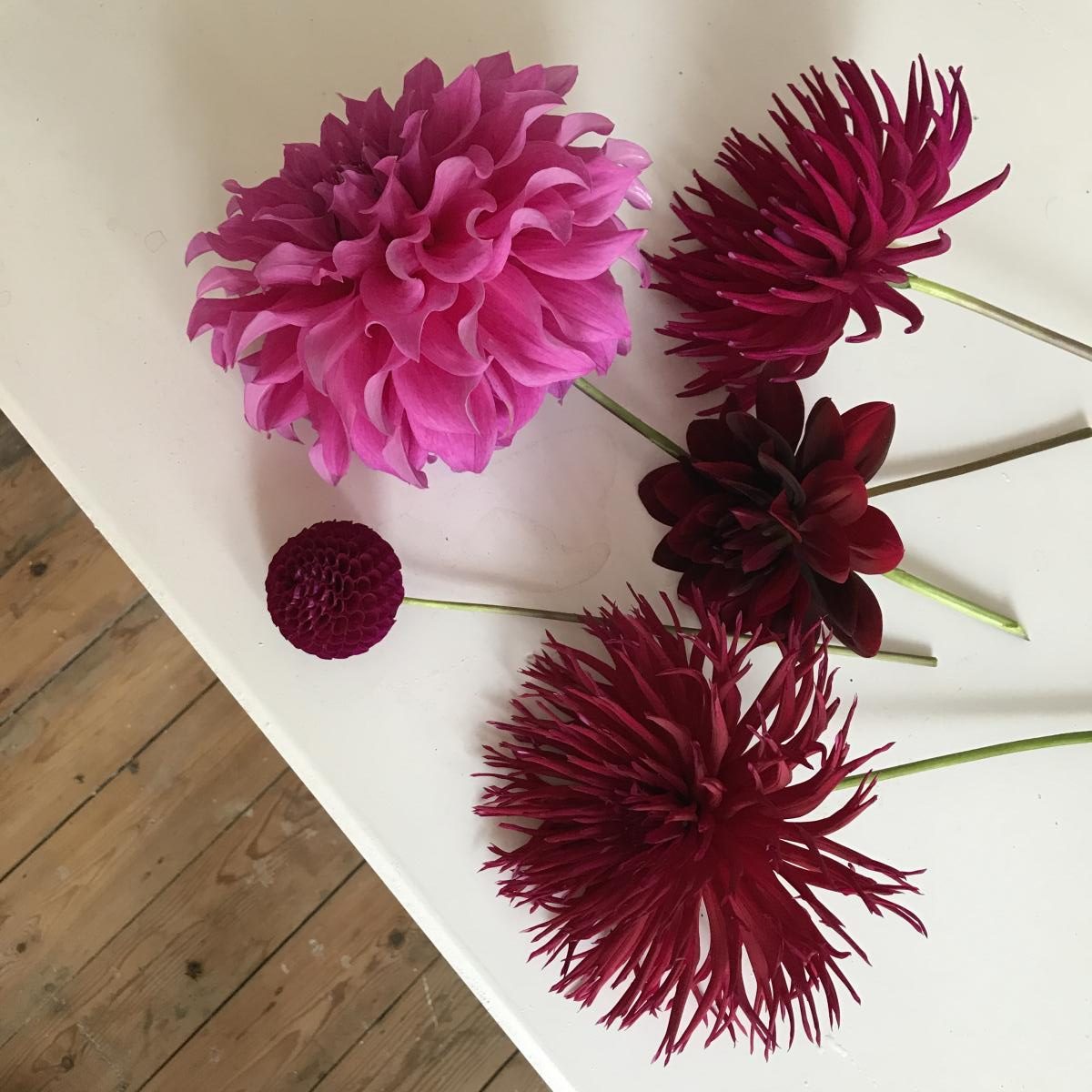 So yes, Dahlias are fusspots with brashitude and an excessive, demanding lifestyle. As a tolerant gardener, I welcome them in for these reasons.

Slave to the rhythm

Creating DAHLIAGEDDON takes quite a bit of work then. And when you’re hit by the full force of the brash flowers that taste forgot, you know it (this has literally happened to me on a windy day). All things considered it makes no sense for anyone to grow Dahlias. The Taste & Effort Police are right, after all there are plenty more flowers in the border. You know what though, when it comes to the question of what people think, usually in life I find it’s better to do the opposite regardless. Because no one can argue with this… 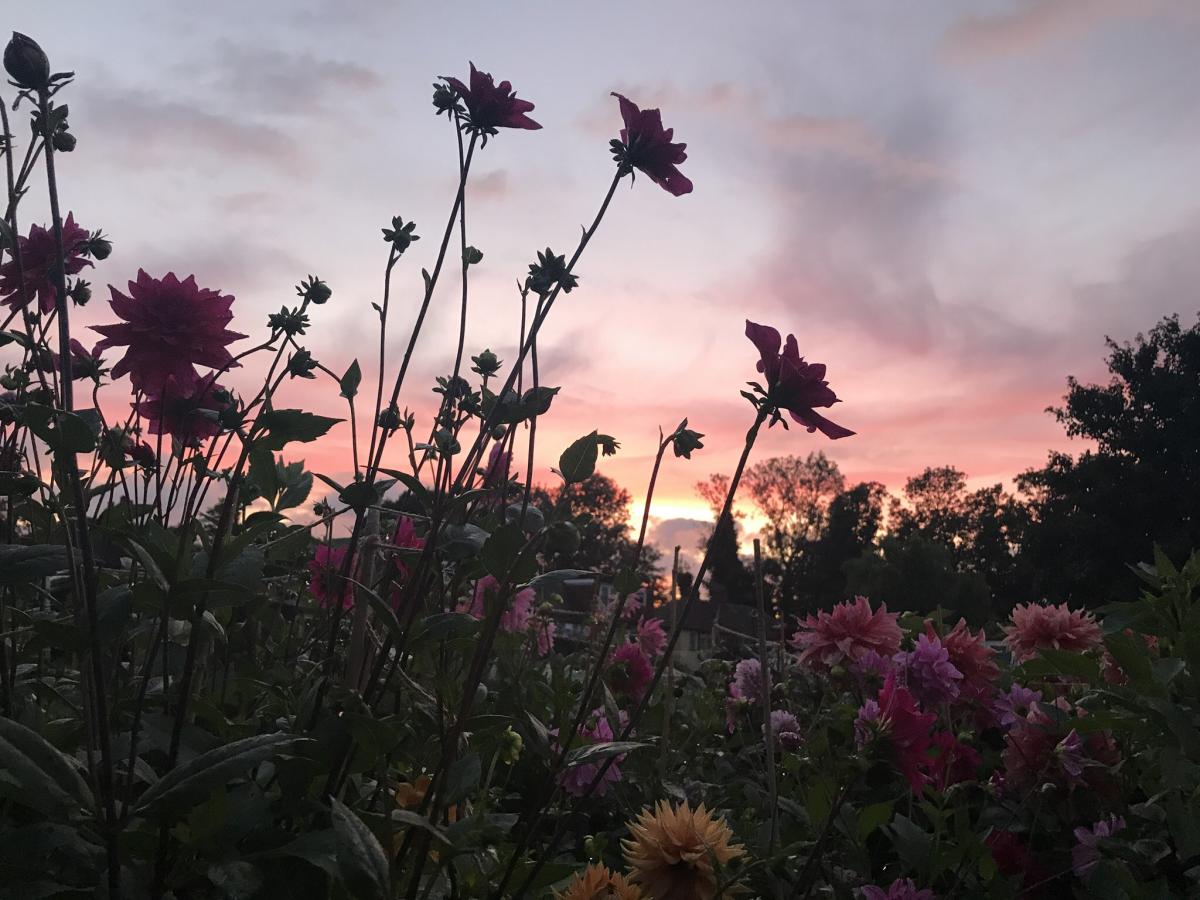 When the storm of Dahlias finally cleared for the year (I’m about to deal with the aftermath) I’m left wondering which caught my eye the most this year? The answer to which is simple: all of them and on that I am genuinely not budging.

I will however leave you with this photo of Dahlia ‘Bristol Stripe’, one of many variegated Dahlias. If there’s one thing worse than a fussy, brash, excessive, needy Dahlia it’s a variegated one. So whack this in your garden and let the Taste Police try to arrest you. I’ll be there alongside you, chained to the thing welcoming in DAHLIAGEDDON 2018. Bloody marvellous. 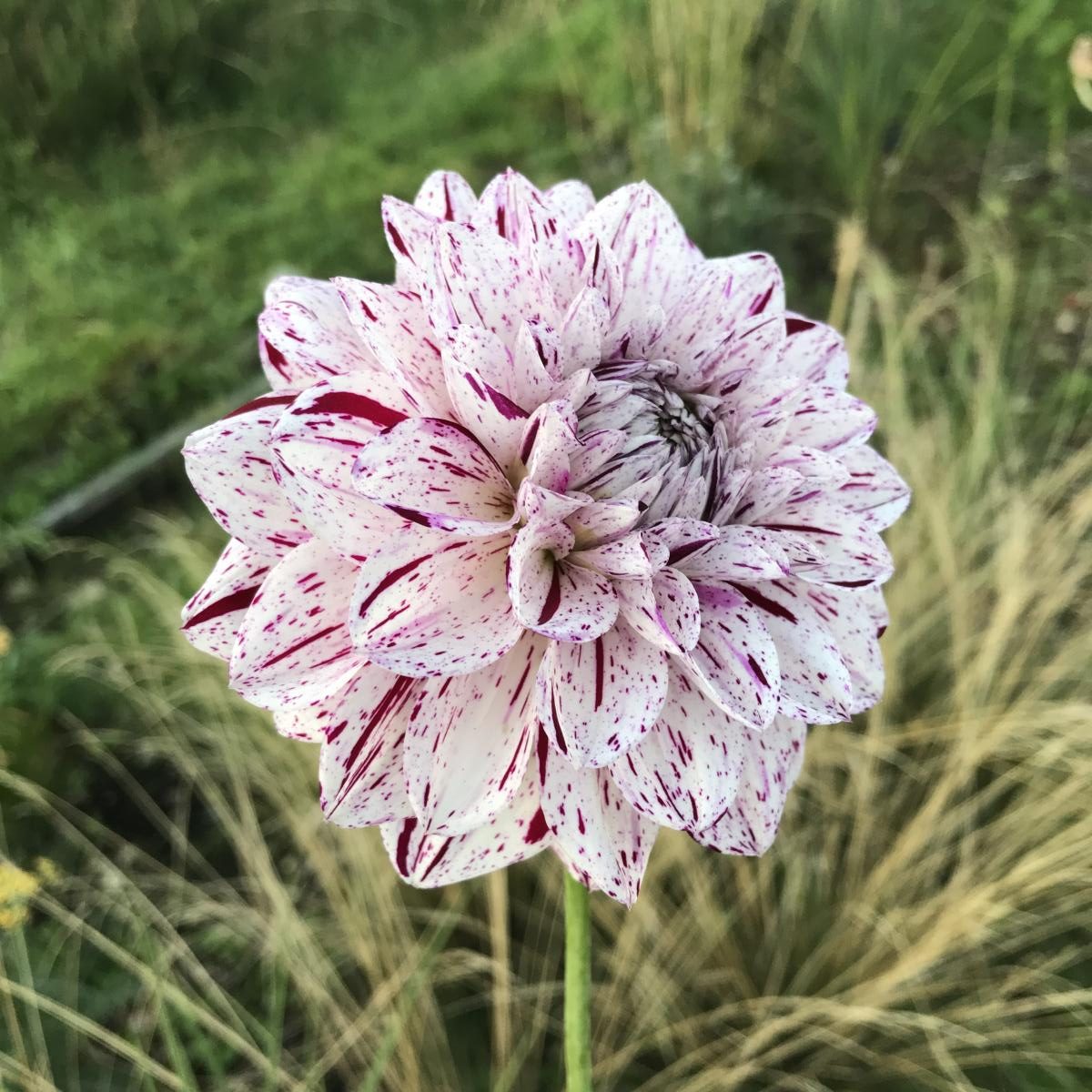