The race to grow is primal in all living things. One of the challenges of planting a new border in autumn is that other plants, the unwanted, are fastest to nature’s buffet, germinating and growing in winter as though it were spring. Urtica dioica, the common stinging nettle, is a real problem on this patch and something I hope to outgrow, as is Malva sylvestris (as pretty as that is, it’s not for here). If these tough weeds think they’re alone they are mistaken however because there are now signs of life and the adventure begins. Spring bulbs planted in October have begun to poke through the soil. Slow now but with enough fuel stored to propel them upward above ground. 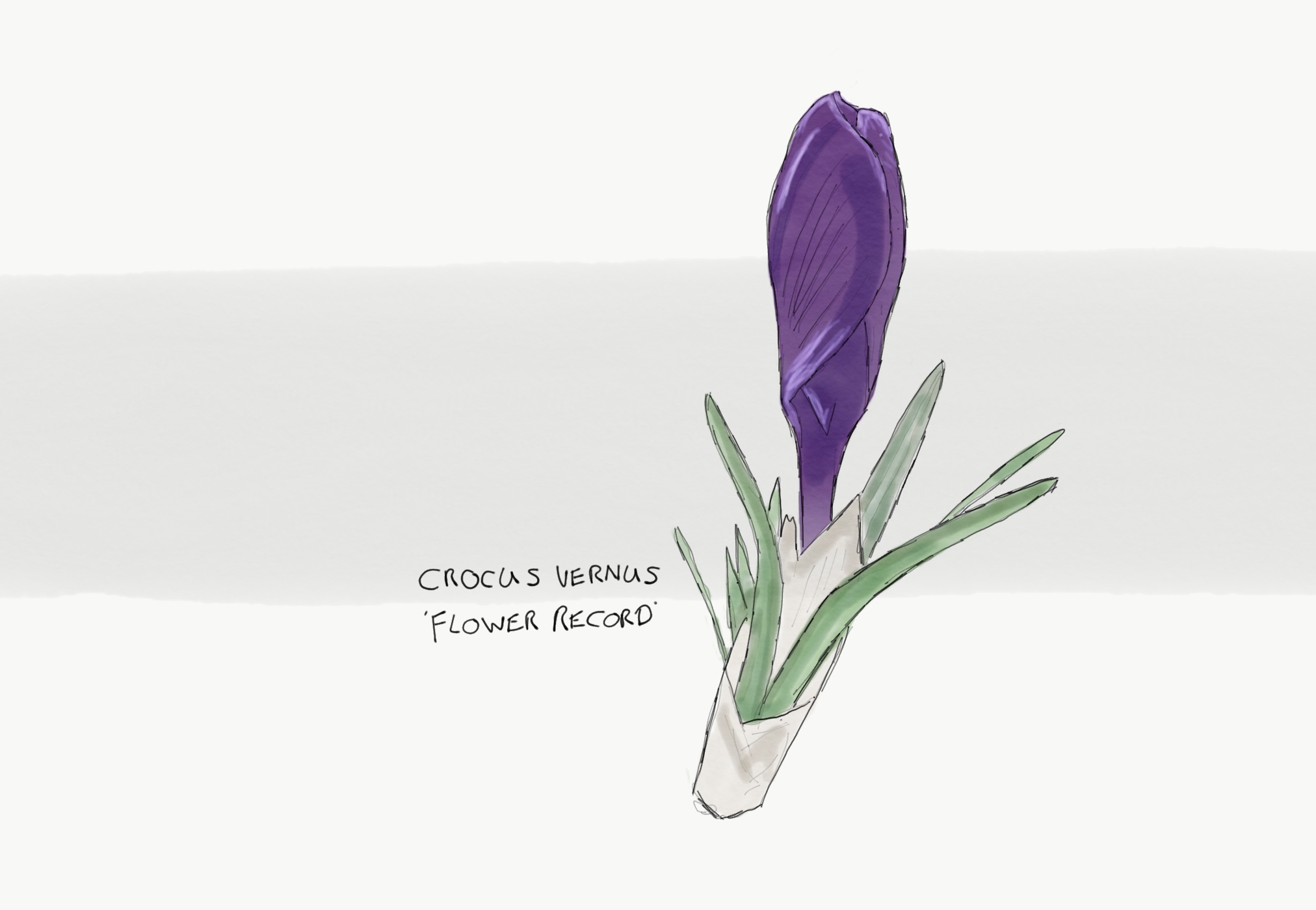 A lone Crocus ‘Flower Record’ does the opposite of glow, one of three cultivars I planted in Autumn, its light absorbent silk-purple flower bud about to open. Small from a distance, incredible when I crouch down and look into its deep ink up close. Petals three times larger than the plant itself. I’ve planted low creeping ground covers among the crocus to smother future unwanted plants. My hands will do most of the work keeping weeds at bay this winter but there will be no stopping my chosen plants by the end of summer.

Although I’m growing the meadow for fun now, I’ve found myself already looking forward to year two, three and beyond when all of my introduced plants will have bulked enough to fend off competitors from weeds and chomping snails. Plants I’ve been adding are thugs by nature, perhaps more so than most gardeners would want in a garden. I’ve grown all of these in significant numbers before and I love that they grow out of control. This is a persistent, long term planting.

Many of the plants like my Astrantia major ‘Ruby Star’ cuttings and Eryngium giganteum seedling are still below ground and I question to myself if they’re still there. Particularly the Eryngium, so tiny last year when planted out with the intention for it to multiply in years to come. I know it has a strong tap root and I’m hoping it was tough enough to face its first winter, beyond that it will need no help from me. Two Echinacea purpurea ‘Fatal Attraction’ plants have little red shoots at the base ready to grow. In our garden the emerging leaves of Echinacea are devoured by indiscriminate snails, here in the open ground I hope they fare better.

Of biggest surprise are the annual volunteers, Centaurea cyanus ‘Black Boy’ pops up in greater numbers every year where I originally grew it for cut flowers. Silvery green and purple rosettes that look fragile but are tough. Originally in a neat little line, it’s now mingling more naturally with Papaver somniferum and Nigella damascena. Three different rosettes I now recognise easily and fondly. These annual plants have made themselves at home in self sustaining populations. Calendula ‘Sherbert Fizz’ is there somewhere too and an ever increasing population of Cerinthe major – both will germinate in their hundreds at some point in spring. I don’t need to do anything except weed out the odd Senecio vulgaris and Elymus repens trying to muscle in.

At home I have a Belfast sink in which last year I planted a division of Monarda didyma ‘Cambridge Scarlet’, tiny then, it has now taken over the entire sink. This week I cut out two squares, crowded snake like runners of the plant, slipped them into pots and took them to the future meadow. Without much care I firmed them into position together toward the back where they’ll benefit from some shade of other plants. Keeping them together in one big clump rather than dotting them around as I did the Rudbeckias.

I’m deliberately not creating a plan upfront for this meadow, instead making random decisions as I go, not a method I advise although it allows for some serendipitous planting combinations, or at least I hope it does. One theme emerged early on however that I’m clumping most colours together in partners I believe work well together, so it’s not totally hit and miss, whereas the bright yellows I’m doing the opposite, and spacing them all around the place to make little dots of bright here and there.

On my next visit to the allotment I plan to remove one of the old structures separating the two halves of the meadow, opening up more planting space and joining the halves together. This will give me the first proper look at the space and planting I’ve created, particularly now some of the plants are starting to grow.

Alliums, of which I’ve so far planted three types, are sending their leaves up. The three types are: A. sphaerocephalon, excess bulbs from our garden, A. hollandicum ‘Purple Sensation’ because it’s still the cultivar with the best colour, and A. christophii for it’s supersize flower heads low to the ground but mainly because I think of it as Christopher’s Allium due to the name.

Making the most of the warmer weather in February, I lifted another Miscanthus from our garden, M. sinensis ‘Gracillimus’. It’s in a pot at home getting over the shock of being ripped from the ground but I’ll plant it out in late March where it will be much happier in the allotment’s greater sunlight. Our garden is too shady for it, it never grew any bigger – in fact, I’m sure it’s grown smaller over the last few years. It’s sitting alongside various other grass seedlings and divisions on our patio and I’ll only plant them when I know we’re past the frosts and I can see they’re growing strongly. Grasses are often thugs but until they’re big enough they can be out thugged by strong perennials.

The interesting thing about the meadow is that I don’t know what it will look like, it may be a big colourful mess. In someways, I hope it is. The idea being I can then see what does and doesn’t work well together this year and continue to make adjustments every year after. All of the plants will contribute to this evolution because they’ll self-seed, spread, etc. What it should create however is an interesting and fun planting for me and wildlife that not only looks after itself, but reduces the need to weed. The main criteria for success is the meadow’s survival without my involvement. Although aesthetically I will always want to move things around.

As we approach the end of winter, spring is certainly on the way and the plants know it. Verbena hastata, grown from seed last year, look totally dead but scrape away some of the sandy soil and many dark red shoots can be seen. Locked and loaded and I know full well these plants are vigorous space hoggers.

The only other thing to note from winter: at home Cirsium rivulare has grown so strongly that one growing point had been pushed above soil level by the rest of the plant’s roots. I snapped this off, put it in a pot and already it’s off and growing into a new plant. When a little bigger this too will make its way to the future meadow.

2 thoughts on “Future Meadow: Winter One”