Over the last few years I’ve been surprised at the number of tender plants that can survive outside over winter with minimal protection in our little garden. Now, in December, most of the leaves have fallen and many of our plants have died back to ground level (or just died). But the garden doesn’t rest until spring, in many ways it’s more active now than in what we call the growing season. Birds a plenty are sheltering in trees while plants, having drawn sap back into their stems and crowns, develop new swelling buds as they do. It’s at this time of year that you can see how plants are bulking up as their growing points increase in number. Our Acanthus spinosus for instance will need to be sliced in half to restrict it from growing to unmanageable proportions next year. 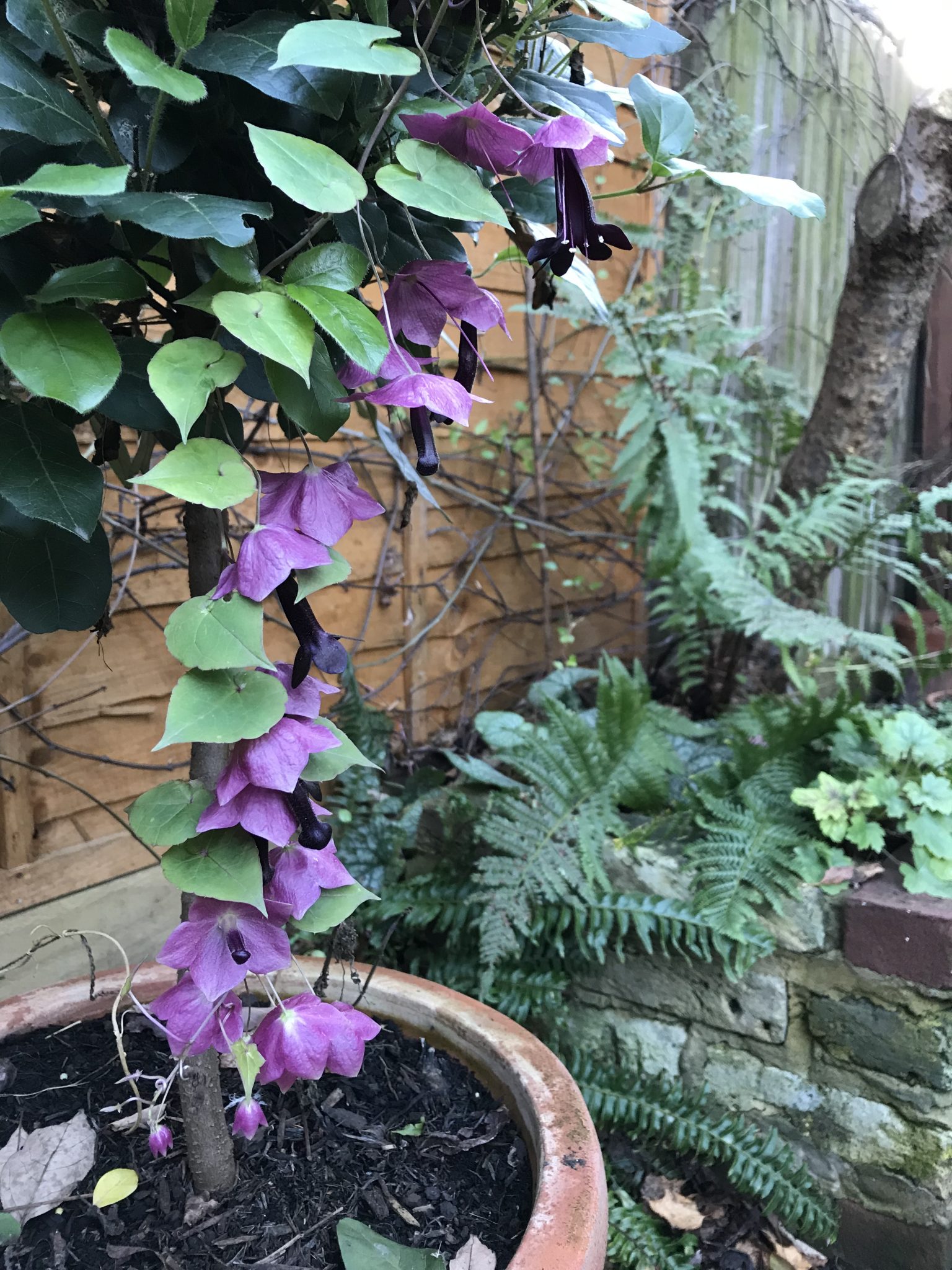 Rhodochiton atrosanguineus is a plant usually treated as an annual in the UK that is very perennial in our city patio microclimate. I have a number of these vines that are a couple of years old and find – as with all plants that behave like this – are very happy to keep flowering late. 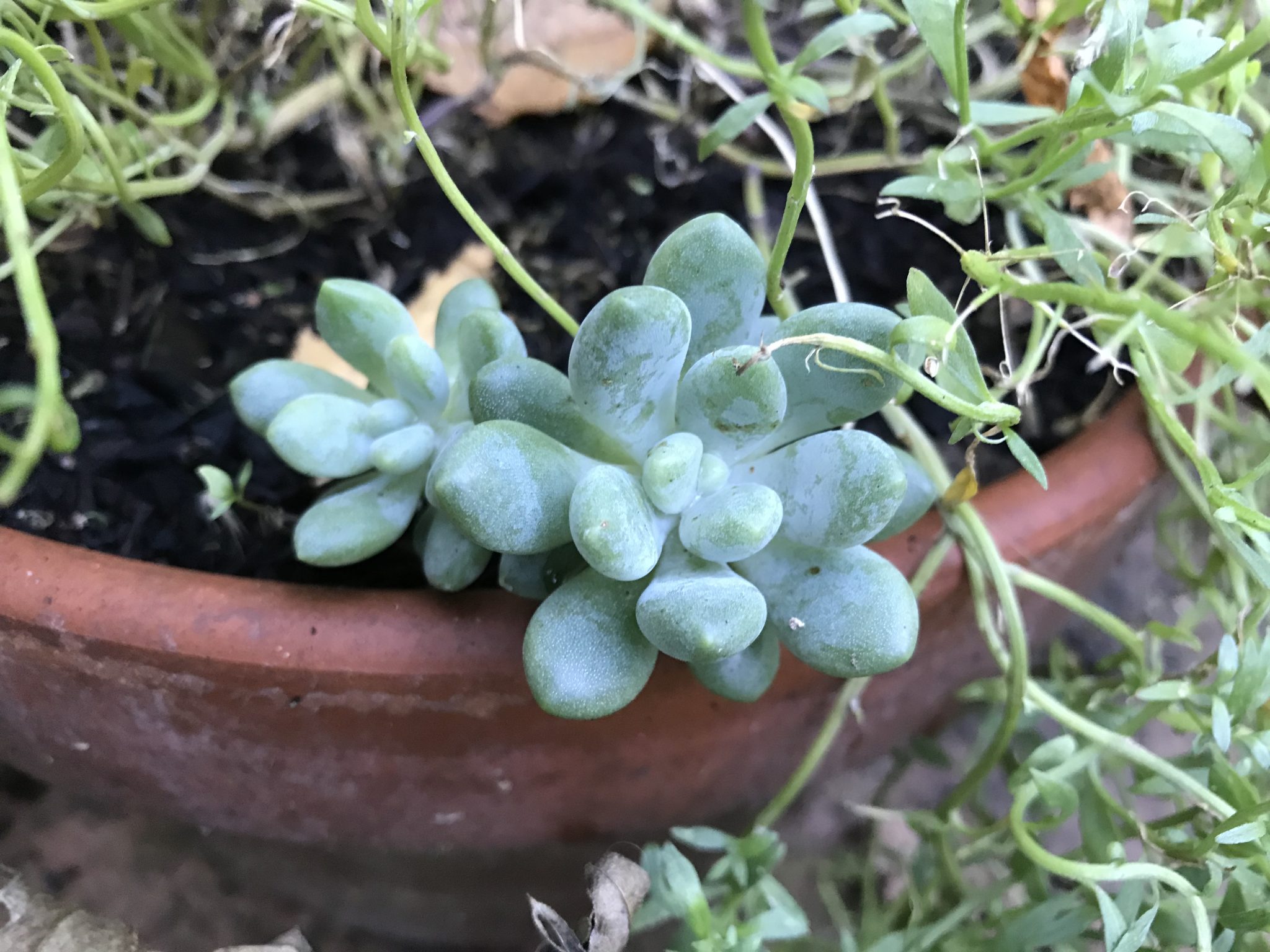 This year I decided to really push the limits of plants to see what will and won’t survive outside over winter. Pachyphytum oviferum is one of a bunch of succulents I had great propagation success with and the spare plants are outside now seeing off the winter. 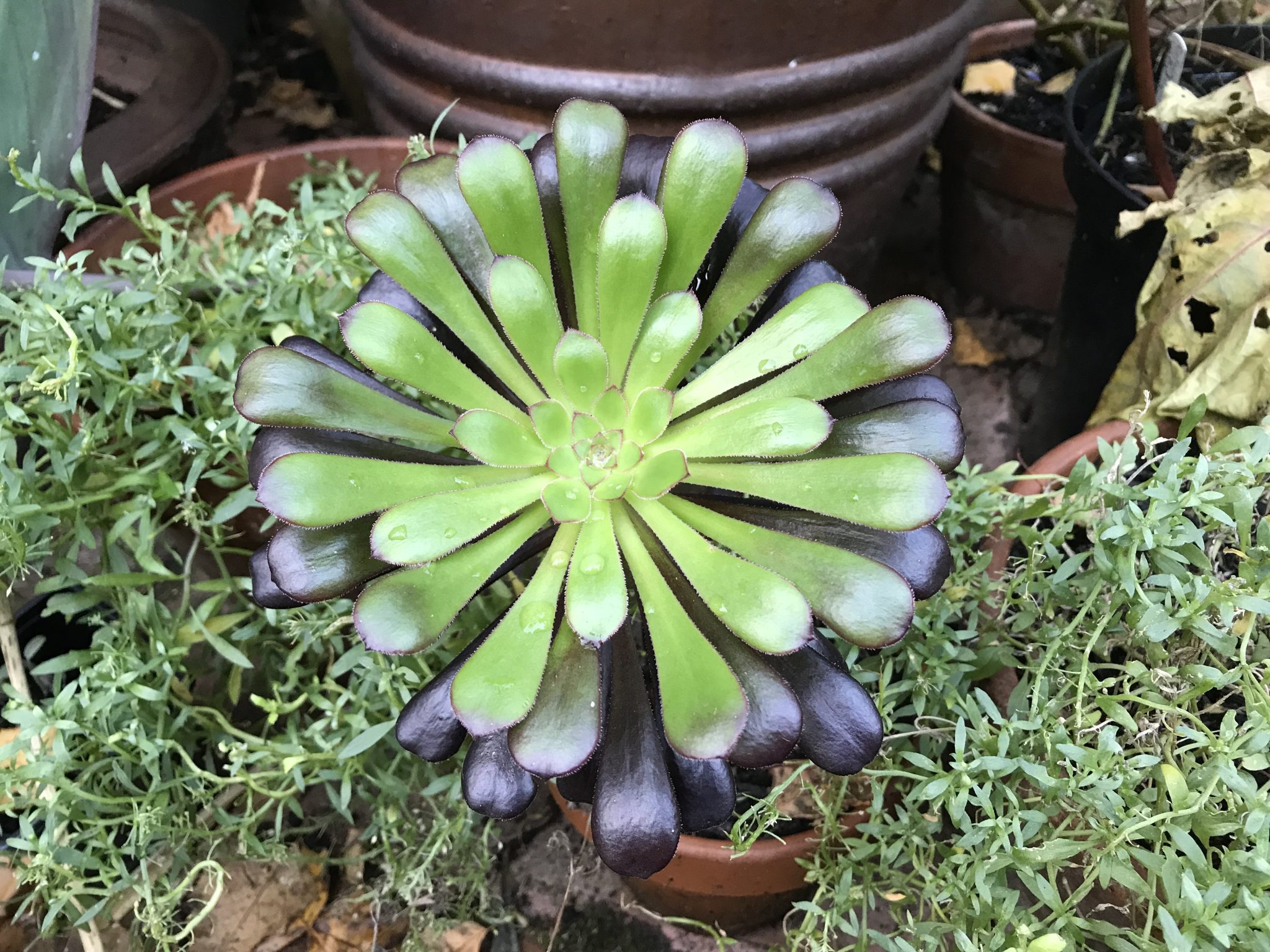 Aeonium arboreum ‘Zwartkop’ is another as I have lots of cuttings from last winter. I saw a green A. arboreum growing on mass around the corner outside happily during the bad winter earlier this year so I’m trying mine outside this year too. 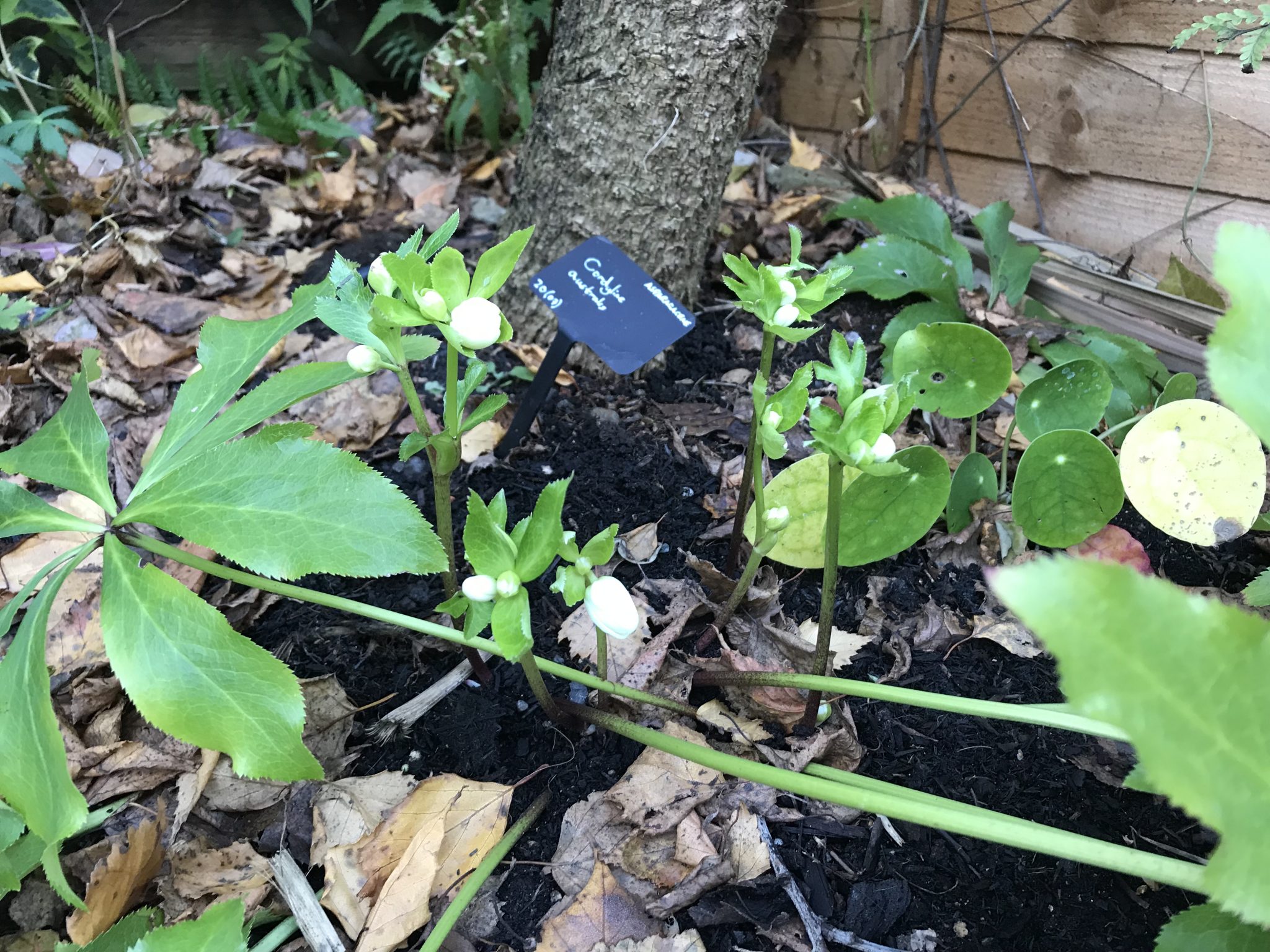 My Hellebores are all a little early to start sending up their flowers this winter, which seems to be a trend because my snowdrops and daffodils are all growing now too. Usually I don’t see them until the new year. Look to the right of this Hellebore and you can see a further temperature experiment with a Pilea pepperomioides cutting. It’s been very happy all summer and is still OK now though some leaves are certainly dying back. I have a couple of Calathea cuttings outside in pots too and they’re still fine. 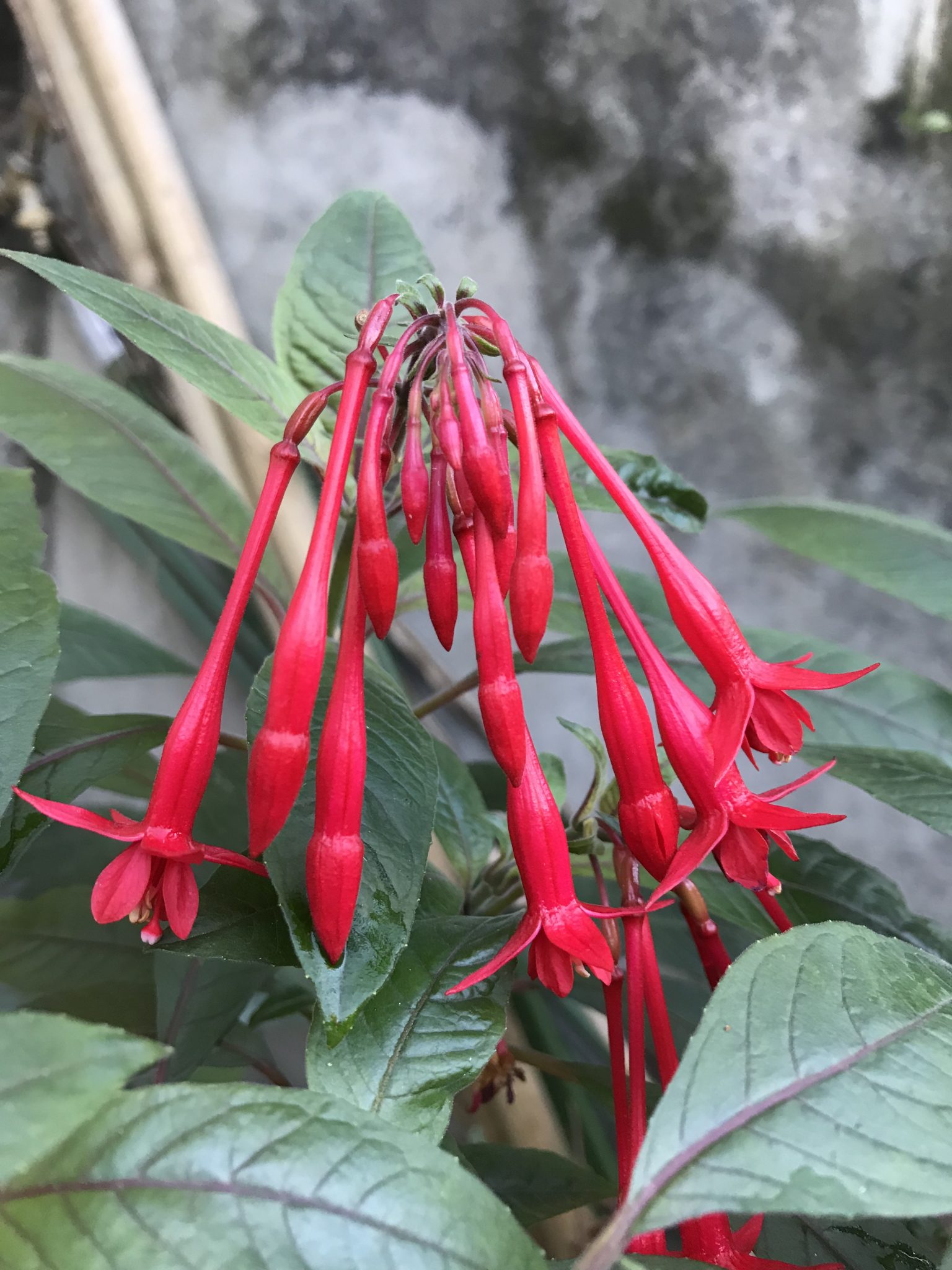 My Fuchsia triphylla is one of my favourite plants and I’ve had this one now for over four years growing outside despite being tender. Though I do offer it some protection in a sheltered corner during coldest moments. Like the Rhodochiton it’s still flowering though slowing down a little. Funnily, even my Brugmansia has the odd flower on. 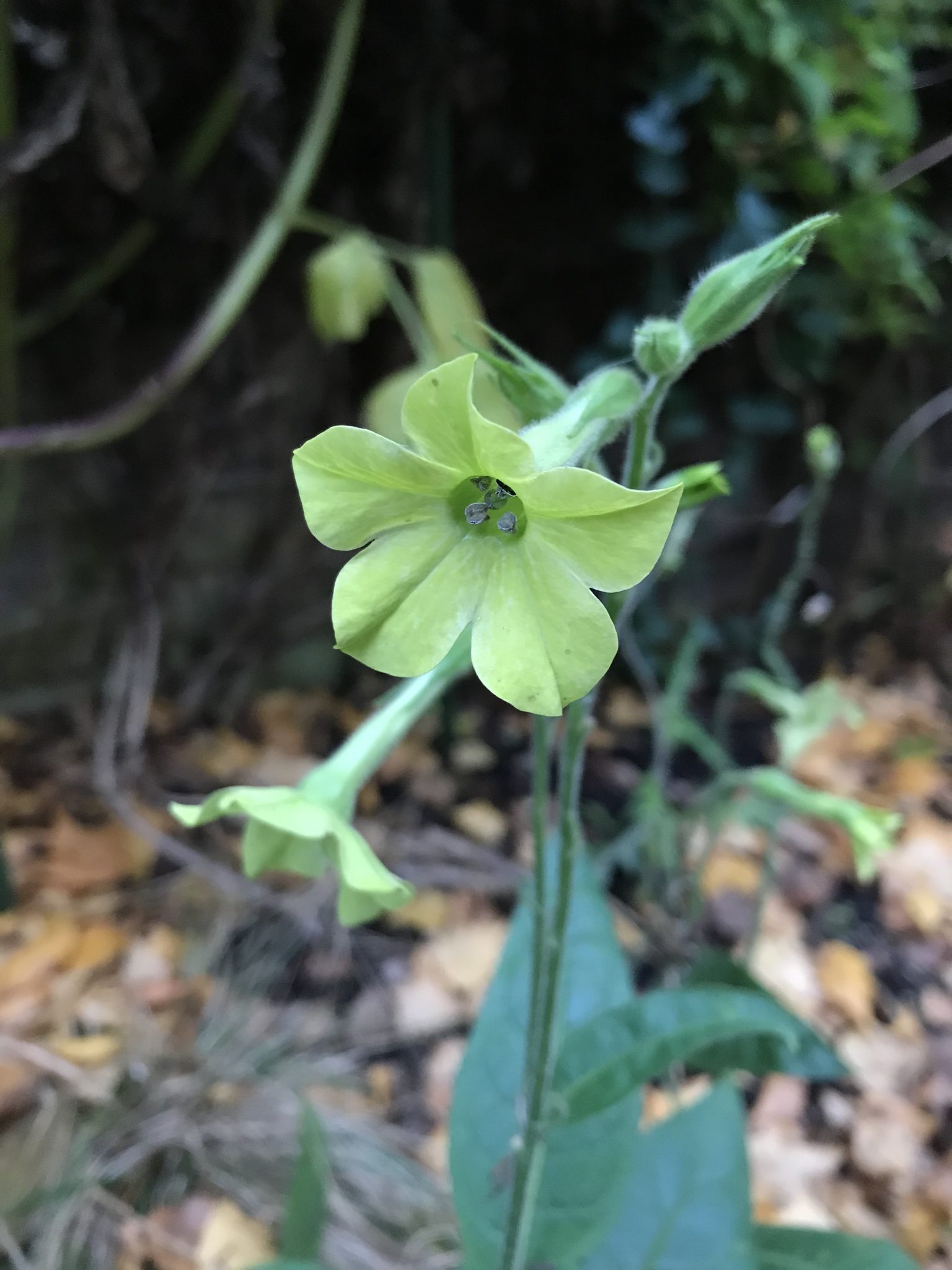 This Nicotiana alata ‘Lime Green’ is flowering though has of course too slowed down. It’s a three year old plant that I originally grew from seed and have found comes back every year spreading quite aggressively by rhizome. I know for most people they don’t survive but in our sheltered raised bed they’re a little too happy. 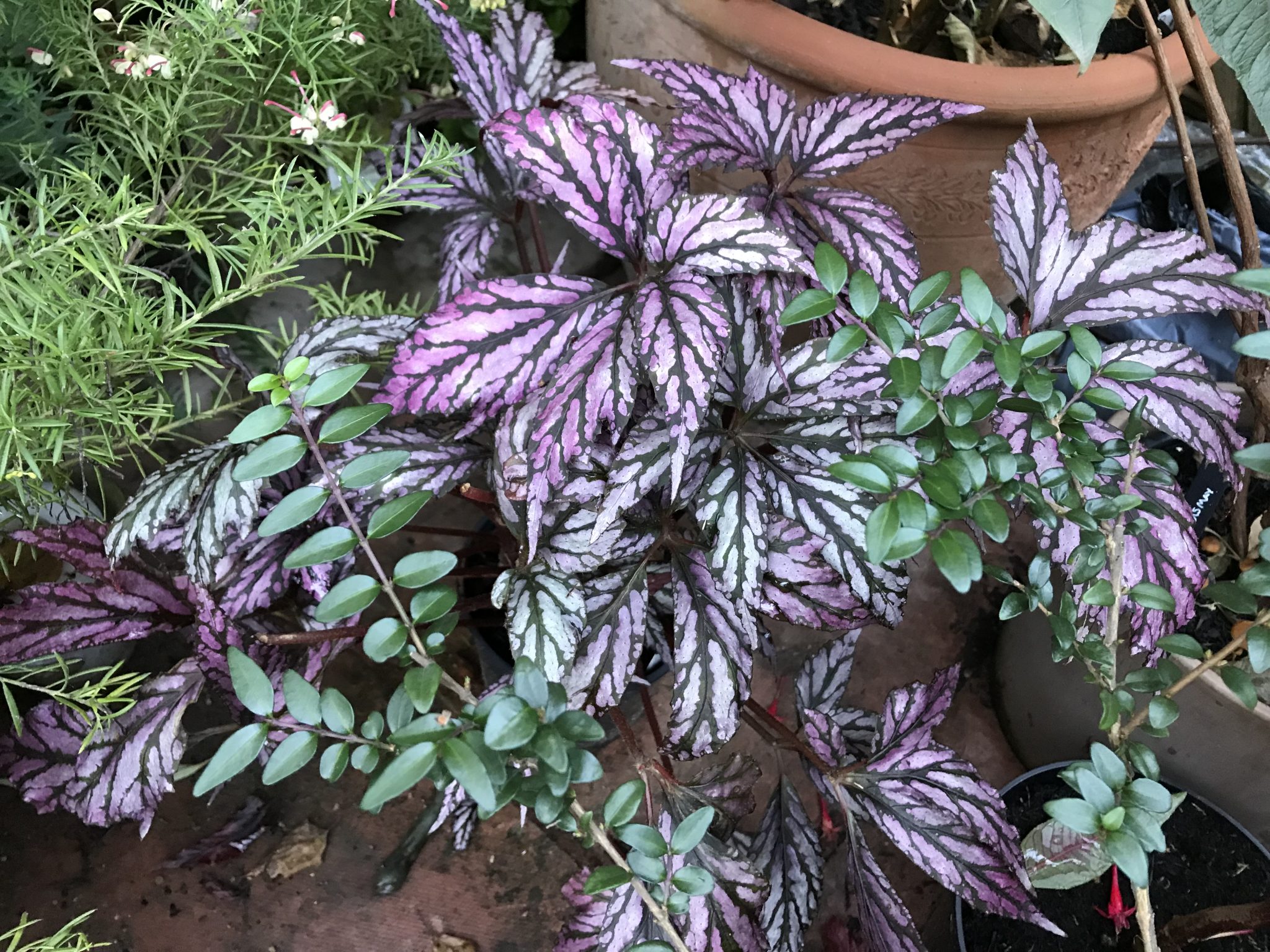 Begonia ‘Benichoma’ is reportedly hardy and I can so far report that it does look to be. 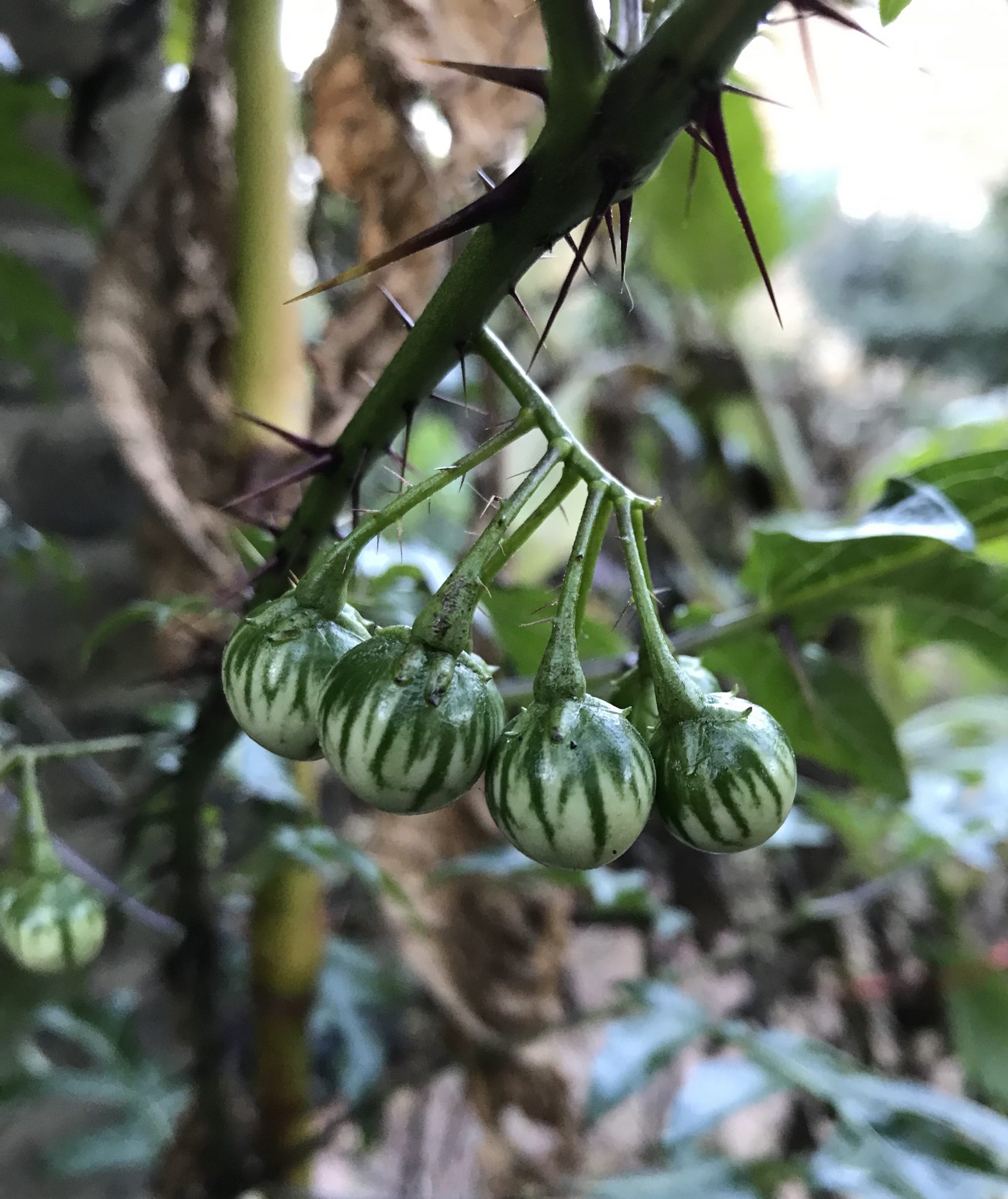 I find Solanum atropurpureum gets too large if left, it will certainly keep growing through the winter here. So I removed the large plant last winter and this is one of its many self sown seedlings. Horror tomatoes (don’t eat them!) 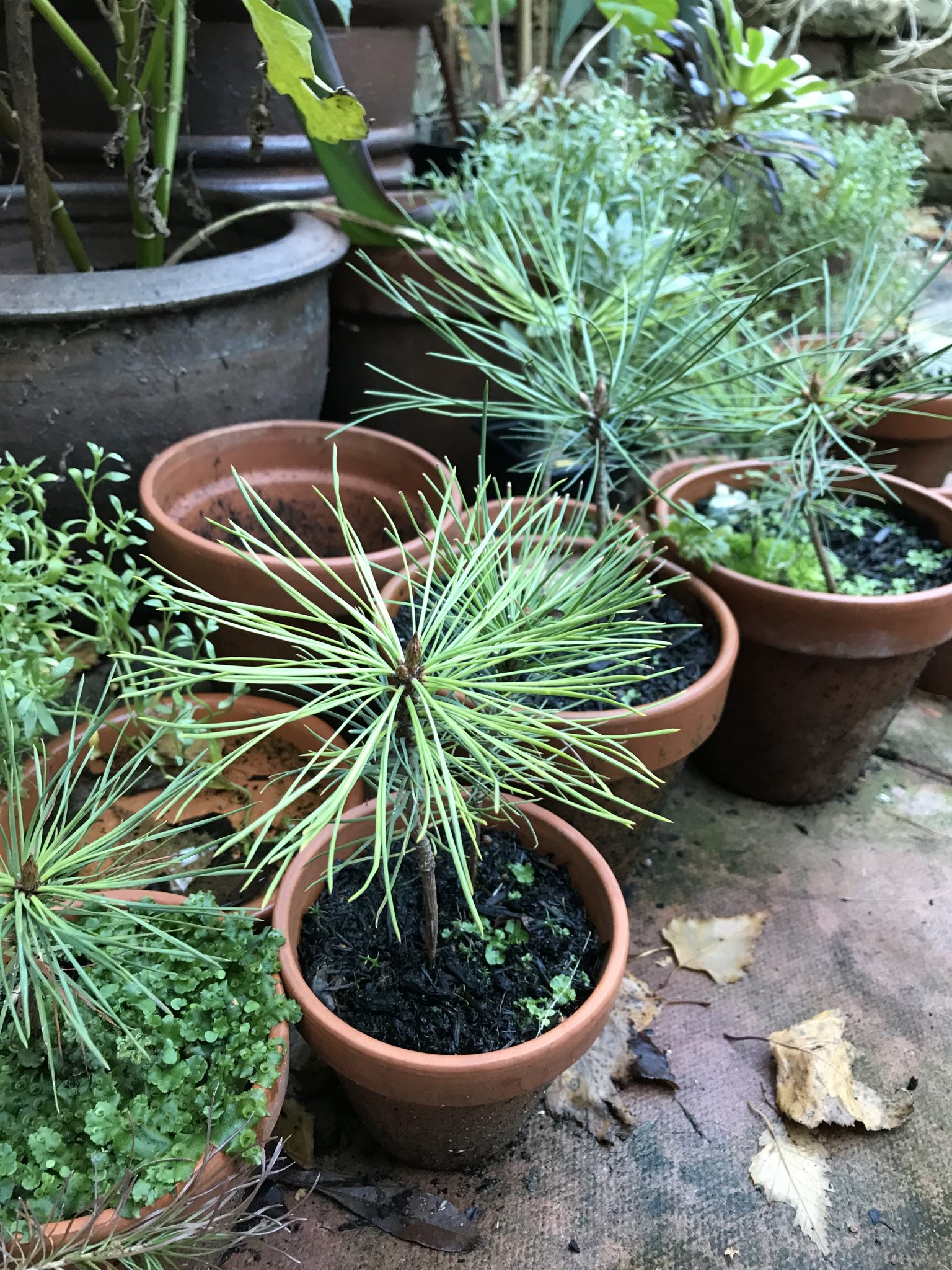 In terms of other, hardier plants, my seed grown pine forest looks very happy with plants now going into their full third winter (the first was when I sowed them) looking particularly happy. 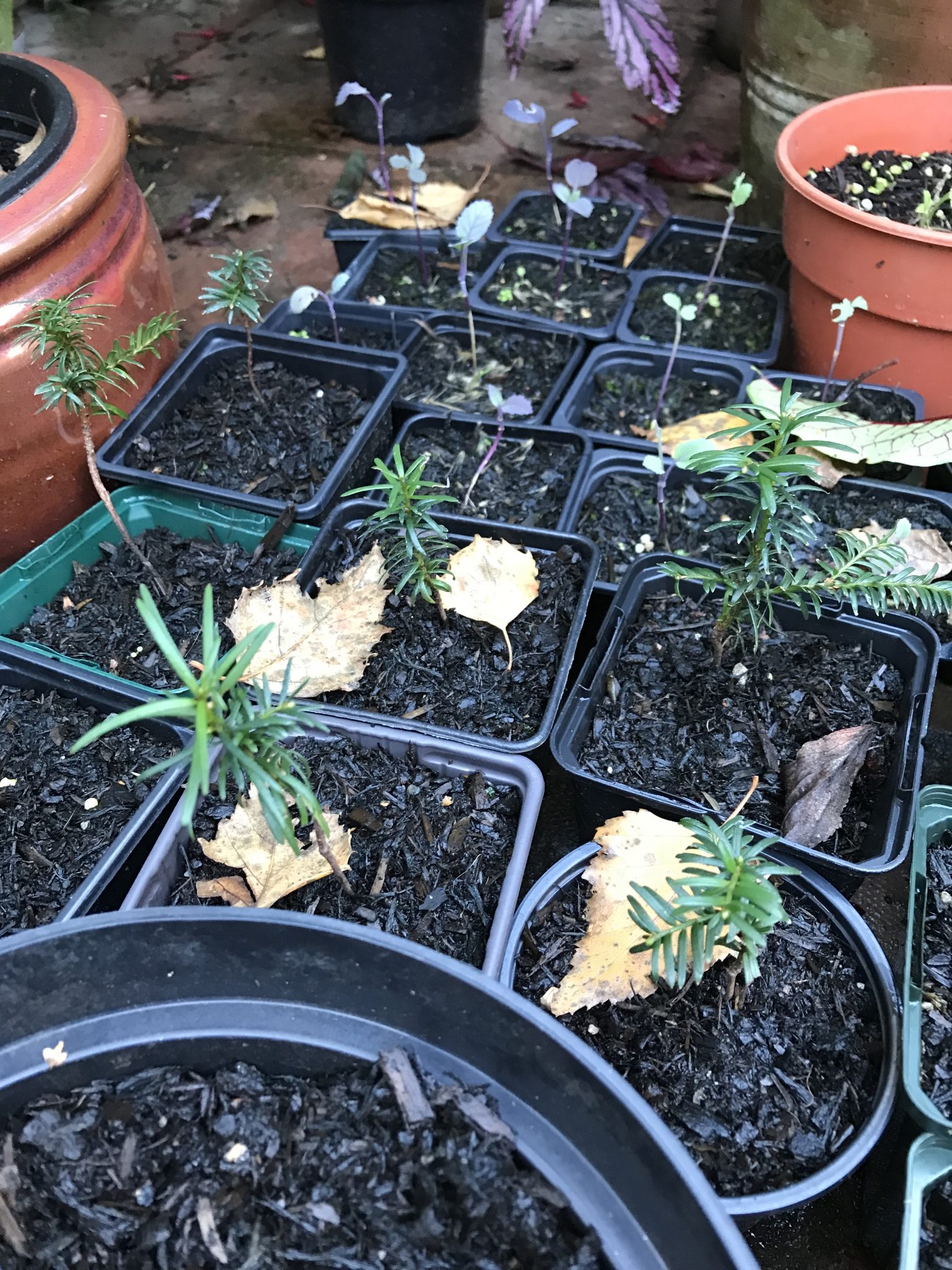 I plan to replace my three Viburnum tinus standards with topiarised yew one day and these are hopefully those plants. It will take a few years but I have some nice shapes in mind. The design for the shapes I came up with when first planning the garden four or so years ago and I still want that shape. We’ll get there one day. 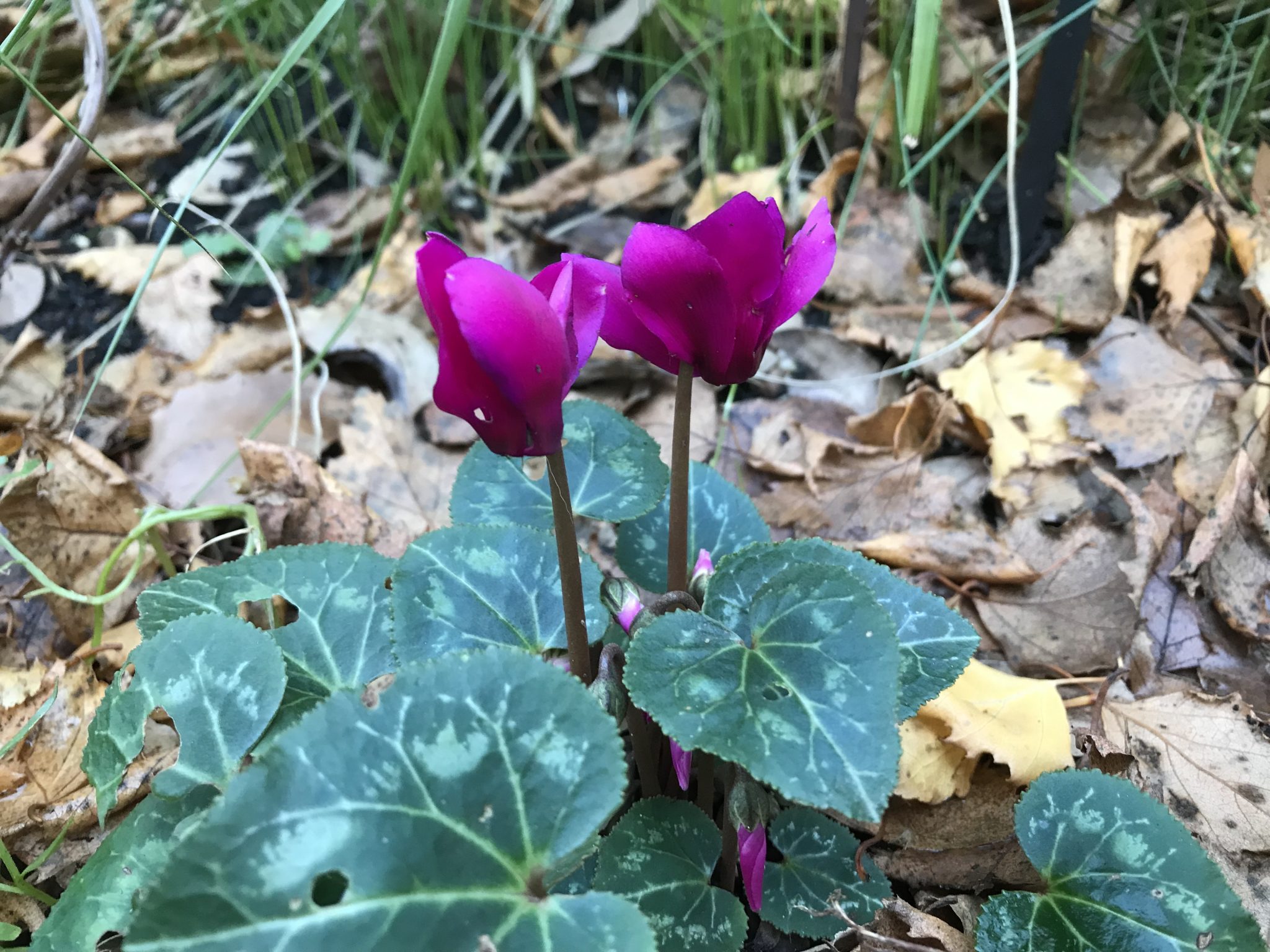 Cyclamen persicum doesn’t get the love in gardens that C. coum and C. hederifolium receive because the leaves aren’t as pretty. It’s simply not as daintly. However it does have some of the best colour flowers and with some good dead heading can be kept flowering from autumn well into spring here. Of course, this one is late to the party and my white flowered C. coum will soon take over to work with the snowdrops and hellebores. 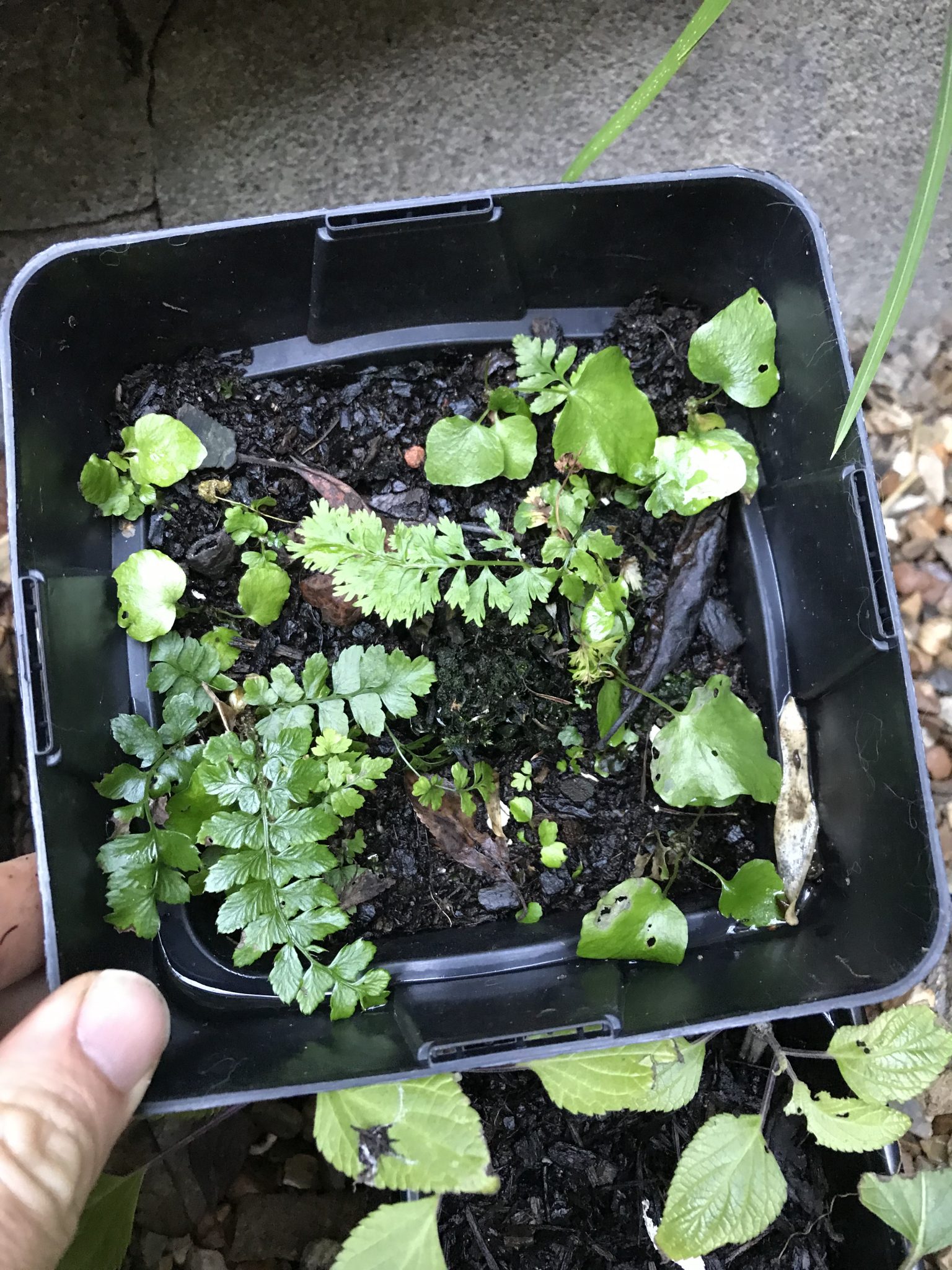 Interestingly my ferns have been frisky as their progeny seem to be appearing everywhere. As I have fifty odd different fern species I’ll need to wait until they’re larger to see what I have. In this pot alone I can already see at least four different species. Exciting. 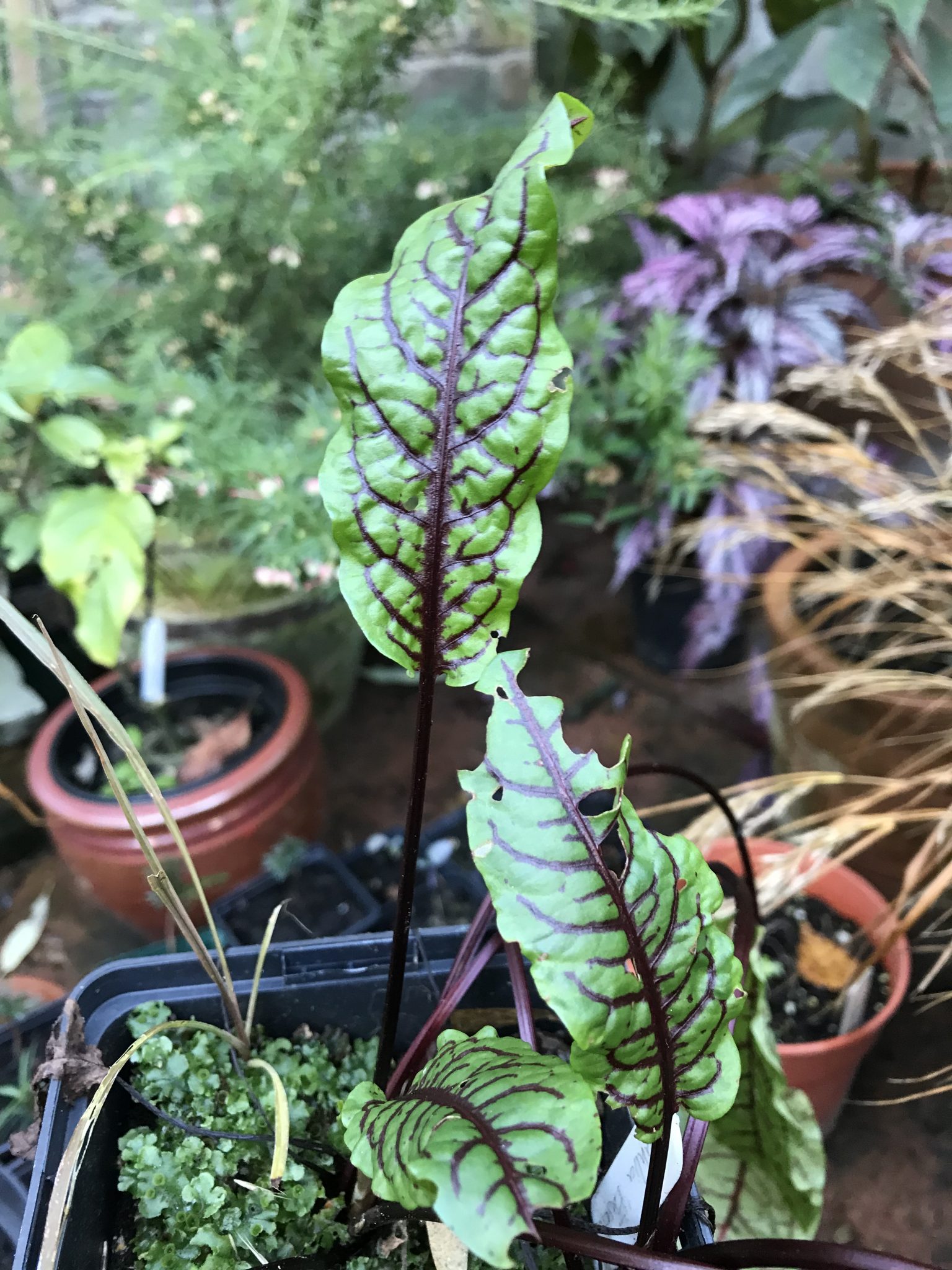 Food wise I tend to grow most vegetables on my allotment these days though I do often start plants from seed at home to be able to water them. Above is bloody sorrel and below are my overwintering peas making great progress to be planted out on the plot in the next few weeks. 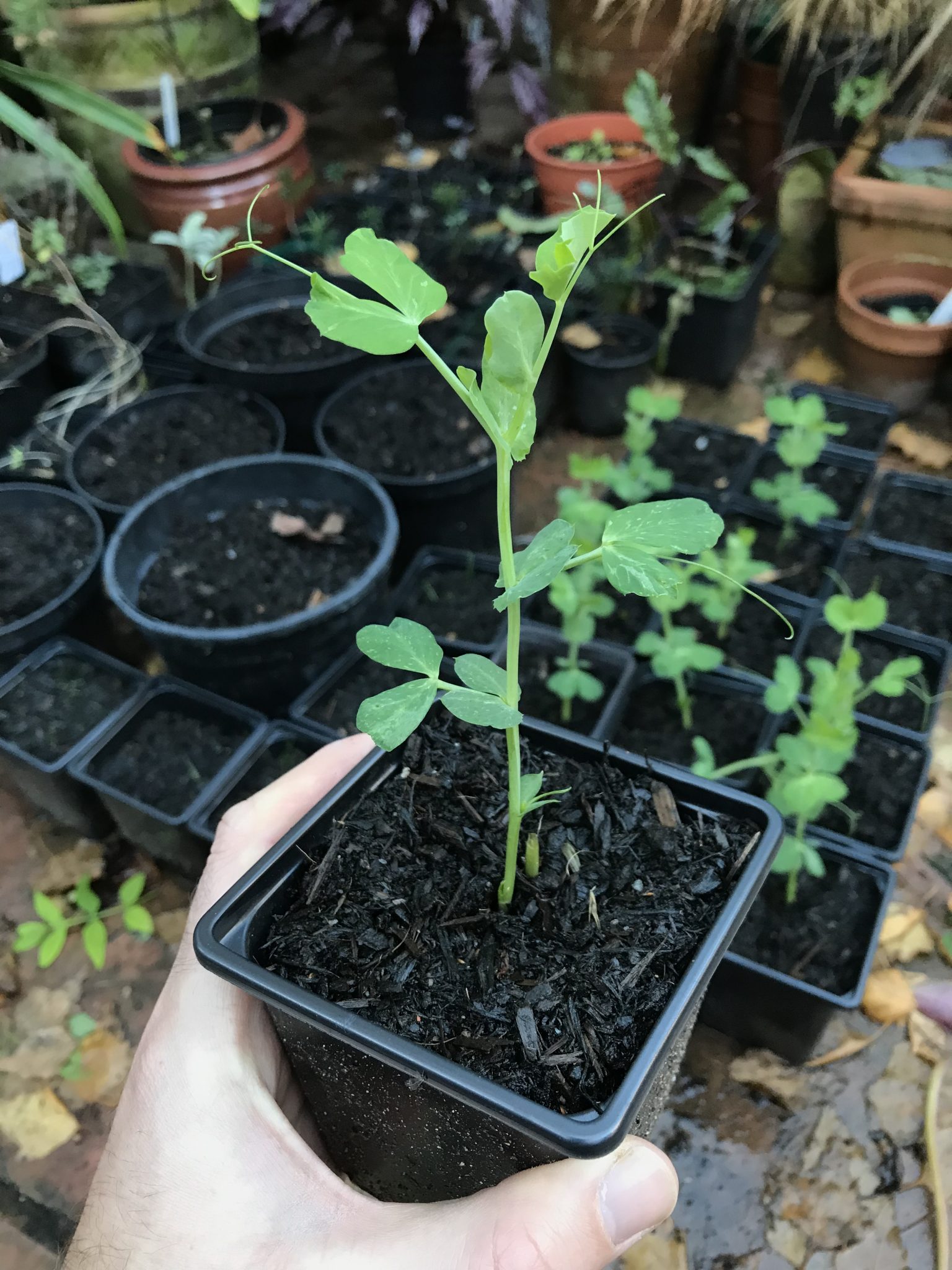