I’ve been thinking for a while that something is up with our small garden and these are the problems:

To remedy this list I’ve already removed the table and plan to replace with new space saving chairs in spring and I am going to reduce the number of plants. I want high diversity but even I know when I’ve gone beyond my diversity limits. Irrigation, which I’ve been resisting for the love of watering, is coming finally too to help in the event of another prolonged drought in summers.

Our garden is largely made up of plants in pots on our patio and I feel it’s time to exercise a major benefit of this: pots can be moved. A reshuffle then. All of the sun lovers down the side alley are swapping with the little shed, which currently sits in a sunny corner. This isn’t ideal because I didn’t want to make the alley less usable but the reality is that only I use it, so making the most of space on the patio end is important. Plus it’s the main vista from our bifold doors which is on show year round.

Which takes me to what I think is the garden’s burning issue, the fact the jungle illusion has been broken for two years by gaps in plants looking into neighbouring gardens. I have no problem with such views in London because in a city there is no such thing as privacy but I do want that jungle illusion back. Informal hedging is the answer.

Last year I planted Lonicera nitida, which I love for its fuzziness, Fuchsia ‘Burning Embers’ for its shade tolerance and dark flowers, and Leptospermum ‘Kiwi’ for its unusual flowers and tiny leaves. These are along the back of our raised bed to form a low, narrow hedge as a backdrop to the planting in front. They’ve been slow to establish but are now putting on good growth. To these I plan to add a Grevillea I have in pot, helping with the patio declutter in the process. I’m also considering replanting my small Hebe ‘Wiri Joy’ here too. It used to be in the raised bed until I wanted more perennials and took it out, though it’s never been entirely happy in its large pot. 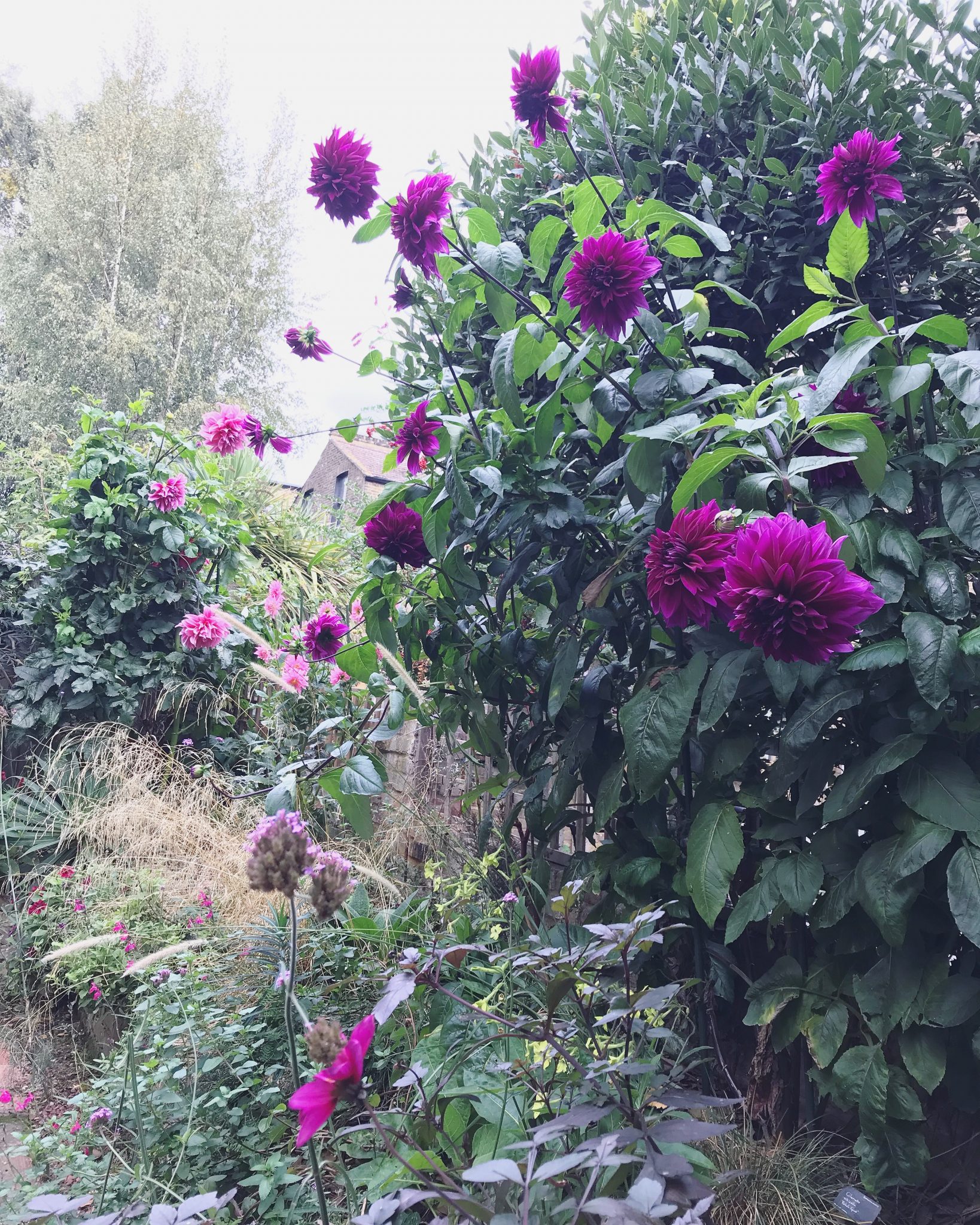 Our main raised bed border in Autumn, colourful but you can see a gap by the low fence in the middle that breaks the jungle illusion.

I’m conscious that all of these shrubs are going to reduce the flower power of the raised bed in late summer. However I like the textures and I think the jungle feel and lower maintenance is worth giving it a shot. I’ve also been increasingly interested in shrubs, they have a structure and permanence perennials tend to lack.

All of this tidying and rejigging isn’t an exercise in shallow looks, I enjoy the process of the garden jigsaw, constantly evolving and requiring our hands to reshape it each year as it does. Primarily I need the garden to feel more of a sanctuary and an escape, somewhere to sit and imagine and day dream.

One thought on “Pot’s Growing On in November? Hedging my bets”