Who knows how the laws of the universe work. Across the entire site my allotment is on I’ve never seen any foxgloves at all. Last summer I chose to leave a tiny weed in the middle of my brassica bed, who knows why.

It grew and I began to suspect it was a foxglove, then I was sure. So I left it. I didn’t really think about it until I noticed its spike had white-ish buds. 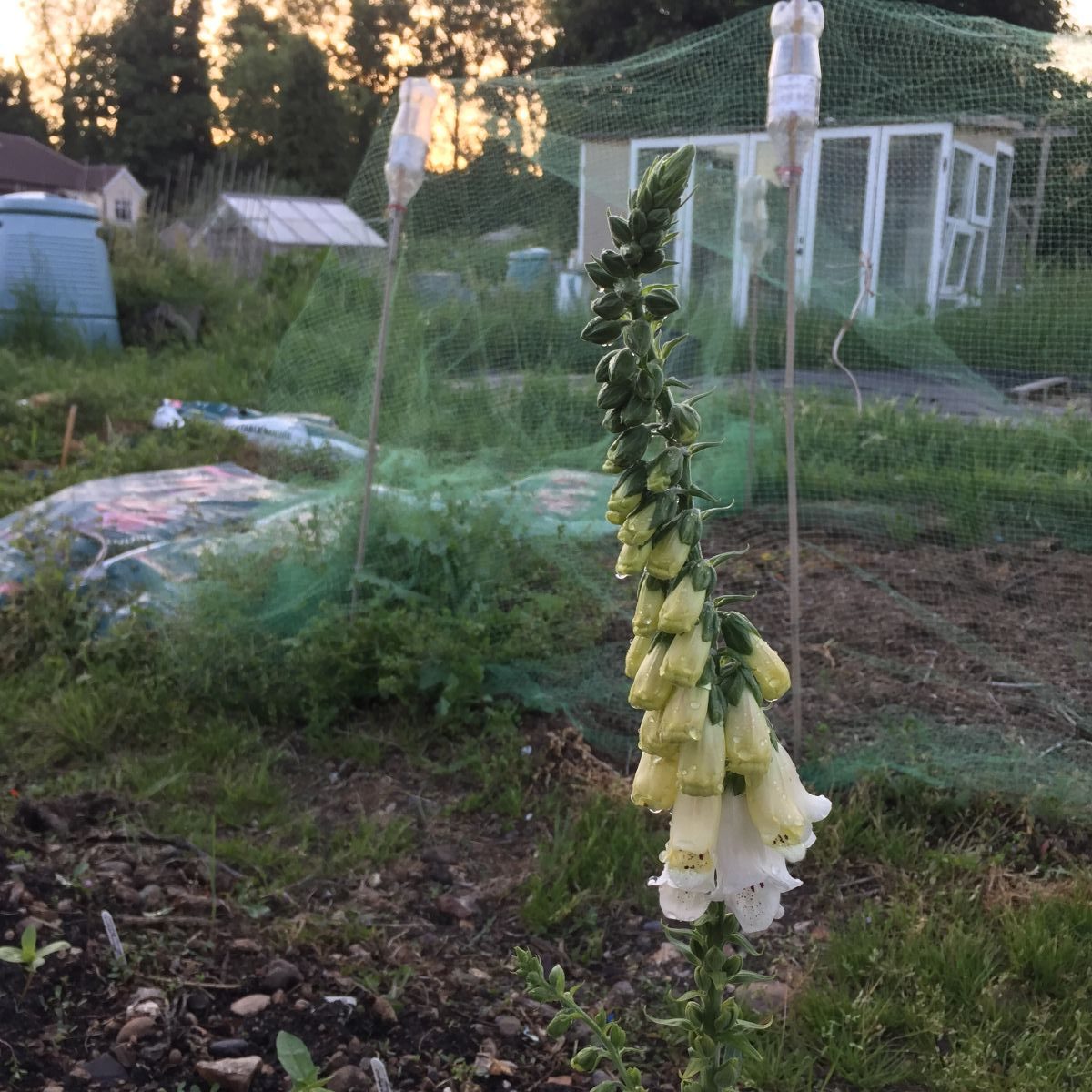 This week there it is, my favourite flower of all, Digitalis purpurea f. albiflora something I’ve never grown myself in our garden because that would spoil their ethereal natural quality. Somehow a wild foxglove seeded itself in full sun on dry soil on my allotment and it happened to be the white variety.

I wasn’t expecting it but I had no reason not to suspect it could be one. How it got there, why I left it and why, after keeping it, I chose to neglect it until now I’ll never know.

This year I will let it self seed and will potentially whittle out the seedling to leave only the white ones.

The word gardener comes from the noun for a person who cultivates inside a walled enclosure. Personally my definition of the word gardener is synonymous with humanity itself and the choices we can make.

We can’t save everything but we can choose what to protect. We have the capability to nurture our gardens and beyond by watching and understanding them.

This applies to the wider world too and surely it’s time we chose to protect what little natural habitat we have left on this planet.

May has been an incredibly busy month for me, creating gardens for a few people and the Chelsea Flower Show. I’ve enjoyed all of it but my allotment has suffered with much less of my time. Weeds have taken a hold in the recent downpours and warm weather.

Last Friday after work I managed to catch up with a few key jobs. Luckily, the allotment comes complete with its own snacks… 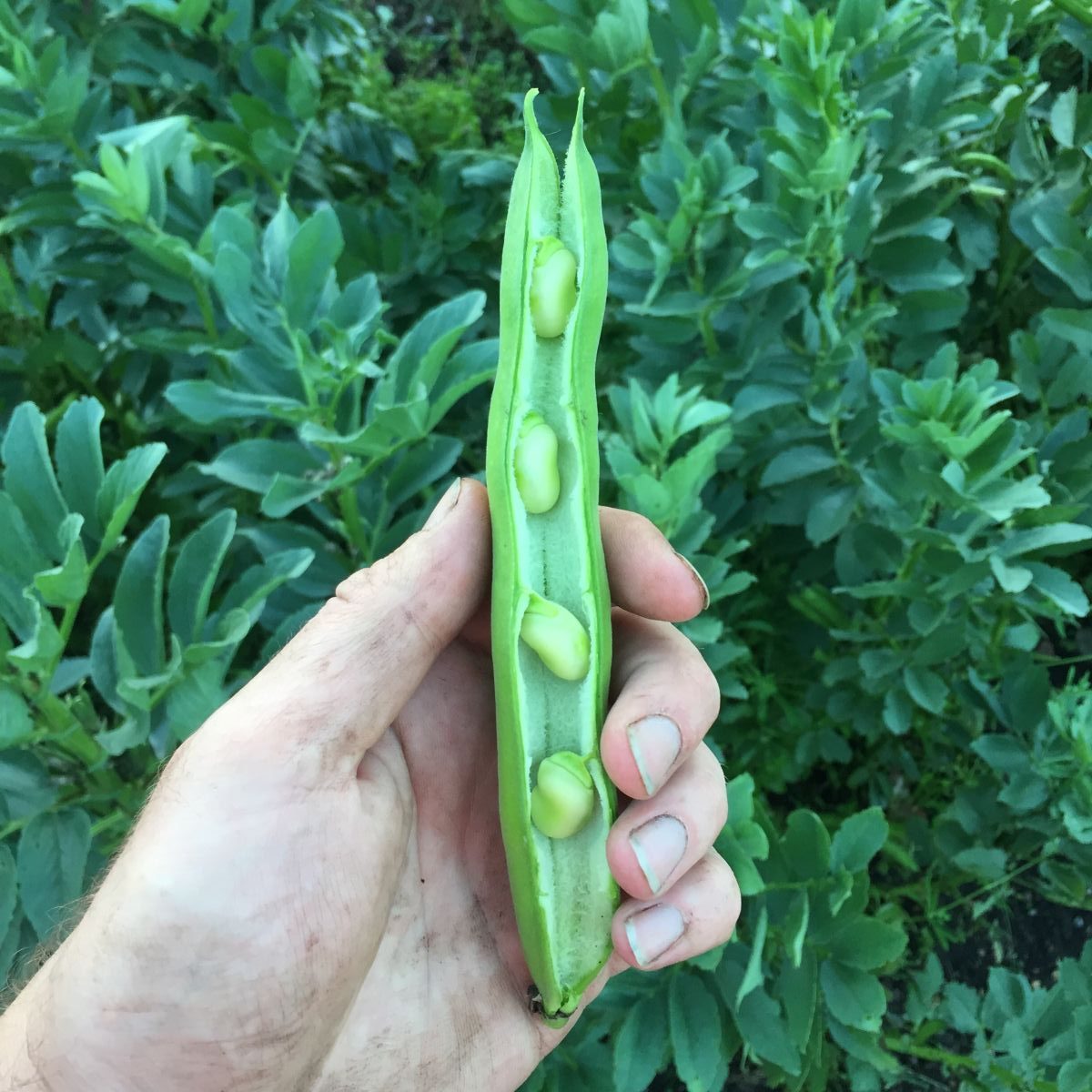 Our broad beans, Vicia faba ‘Aquadulce Claudia’, are a really good variety for overwintering. I like it and last year I saved some seeds and sowed those following organic and no dig principles, so our abundant pods this year really were free (and tasty). 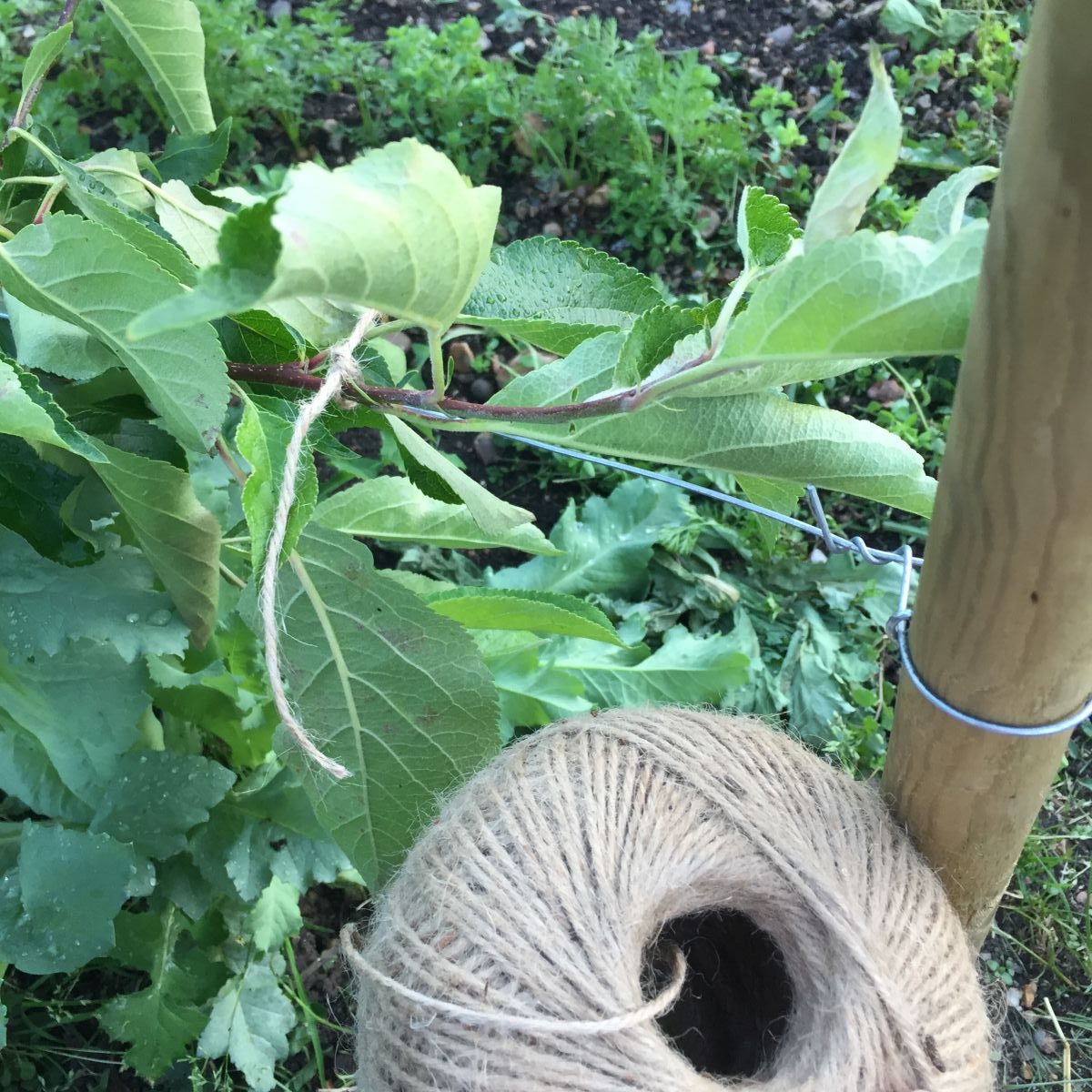 I have three different cultivars of dwarf apple trees that I’m training into step overs. It’s all going well and this week I tied in the main lateral branches to a simple structure I’ve built.

They seem to be very healthy, the only tiny set back being one that had a strip of bark removed on a main branch by a rat or mouse in winter causing that branch to die. However, new shoots are growing which I’ll train in as a replacement branch – so one half of that step over will be a year behind. No problem. 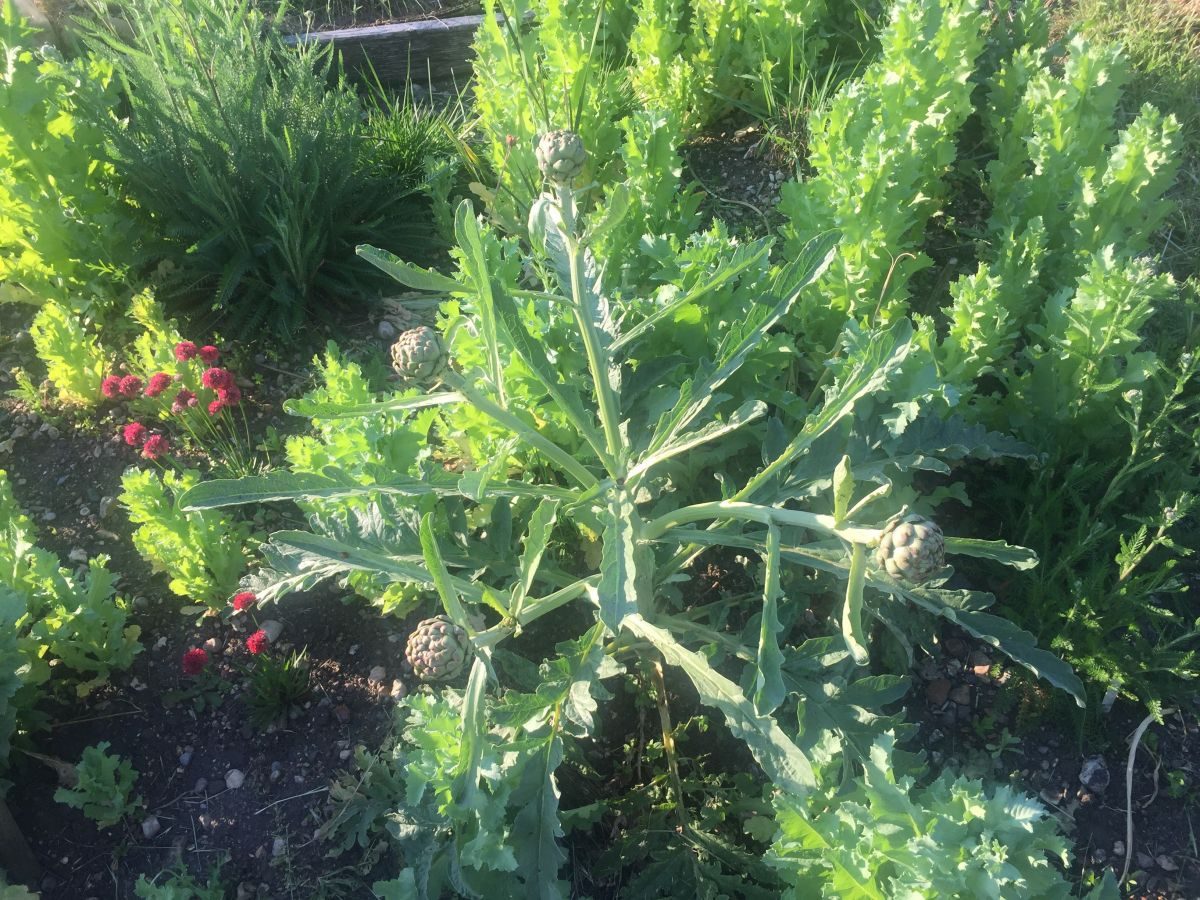 This gangly artichoke, Cynara cardunculus ‘Green Globe Improved’, may look sprawling but I’m so proud of it. I sowed it from seed last spring, it overwintered through heavy frost and now it has four flower heads forming. So often my heart is lifted by something I can barely believe has grown from a tiny seed. 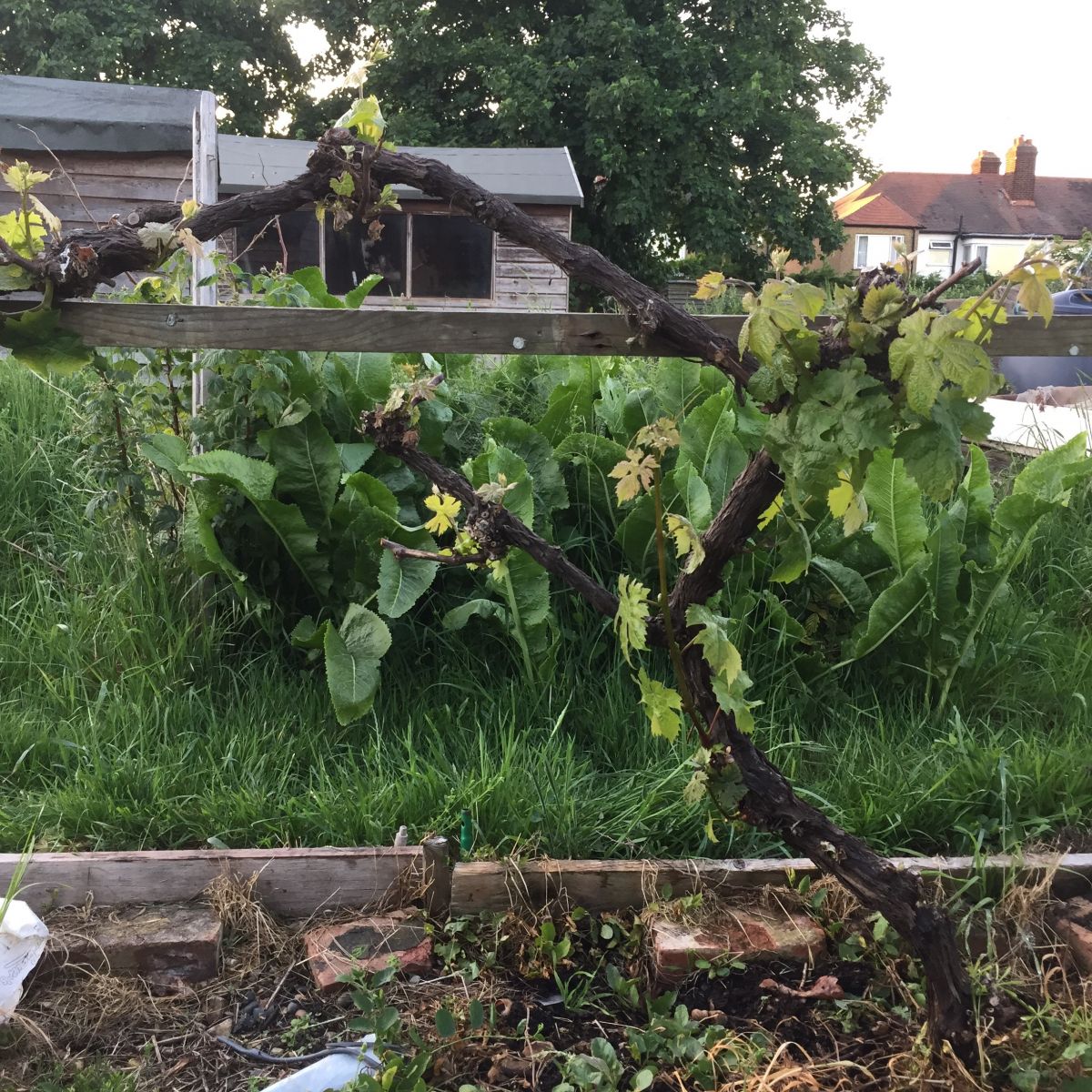 A grape vine that came with my allotment is a strong grower and this year I’m determined to get some grapes from it. I’ve pruned it back into some kind of shape and intend to pinch out the growing points the moment the first bunches develop.

Raspberries are starting to fruit up for summer now. Other perennial produce include my asparagus bed, the plants are largely looking alive if a little weak – many stems grow and then flop in the wind. Is that normal?

My new cut flower bed (by coincidence now where the foxglove chose to take up residence) is going well. Most of the seedlings are now apparent so I can finally weed properly without fear of ripping out the wrong thing.

Dahlias are all generally growing strongly in their bed, which is definitely a separate distinct thing and not a second cut flower bed. Honest…

I feel behind in my vegetable growing compared to last year but actually I reckom we’re neck a neck. I’ve had a few losses (onions from seed) which is always disheartening but the broadbeans, peas, carrots, garlic, potatoes and leeks are doing well.

The parsnip bed is completely weed ridden. On weeding out everything, I’m worried I may have weeded out the parsnips leaving what I now think are turnips! Time will tell. I wanted to grow many more parsnips this year so fingers crossed.

Brassicas I’m growing from seed at home in trays as usual. So they will go out in the next week or two.

Living on a prairie 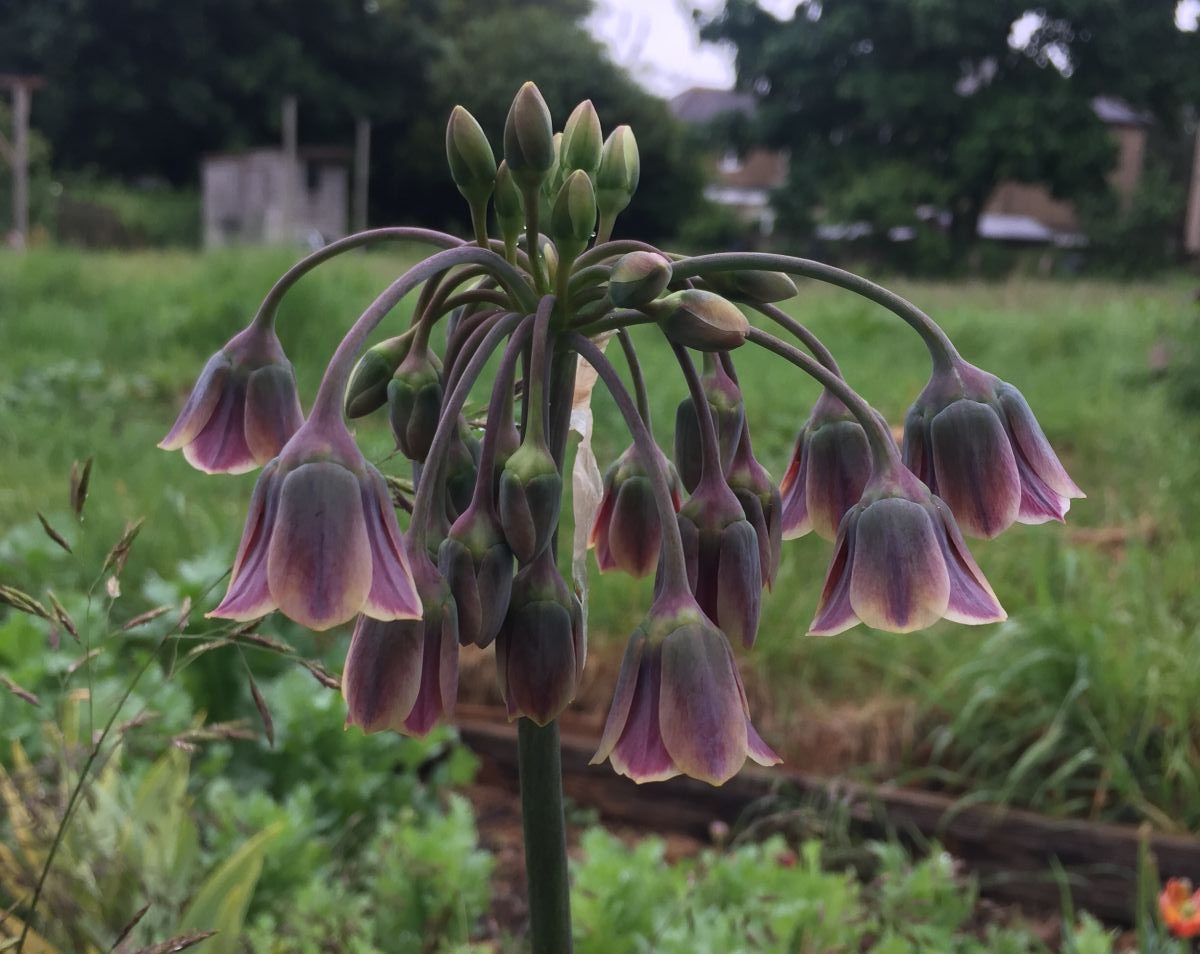 Nectaroscordum siculum has been slightly odd on my allotment. I planted ten bulbs in my prairie design experiment, approximately half didn’t make it through winter and died. The others have leaves but the flowers flopped. This photo is of the only plant that made it through to flowering – it certainly seems strong. Apparently these reproduce readily, so I’ll look to bulk up numbers for next year.

That’s it for me in May – can you believe it’s now June?! – how are your gardens and allotments going? I’m always interested to hear.