On Sunday I had the chance for a proper sesh down the allotment and it was marvellous! The sun wasn’t shining and it was a bit chilly but all the better for some weeding. 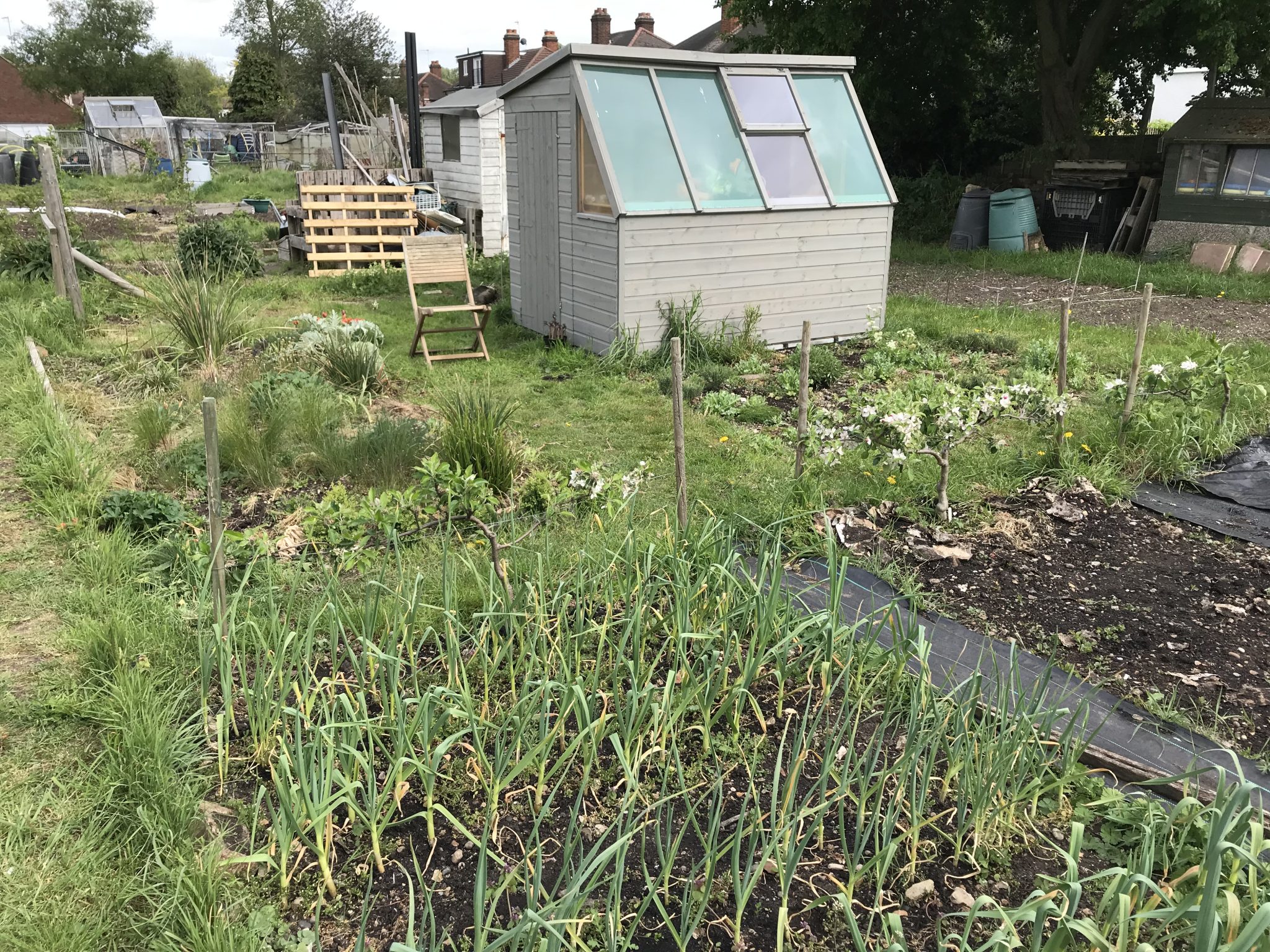 I always pull out the weeds with a slight sense of regret because I like them, in fact I often leave them. But folks, it was time. The asparagus bed had sprouted more field bindweed than I’ve seen before. Weed suppressant matting over winter makes no difference to bindweed because it dies back over winter anyway. In summer I grow creeping nasturtium in between rows to smother weeds.

Asparagus are a real pain to weed because you can’t use a hoe around their crowns in case you damage their roots and shoots. Nothing for it but to crawl around with my trusty hand trowel.

I’ve sown my carrots too closely together to hoe, doh. Instead I used my hands and picked them all out. Took forever but gradually the carrots will start to fend for themselves a little. Carrots are doing well this year.

You can see how stony the soil is on my allotment site. Traditionally you would sieve out the stones and that’s something I recommend, especially for root veg as stone free soil means less wonky split roots. I don’t bother though, ever. I don’t care about wonky veg and I simply don’t have time to sieve stones endlessly. I’d rather grow the veg. Admittedly they make my photos look pants but I can’t eat photos. 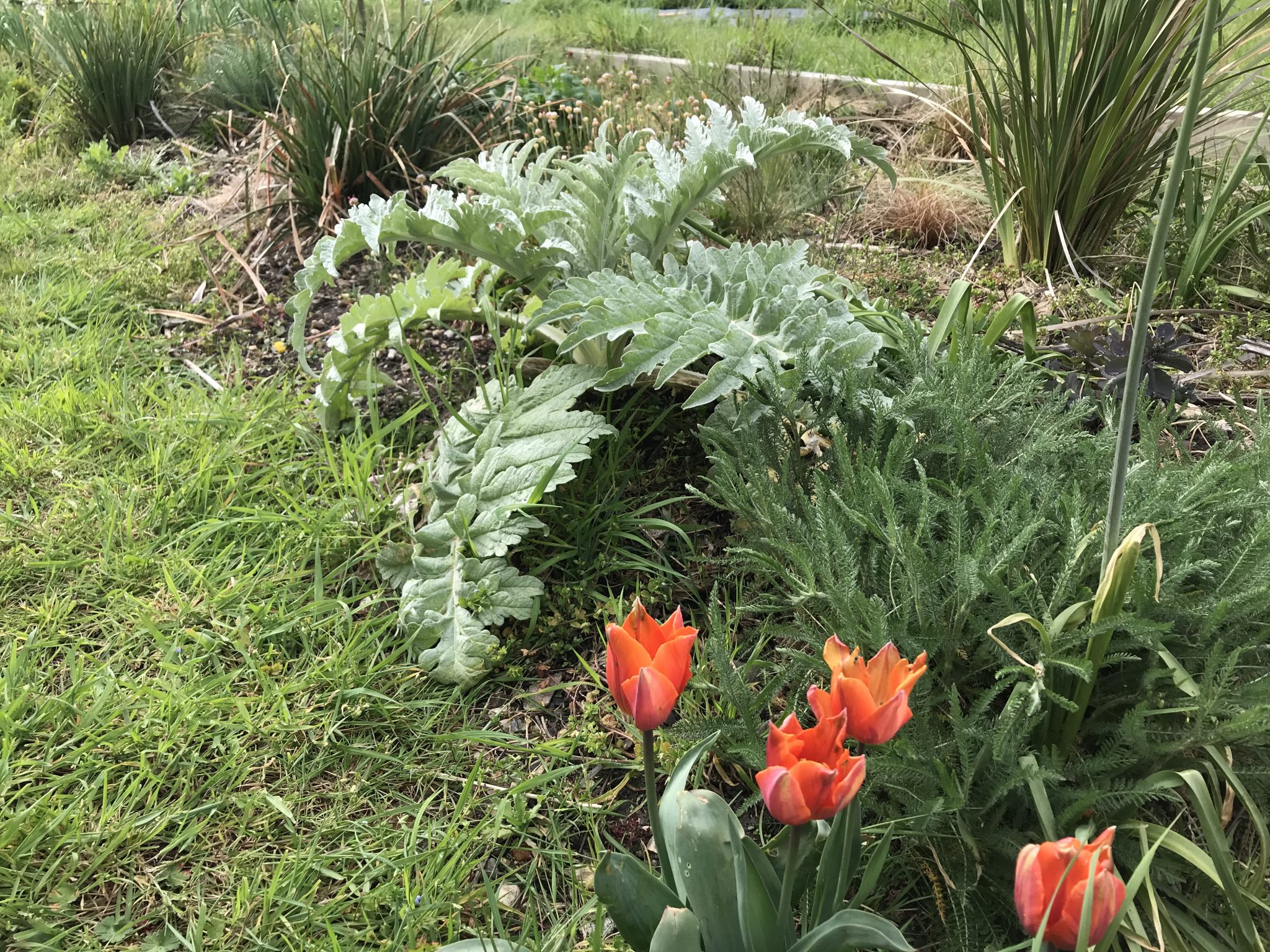 This beautiful ‘Green Globe Improved’ I grew from seed four years ago and it does well. I love artichoke for the scales and heart. Often I leave it to just flower as part of my mini prairie.

Potatoes the no dig way 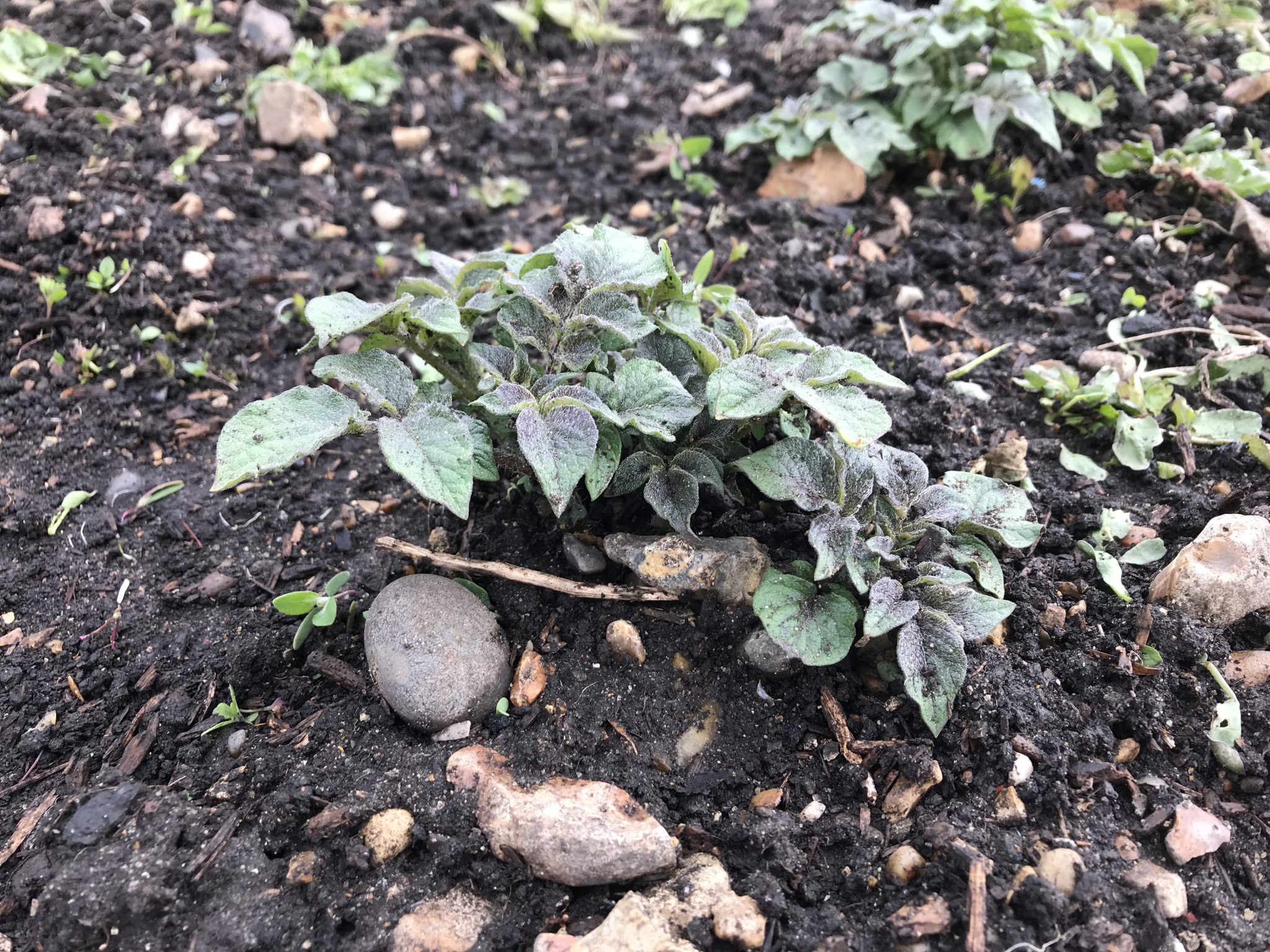 Last year we had a potato bonanza by not digging a trench and instead burying at 10cm deep and later earthing up. You have to earth up enough to make sure the potato tubers don’t green with sun exposure. I’m growing eight different varieties this year, mainly my fave new potatoes and they’re almost all growing above ground now. I’ll give em another week then they’ll be buried alive! Again. 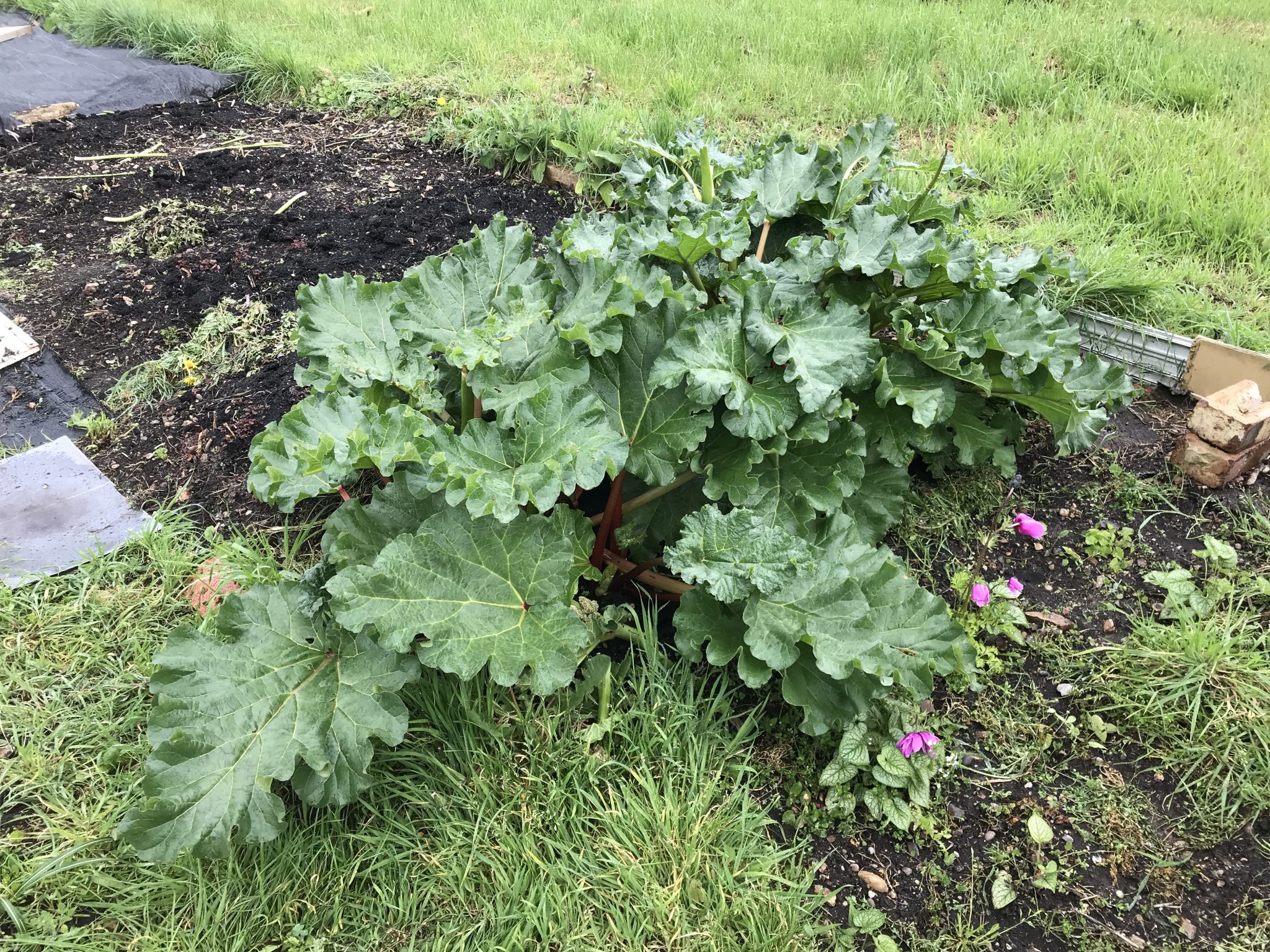 Not much to say about my trusty rhubarb but it’d be rhub not to mention it. It’s growing strongly and we’re eating rhubarb for dessert every week. What a superstar. It needs loads of watering at the moment as spring has been so dry and I’ve been fertilising it with compost and liquid seaweed to keep those red sticks a coming. 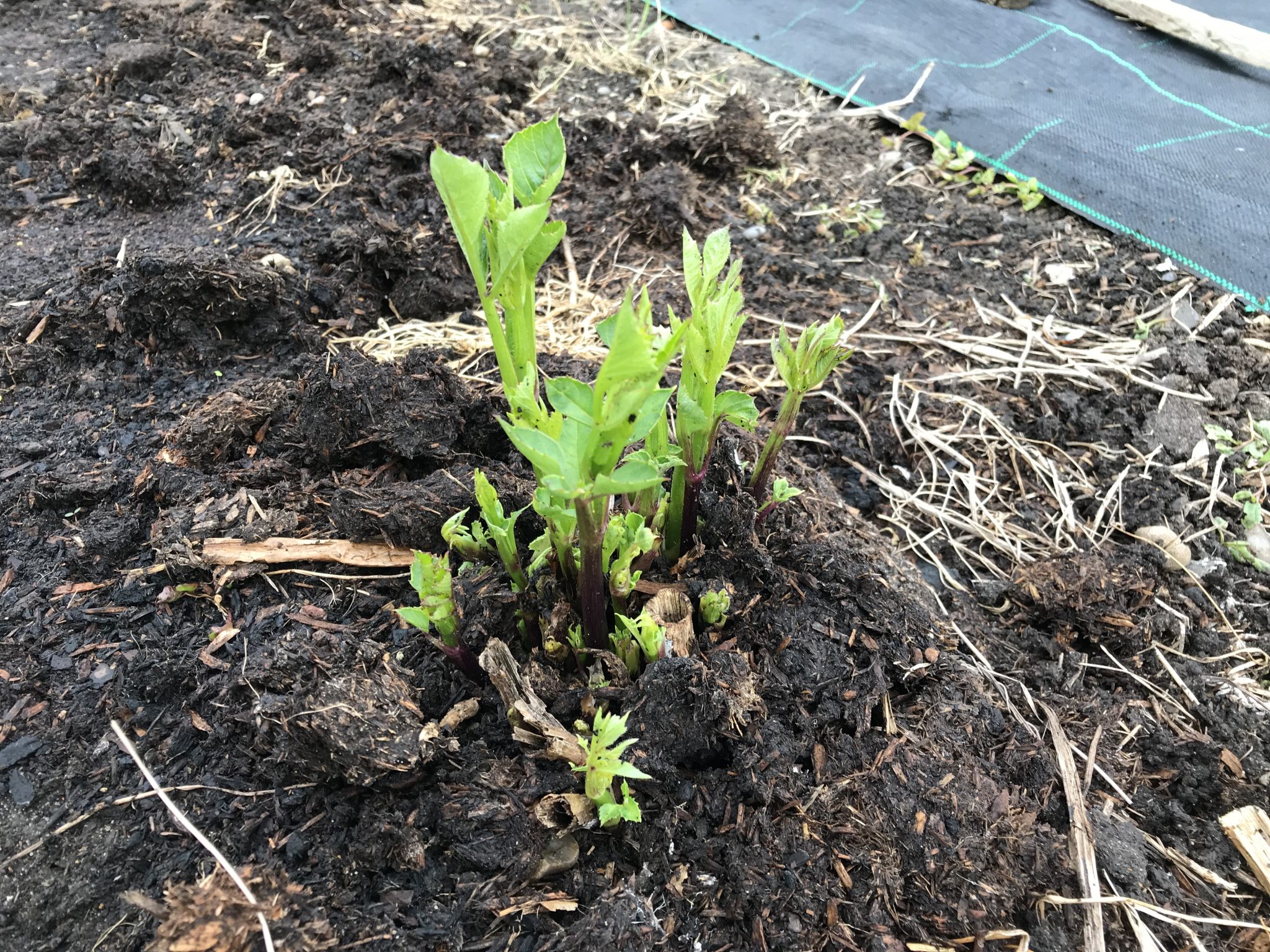 I unveiled my dahlia trial bed the other week (removing weed matting) to find most were already growing. They all seem to have survived outdoors as usual here in London where it’s warm enough. Our sandy and pebbly soil here helps with drainage too. Left in the ground rather than digging up allows dahlias to become real monster plants, demonstrating the fact they are thug plants. You’d think more shoots were good but actually I’ll thin them out to three or four main shoots only and I’ll be taking some cuttings for my design clients who’ve requested some. The dahlias are all growing like mad at home too, so as long as there isn’t another drought this is going to be a good year for the dahlias. Oh, I’ve weeded the bed and added lots of compost as mulchy dressing of nutrients. Once they’re a bit taller I’ll barely have to weed around them as they easily outcompete everything else. But they will need support (more on that in a future update). 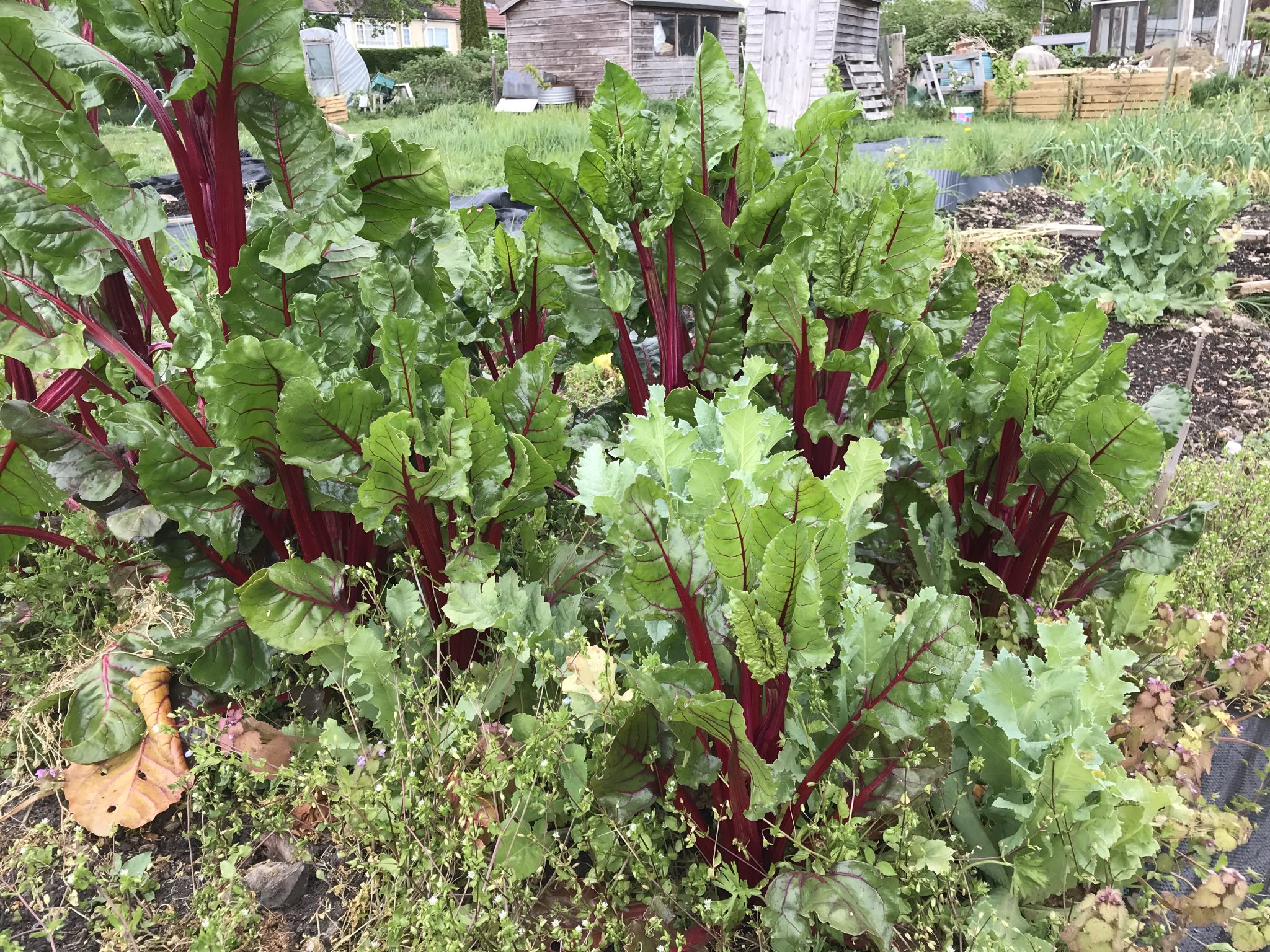 I always have some ruby chard on the grow, it’s an easy crop and tastes great cooked with a little butter or olive oil. This lot were sown last summer and are still going, having brushed off winter. Some have started bolting which looks cool and the leaves are still good to eat. I’ve sown a new row for a summertime batch along with lettuces. 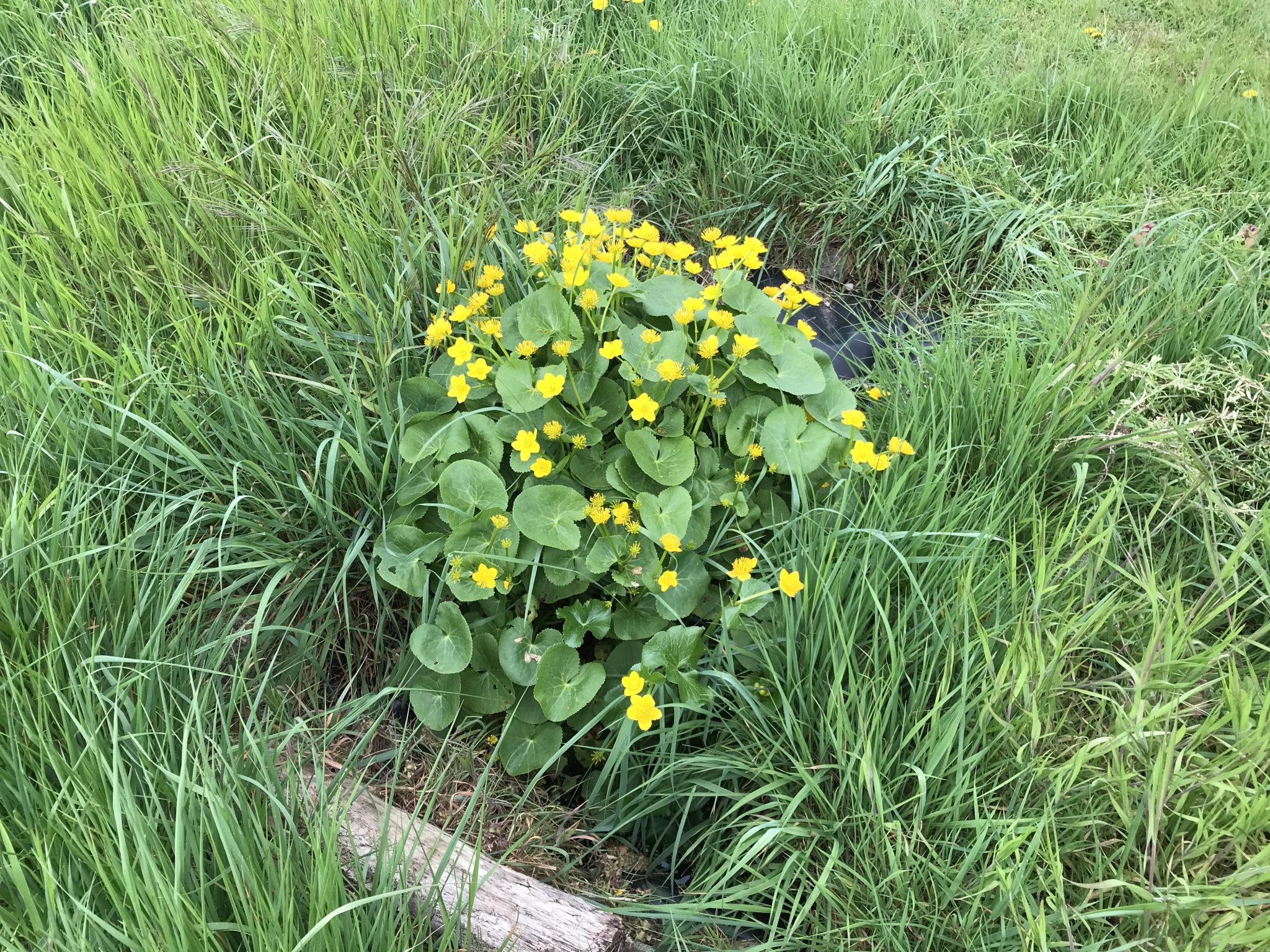 Caltha palustris grows very happily in the wildlife pond in my mini meadow. The pond is home to frogs and the C. palustris shades them. In return I hope they eat a few slugs. 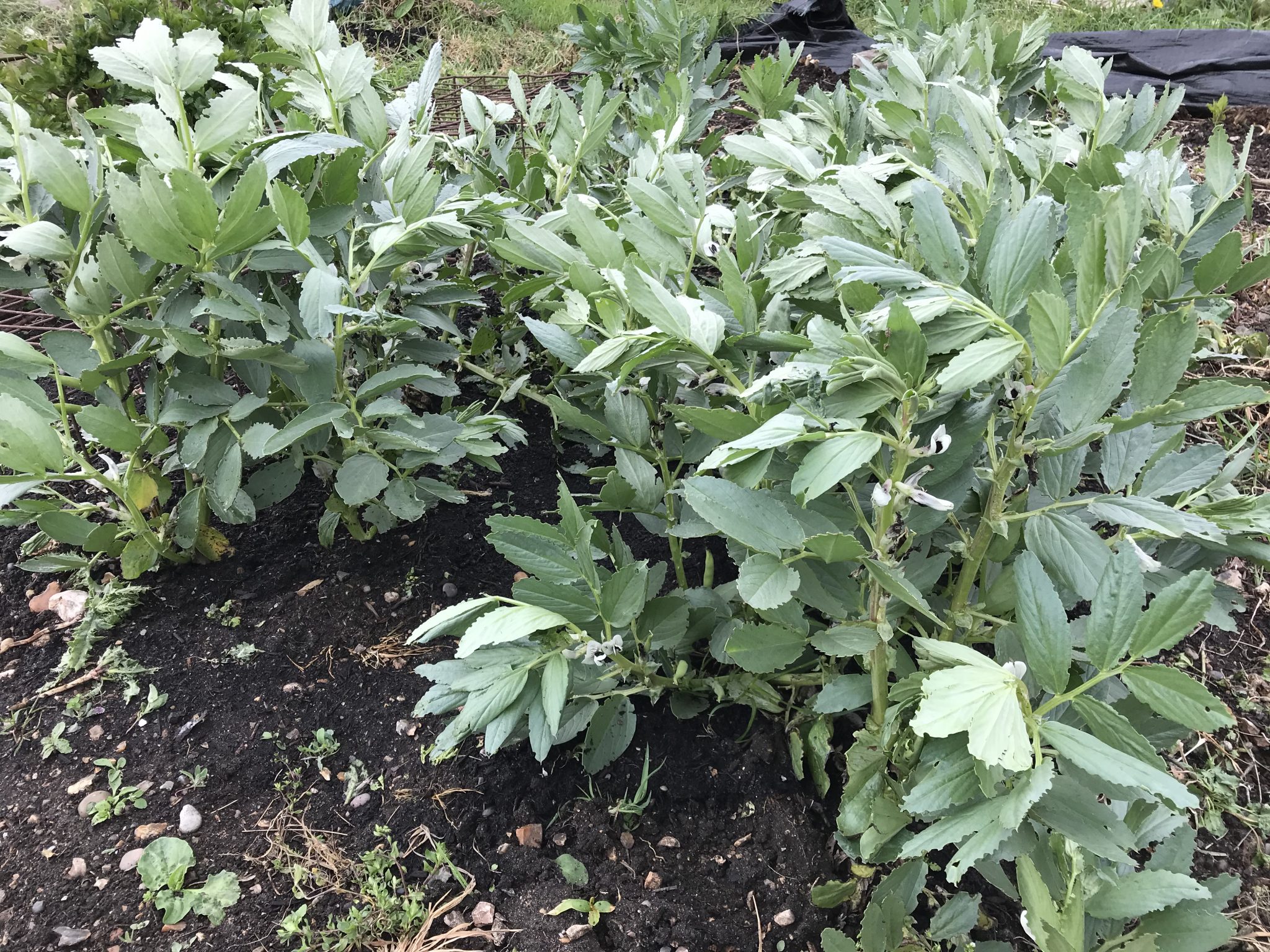 I sowed ‘Oscar’ broadbeans to over winter and they’re very short compared to my usual ‘Aquadulce Claudia’ but I shall reserve judgment until the crops come. Interestingly they’ve so far avoided blackfly, which is a small miracle.

New herbs on their way 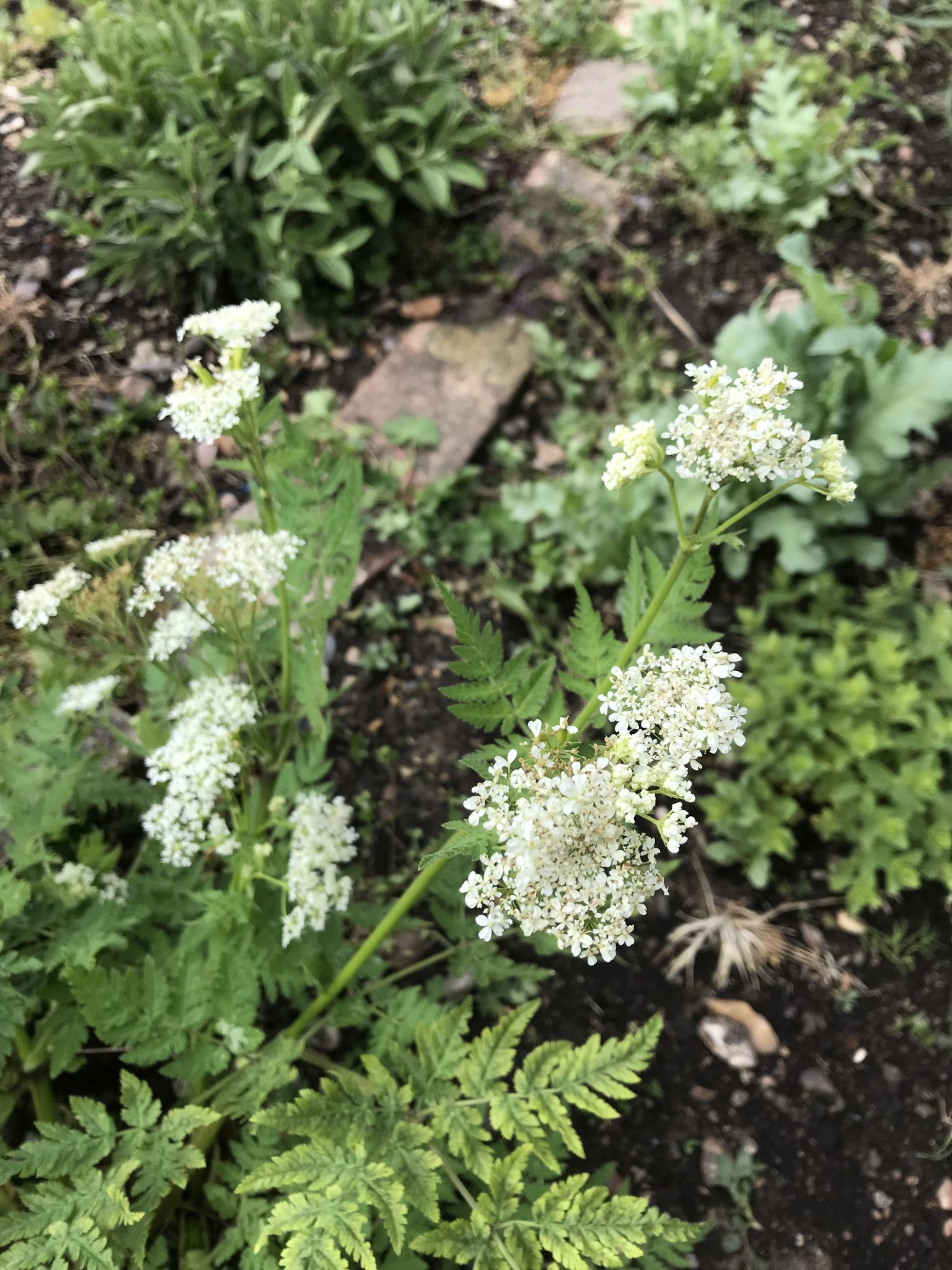 My little herb bed is doing well with the sweet sicily given to me by my friend Ginny flowering well. This is a great plant for a natural sweetener. All of my existing herbs, mostly grown from seed, are doing well but to speed the process along I’ve bought a number of new plants to bolster the range of herbs I have. At home I’m growing a few different basils from seed too.

Chilling out with the chillis 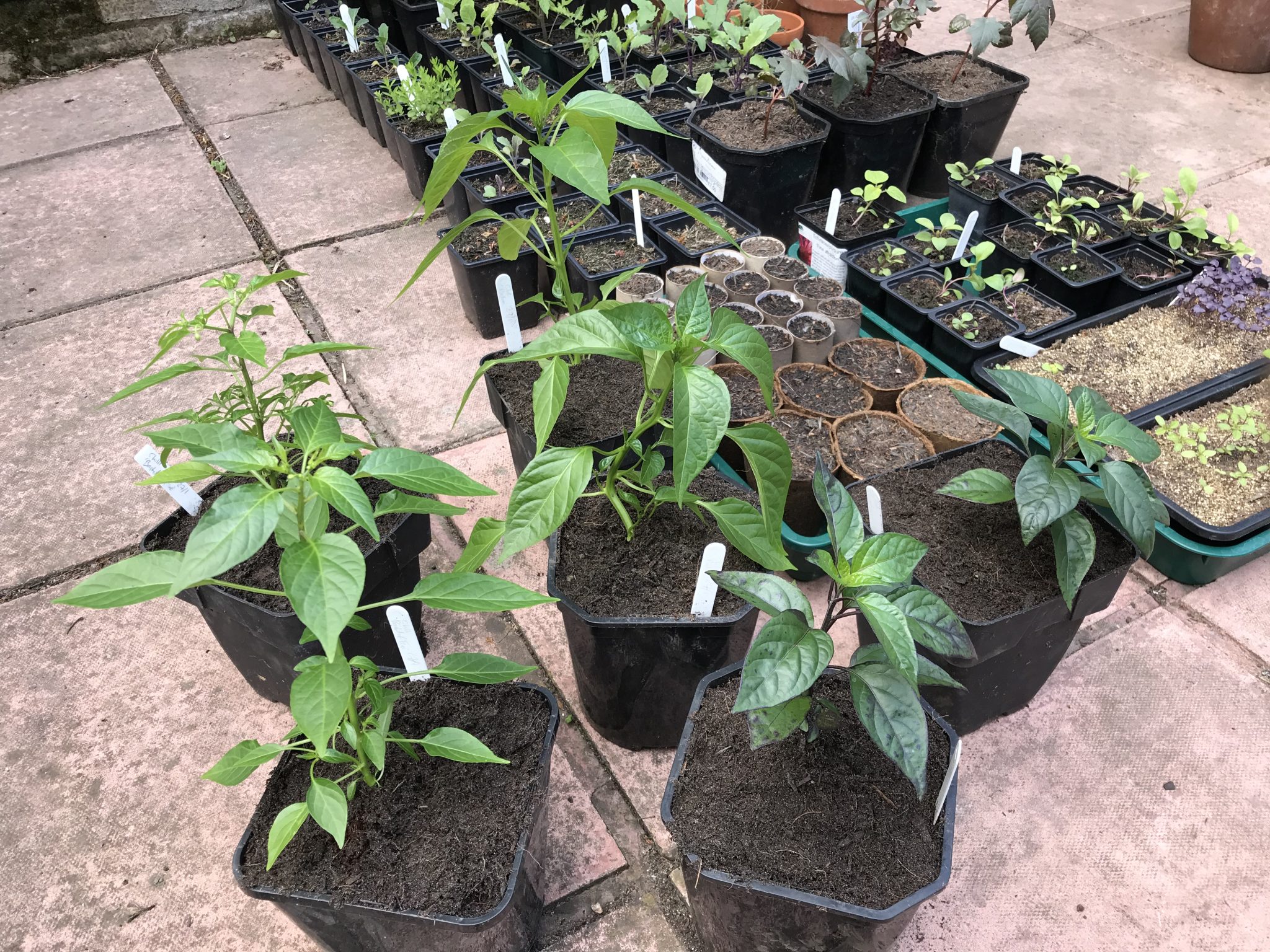 I’m growing a whole bunch of vegetables at home to take down the allotment soon but wanted to share how my chillies look! I’ve never grown so many before and I’m excited about how healthy they are. Chillis are very easy to grow it seems, so I recommend them to everyone. Though it’s a bit late to grow from seed now (January is the time to sow chillies really) so best to buy plugs now. Two of these plants will stay in our garden and the other four will be off to the allotment once I’ve hardened them off.

I hope you’re all having a lovely spring so far too – keep watering if dry as there’s a real lack of rain and fertilising to keep up with the fast growing plants. 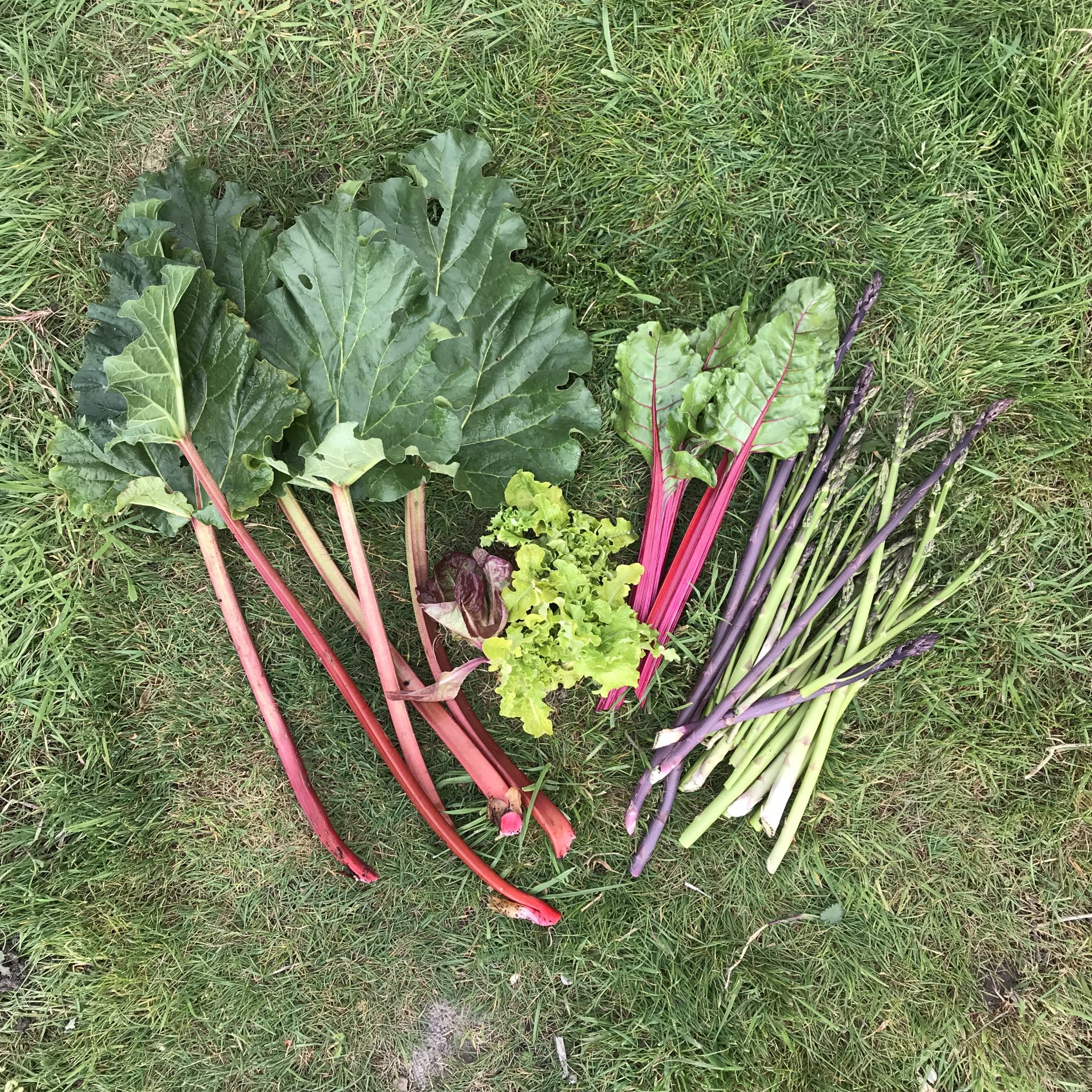