Driven by a renewed love of plants and a brain being filled with RHS knowledge, in 2014 I designed a mico-Victorian themed garden. Allowing me to stuff our plot to the rafters (branches?) with a living collection of varied and beautiful things. But we needed help, which is where Monty Don and Big Dreams, Small Spaces stepped in.

Our flat is late Victorian, I’ve been inspired by some beautiful Victorian gardens and the Victorian’s love of plants seems to match my own. Plus, the way Victorians seemed to layout their plant collections into different areas, meant I could practice growing all kinds of different things.

Height of the industrial Victorian era

We went on staycation in 2014, a driving tour of the UK, visiting places like Yorkshire (to see the Tour de France in Reeth where my family live), Northumberland, Scotland, and back down through Cumbria. Making the most of our new National Trust membership on the way.

One of our first stops was Cragside in Northumberland, an estate transformed by wealthy industrialist Lord Armstrong and his family. This was their playground, where they planted thousands of trees, a rockery, beautiful borders, partiers, woodland groves and built glasshouses. 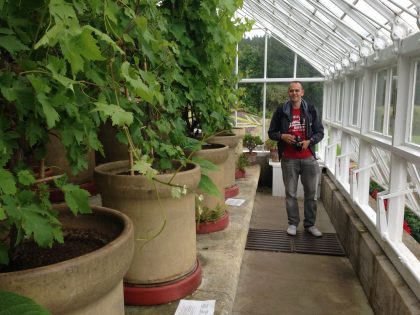 The result is a location of exceptional beauty – made possible only through the latest technology of the time. Armstrong created hydroelectric power to bring electricity to the house for the first time, and sculpted the land to move entire lakes. Using their extreme wealth, it was a Disneyland of the latest gadgets and horticulture creating a dreamworld that stands the test of time today.

To my mind, Cragside is wonderful for many reasons, the main reason being its manmade Pinetum and other woodland areas that make it so magical. While it does have a fernery, it was the ferns lining the gullies and woodland floor that caught my eye. They were everywhere. Mystical. And in combination with tall foxgloves, it’s easy to imagine Victorians walking through, telling tales of fairies and pixies that live in such places.

Stepping out of time and space

I’d recently watched the BBC programme Great British Gardens in Time, and was desperate to visit Biddulph Grange. As soon as we set foot onto Biddulph, the feeling was back from Cragside – of being transported somewhere else. That everything outside of this place did not matter.

As you walk around Biddulph, you go into many different zones. You visit China, Egypt, a pinetum, Italy, a Scottish glen, a fern filled stumpery and more. At the heart is the Dahlia walk.

As I walked around, it felt like I was in the middle of a magical story world, full of imagination and wonder. It transports you to other worlds and all looks beautiful, yet is filled with a huge variety of plants with different needs. 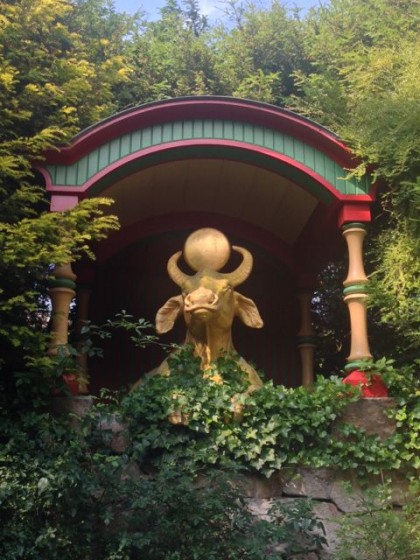 I wanted to create my own version of Biddulph, no, needed to. I think it must have been Biddulph Grange that cemented the idea of creating different areas in our own little garden. Lacking the space, it meant reducing the scale right down of course. But we still have space for multiple different zones. Like the Victorians, the latest technology would play its part as well.

In 2015, we were lucky enough to be on Big Dreams, Small Spaces. And for inspiration, Monty sent us to spend a day with Nick Bailey, the head gardener at the Chelsea Physic Garden. A botanical garden steeped in Victorian history.

Here we learnt more about the Wardian Case, Pelargoniums and of course, ferns, which I absolutely love.

It was a fantastic day – not least because of the blazing sun – and it really showed me how it is possible to make collections of plants work in an attractive and colourful way. I also loved the educational aspects of this garden, with information on the family, genus and species of the plants, plus their medicinal and culinary uses. It added depth to the planting not really seen elsewhere.

Soon after this, Chris and I went on holiday again for a few days and visited lots of gardens. I’d already planned to have a separate white garden at the front of the house in the sunniest area, but I had never been to the most famous white garden of all. So we went to Sissinghurst.

We’ve since been to various other Victorian gardens and plant establishments, all fuelling the interest to learn about this fascinating period and my own adventures in horticulture and botany. We have a long way to go with our garden, but we made a good start this summer.

If you ever read about the late Victorians, it’s interesting how advanced their understanding of scientific world was. Especially botany. They were so obsessed with the weirdities of nature it became one of the great fashions of the time. Helped by the industrial revolution and the discoveries of new technology and gadgets.

Both men and women, particularly in the middle and upper classes, were involved. Funding global plant hunters and directly collecting themselves to expand their collections, exhibiting plants indoors, in windows – some fitted with a mini greenhouse type thing called a Wardian Case – and on expansive estates, some with newly invented glasshouses.

The Victorian obsession with nature is endlessly fascinating and somewhat futuristic despite being set in the past. This era of adventure, excitement and wealth funding the expanse of human knowledge all came crashing to a halt with the first and second world wars.

Many people love plants and wildlife, but we’ve never come close to the excitement the Victorians felt at the wondrous diversity of life on earth. That intense race to discover the newest species, or the weirdest looking specimen.

While reading about Victorian plant collecting (in a second hand book about Biddulph Grange no less), I discovered one of our near Clapham neighbours, separated only by time, was Victorian doctor and botanist, Nathanial Bagshaw Ward.

He wasn’t the biggest player in the great Victorian plant collection race, but he did love plants and he did help promote the use of a key tool, the Wardian Case, speeding up worldwide plant collecting. Ward filled his London garden with thousands of species of plants, proving it was possible.

As you may have guessed, by this point I had become obsessed with gardening. For some time I had increasingly begun to feel like I had no purpose in life, but then we bought our flat in Clapham and began to plant things in the back garden.

And that was that.

It was like magic. The hobby of my childhood, which I had neglected for so long, was the very thing I had been looking for: gardening, nature… life!

With stories of Victorian plant hunters whirring in my head, I soon wanted to speed my knowledge along super fast, and had started an RHS Level 2 course in horticulture with the Royal Botanic Garden Edinburgh. Where I even came face to face with a sample collected by Darwin. At the beginning of this journey, within months I’d gone from planting our first bulbs to attending the Chelsea Flower Show for the first time. 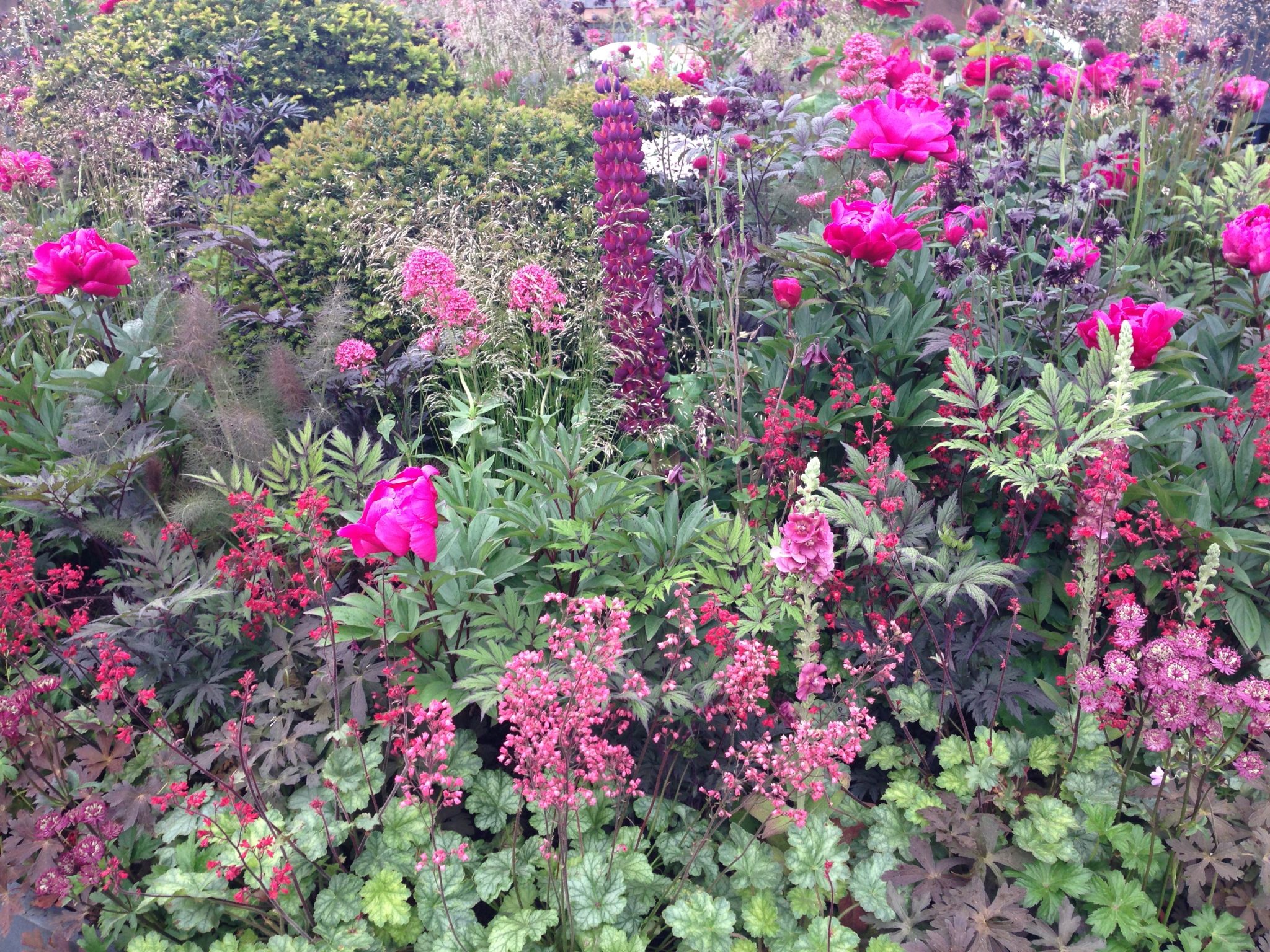 The Chelsea Flower Show was started by the Victorians to celebrate plants and garden design. On my first visit, my mind was blown. Seeing all of the plants was literally euphoric.

Two plantings (the pink one above and the white one below) at the 2014 show have stayed with me and influenced our garden ever since. My aim is to get the same impact of colour with a white garden in spring and futuristic, quirky Victorian neon technicolour in summer.

As the plan for our garden began to form, I was also deeply inspired, funnily enough, by Monty Don’s own Jewel Garden I’d seen on Gardener’s World. As I was learning, this show had become essential weekly viewing and I liked Monty’s use of bold colour against darker foliage.

And as weird as this sounds, the final layer of influence was the imaginary jungles of Pandora from the sci-fi film Avatar! I know, I’m bonkers. I love the way that film’s jungles are otherworldly in leaf shape and colour, dark with colourful highlights – having visited Kew and the Chelsea Physic Garden, I know these plants actually exist down here on earth!

Back to the Victorian future

The main influence all the way through this hurricane of gardening ideas remained Victorian gardening. In particular, the idea of different zones, exactly like Biddulph Grange. I knew from the RHS course and various TV shows and things I’d been watching, that with planning, we too could cram in lots of different areas, even with a tiny plot. Which is why we have a fernery, micro pond, mixed border and micro white garden. All a modern take on what a Victorian botanist would do.

I don’t know if our garden will always be Victorian themed, but it will certainly always have the essence of Victorian plant hysteria while I live here! The Victorian spirit was one of the latest fashions, of cutting edge technology and of the latest plants on display for guests to see. So as our garden evolves, I believe the spirit of the Victorians who pushed our knowledge of natural history forward so much will live on and I hope to share my love of plants with all who will listen 🙂