Jardin Majorelle is best known today for being owned by Yves Saint Lauren, who famously saved it in the 1980s from both disrepair and developers building a hotel on the site. It was made however by a French artist called Jacques Majorelle who began creating this unique garden and house in the 1940s. 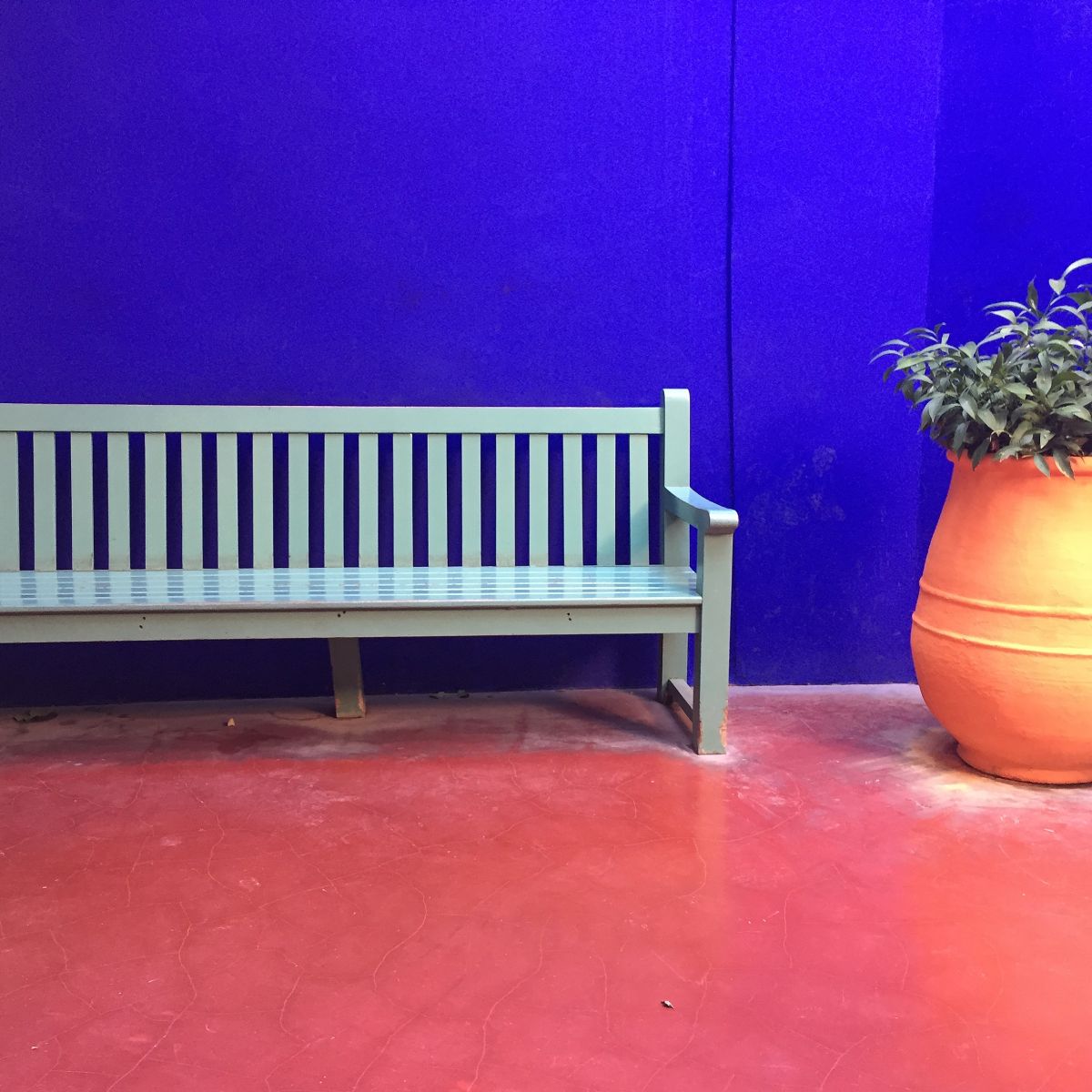 I’ve seen the garden described in style as part Moorish, part Islamic, Art Nouveau, Art Deco and Modernist. Having seen it in person I wouldn’t personally say it’s any one of those and can only really describe it as a combination of all the design styles Majorelle must have seen in his time. Then made completely unique by the bold, cobalt blue, yellow and red paint of the hard landscaping. 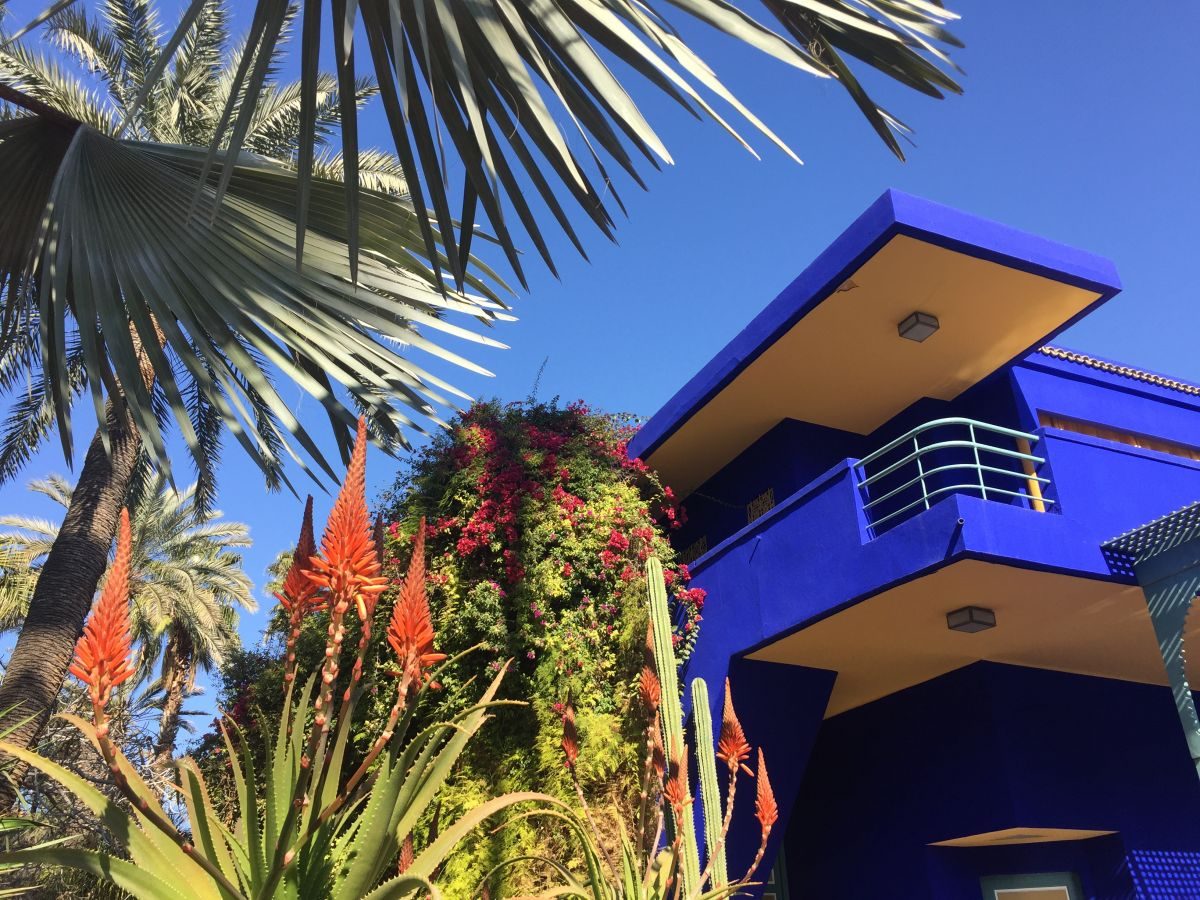 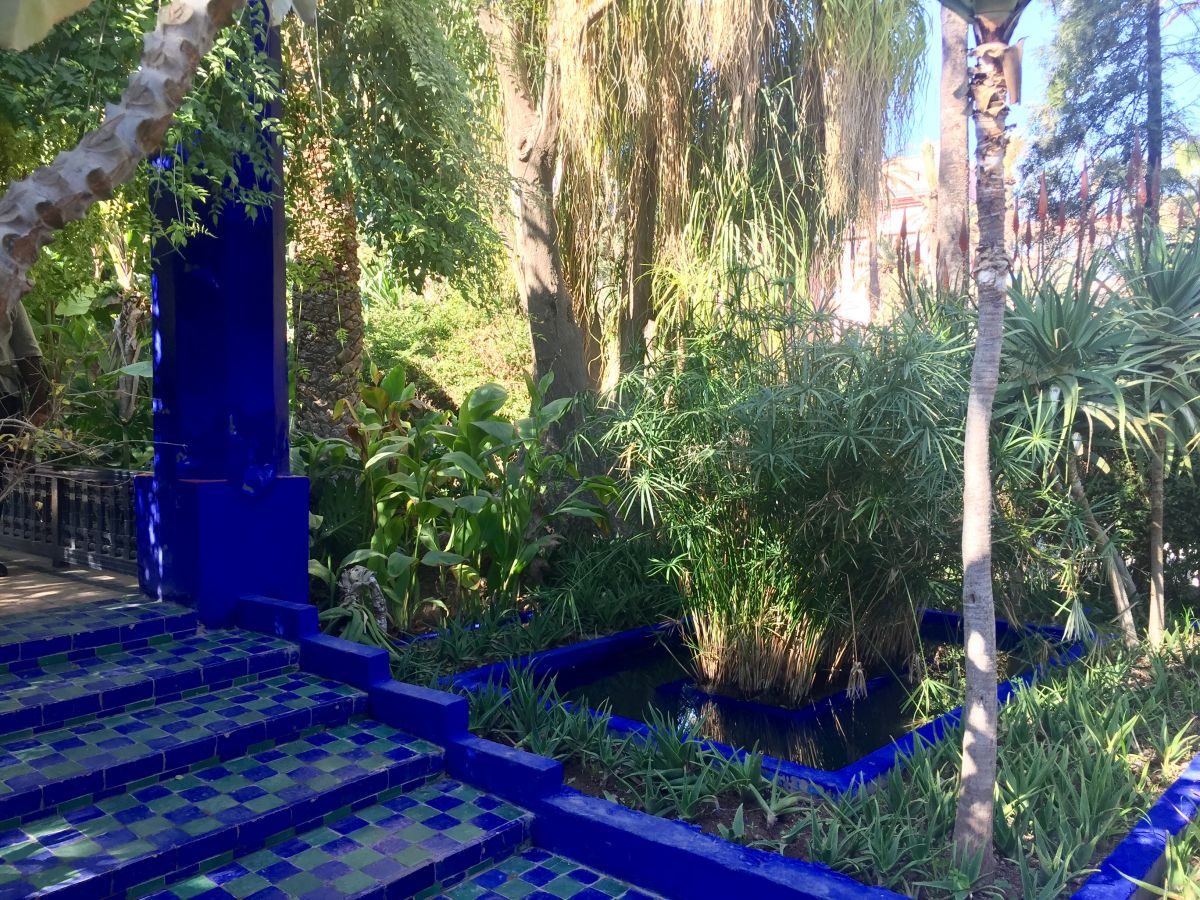 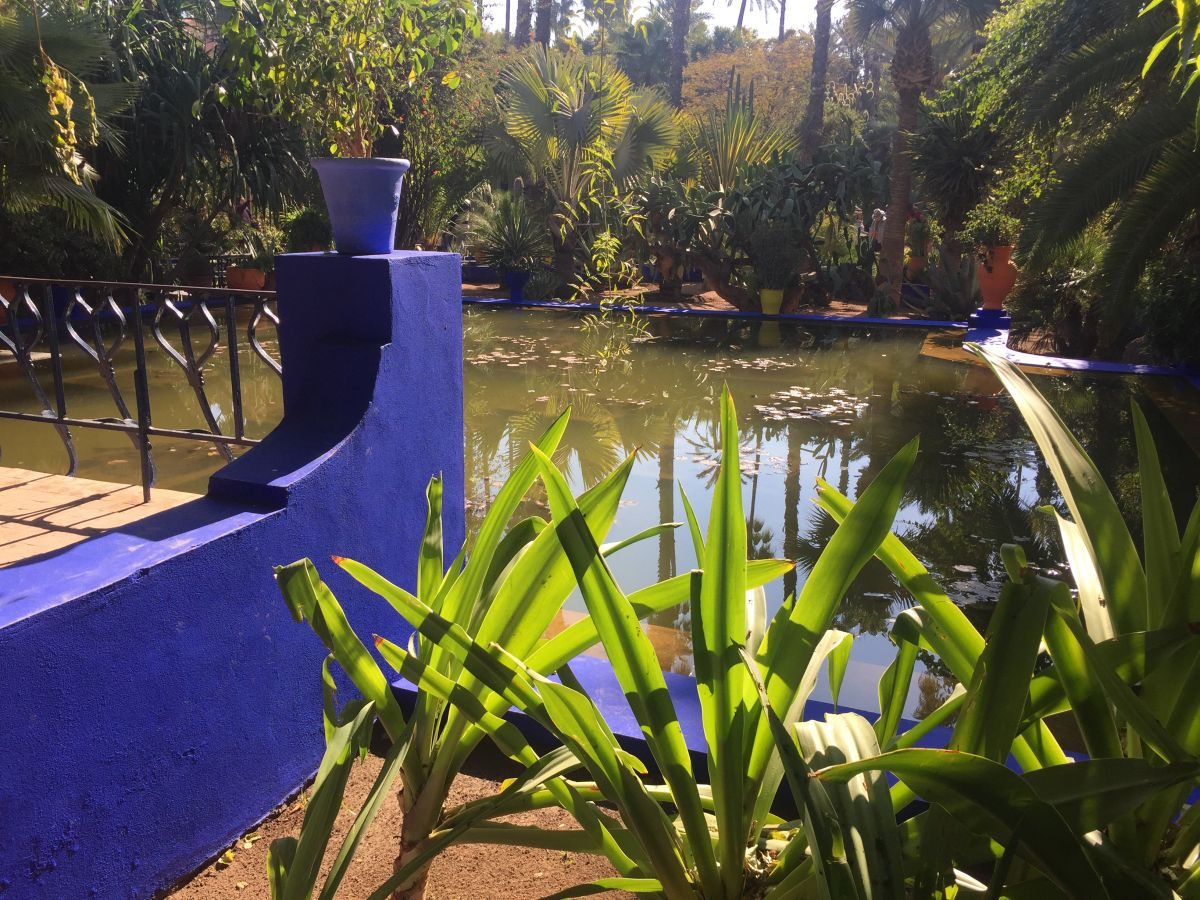 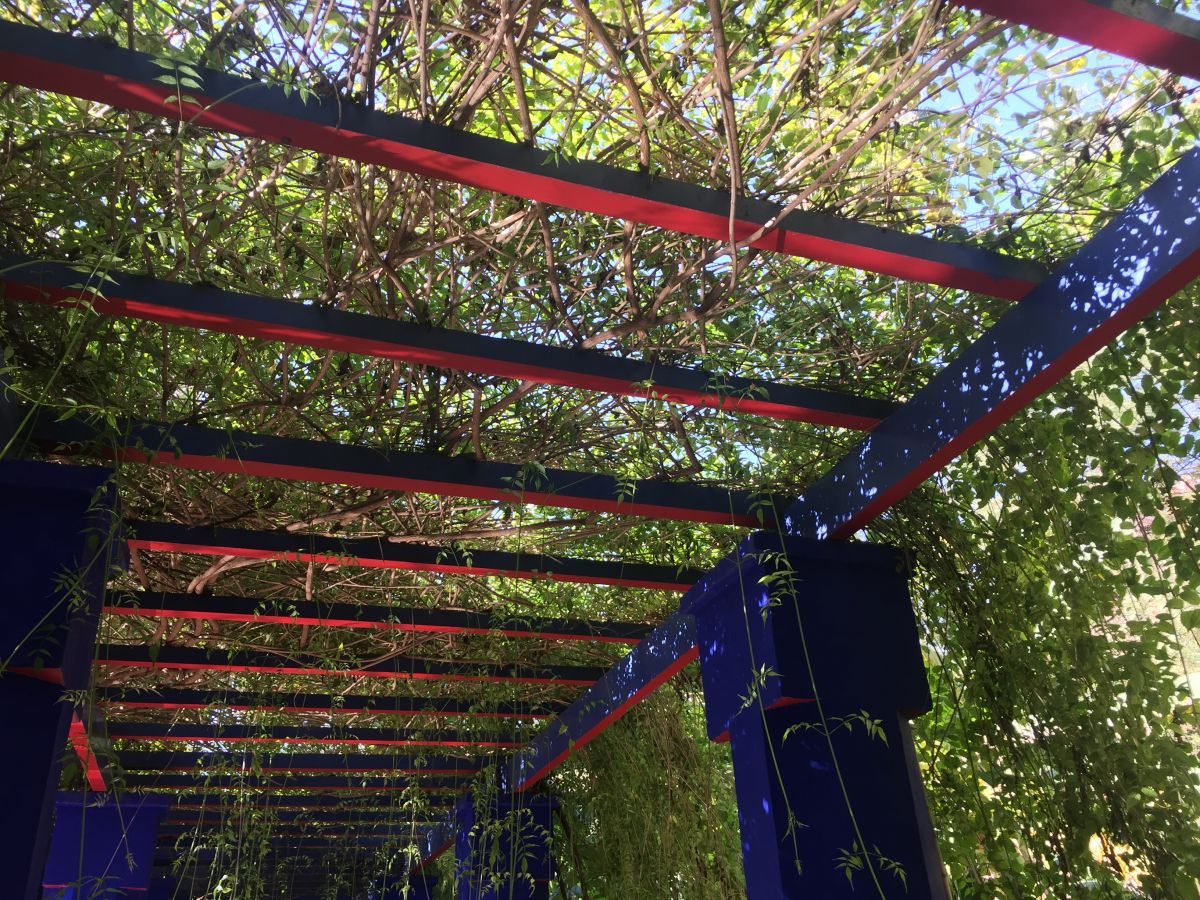 Jardin Majorelle is without doubt one of the most unusual gardens in the world and a privilege to have visited. The bold blue is the main event, it’s what places the garden as the no.1 attraction on every top ten list of tourist attractions in Marrakesh.

Yet it’s the whole picture that really makes the garden so special. The layout and spaces created by Majorelle are so private and peaceful. Then there are the plants. Your first taste of the unusual is the huge glaucous blue bamboo grove at the entrance. If cobalt blue is the primary colour of the building, glaucous blue is the primary colour of the plants. 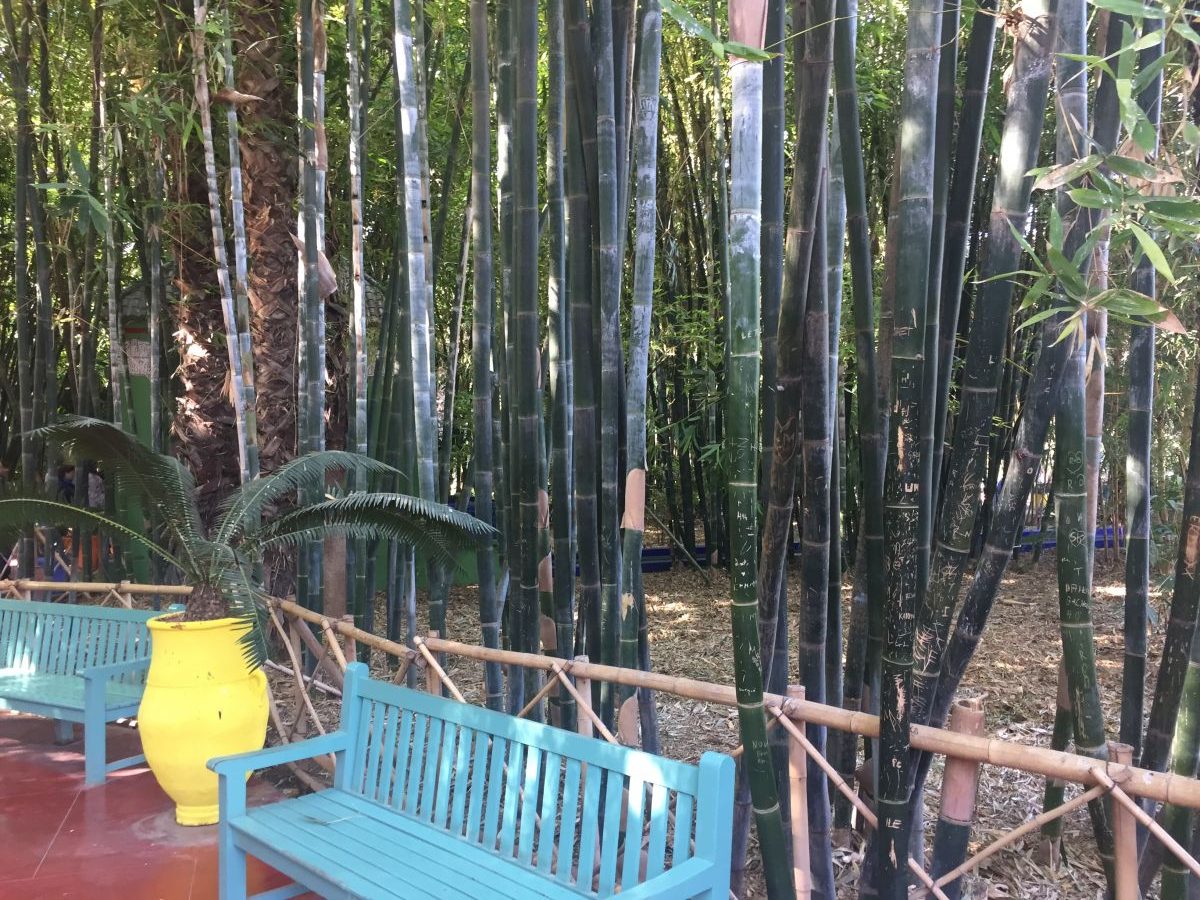 For me, it was the large cacti and succulent garden that was the icing on the cake. I’ve seen large cacti in the wild, spaced out widely, and the only places I’ve seen them grown closely in beds really have been in the glasshouses at Kew and RHS Wisley. To see an entire border of large cacti outdoors in the blazing sunshine was a whole new experience. 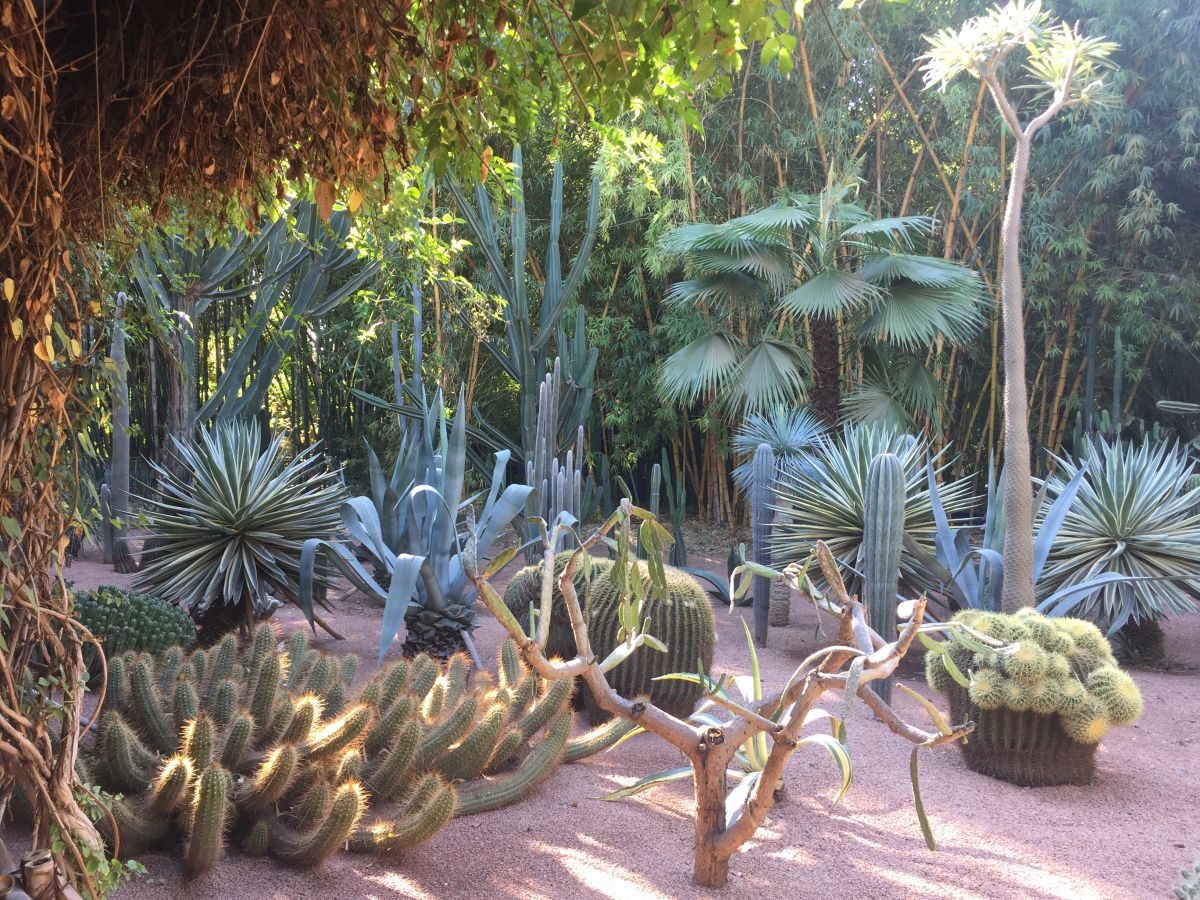 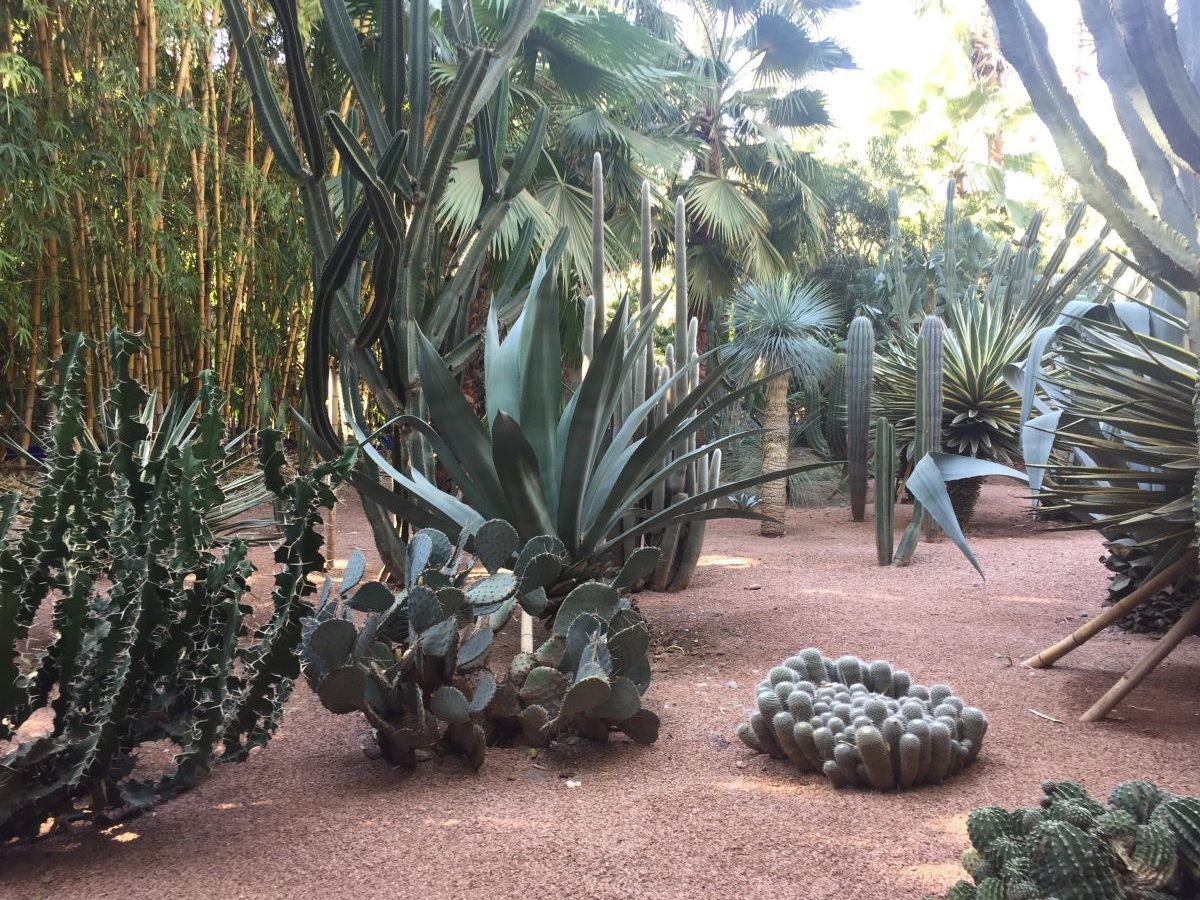 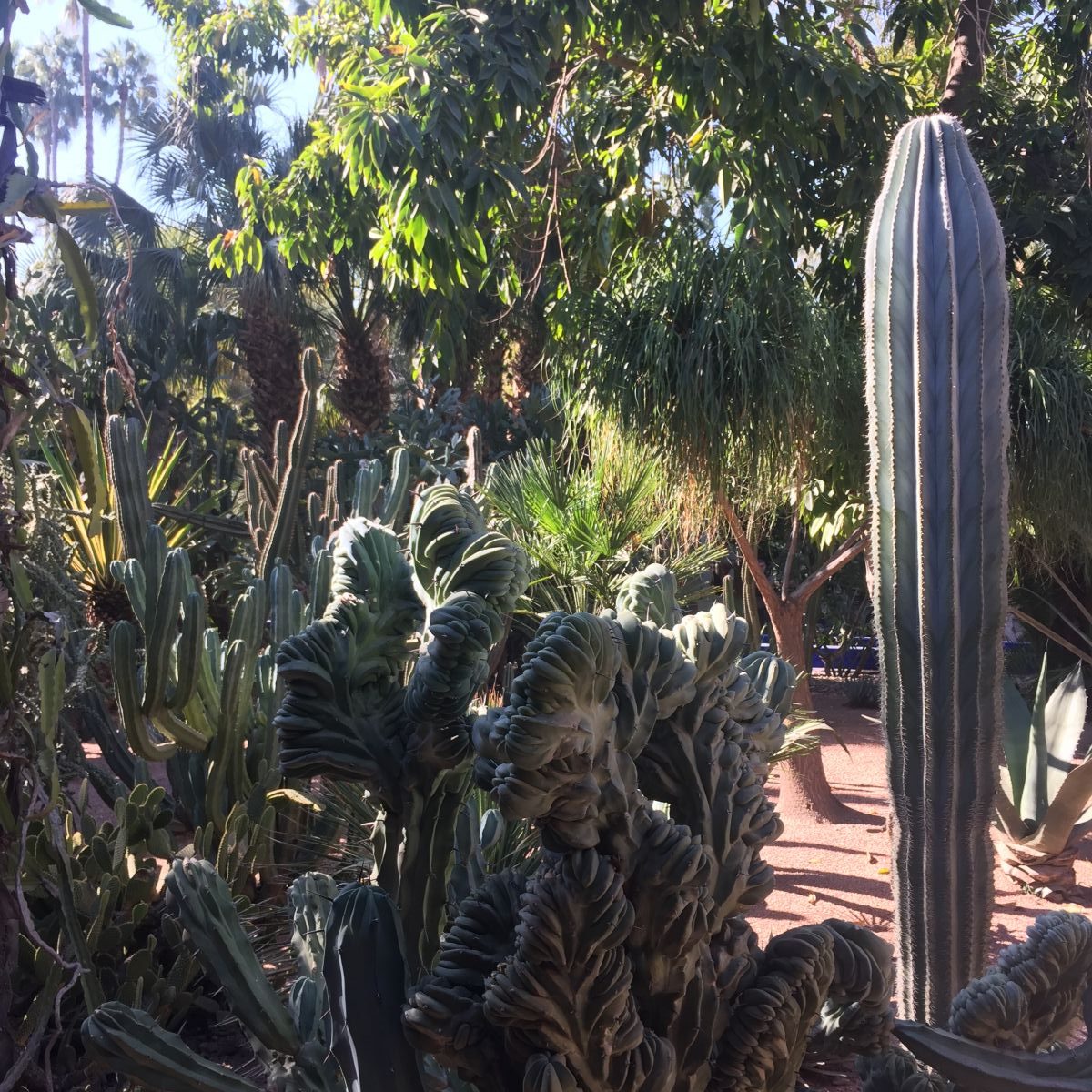 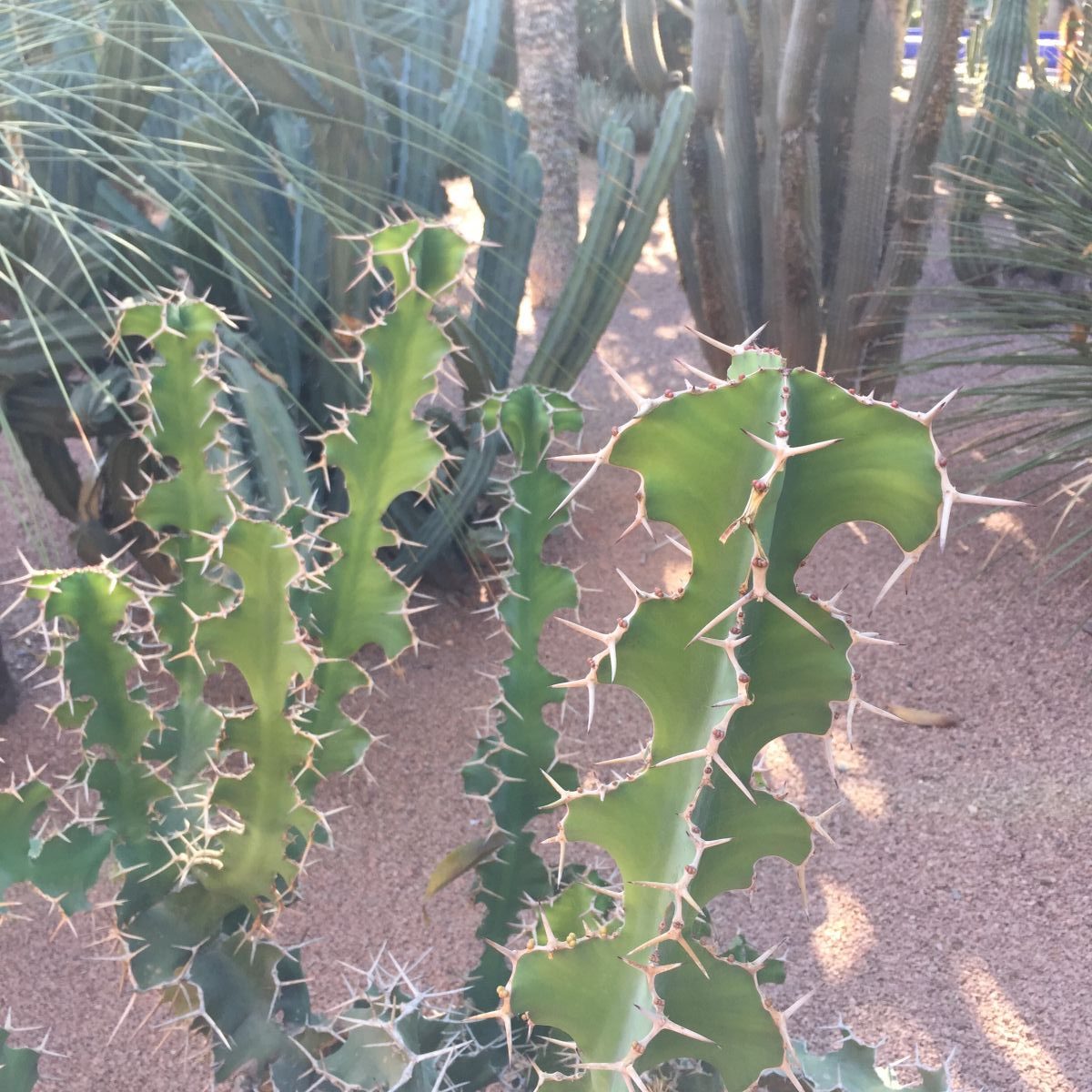 Three main paths run from the house in a small goosefoot pattern, cemented and painted red. The two outer paths are covered by pergolas creating shade and for climbers to grow over. 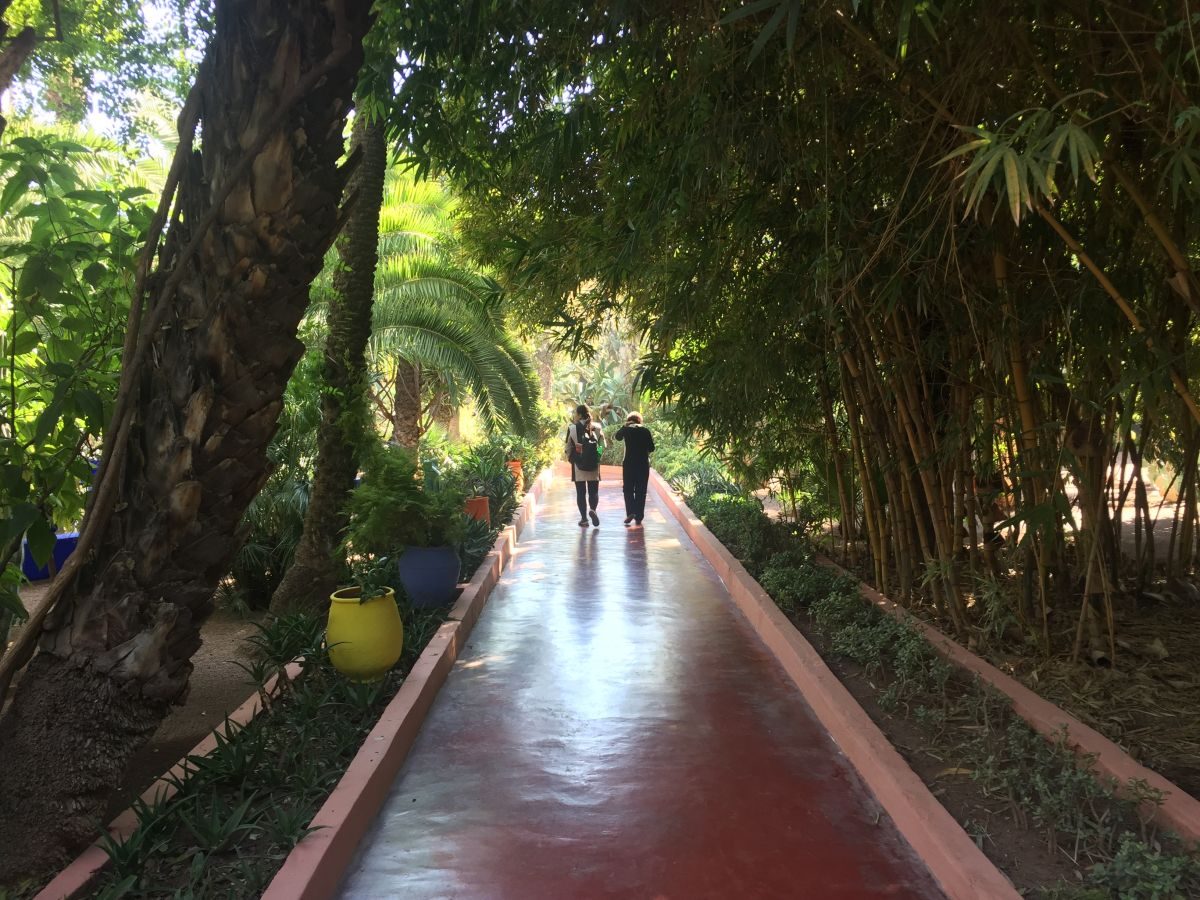 A large element of the garden are the pools of water, edges painted blue and containing fountains. These bring a sense of peace and tranquility, they also create open spaces in an otherwise overgrown garden. 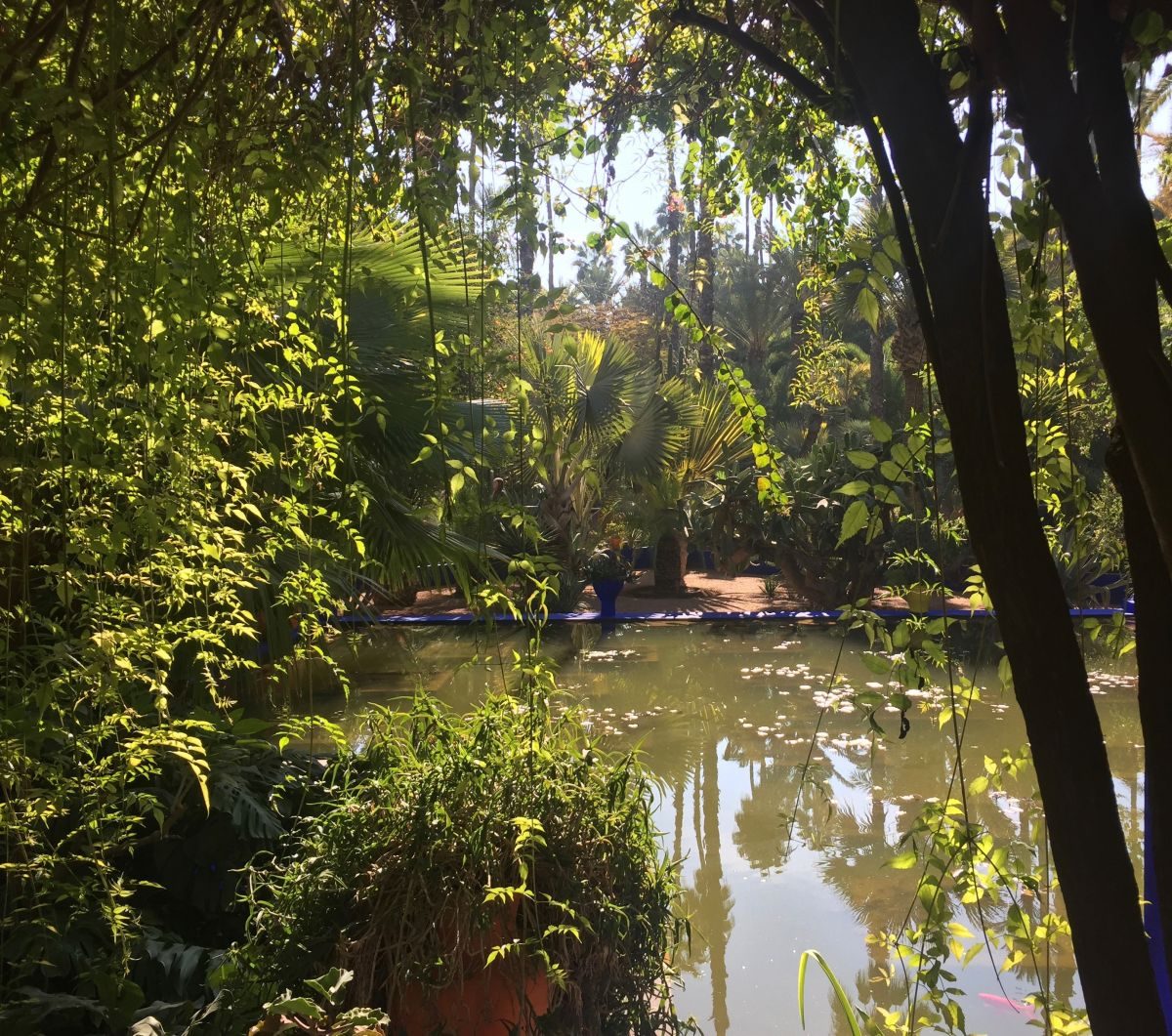 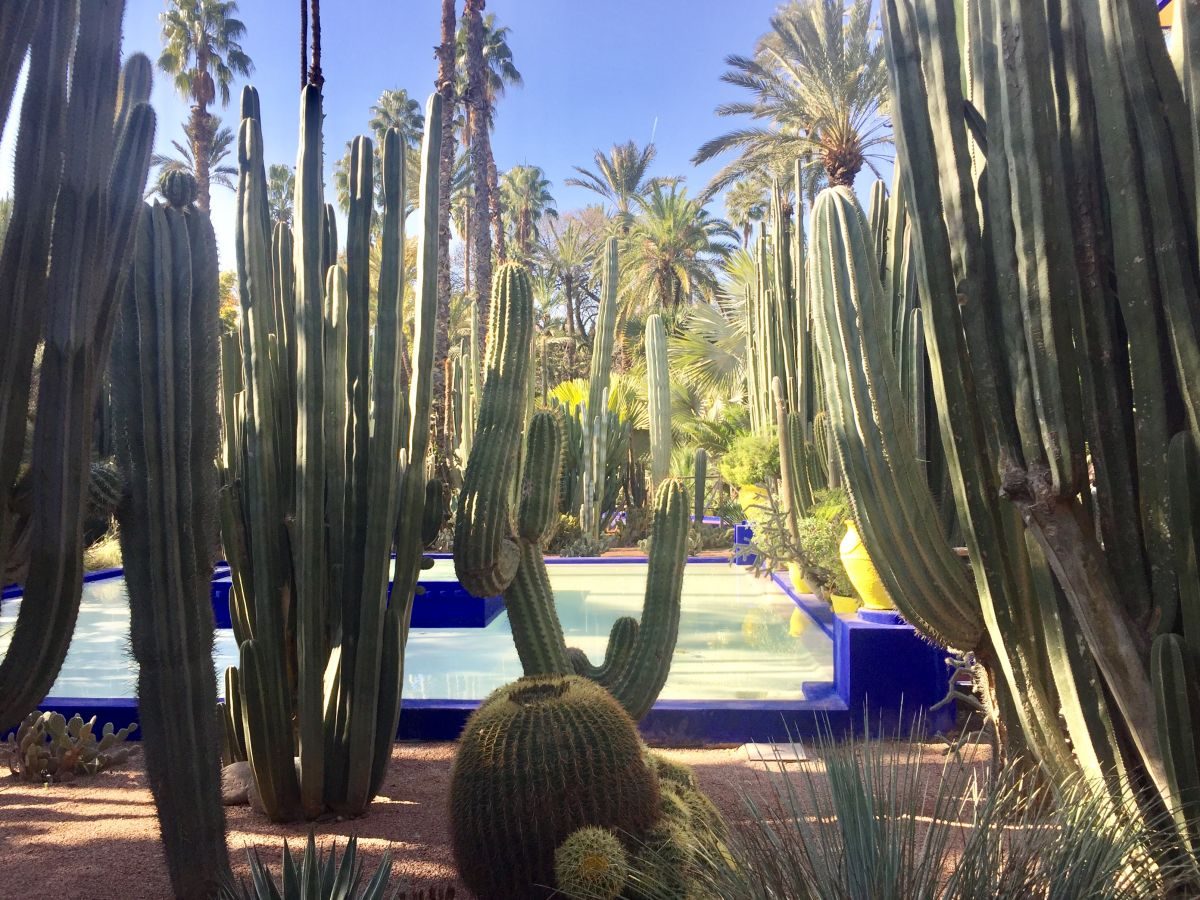 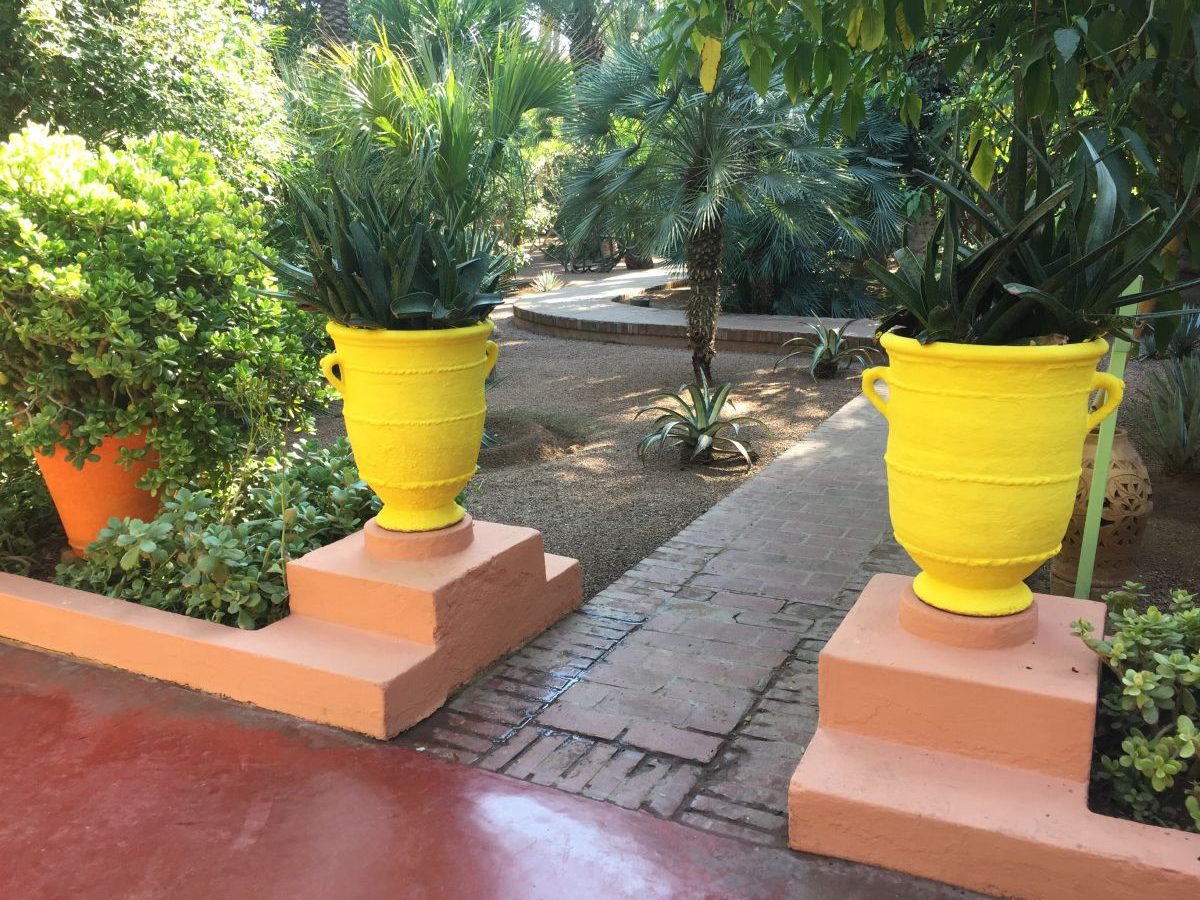 Many new plants have been added since Majorelle’s time, although as a plant collector, it must have been wondrous even then. Beyond the cacti are many tropical plants including many beautiful specimens such as a couple of huge elephants foot pony tail palms (Beaucarnia recurvata), Bismarckia and other palms. It’s a botanical treasure trove in the desert.

Jardin Majorelle will stay with me for a long time to come. It’s fairly perfect in its execution and a world away from UK gardens thanks to its hot climate plants and the artistry of the house.

When we were in the garden, it was incredibly busy. Its fame has certainly grown its crowds to epic proportions. It’s great so many people – mostly non-gardeners – are enjoying the space.

It did make me realise how gardens are really meant as a place to escape crowds and relax. As such, we really enjoyed the much quieter El Badi Palace and Palace Bahia on our visit to Marrakesh. Certainly I seem to enjoy gardens much more when they’re emptier because you can appreciate the views and atmosphere better.

Regardless, Jardin Majorelle is a must see – a one of kind garden designed by an incredibly talented artist and amateur botanist enjoying the life of an incredible city. His creation is a garden that pushed boundaries then, and pushes them still now. I always admire a garden that throws convention to the wind and Majorelle has done that here to perfection.