It’s been three years since we set up our garden. For the first time a large number of plants have multiplied so much they’ll have amazing impact this year and, of more interest to me, I can think about dividing, propagating and the impact that will have on our garden.

The thought of having surplus numbers of the plants I love is an exciting prospect. It’s put my brain into a whirl thinking how I can use these plants to change and add to the garden. Or in some cases feel happy to remove some.

Three tiddly Brunnera I bought all those years ago, arriving looking dead, have grown so much I could now divide the clumps into fifty or more plants. My prized Astrantia was slow off the mark but has a supersized crown now, finally ready to be split and spread.

It really is exciting seeing plants happy and growing strongly.

Cannas have grown so vigorously I must have at least fifty plants in the pots this year. Amazing these huge things came from the one tiny shoot in a seven centimetre pot.

Interestingly, Tulips are still popping up through the border even after I made an effort last year to remove them all. Turns out I may have found a very perennial tulip after all… almost as troublesome as the Spanish Bluebell I’ve been fighting for years.

Some of our ferns are gargantuan monsters with growing points bigger now than I’ve ever seen.

Not everything is hunky dory. A couple of our Hellebores have flowered badly with the buds opening underground. They’re the two in the most shade making me question how shade loving Hellebores actually are? The more unusual Sempervivums seem quite unhappy which is sad. I love Semps and wish they would spread and grow in our garden as much as the Cannas. Unfortunately it looks not meant to be. Another plant I struggle with is Echinacea.

On the plus side, indoors another succulent, Aeonium arboreum ‘Zwartkop‘, is propagating nicely and reader Yessen B says they can be quite hardy in London, which I’ll try next year, leaving some outside in winter. I’m planning on propagating lots of these now to go outside in summer as a new key feature.

Oh, word must go to Persicaria ‘Purple Fantasy’. Growing so strongly and quickly I’m surprised its roots haven’t cracked the pot they’re in. I’m glad it is in a pot and not in the border!

Our episode of Big Dreams, Small Spaces was repeated on the BBC again recently and not only was it a lovely reminder of an important year for us, but also a reminder for me of the spirit of the garden. Last year, although it looked pretty the look of the garden was a way off of the plan in my head. I don’t want it to be a typical tropical garden with big paddle shaped leaves, however I was reminded that it is a full on tropical garden. For some reason I’d been resisting accepting that.

Embracing it finally, I’m planning to reshape the planting a little to put more emphasis on the quirkier leaves. I’m going to experiment with the Aeoniums being used prominently for instance.  I hadn’t realised Helianthus salicifolius was perennial, assuming it was annual like traditional sun flowers. When I found its spreading shoots recently, I’ve been planning to make greater use of this – probably in the Belfast sink I normally use for Sweetpeas.

Speaking of Sweetpeas, I’m going to bring them forward in the borders this year to make sure we have an awesome display of them again – last year was good but not the best as they were shaded out. 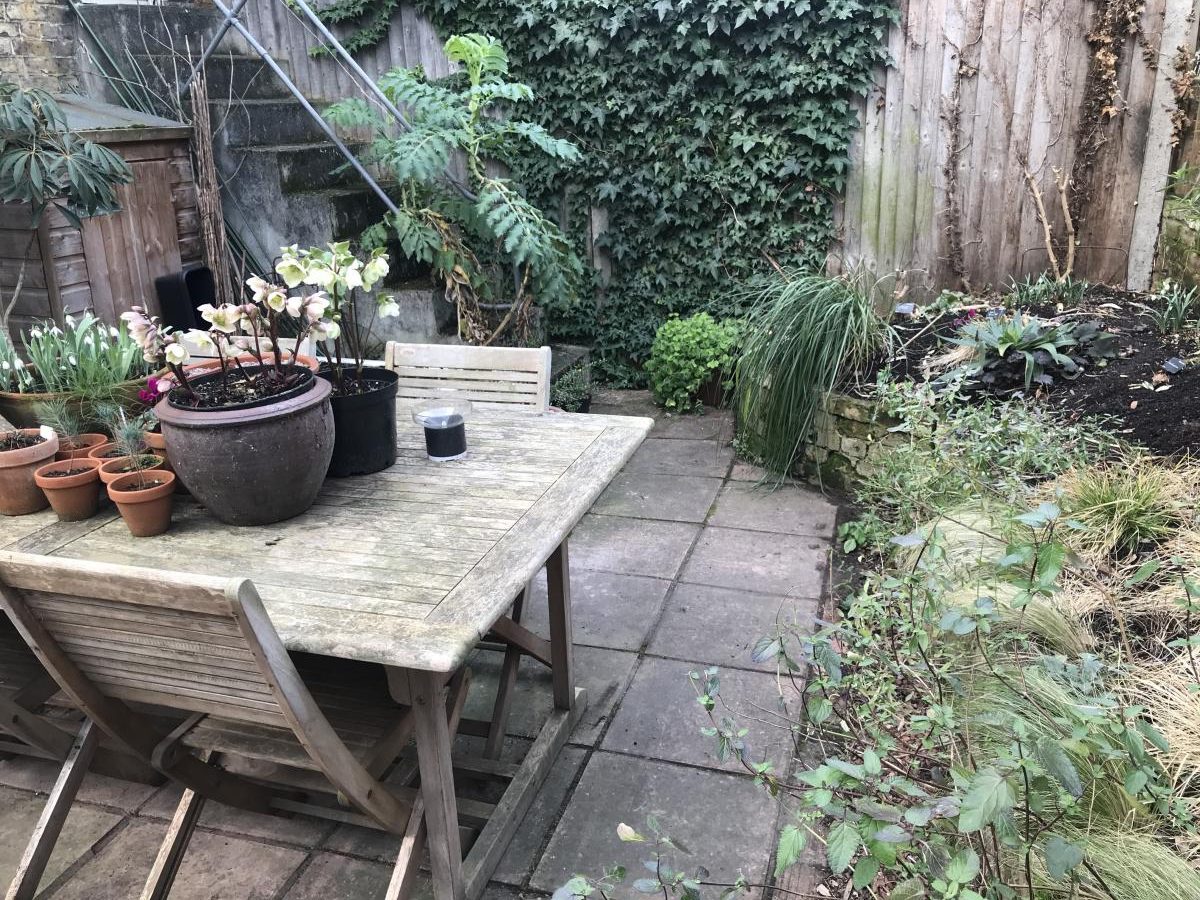 Our garden right now (above) looks bleak and you’ll be forgiven for thinking “where’s the garden gone?” February is a fantastic month though, I don’t know why people knock it. The turning point from January to February is the genuine start of the year as gardens are reduced to their barest bones. Giving us gardeners the chance to stand back, imagine the plants growing and to start planning to move things around. Best of all, with the garden like this you can see all of the plants now readying their buds at ground level. They’re set to explode as the weather warms, which for us is mid-March, only one month away. The change from the above picture to what it looks like at the end of March is incredible, and really, it’s what I live for.

One thought on “Pot’s growing on in February: Hellebores, Snowdrops and vigorous perennials forcing changes”