January is the time to get organised, wash pots carefully to kill nasties, enjoy browsing the many glossy seed and plant catalogues and plan what you will plant and where. Personally I also use this month to repot dormant houseplants.

This January I feel very chilled out about the coming growing season compared to this time last year. With some confidence from my mad year of learning in 2015. The excitement to get started is still there – but I know it’s better to wait for warm weather than begin too early.

Two of our five Hellebores have started flowering with the others on the way. Fair play to Ashwood Nurseries, well regarded for their own breeding programme of Hellebores. I’ve been on the hunt for the purest white Hellebores – because our garden is only white in winter and spring – and as you can see in the photo their Pure White Single is beautifully described.

I won an incredible prize Schefflera! 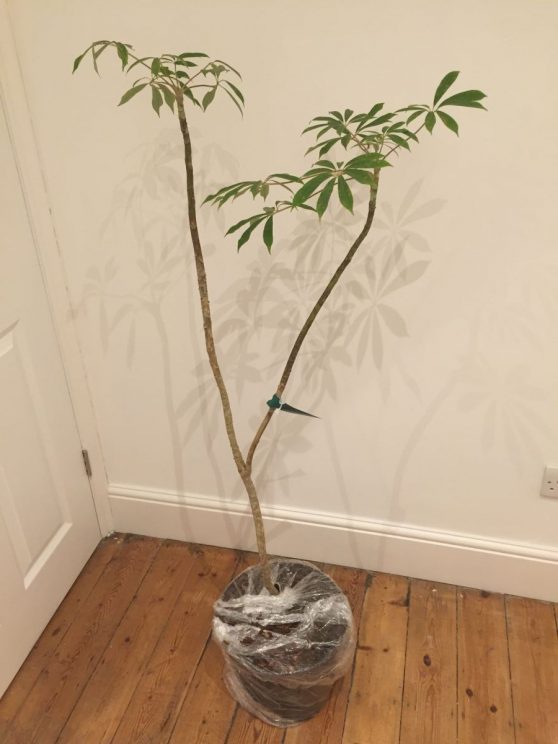 I entered a competition run by Michael Perry, Thomson & Morgan’s plant hunter, to win a Schefflera taiwania from the Chelsea award winning Crug Farm Nursery. And to my utter surprise, I won! As you can see above. Hashtag amazing!

Have to admit, I don’t normally enter competitions, but after seeing the competition photo, I read up on the plant in this Guardian article. Absolutely fascinating. Schefflera are part of the same family as ivies and Fatsia japonica, the Araliaceae. On reading this there was an “of course!” moment in my head because Fatsia and ivy flowers do look very similar. I LOVE botany! In addition, I noticed this very plant has sparked my quirky-eye before at the Royal Botanic Garden Edinburgh, you can see it in the fifth picture of this photo gallery. 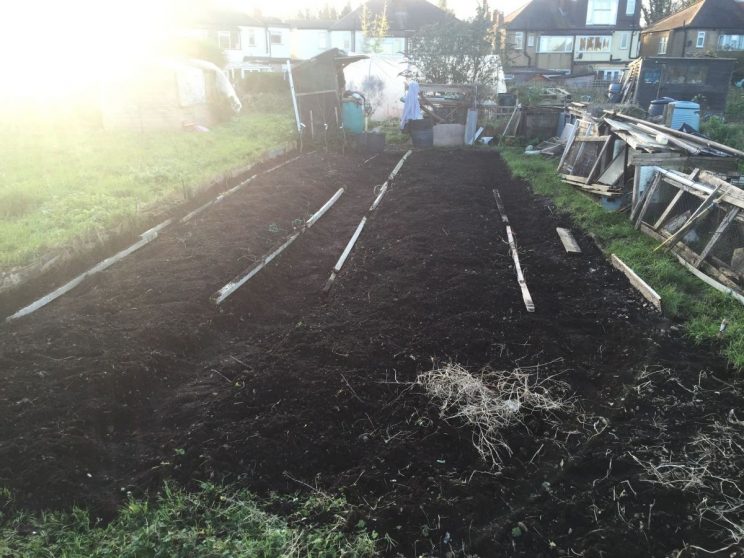 I’ve been blogging about my new allotment plans here. I’ve made the most of the clear weather days to weed, dig over, mulch with manure and also plant three step over bare root apple trees. I also pruned an existing grape vine. 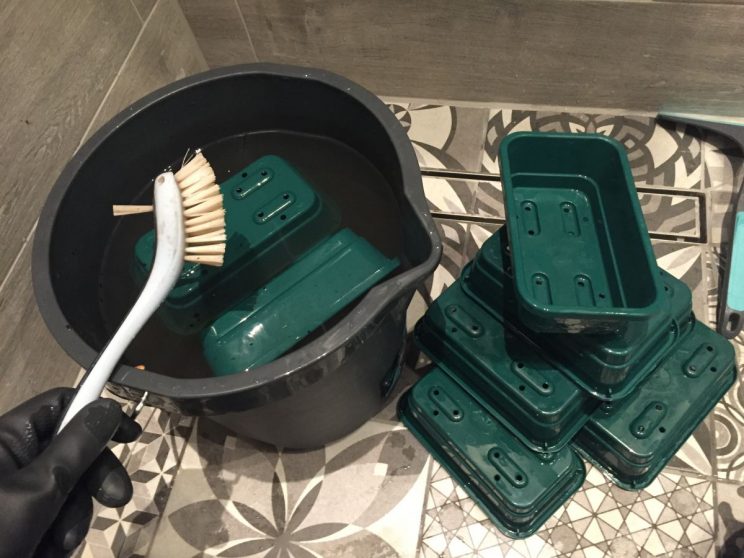 Last year I had trouble with damping off of seedlings, partly because I started too early (in February) but also because I wasn’t brilliant about sterilising the tools. Not this year! Oh no. This year I’ve been scrubbing all propagation materials using disinfectant. 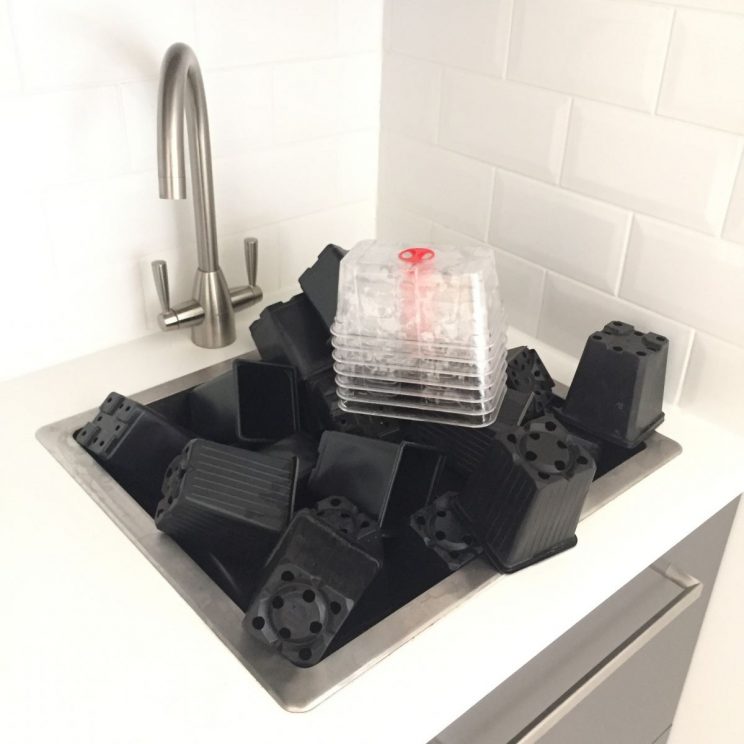 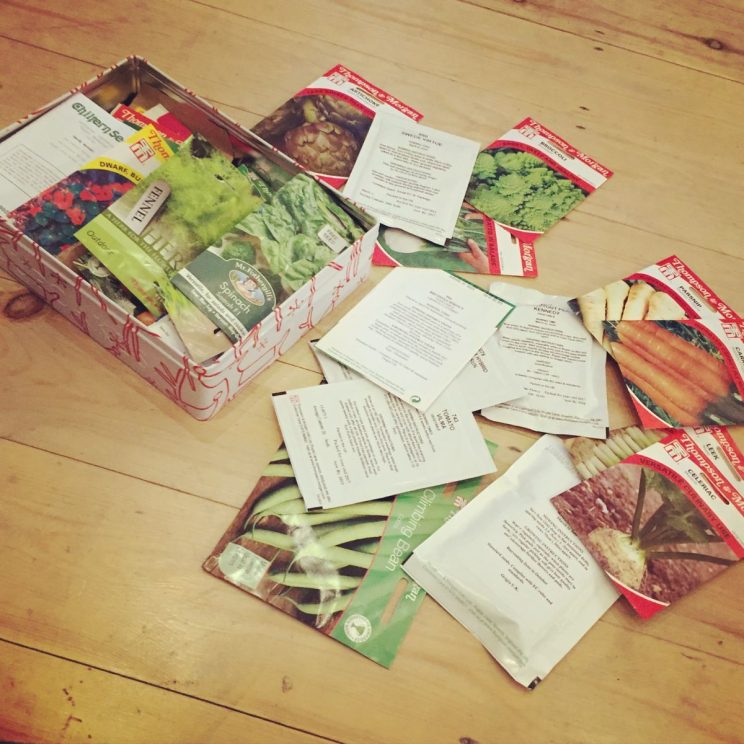 I have quite a few seeds from last year, and have bought tonnes of packets of flower and veg seeds for this year – mainly for the allotment. January is the perfect month for this job. Fail to plan, plan to fail has never been truer than for gardening. Plan your year well, and with good plant care it is hard to fail.

I didn’t sow my sweet pea seeds in autumn this year (bad Jack!) I did last year and they worked really well but seemed to run out of steam after mid summer. That might be normal for Sweet peas, however I have sown them now (mid January) to see if this delay helps improve or worsen performance.

I bought my sweet pea seeds from Chiltern Seeds this year because they had the varieties I wanted: ‘Beaujolais’ which I grew last year and was a fantastic colour, ‘Almost Black’ a deep rich purple and ‘Royal Wedding’ a pure white for the front garden. I soaked them over night and planted when swollen: 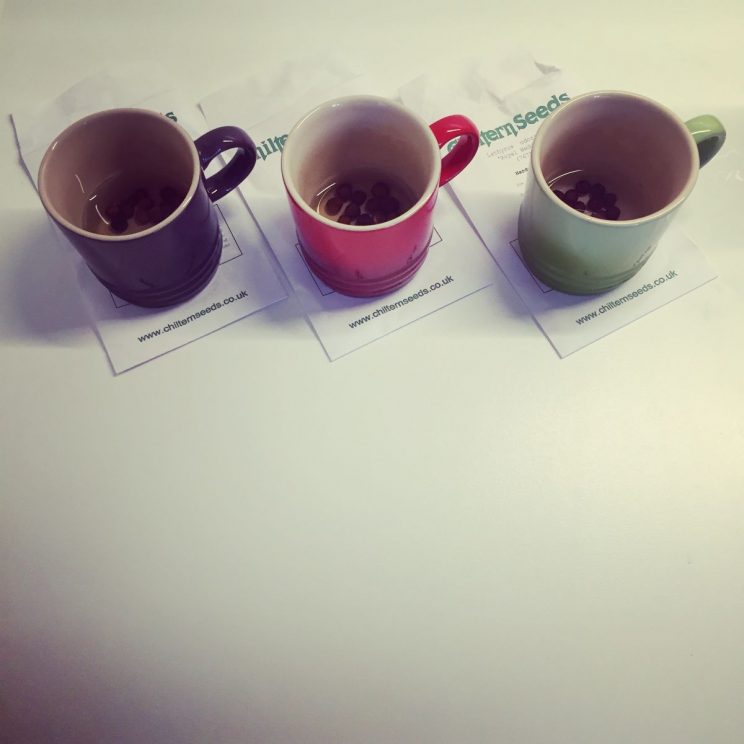 Every one of the 60 seeds germinated on our Garland Super 7 windowsill propagator. Good work Chiltern Seeds and Garland. They’re now out in a cold mini greenhouse until spring. 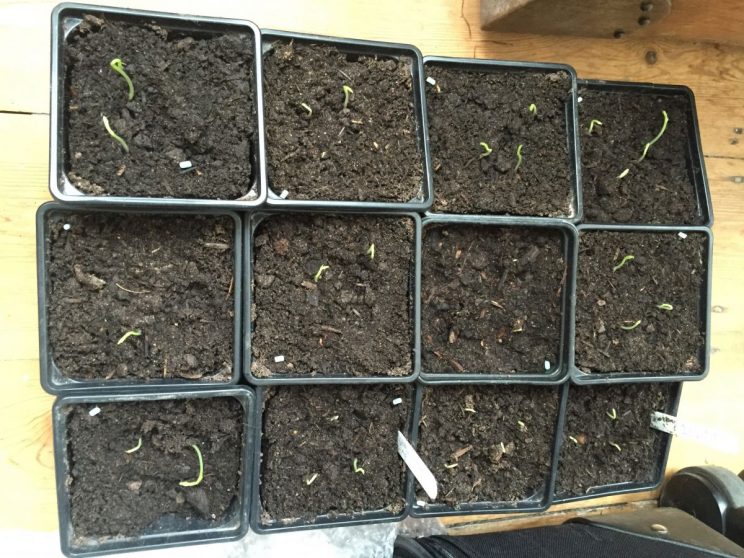 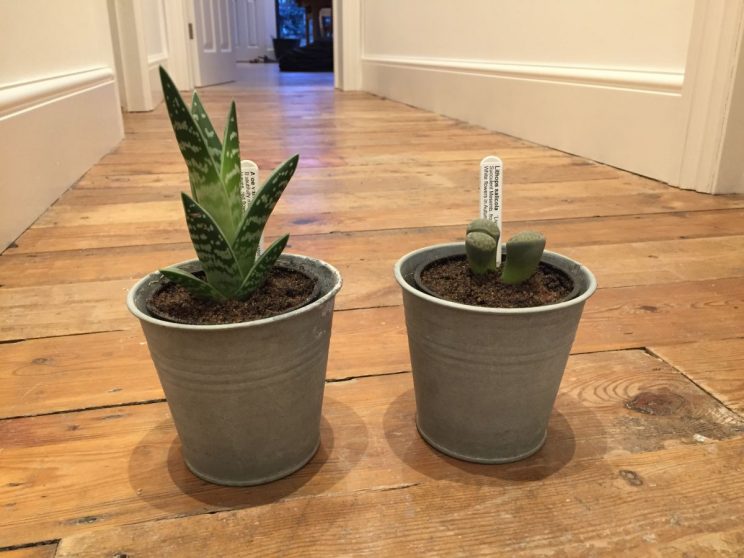 There appears to be some excitement on social media at the moment about indoor plants  – I think this actually happens every winter when us gardeners are forced inside rather than a new craze. I’ve always been an indoor plant gardener so I’m glad others are getting back on the band wagon.

We have quite a few different indoor plants, I’ve always loved succulents and cacti because they’re easy (though hard to flower) and look so odd. You can see above two small plants I bought at RHS Wisley last year from Craig’s House Cacti – Aloe variegata and Lithops salicola – both I grew before on a bigger scale as a child.

At University I actually still had my Aloe variegata – it was huge and eventually toppled off a windowsill and was destroyed 🙁 I think it’s a beautiful houseplant and recommend it to everyone.

Both of these I potted on to a larger size pot, as well as our Pilocereus (either glaucochrous or glaucescens I believe) cactus, given to me by my grandparents in 1999. 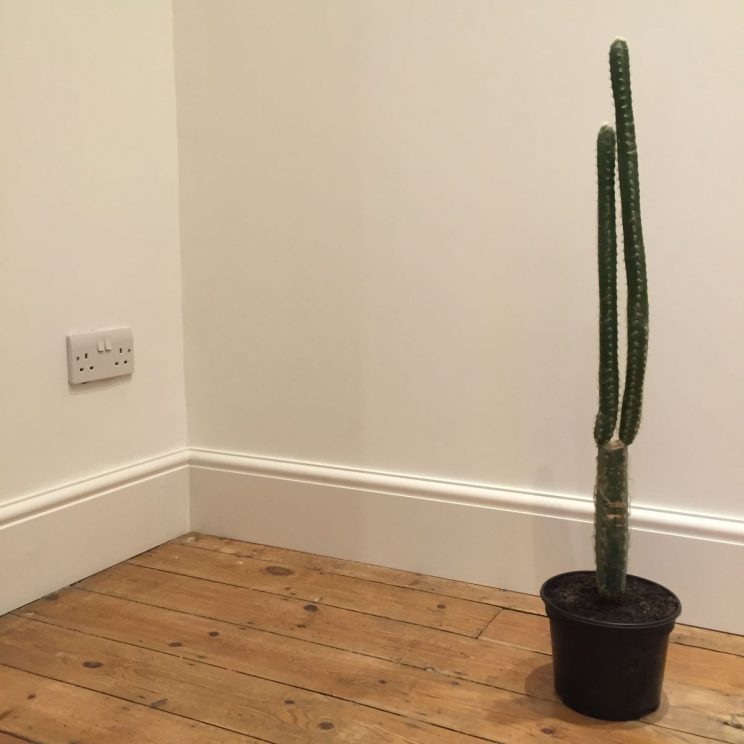 What you see above is actually a rooted middle segment from the original plant. Destroyed by our cat Rumbles five years ago. If you’ve ever wondered what happens to a large cactus when it falls over, I can tell you that it shatters like a very brittle cucumber. Thankfully, cacti and succulents are very easy to root from cuttings. This was the original aftermath: 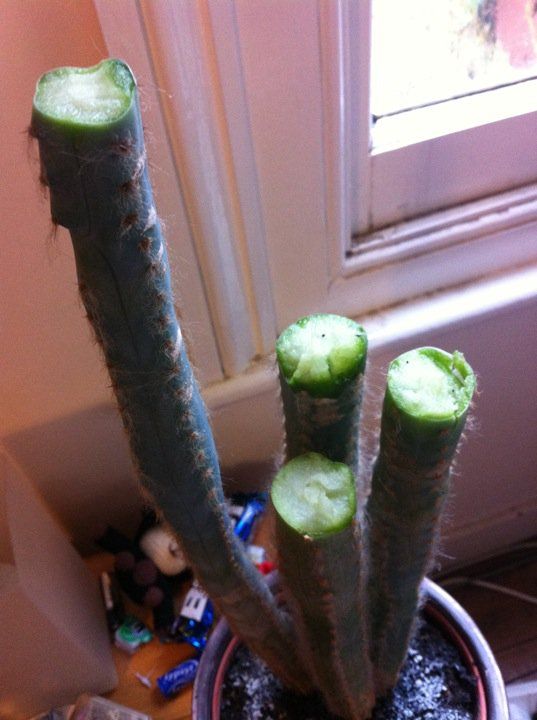 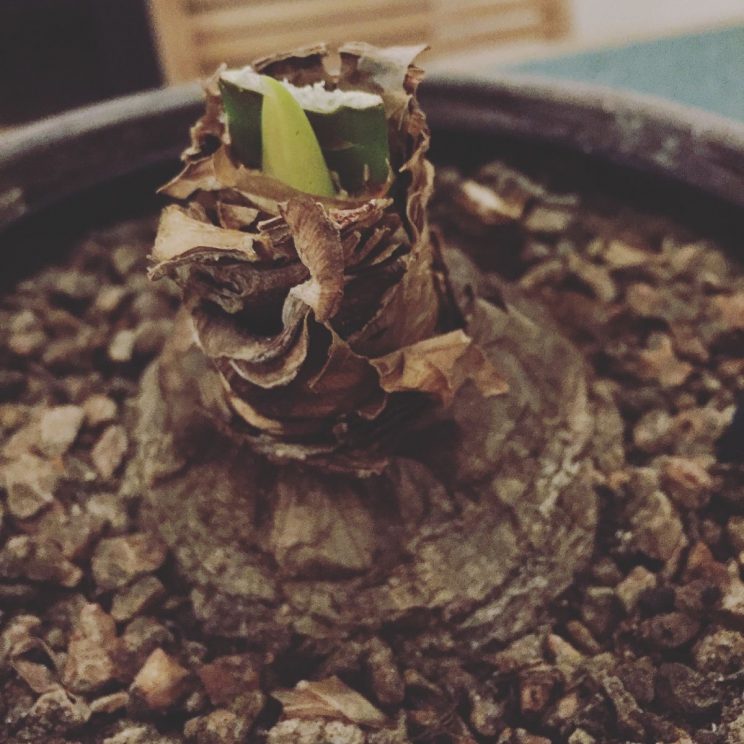 Last year I thought our Hippeastrum cybister ‘Sumatra’ had the most spectacular flower I’ve seen, and I think that is still fairly true. So I’m overjoyed that I have managed to get ours to survive, go dormant and now sprout a new bud this year. They’re not very demanding plants, you simply mustn’t over water them and follow simple instructions. Ours is later flowering this time by about two months, so I’ll adjust the timing of the forced dormancy to be earlier this year.

And finally, one cool cat 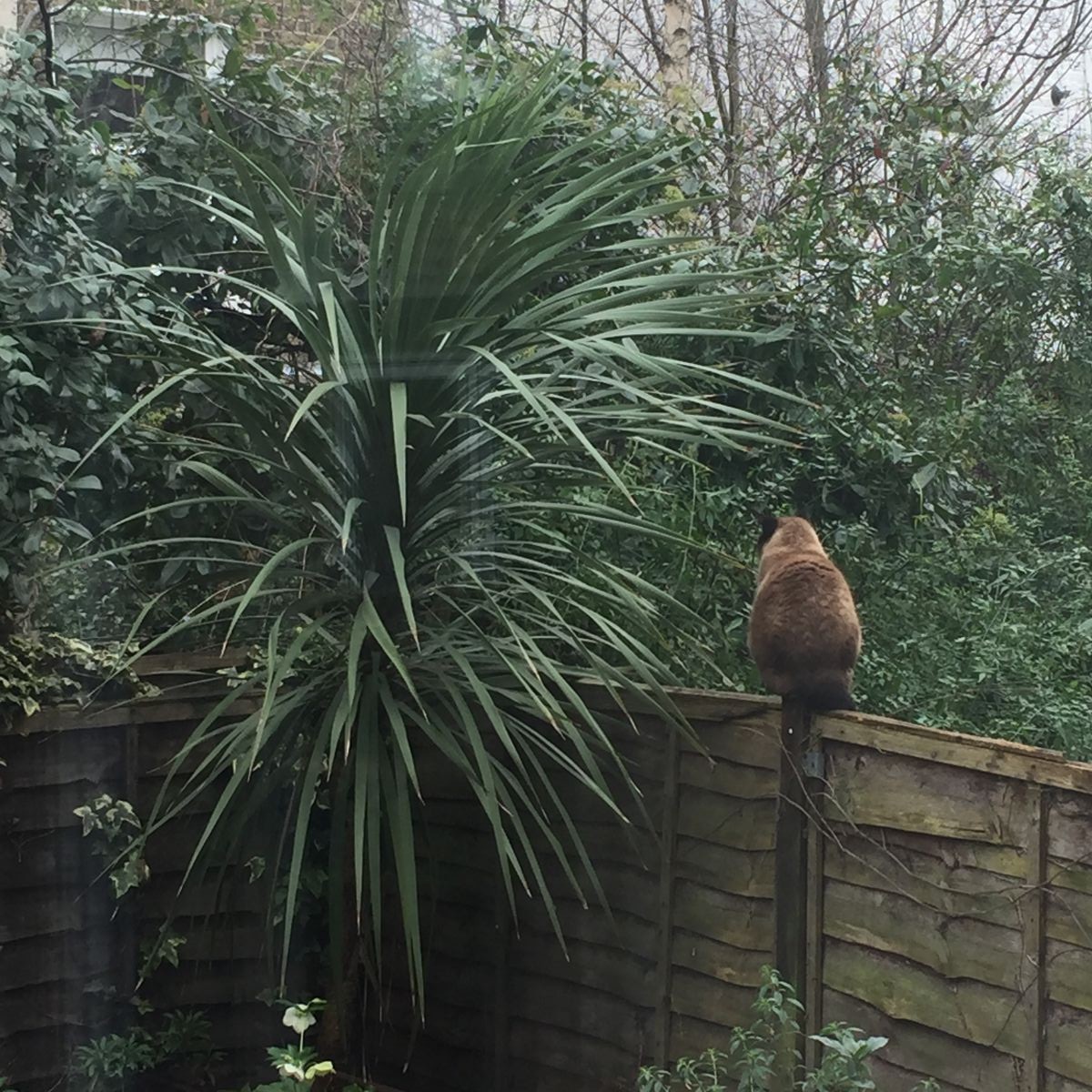