In the air but importantly, not quite here. Yet on mild sunny days the signs of spring are all around us and, here in London at least, some things are getting a little ahead of themselves. Including a butterfly receiving many glances from hungry birds. 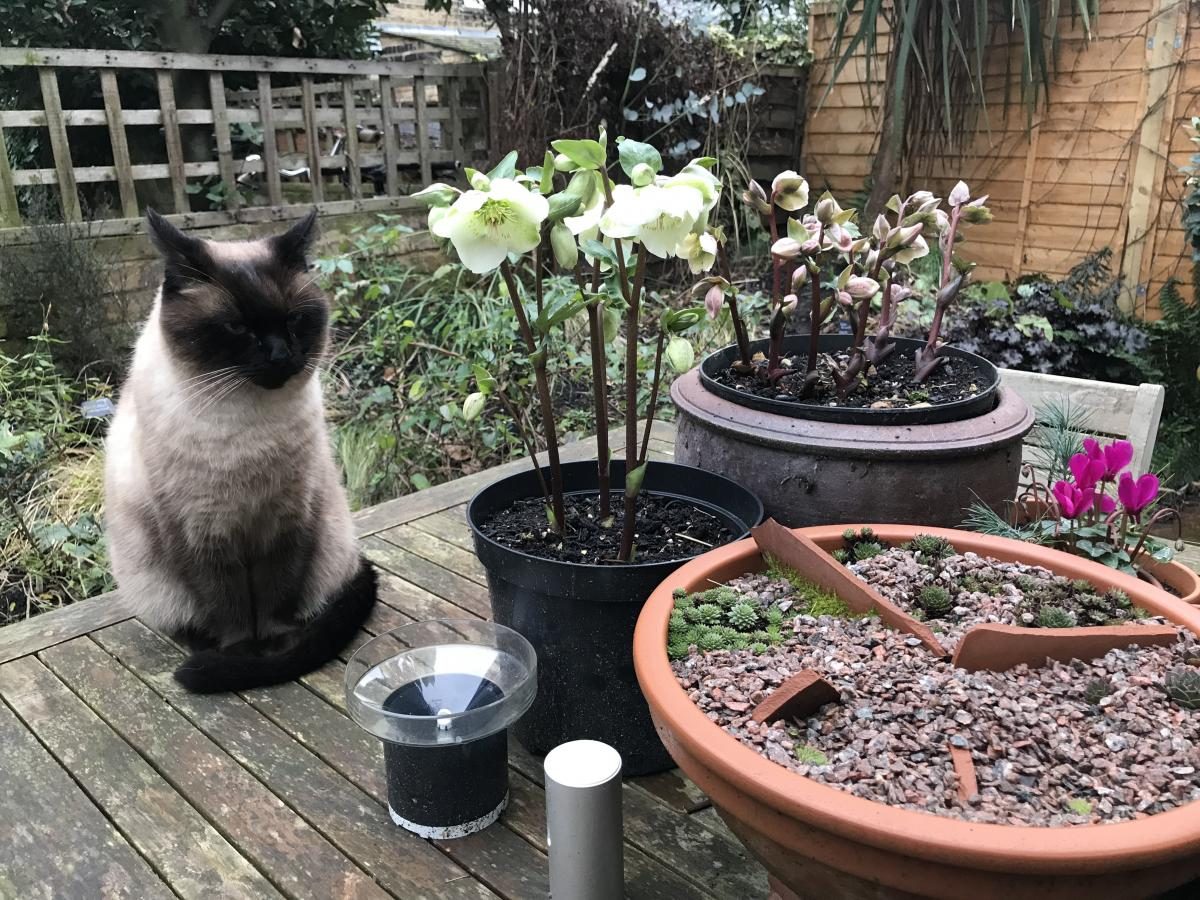 I should have realised I was late to the party by the fact Rumbles has emerged from his winter slumber curled on the sofa (like a tiny fluffy Smaug) to torment me with his favourite game of hide and seek. Always initiated by a casual stroll over to a plant before pretending to take a nibble to catch my attention. This week his focus has been on the sprouting Sweetpeas, Lathyrus odoratus ‘Windsor’.

Ornamental grasses were the plants signalling that I can’t wait any longer to start the annual chop back before spring. Out the front of our house I have a pot of Calamagrostis brachytricha, on going to tidy it up I found many green emerging shoots already in amongst last year’s dead growth. Normally I want to beat that growth so as not to cut the tops off the new leaves. What entailed was a lengthy series of very careful snips to get out the old and make way for the new.

It wasn’t the only grass. On checking, almost all of them are starting to grow again. Miscanthus sinensis ‘Gracillimus’ and M. ‘Limelight’ were at it, the Festucas, Pennisetum and even the Hakonechloa. Not just grasses, all of our Clematis viticella and C. texensis are smothered in shoots (including C. ‘Evipo032’ which has never really taken off but this year looks very strong at last). I have cut back the Clematis before they invest too much energy in the mass of new shoots.

I don’t know about you, but I find it’s best to be guided by the plants and nature rather than rigidly sticking to known timings for doing things in the garden (as helpful as those are). Learning the ways of your own patch. In times like these, when weather patterns are changing, it’s hard to be governed by a calendar that shifts. Spring is getting earlier each year and autumn later. In our garden too, all protected by our inner city courtyard’s microclimate.

That’s not to say that anything is predictable. In 2017, here in London we too were hit by the severe late frost in April that reset many plants, killing any new growth on those eager beavers. February is still to come, we’re not out of the worst of Winter yet. With this in mind, I still took the opportunity to coppice both my Eucalyptus gunnii and Sambucus nigra f. porphyrophylla ‘Black Lace’ with their swelling shoots (this is a fun job I look forward to every year for the symbolism as much as the task itself).

Interestingly, even the supposedly slightly tender Fuchsia triphylla, Ricinus communis and Solanum atropurpureum, which I leave outside, were also starting to grow again. I pruned one of the Fuchsias and removed the Ricinus as I’ll grow from seed – although they survive winter here, I find they take too long to come back into growth so from seed is better for our needs.

All of these positive signs and warmth caused me to throw caution to the wind and I moved the Persicaria amplexicaulis ‘Blackfield’ and Helianthus salicifolia – bought as emergency fillers for our September NGS opening last year – to better positions. Along with a Heuchera. A job I’ve been dying to do for months.

However, I am very conscious about bad weather returning – mild days like today are a sign of the crossover of seasons but give a false sense of security. More exposed and very sensitive plants, like our Salvias I left until we’re further into February (having said that, one had a tiny flower on it today!)

Otherwise, all is pretty much as it should be for this time of year. Snowdrops, which looked like they would flower early are now perfectly timed to peak in February (all planted as bulbs, not in the green). Hellebores are starting to come into flower now. Indoors Aloe variegata is flowering beautifully, Hippeastrums are budding and leaves of other houseplants are swelling in preparation.

I love it when plants are growing happily and start to bulk up. I don’t know if it’s relief that I’m looking after them OK, that they haven’t succumbed to some disease or just that it’s fun to see how they’ve changed. Perhaps all three.

I planted two Narcissus triandrus ‘Thalia’ bulbs a couple of years ago and last year they came back as a pair. This year they’d doubled in number and then I noticed today, beneath a Deschampsia next to them, an entire patch of new Narcissus leaves. Very exciting that in years to come the group will form a bigger part of our spring white garden. It’s certainly more fun bulking up plants yourself over the years than buying a whole tonne of bulbs and just planting them. Though of course it takes patience.

All in all, it’s a good day on Littlebury Road. Our garden, after looking a right mess for most of Winter, is gradually looking tidier and more importantly, ready to come back to life with all its little surprises.