So much happens in May, you blink and you miss it. When you open your eyes in June though, everything has gone from dull browns to a multitude of bright greens and the first pin pricks of colour from Lupins and Alliums.

Here’s our border yesterday (4th June). By the end of the month all of the green will be a mess of neon pinks and purples: 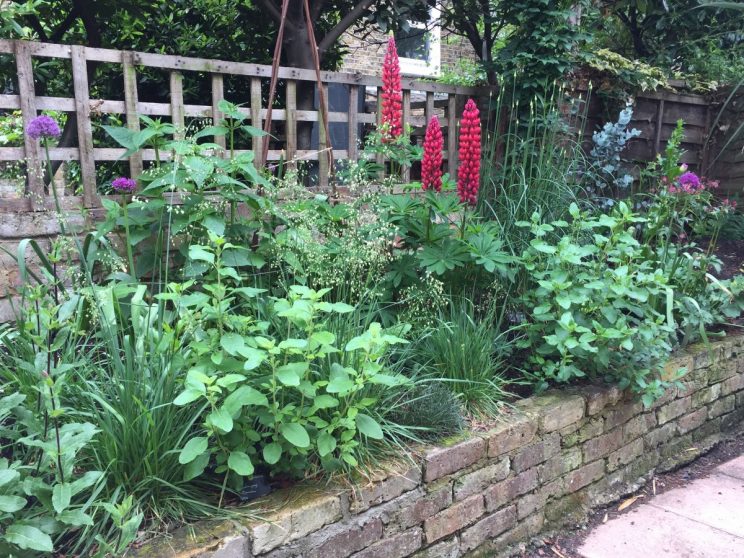 Looking back at one of my last updates, it amazes me how much things change throughout May. I’ve been particularly pleased with the transition from white spring garden (as patchy as that was) to the start of our neon jungle. Just as I’m bored of one colour scheme along comes the other.

Getting the Chelsea look

The grass, Briza media, which I sowed from seed in spring 2015 are finally flowering, reminding me why I planted them in the first place with their airy cloudy look. If I squint through the Briza media at our Lupins, there’s about 1 inch of our garden that looks a bit ‘Chelsea Flower Show’ lol! Can you see it? What do you mean “no” ha! 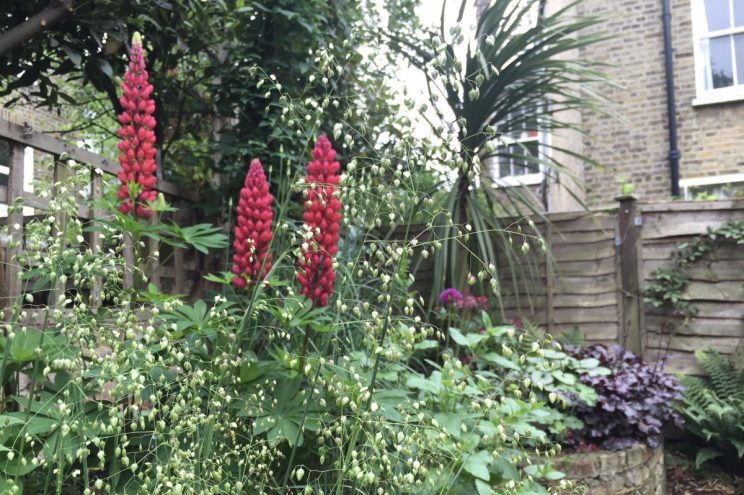 Out the front we have a tiny area that gets a lot of the hot afternoon sun until sunset. Because I love pure white flowers but want to keep them out of the colourful back garden in summer, I’m using this spot for a micro Sissinghurst white garden. It doesn’t look like much right now, but I’m pleased with how everything is shaping up.

Below is a picture taken yesterday. The Clematis has just finished flowering so looks a bit tatty (but did look good honest) and the other pots are full of small plants that need to grow on: 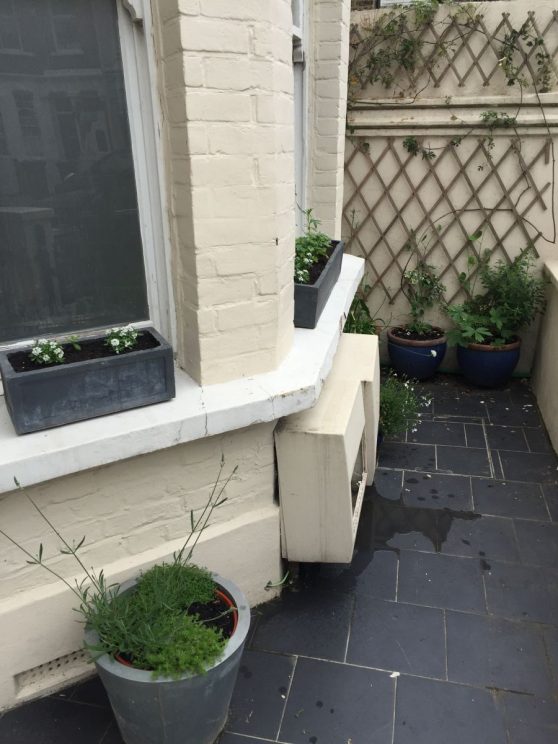 I’m looking forward to sharing pictures of this in a month’s time because I think it will fill out into quite a simple and elegant area. Unplanned but most plants are scented too. The large silver planter is full of white herbs – Lavender, Thyme, Rosemary and Chamomile. The window boxes Alyssum and Lupins (from seed).

Actually, the reason I’m so pleased with it is because my seed grown plants are doing well. In the blue pots my Astrantia major subsp. involucrata ‘Shaggy’ are about to flower for the first time, and the Lathyrus odoratus ‘Royal Wedding’ are growing like crazy.

The Fuchsia ‘Hawkshead’ that I moved from the back garden to the front has never looked happier, nor has the ivy (Hedera helix) cutting – in fact, I noticed while rummaging in the leaves that the Fuchsia has already started flowering: 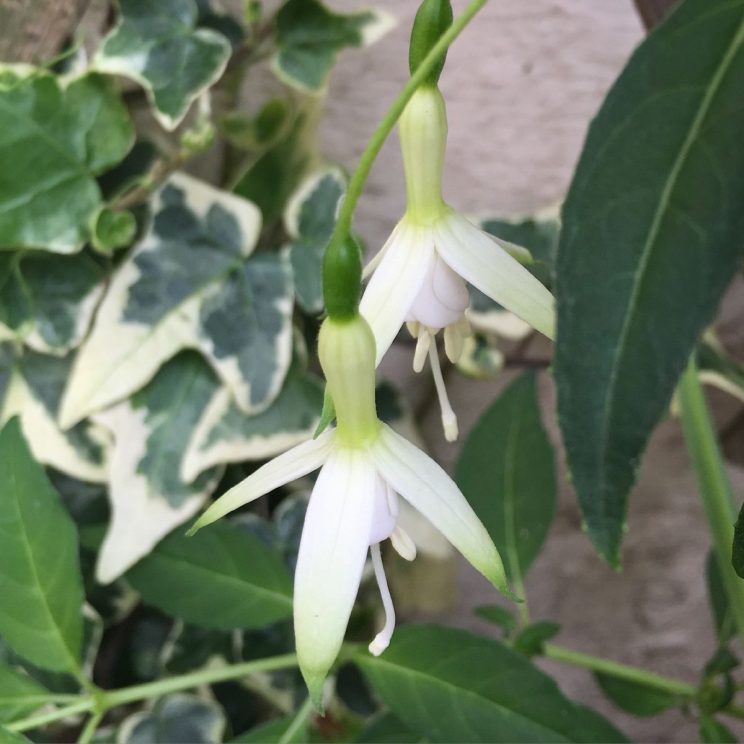 I’m pleased to report the two Dahlias I left in the border – ‘Emory Paul’ and ‘Bishop of Canterbury’ – to overwinter outside are both back and growing better than ever. Better than the lifted Dahlias in fact, except for ‘Black Jack’ which is like a force unto itself.

They started growing again in May and in the last week are growing rapidly, very quickly catching up with the tubers I planted again inside in March. As a result, I’ll be leaving more outside in future – including all of the Dahlias down the allotment.

The mini Dahlia ‘Pupinka’ has been flowering since mid-May. 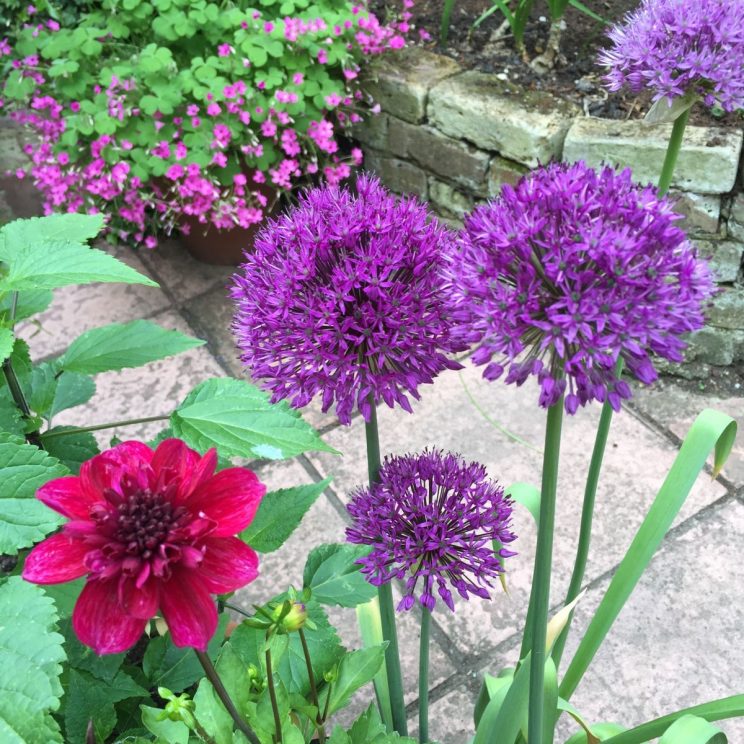 Let’s all pause for a moment to admire this: 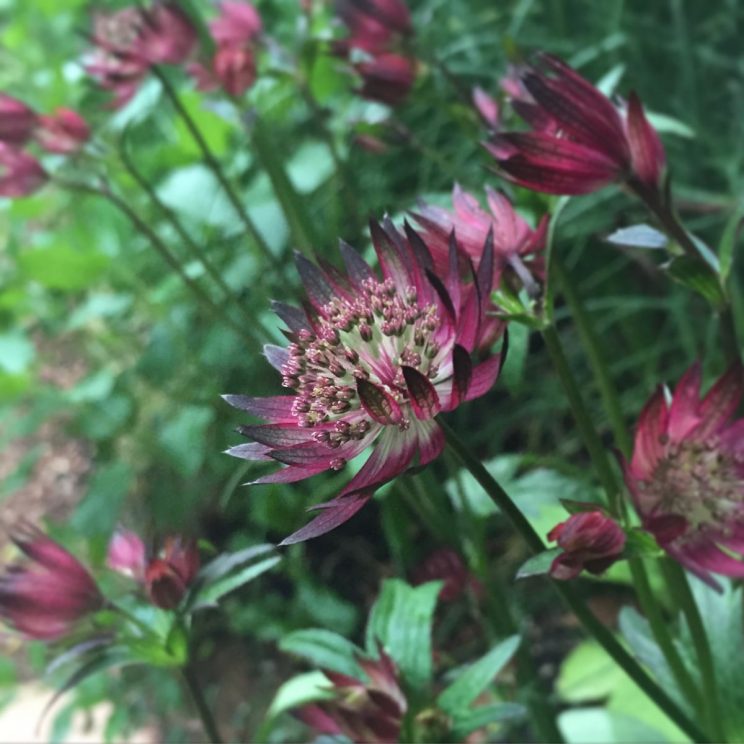 The dark Astrantias, like our ‘Ruby Glow’ above, look incredible (I think) close up but they don’t have the same effect from further away as part of a border, they just blend in too much. Which is a shame, but not all beautiful things have to be appreciated from far away. Astrantias were the first flower I fell in love with and I don’t think anything beats the pure white varieties.

Fern wall back to full glory

After looking tatty throughout winter, the fern wall is now luxuriant with new growth – much to my relief. I particularly love the Adiantums and the new fronds on the Blechnums: 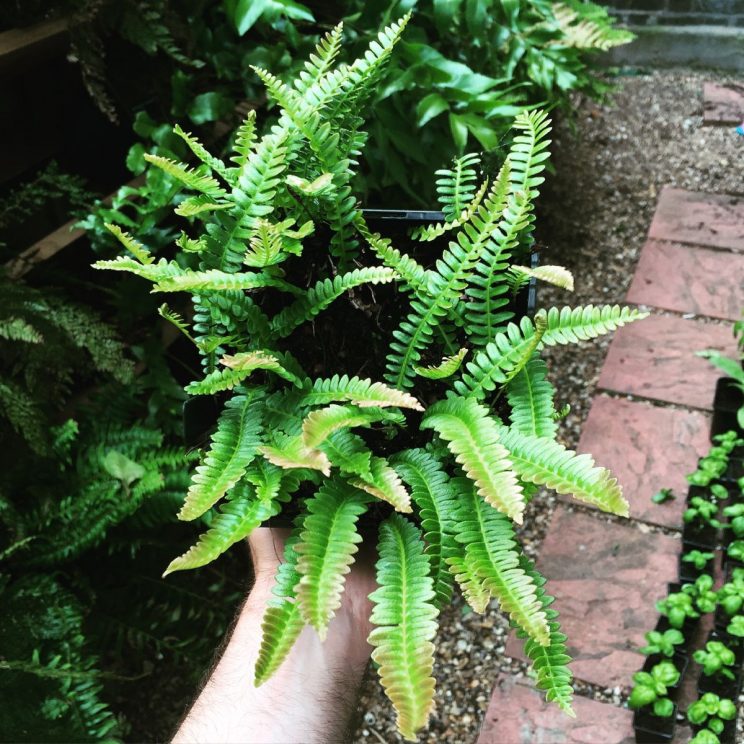 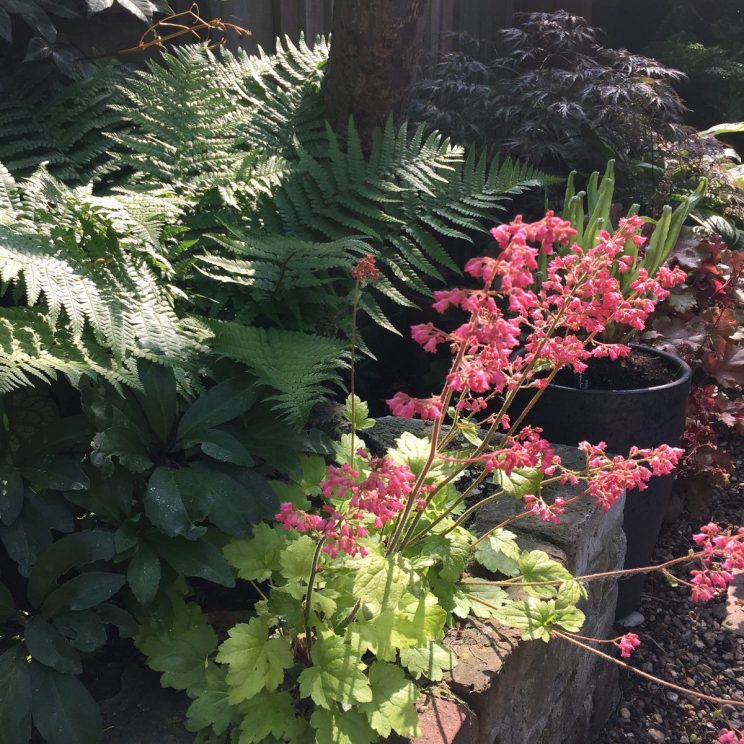 I first started gardening in our garden in the shadiest bit down the side of the house, so I’m really happy that it now looks so full. In the morning light it was looking a little bit Japanese Gardenish.

Finally, I’ll leave you with a photo of Hosta fortunei ‘Francee’ which surprises me every year with its lush growth and three years so far of being nibble free (touch wood). 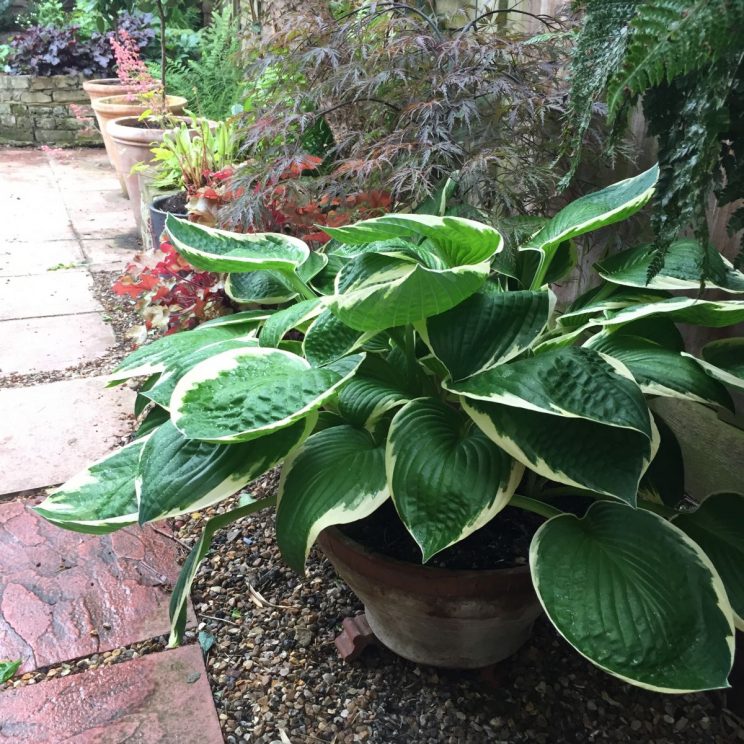