Three years ago almost to the day I wrote this blog post about discovering the existence of Dr Nathaniel Bagshaw Ward’s Clapham home (thanks to the Clapham Society) where he housed a herbarium of over 20,000 specimens and a garden full of rare plants. I’ve been slightly obsessed with it ever since because its demolition has been on the cards for years. It feels tragic. To recap, Ward was the Victorian botanist whose name is attached to the portable glass boxes used to transport plants from around the world back to plantaholics in the UK. Wardian cases helped revolutionise plant hunting and with it plant knowledge. The house in Clapham was his base from which he will have visited Kew, the Chelsea Physic Garden and other famous institutions from this fundamental turning point in horticultural history.

The house now, at Clapham North tube (around the corner from our house) has been left to fall into disrepair. It is a sorry state:

This week I was able to finally live a mini personal dream to see the back garden of the house. I was fully aware (*ahem* because I’d half climbed up the fence of a pub roof terrace to try and sneak a peak three years ago…) that none of the garden was likely to be left, even so, seeing the back of the house and where Ward and other Victorian botanists of his time – his contemporaries – will have stood was magical.

I know it’s been allowed to become dilapidated but seeing that central doorway, the matching central curved window, the walkway across the gap from the basement stairs to the garden. All original features from the height of Victorian Britain. In the downstairs window on the right you can see shutters that are almost certainly original too. It’s a beautiful scene.

My heart sunk however because work has begun to demolish the entire house apart from the front facade.  The view above will be no more in a matter of weeks. 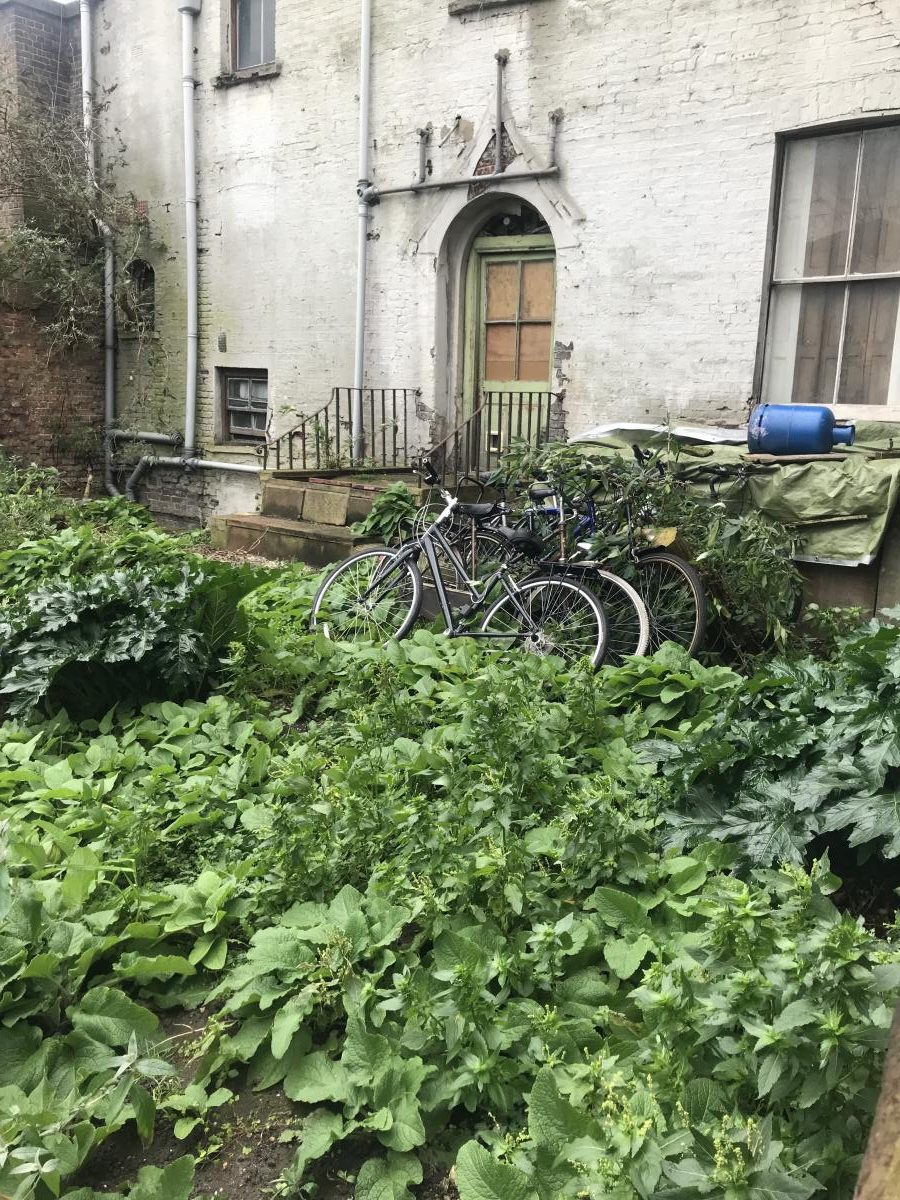 Ward will have lived here in the mid-1800’s, so none of the plants are likely to remain except, potentially, some lime trees that have been badly pollarded recently. It’s interesting to see Acanthus mollis here however. A British native plant used regularly in gardens. Are these ancestors of garden plants or of wild flowers from when Clapham was woodland and farmland (not long before this house was built). 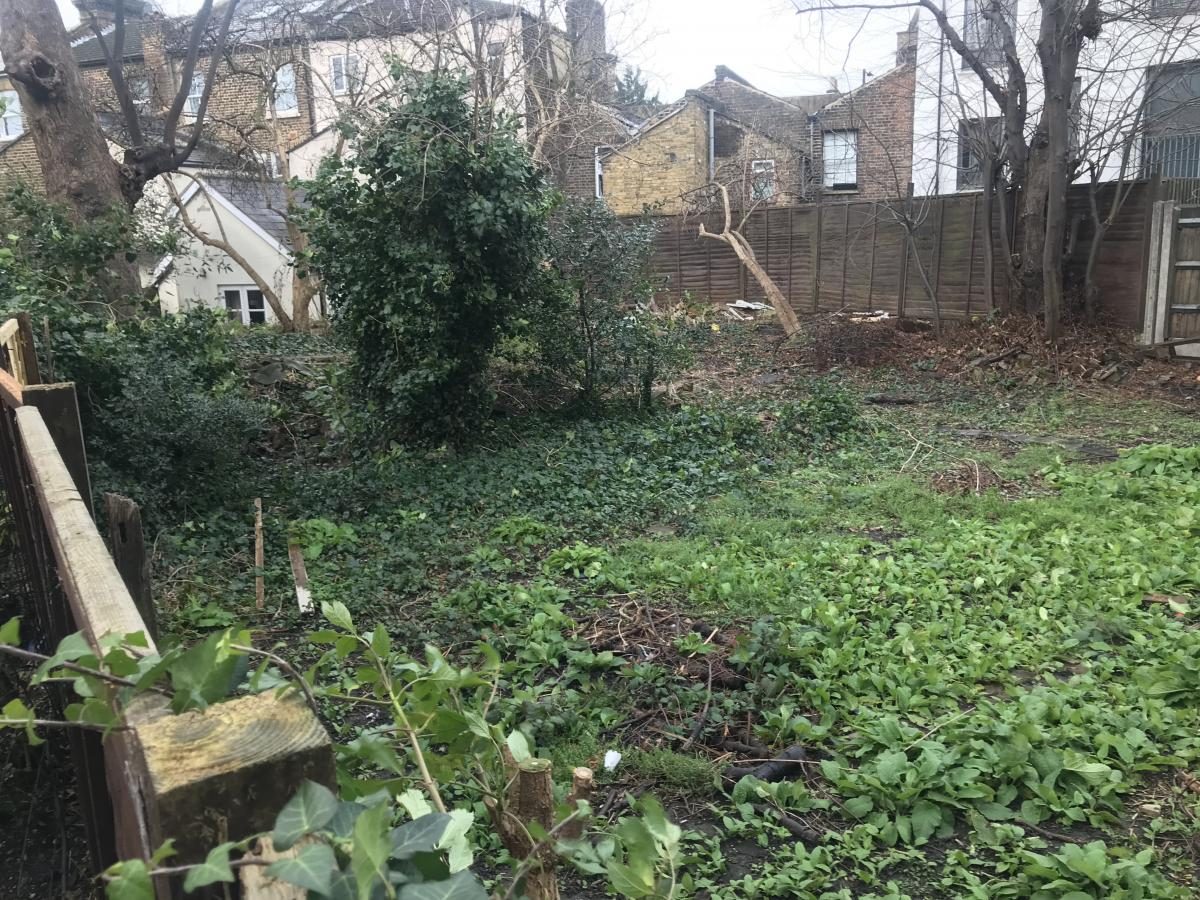 The garden is huge. So huge the new development plans show at least half of this intended to be built on for flats and the rest of the garden to be covered with a very modern space.

From above, we get a better view of the garden. 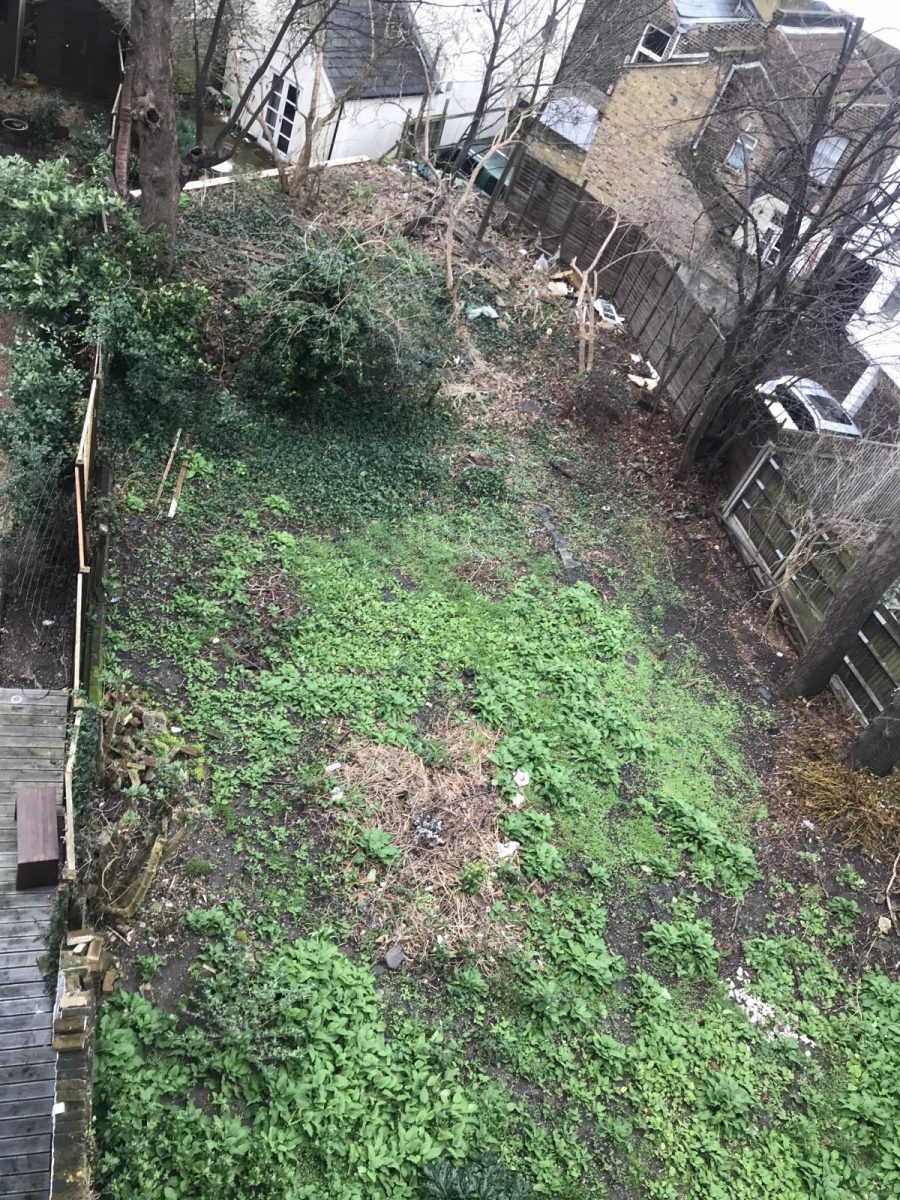 It’s hard to see in this photo but there is some hard landscaping to be seen in the middle that are the edges of curved beds (look for the row of grey stone where the ivy, weeds and soil join). After seeing this I felt compelled to do some research into the history of it. There has been some talk of the building locally but what of the part of the house that was of no doubt of much more importance to Ward himself, the garden?

For the first time since the Victorian era, below people can see a plan of the garden from Ward’s time (taken from a copy of the 1870 ordnance survey map).

Sure enough, there is a curved bed (the angled part of the garden has been built on already).

Ward died in 1868 and moved out of London shortly before this due to ill health. So it’s possible that someone nipped in and redesigned it between then and the survey, but unlikely. Even so, this is a layout that very closely matches the layout of the curved beds we saw in the garden this week – which could make it a perfectly preserved Victorian garden design.

People familiar with Ward’s Clapham home story will notice that his famed glasshouse is not seen on this plan. Which is interesting. We had a moment of excitement when we saw this metal frame in the garden. It’s likely to be too modern to be a remnant of the famous glasshouse but it is fun to dream. 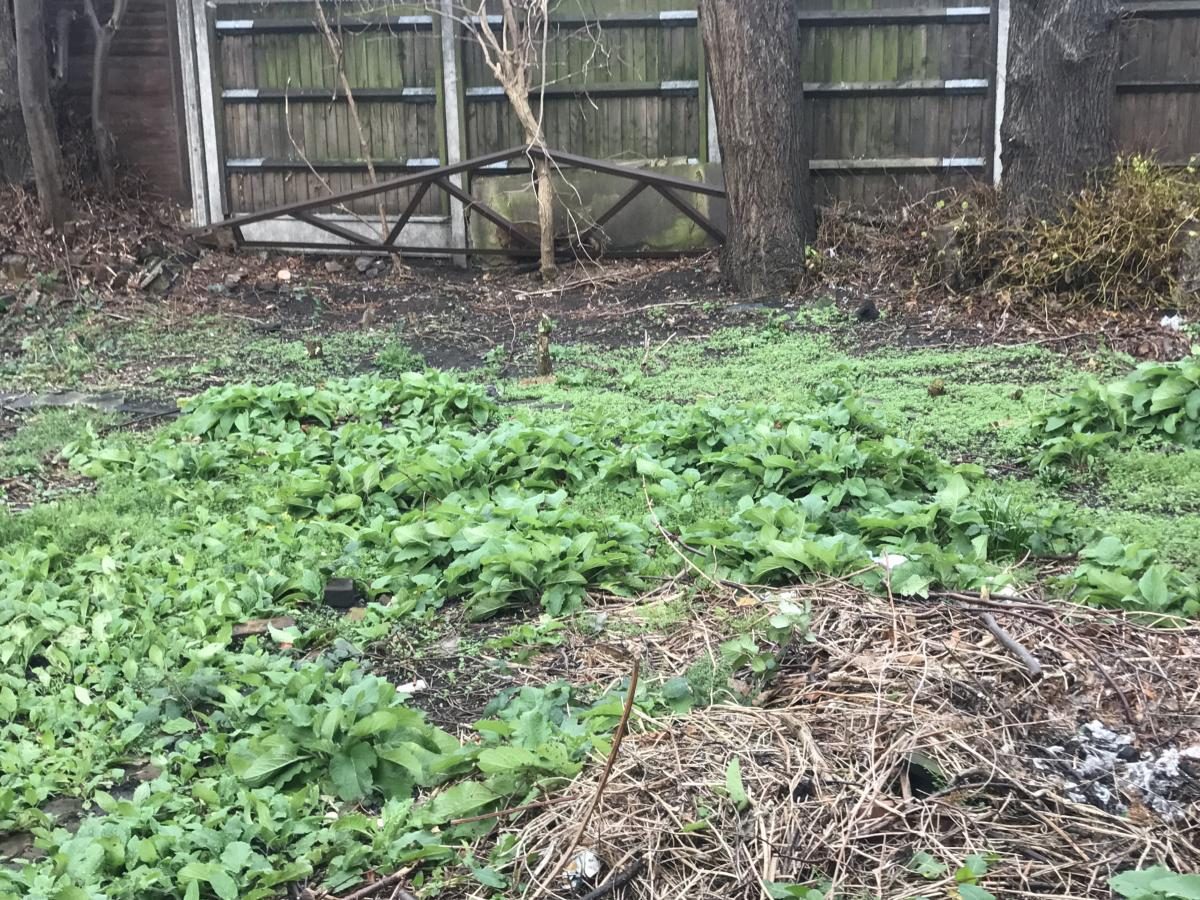 The more you look at the building now, the more you can see how it has deteriorated so badly. Felt has been used on the roof instead of tiles, a sure fire way of allowing water in. 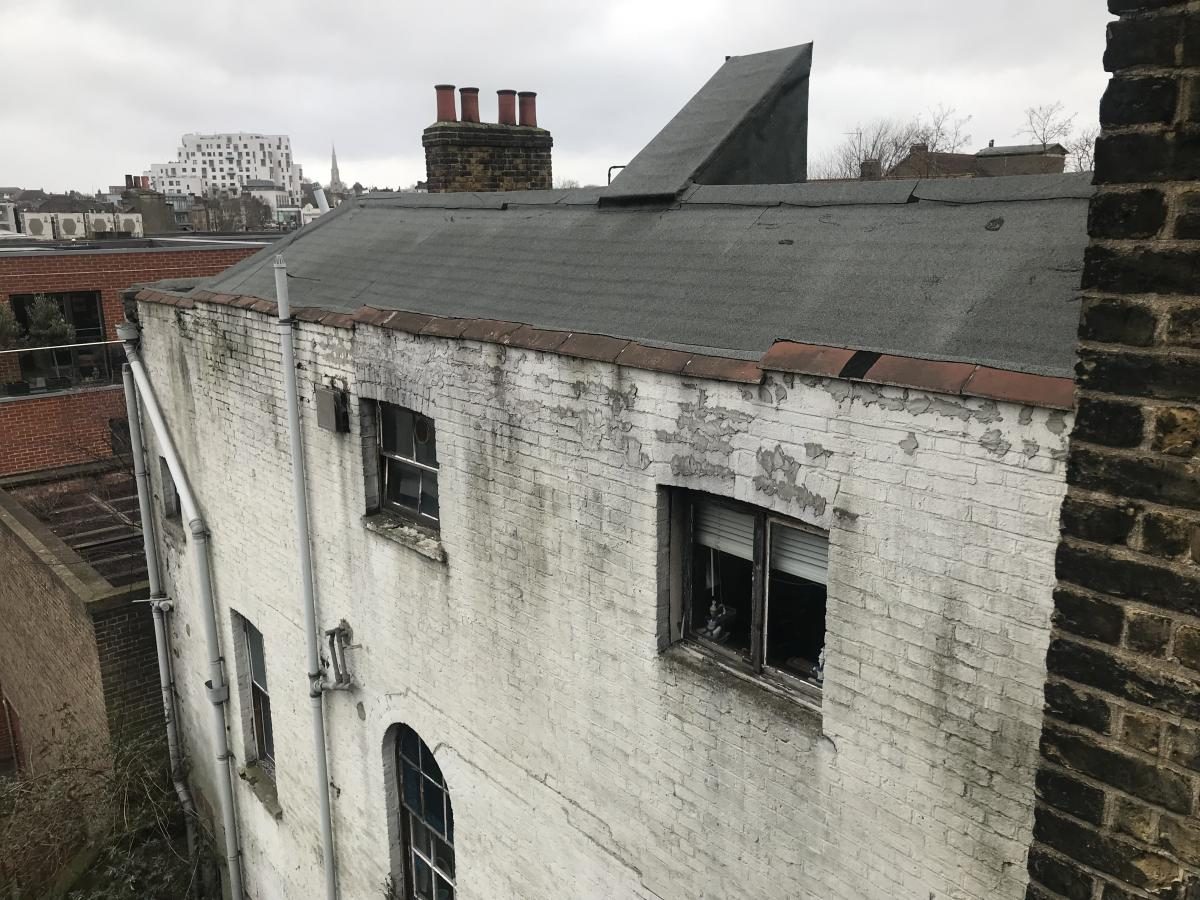 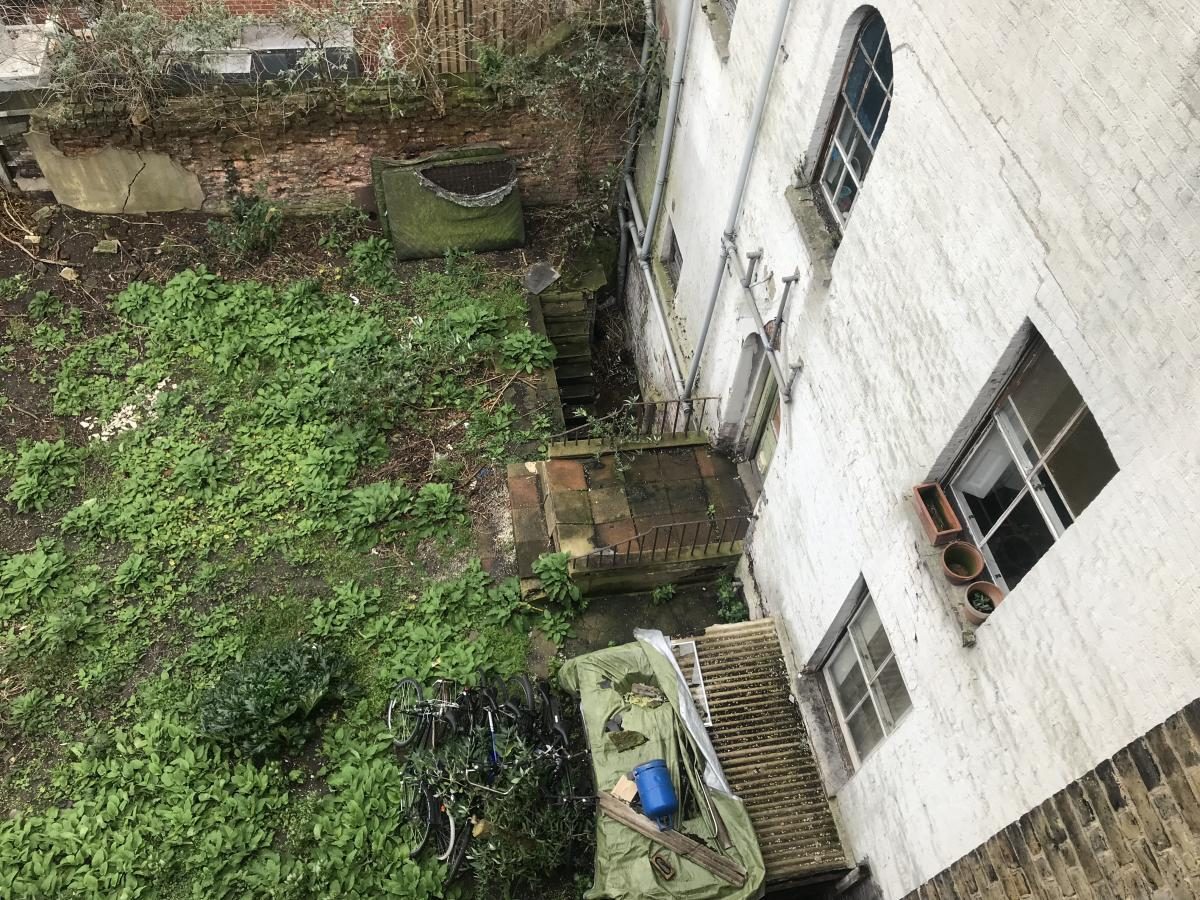 You can see more original window and shutter work in this view and the steps to the basement.

Another view of the garden.

Ward’s role in botany isn’t fully known, he wasn’t the only person to invent a glass case for transporting plants. His name is associated with them however and that points to the fact he played a bigger role than we realise now. I look at the house and I feel sad. If I had the money I would transform it back into a site of horticultural heritage for all to enjoy. But who has millions of pounds spare.

I feel even sadder about the garden. Almost certainly ignored during research and planning for the building, who knows what history is beneath those leaves and soil. Especially as Victorians were notorious for throwing all of their rubbish into gardens rather than tips – bin lorries weren’t quite such a popular invention back then…