Hello loyal reader! (Ignore if first visit or you plan on never returning). In the run up to our September open day I was worried. Our dependable dahlias were largely delayed flowering by approximately a month thanks to the nine weeks of drought over summer. Buds are numerous but they certainly didn’t come fast enough for our open day this year, normally they’re guaranteed! However I needn’t have worried as at times like this, the diversity in foliage steps up to bat. And this year leaves are talk of the town, not flowers. 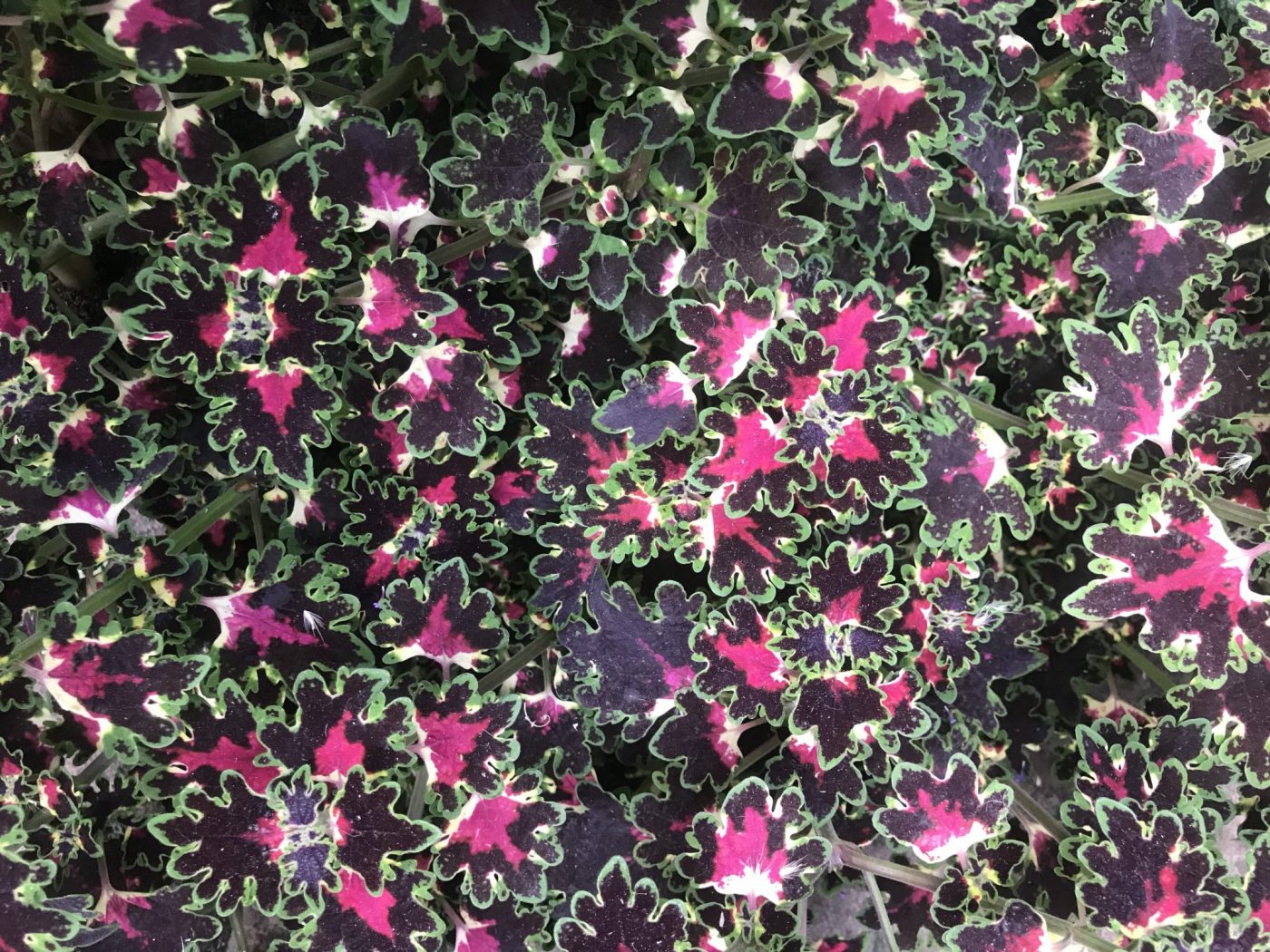 Most visitors to our garden will point at a plant and say “I never used to like those” because I grow lots of stuff that became unfashionable for some reason. I’m not sure how plants can actually go in and out of fashion, it makes no sense and is usually because they were grown in an ugly way but I digress. I’ve always grown Solenostemon (still wrongly called Coleus) because they’re friggin amazing and this year ‘Burgundy Wedding Train’ has stolen the foliage crown purely because it’s become a sprawling pink and burgundy weird monster. 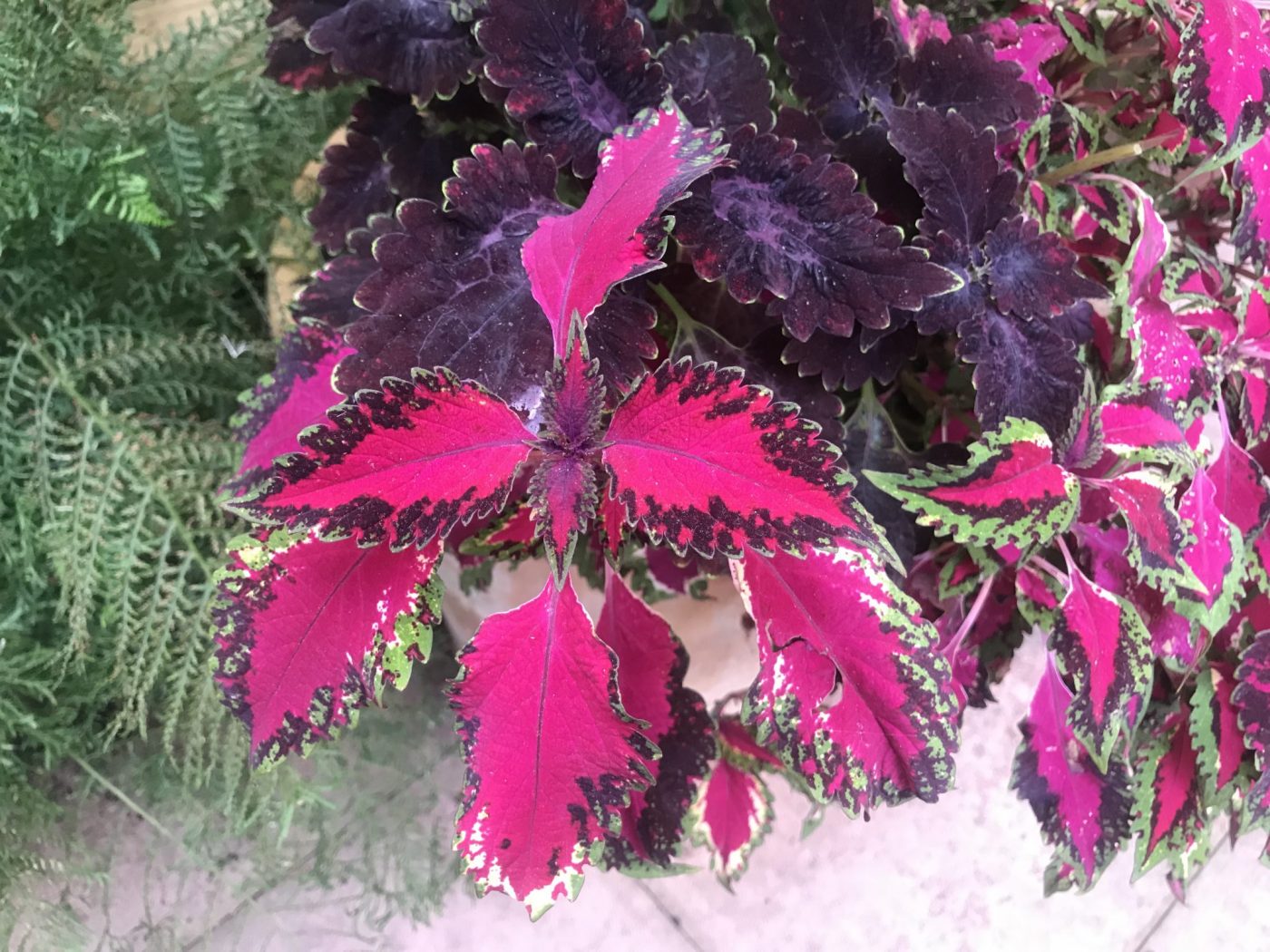 Solenostemon ‘Pink Chaos’ is usually one of our most talked about plants because it’s such a shocking neon pink and has prime time in our main pots i.e. they can be seen from space and that’s the way I like it. Good for shady spots and also easy from cuttings if you have a heated greenhouse. I find they don’t like the transition from outside to houseplant in our flat. 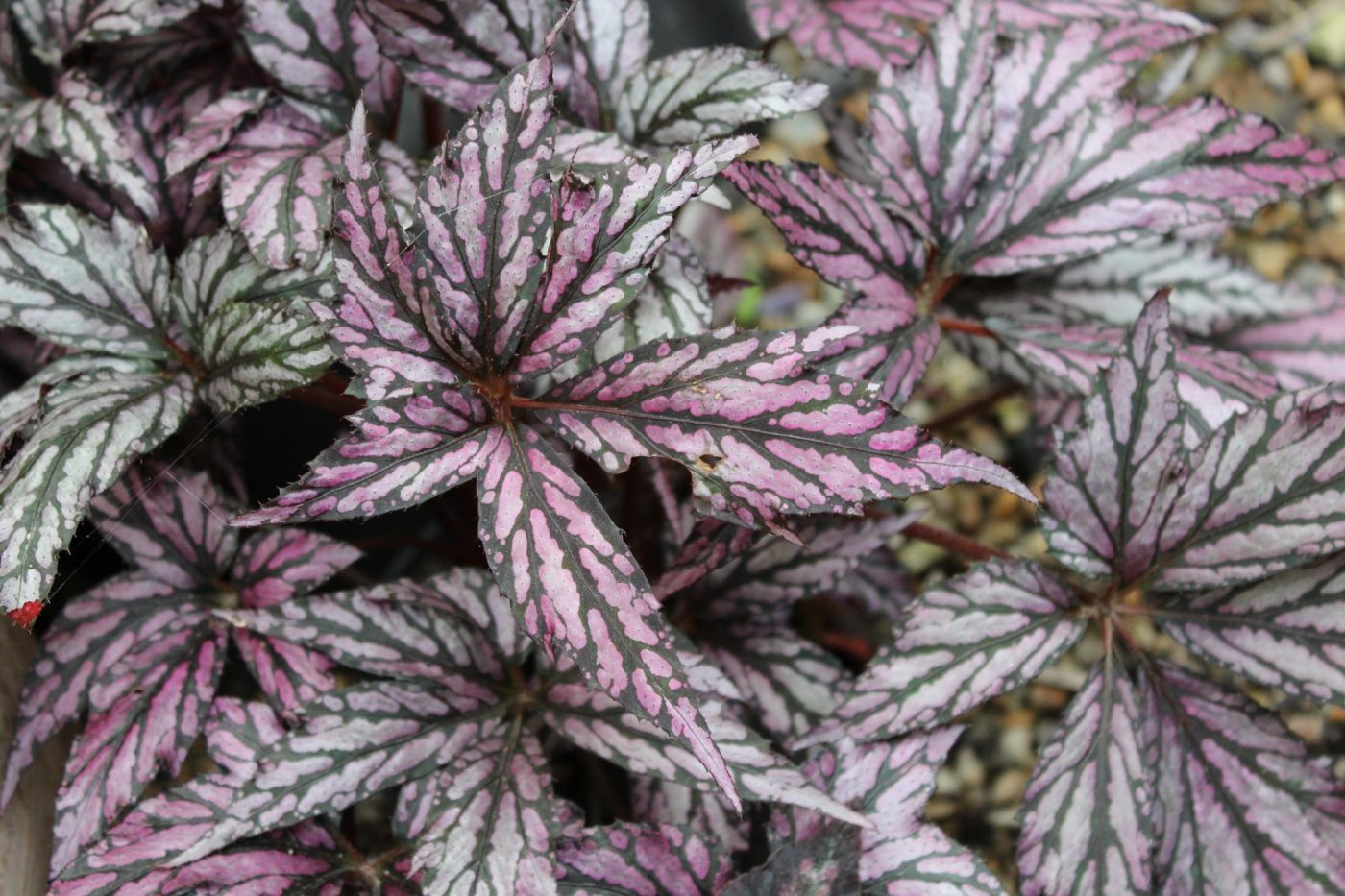 You can tell the colour scheme in our garden is evolving because until this year I have resisted the beautiful Begonia ‘Benichoma’, it was too light pink. I have caved as you can see and I am glad. There are two colour undercurrents overtaking our garden and transforming it and this lighter pink is one of them. Not too much but I have a worrying feeling it’s making things more sophisticated. 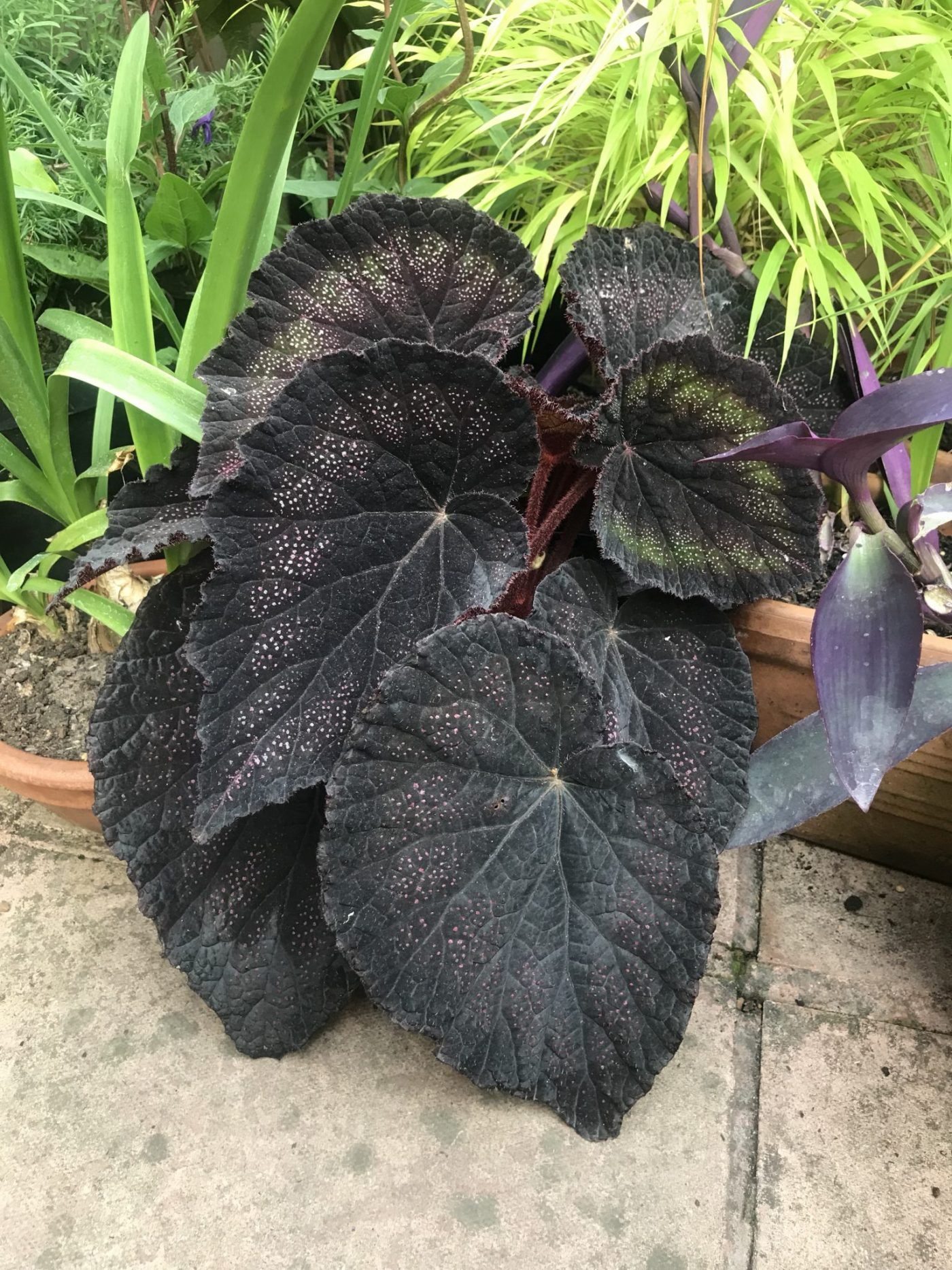 This year you will find me unashamedly raving about my Begonias – for reasons we will never know they have decided that 2018 is their year. Normally large leaved Begonia rex plants I struggle with because they prefer humid and bright (but not direct sun!) spots found in conservatories, which we don’t have. ‘Black Knight’ above is one of two Begonia rex that are my personal favourites and it really does look remarkable at the moment. And if you don’t like black leaved plants, tough because… 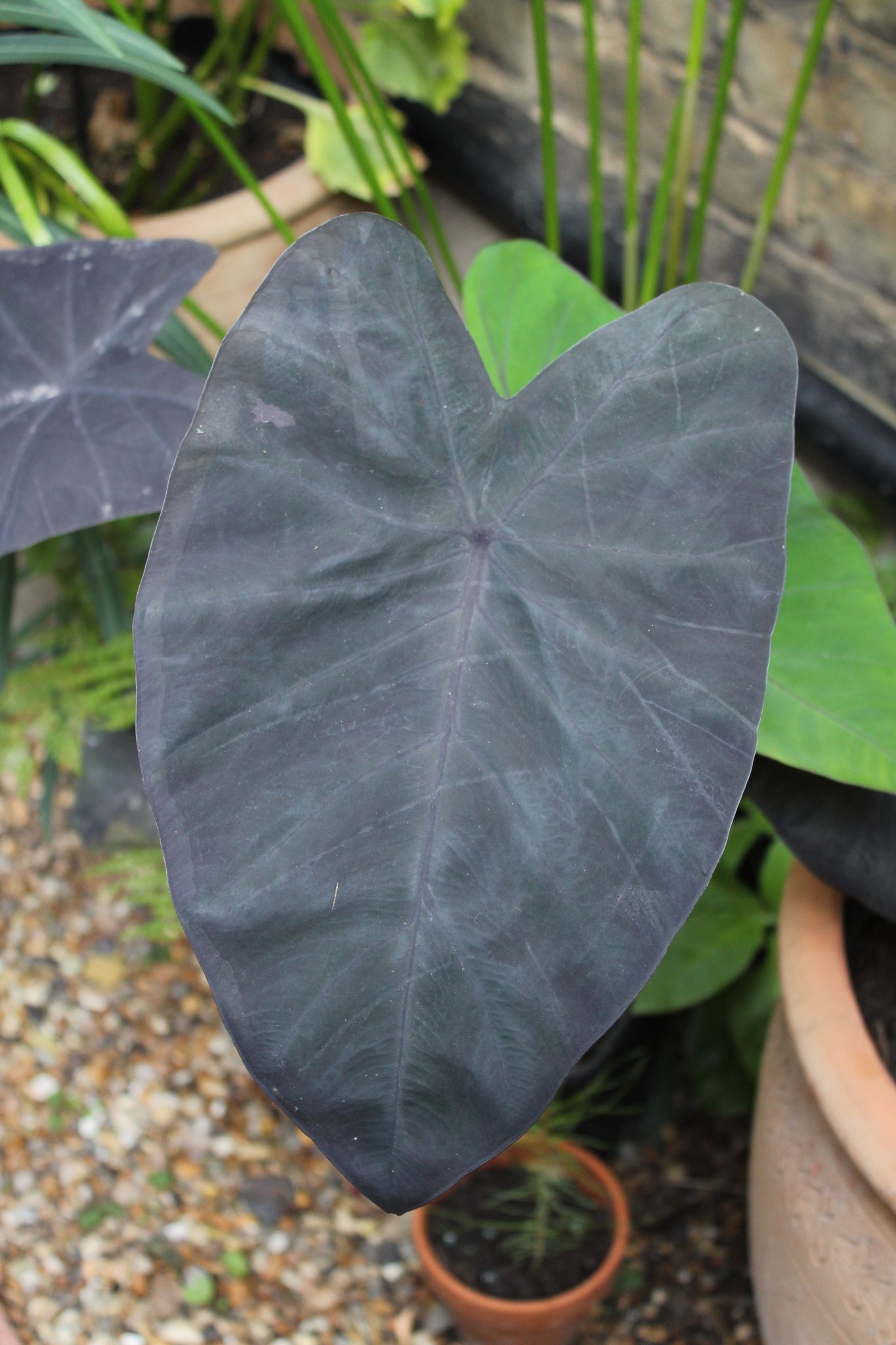 I’m not sure about Colocasia in our garden, the leaf shape isn’t quite right for what I’m after however there is one exception and that is the above. Colocasia esculenta ‘Black Magic’ gets a golden ticket because it is such a rich black with an under hint of purple. Unfortunately, this really is a difficult plant to grow in the UK without a heated green house. I bought this in the depths of winter, it died right back to ground level inside. I managed to get it to grow a couple of tiny leaves again but it withered back shortly after. Then, after I chucked it outside in summer and forgot about it, it perked up. Always the way! 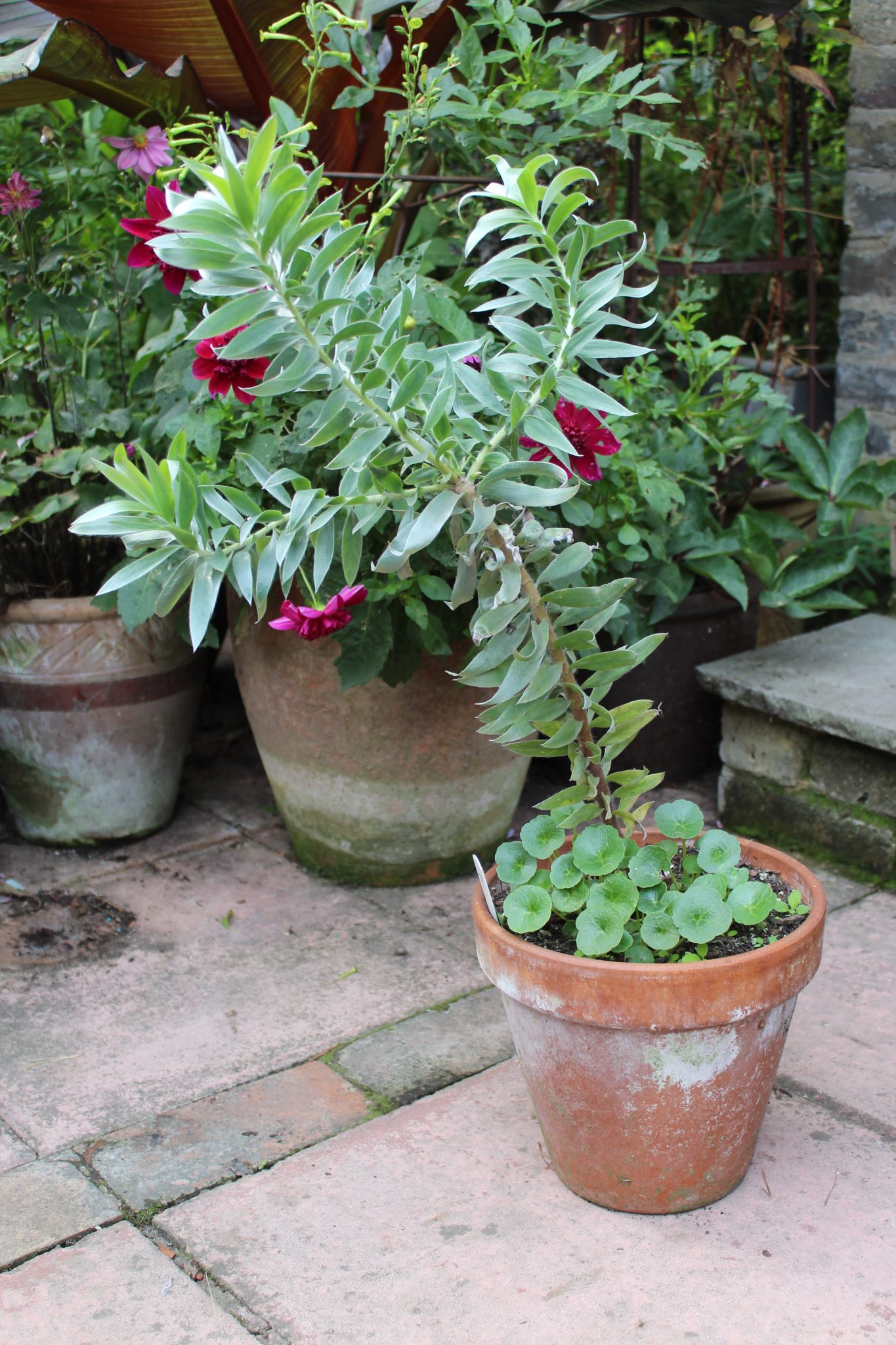 This pot of silver belongs to Leucadendron argenteum, a critically endangered plant in the Proteaceae family from South Africa. I found it growing in a shop in Cornwall. Its leaves are covered in soft silver hairs causing the plant to glisten in a way I have never seen another living thing. It survived our harsh winter but the growing point died back causing it to branch (as happened with many of our plants). Growing beneath it is our native wild flower Umbilicus rupestris, which I love – I sprinkled the seeds into the pot of this plant last summer so I could bring them into our garden. 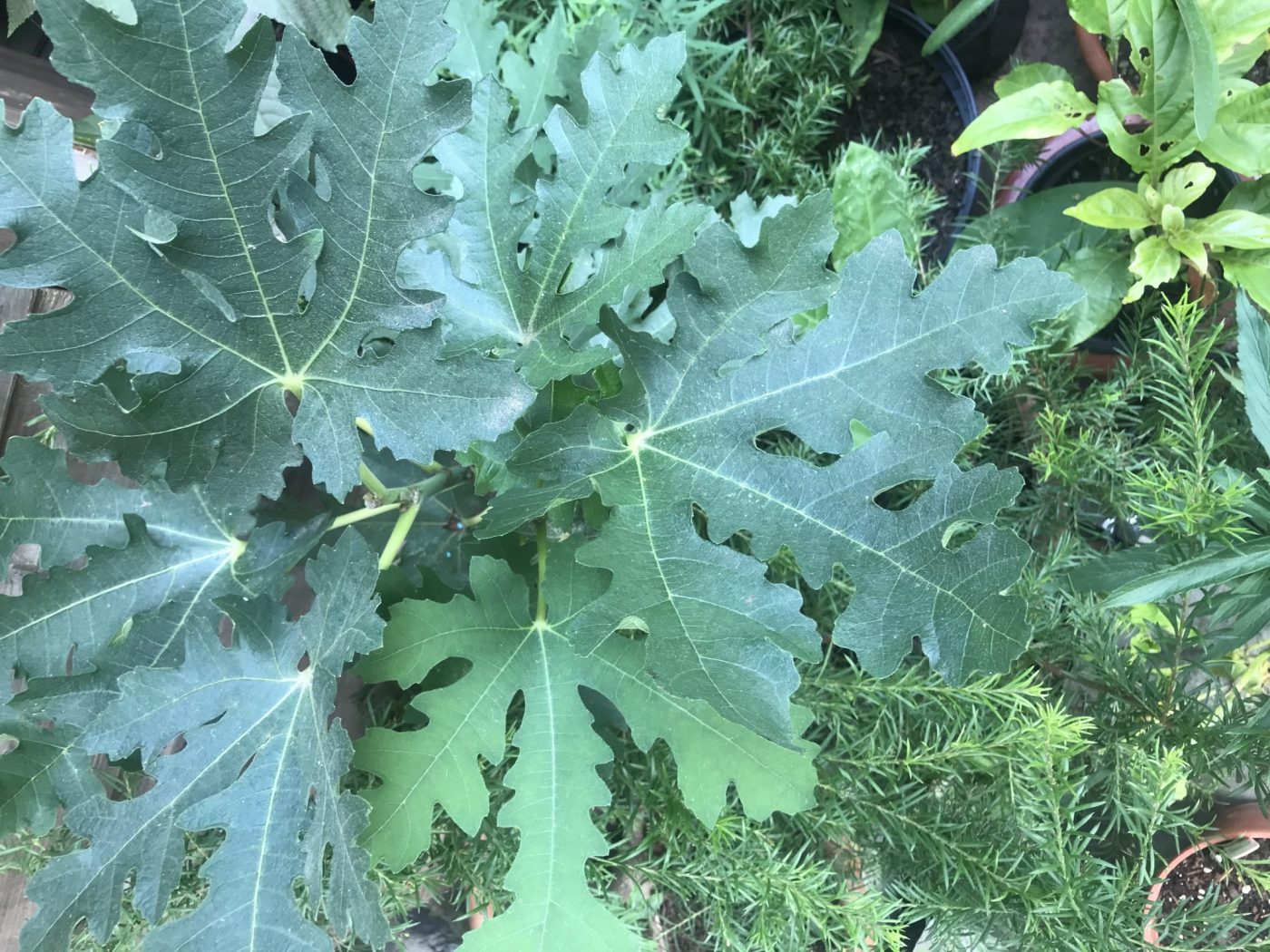 “Is that a fig?” yes it is I say. I’ve had my eye on this plant for a few years and eventually bit the bullet last autumn – I was worried another foliage only plant would tip the balance too much. Starting as a tiny little sprig, without noticing it’s suddenly a nicely sized plant. This wannabe tree will fast out grow its pot but I’ll worry about that when I come to it. I like this leaf much more than the standard fig leaf. 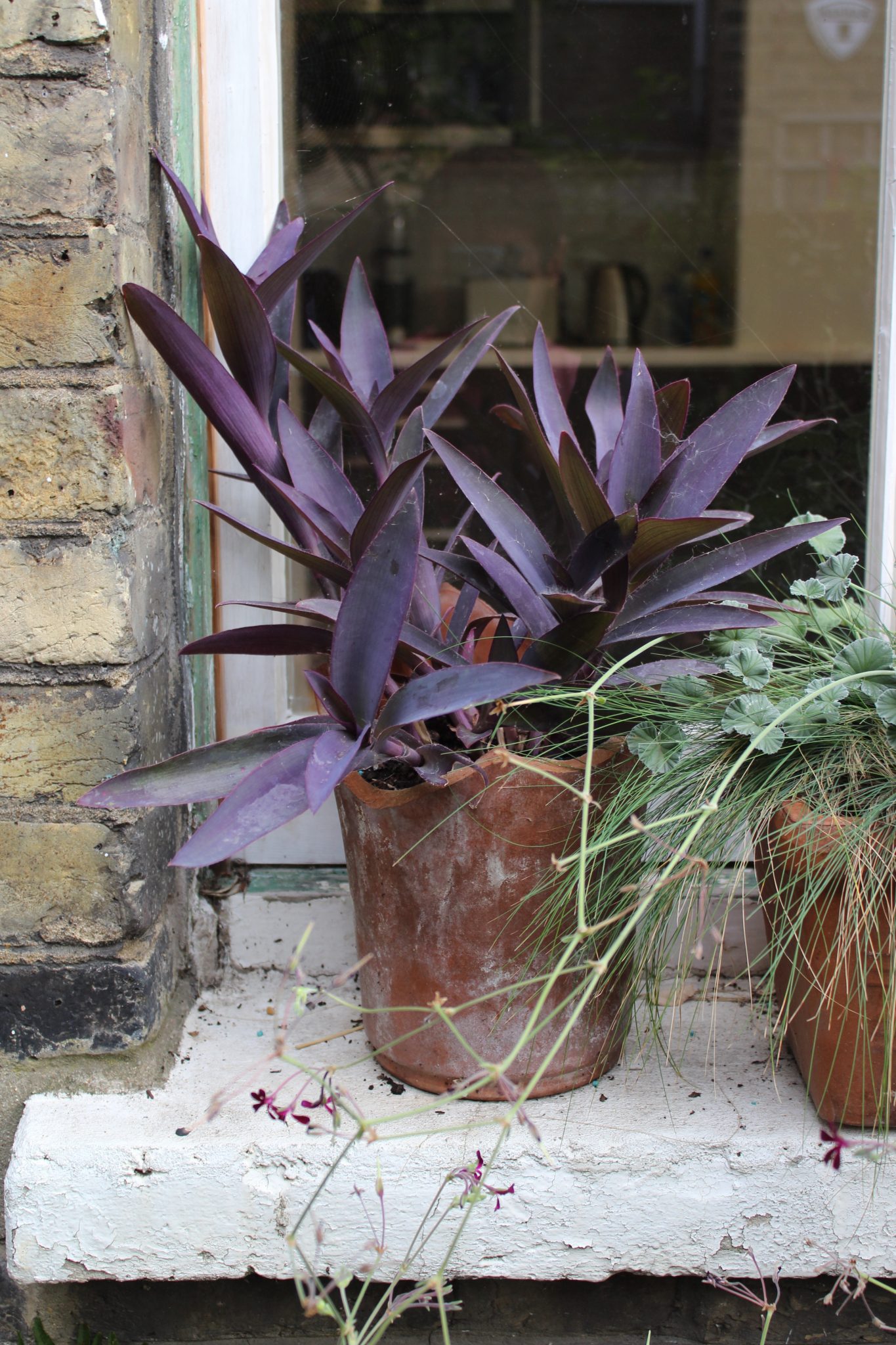 Another of our garden’s core plants from the very begninning, Tradescantia pallida did not like the freezing cold winter this year and has taken a long time to regrow. Normally by now it’s making attempts to take over the garden. Still, its petite form this year has given a lovely upright architectural sha-pow when it’s usually a floppy octopus. Full sun, not really hardy but we get away with it in London. Lovely little pink flowers from time to time. 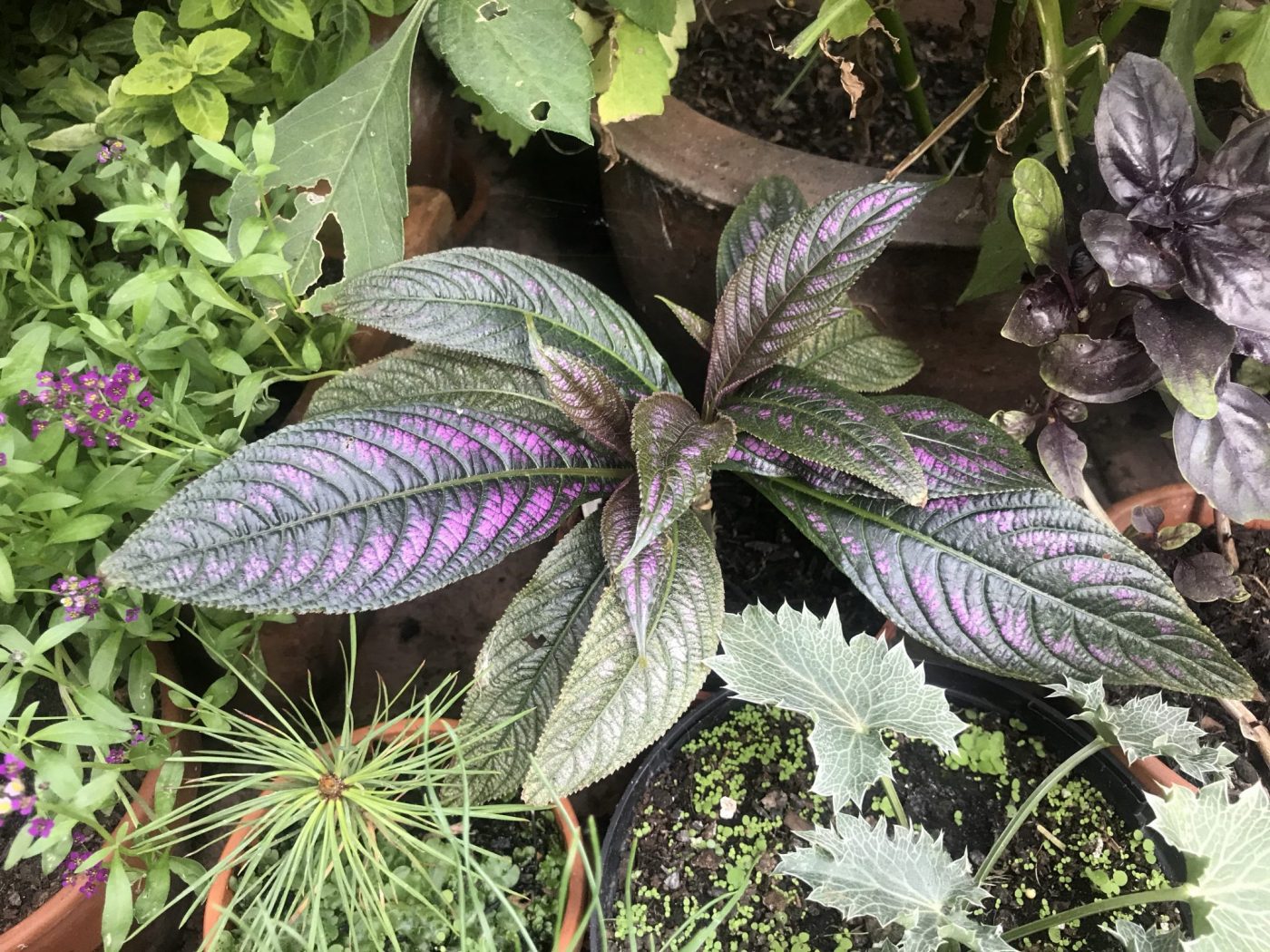 Our tiny Strobilanthes dyeriana grown at the Salutation used to be a common houseplant and it’s one I’ve been after for years. No where seemed to sell it, even trusty eBay. I now have it and it’s been enjoying life in the garden over summer growing very slowly. Now it has some colour people were asking what it was while I struggled to remember Strobilanthes dyeriana and its Persian Shield name. I’ll bring it in over winter and hope it survives. 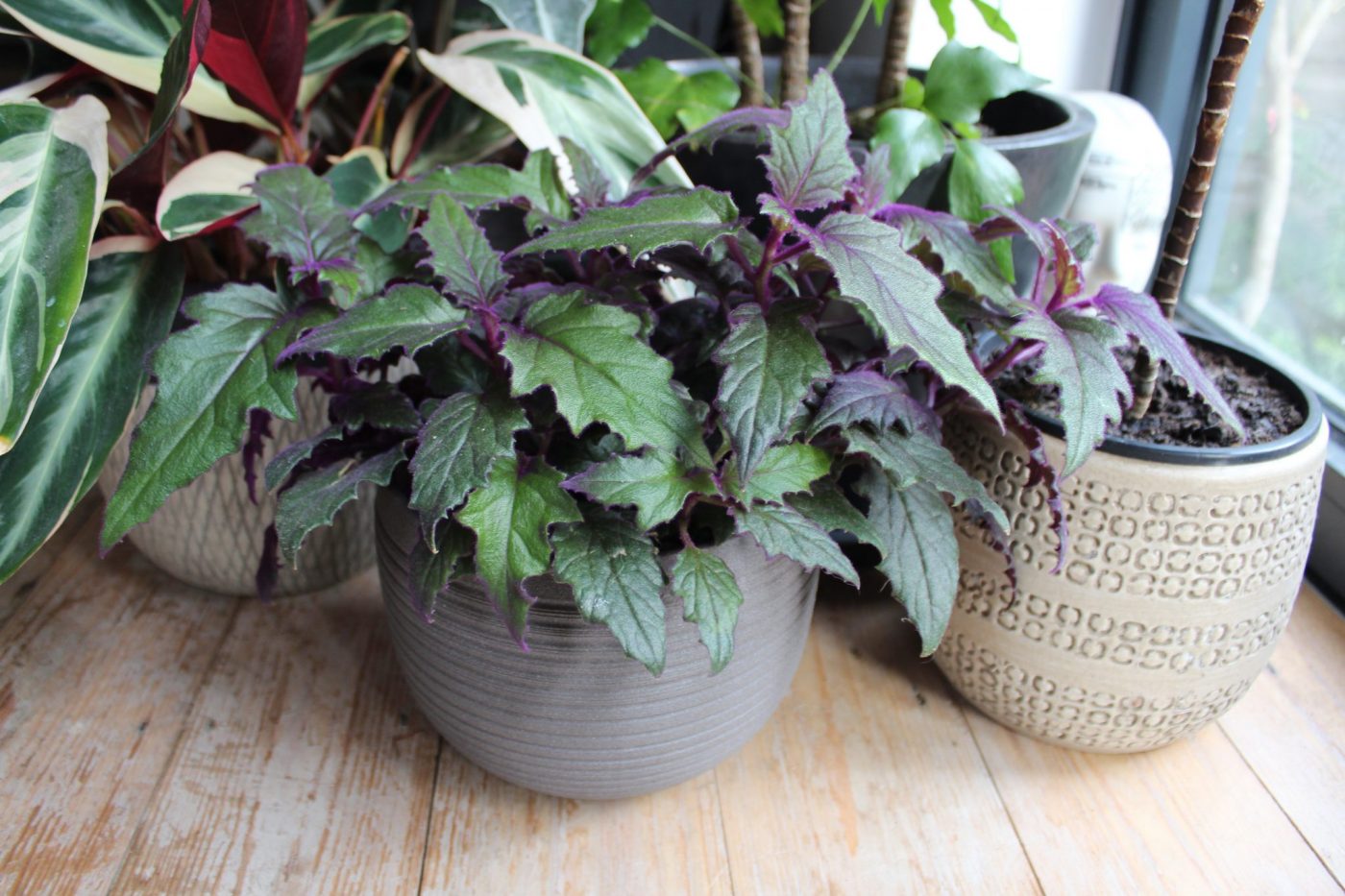 Another of my “desperately wanted it” houseplants from the 80s is Gynura aurantiaca, nicknamed Purple Passion (hang on… am I stuck in the 80s?!) My photos look blurry but they’re in focus, it’s the fuzzy purple hairs that make it glow purple in the sunshine. It’s beautiful and I’m so happy to have found it this year. Isn’t it amazing how bad the indoor plant selection in the UK had become? It’s gradually getting better. 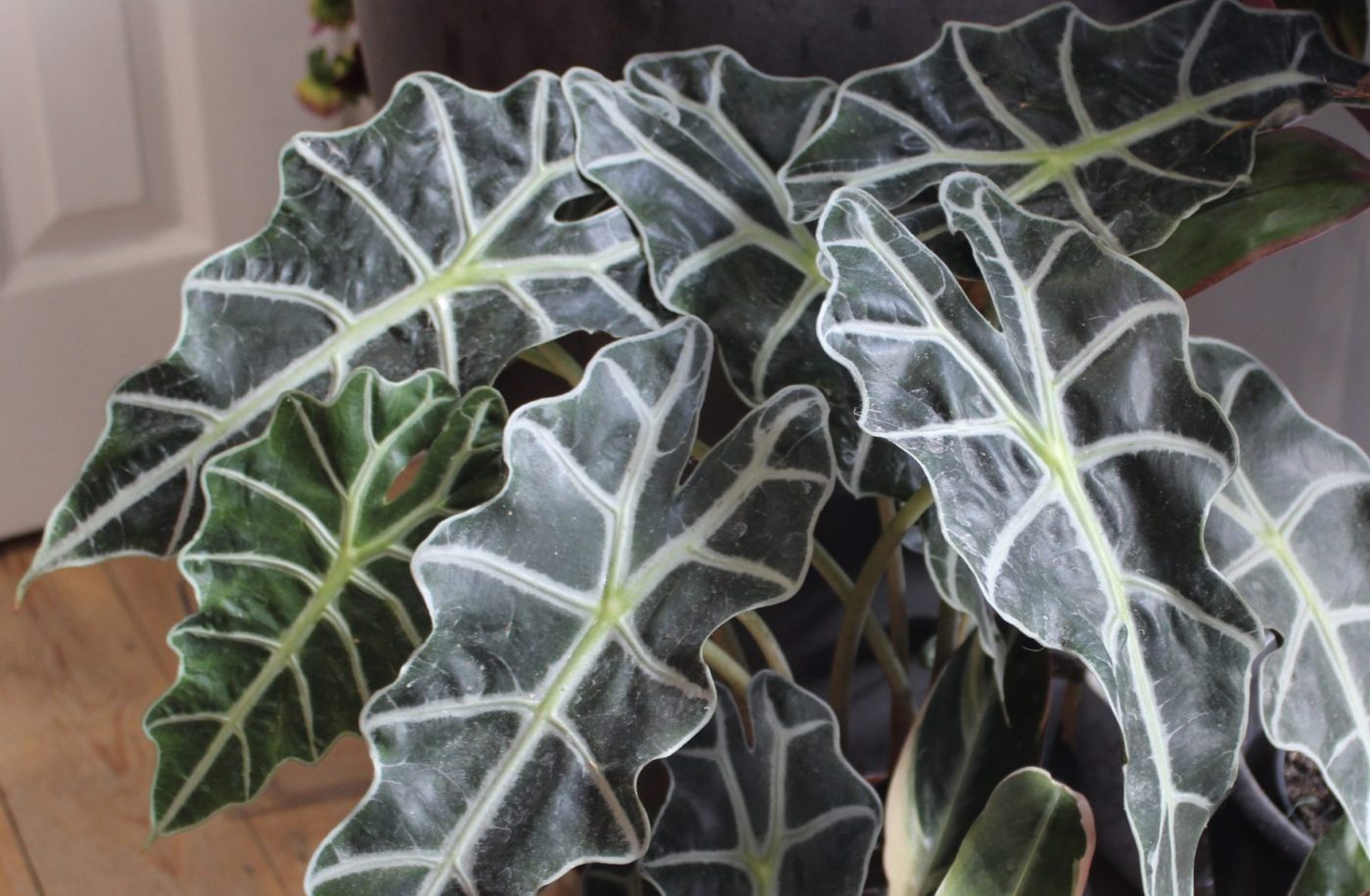 I had heard that Alocasia x amazonica was a tricky customer but so far I’ve had a good amount of success. It’s grown new leaves and flowered without the old leaves going crispy (my main worry). 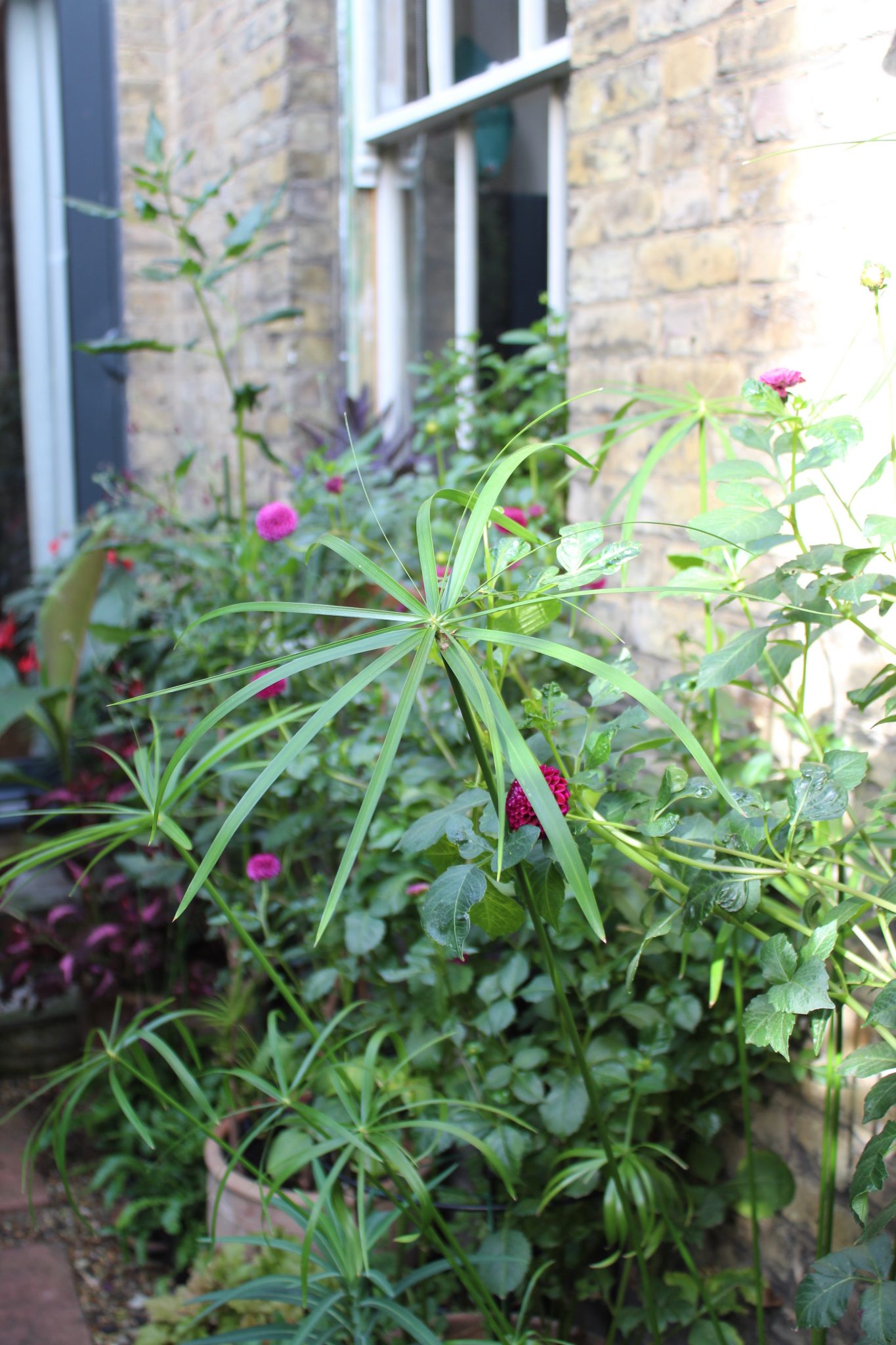 I was asked what Cyperus involucratus was and had a total mind blank, which was incredibly annoying because it’s one of my default marginal plants in RHS exams. I’m getting forgetful. What I haven’t forgotten is how cool a plant it is. If you could invent a plant found in alien swamps, this would be one of them! 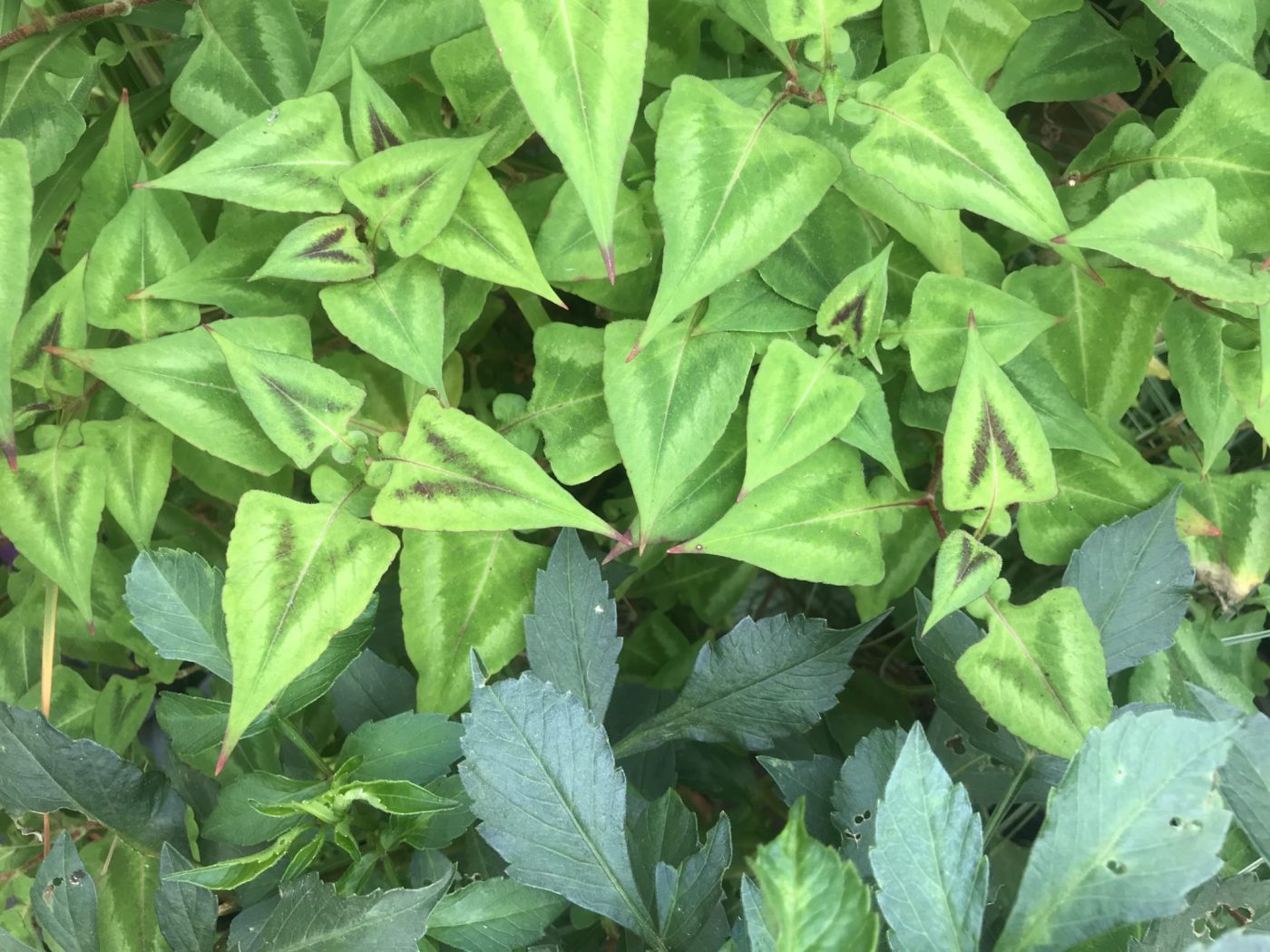 As the summer goes on, without good feeding Persicaria runcinata ‘Purple Fantasy’ starts to lose the blackness of the chevrons on the leaves, as you can see above. However, I started feeding it again properly in the last week and you can see the colour coming back to it. Even without them people were asking about it a lot at our open day. 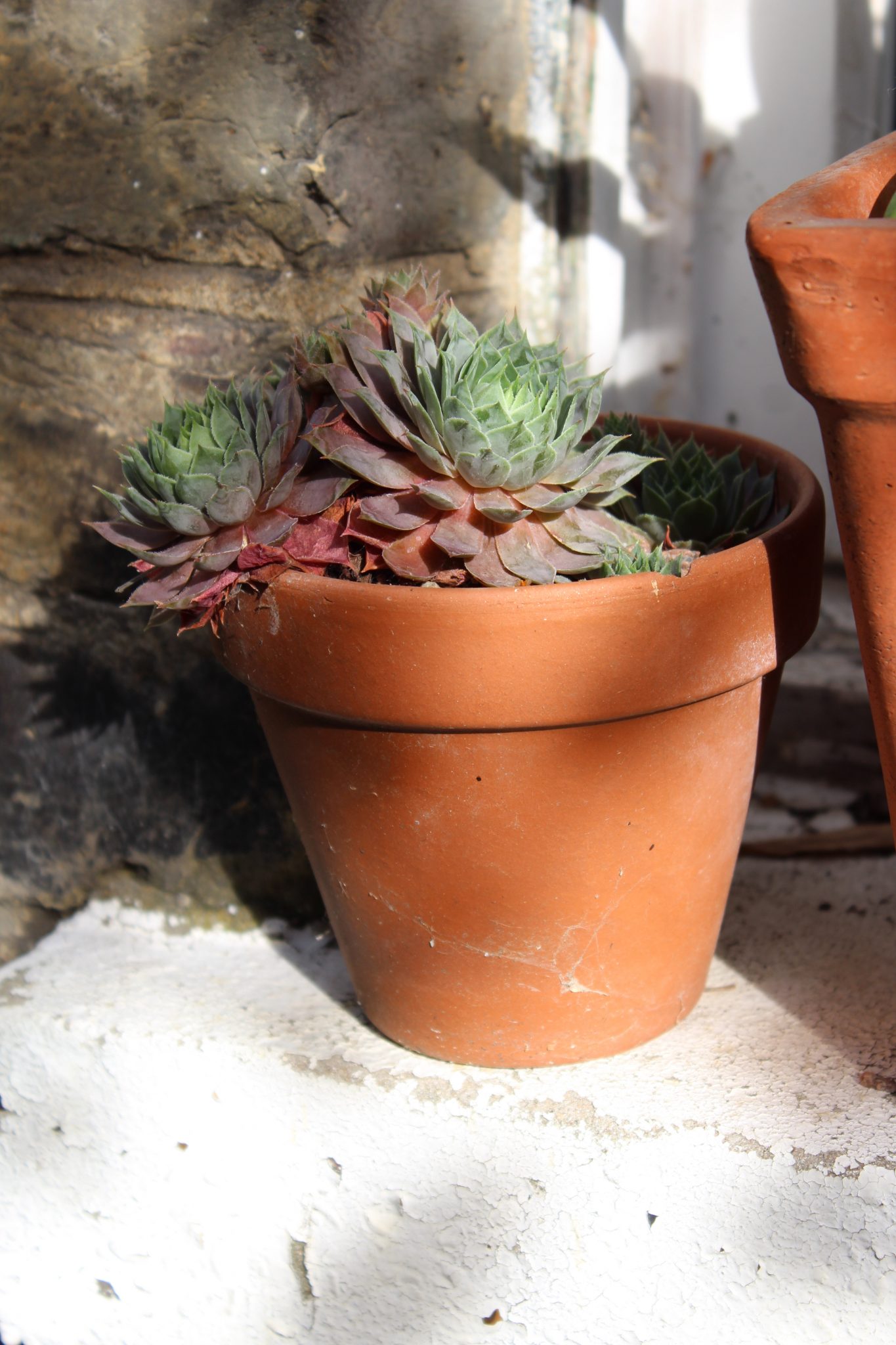 I love succulent plants and grow quite a large number indoors and out, including a variety of sempervivum. ‘Brock’ is a lovely cultivar with dusky dark purple black leaves that change colour through the year. I’ve found they love living in clay pots largely filled with horticultural grit and a little compost. 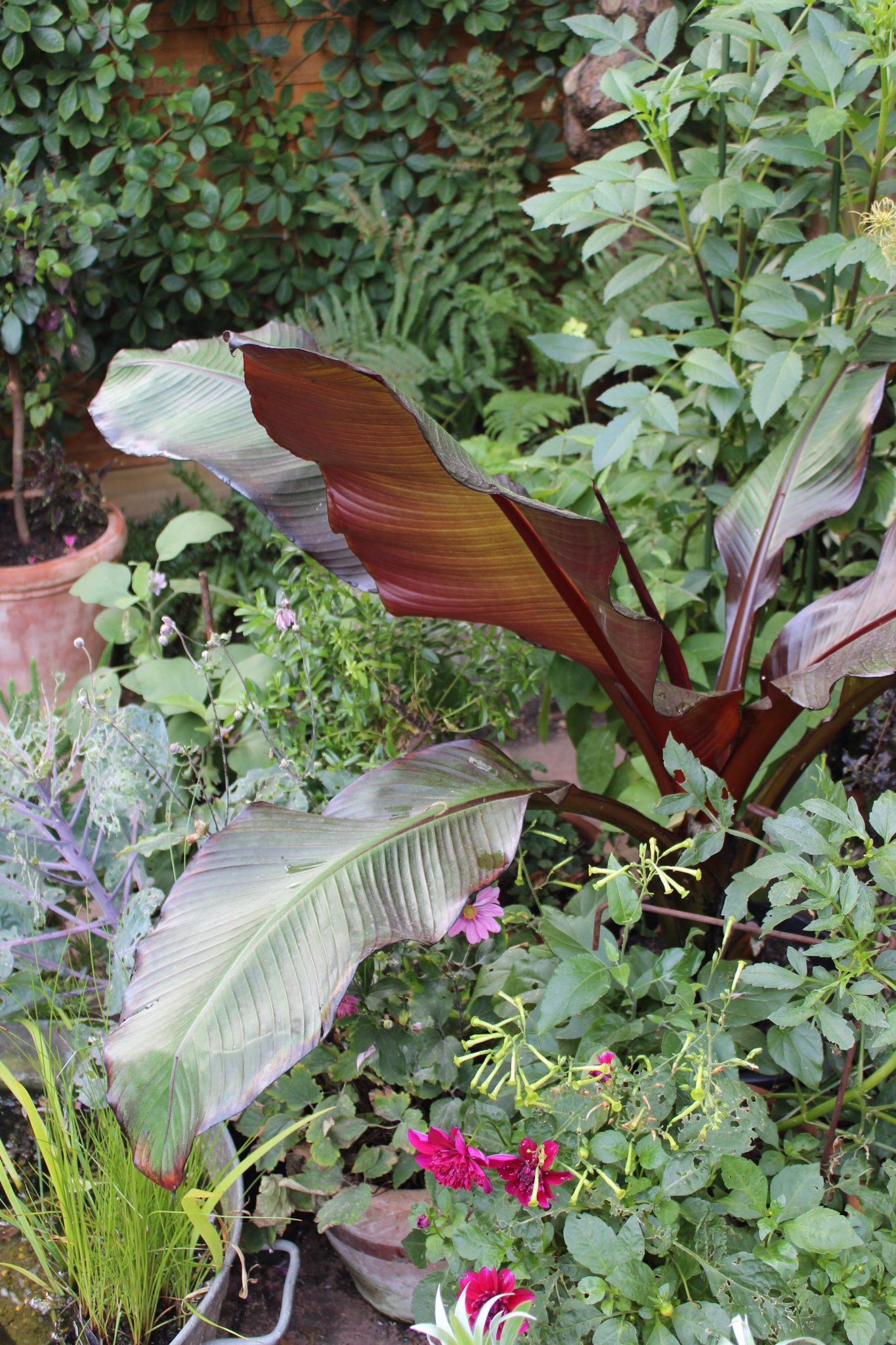 Fans of Gardener’s World will recognise this one from Monty Don’s garden. Ensete ventricosum ‘Maurelii’ is a very fast growing banana plant that needs lots of fertiliser and also protection from frosts in winter, preferably in a greenhouse but a shed will do (I know because that’s what I do!)

Putting it all together

That’s a small selection of the most talked about foliage plants at our open days this year – it’s lovely to talk about them and why people do and don’t like something. I love that personal choice and why we all have different taste. Our garden isn’t a design, it’s a playground of curiosities and silliness.

It’s interesting when plants grow together, mingling and merging – living entities from all across our planet. They become greater than the sum of their parts and it’s our job as gardener to ensure they each still get some limelight. I look at our garden and it’s so close to how I want it now with foliage playing an absolutely pivotal role in that. In about a week all of the dahlias really are going to pop and demand that centre stage back however…

5 thoughts on “Pot’s Growing On: addicted to crazy leaves”