Finally, after many years, today I came up close and personal with one of my favourite plants growing and flowering in the wild: Pulsatilla vulgaris. It was overcast and rainy, and I was a bit early in the season, so many flower buds were only beginning to emerge. Yet some were open allowing me to see the flowers at every stage and it was a remarkable sight. 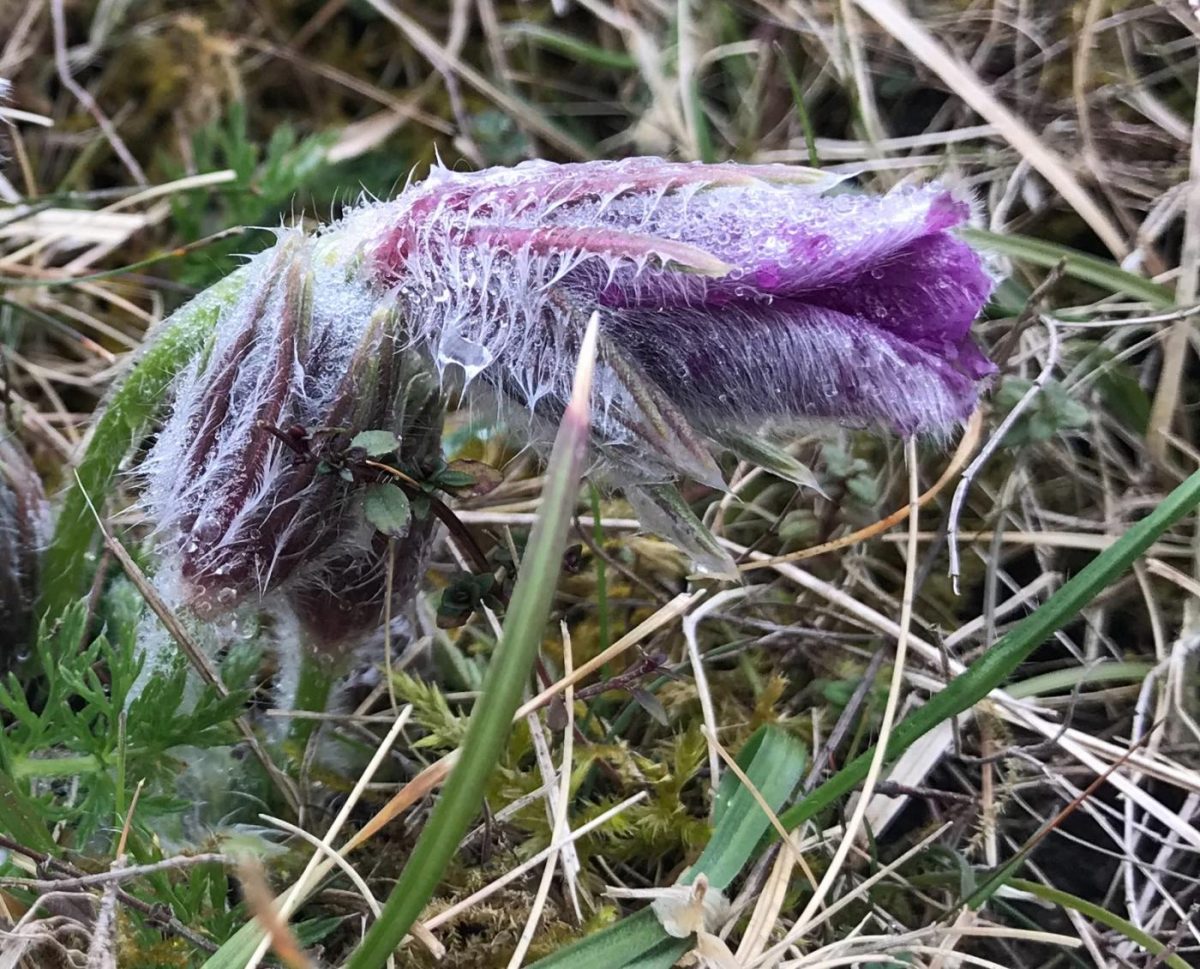 Pulsatilla vulgaris is a plant that looks like it arrived from the planet Zog. Silver hairs all over it set against deep purple petals. As the flowers emerge you can imagine them turning to look at you to say in a baritone voice “ooh, hey there”. The foliage forms a rosette of bipinnate furry leaves that is small in comparison to the size of the flowers and seed heads. 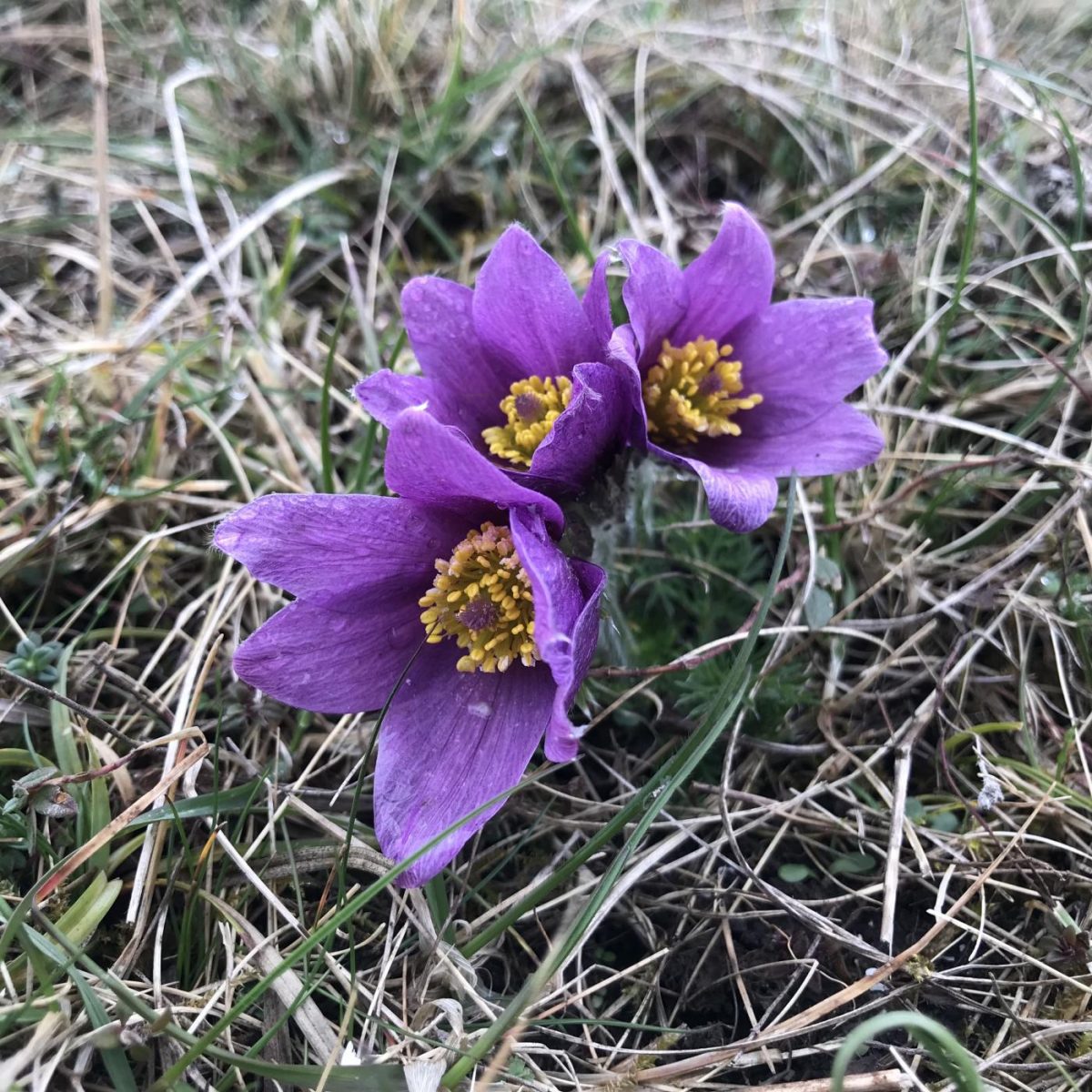 Despite the extraordinary look, this tiny plant is native to the UK and Western Europe. At home in short turf on our very sunny, dry slopes with shallow calcareous soil, usually on chalk. Fairly rare habitat. 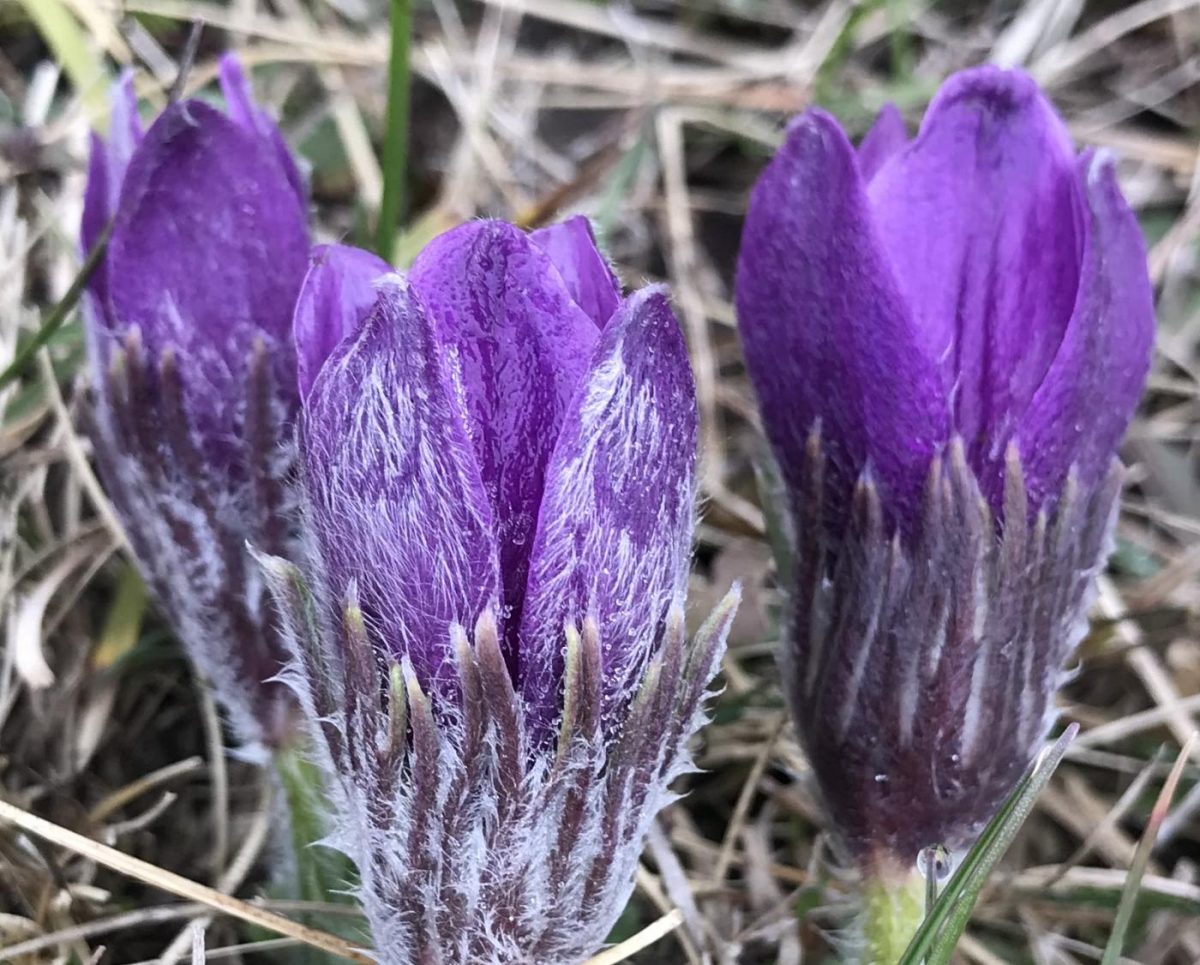 Something of a fascination to me, I first heard of Pulsatilla vulgaris in 2014 when I started studying with the Royal Botanic Garden Edinburgh (RBGE). RBGE being particularly focussed on rock garden and alpine plants, celebrating their robust nature with outstanding collections. P. vulgaris was one of the key plants they encouraged us to learn for alpine / rock gardens. So I memorised it having never seen it until two years later there it was at RHS Harlow Carr. I fell in love immediately and wanted to see it wild. 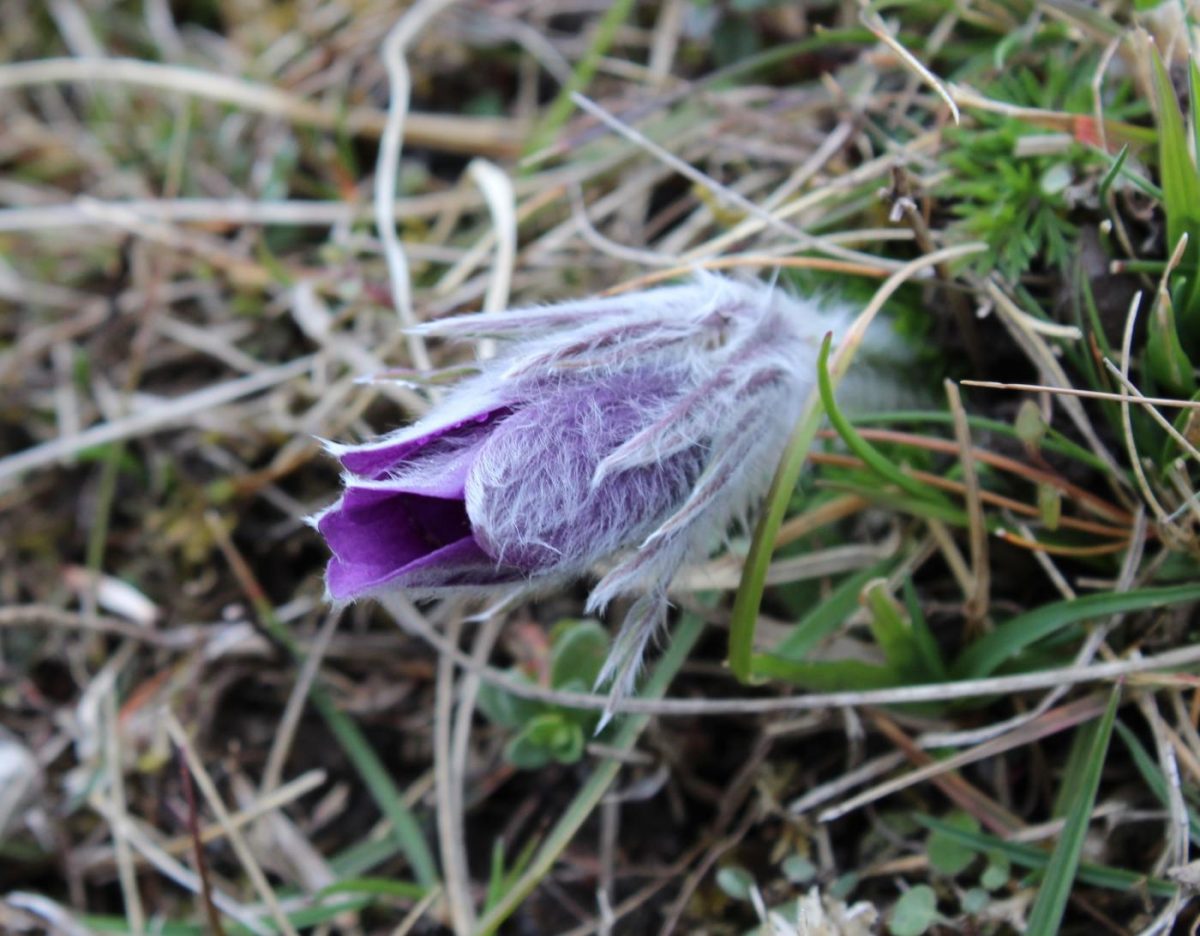 It’s now so rare in the UK that you really have to hunt it out. Where it still grows however it forms strong little colonies. The site I was at today had many hundreds of buds visible in the grass sward. Easter is when the plant usually flowers (leading to its common name, the Pasque Flower) but Easter is quite early this year and of course, the late March snow has delayed spring slightly so the flowers are out of sync with our holiday. 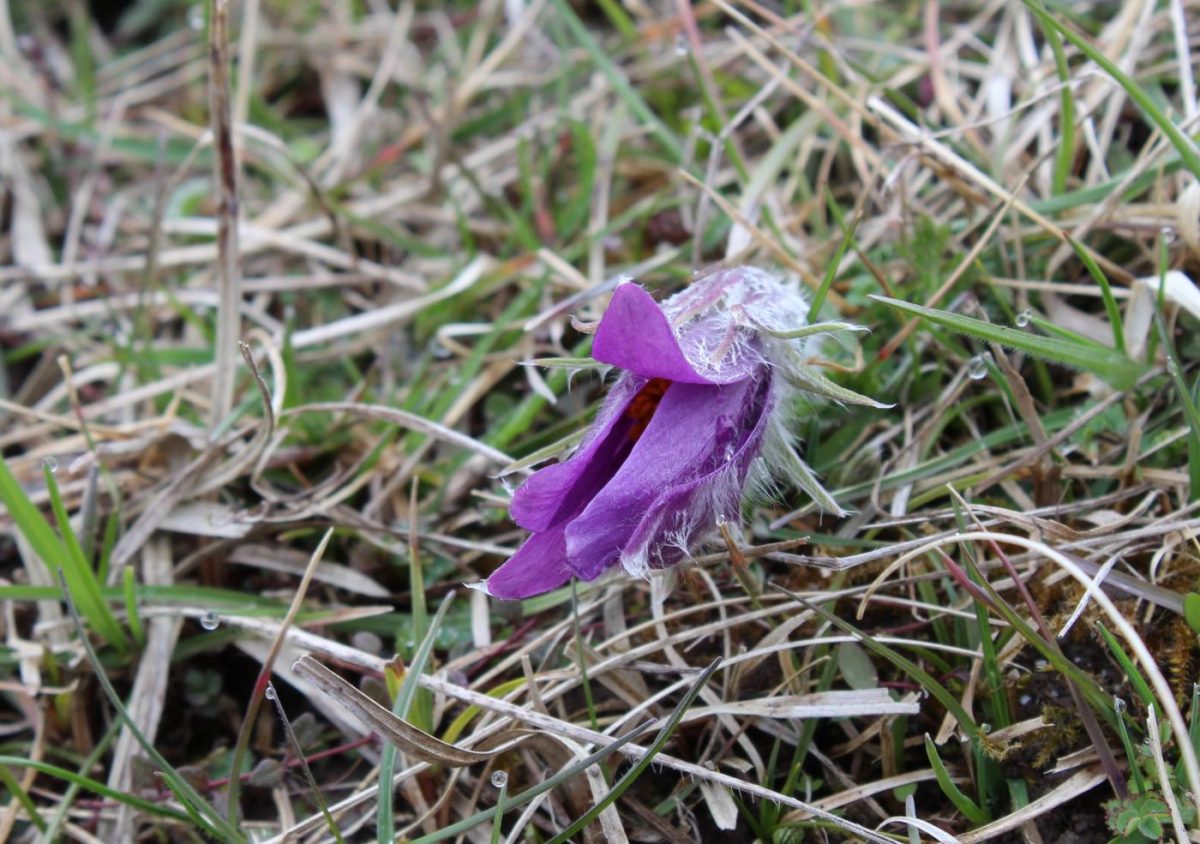 Seeing plants growing naturally for the first time is always a personal moment of reflection for me, which is why I usually go alone. To have space to think and take everything in. For the first time I really noticed the central stigma, bright purple against the golden anthers to match the petals. 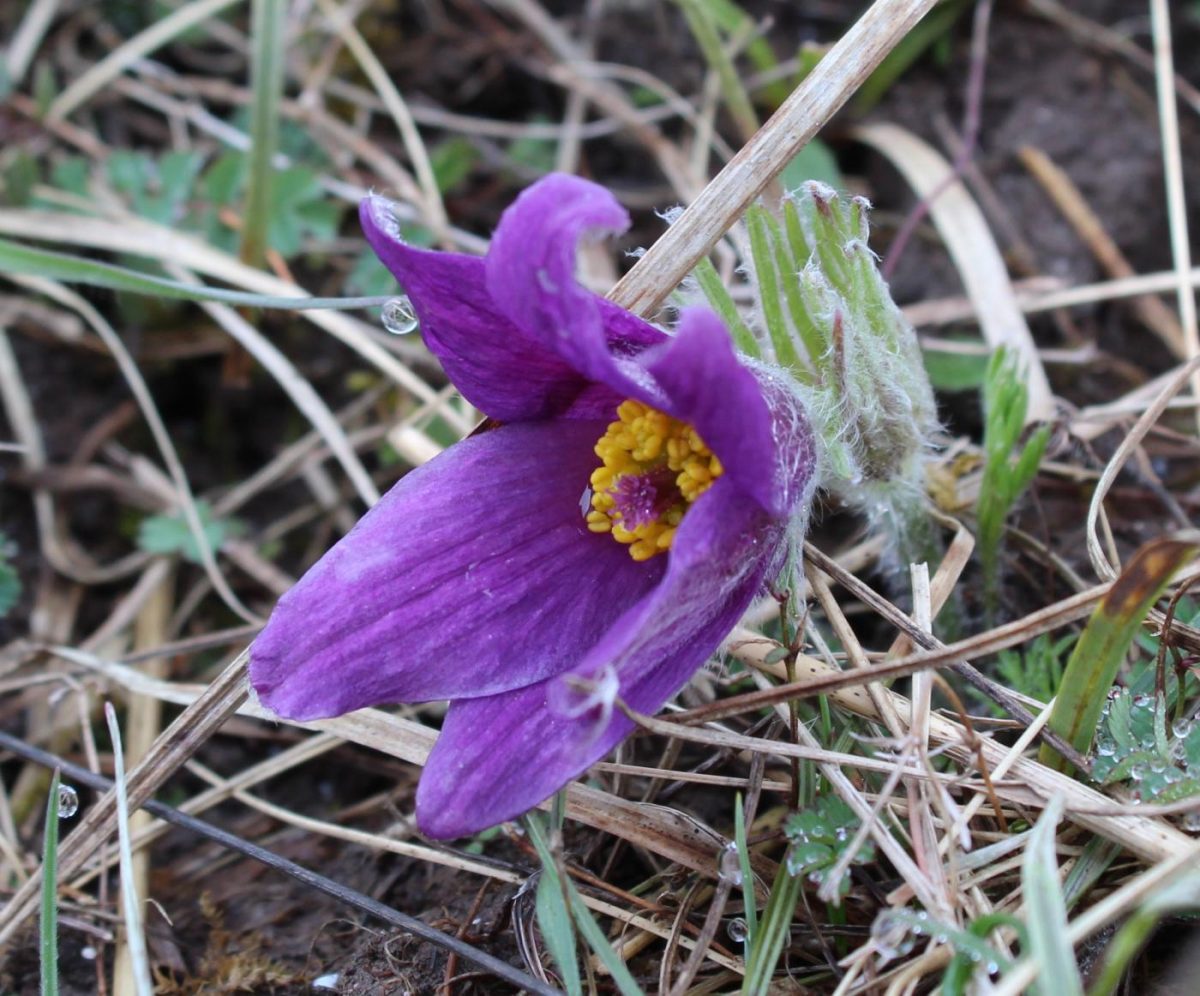 The more you get to know the UK’s rarest plants, the more you realise how strange and wonder-filled our countryside must have looked before humanity plodded around eradicating most of it. Leaving but tiny pockets. And as I always say, who knows what plants and animals humanity has extinguished without us even knowing about them.

Hopefully I’ll get to pop back to see the colony in full flower and I’ll try to return for their second display. This is one plant where the seed heads could be argued are as or more impressive than the flowers themselves. These days I add Pulsatilla vulgaris to many of my designs as a plant I love for its colour and structure, its ability to self-seed and because it is quite a personal plant to me.

To see the seed heads at full effect, one of the best displays I’ve seen is en masse at RHS Wisley just behind the glasshouse, shown in my photo from April 2017 above.

I try not to overthink cycles and seasons, it’s easy to read too much into the meaning of a plant flowering coincidentally bang on an important religious holiday for instance. As I discussed with a fellow wildlife enthusiast on the hillside today however, it was certainly handy for a productive use of the bank holiday. Thankfully I made it home for a cuppa just before the heavens opened – the hairy Pulsatillas still out there looking even more like a bunch of wet purple dogs. Happy Easter everyone!