I had a rare day to myself on Sunday and I used it to wander around one of my favourite wild areas and to spend time on my allotment.  In any season of the year, taking time to reconnect with the natural world is positive time well spent. It makes you aware of the changes to come, a blueprint for future months. Walking about in late October it was interesting to note how many wild plants are still in flower and indeed, how lush some plants like nettle and cow parsley seedlings are. It’s not just my Dahlias then; weeds are still able to make the most of autumn’s last warm moments. 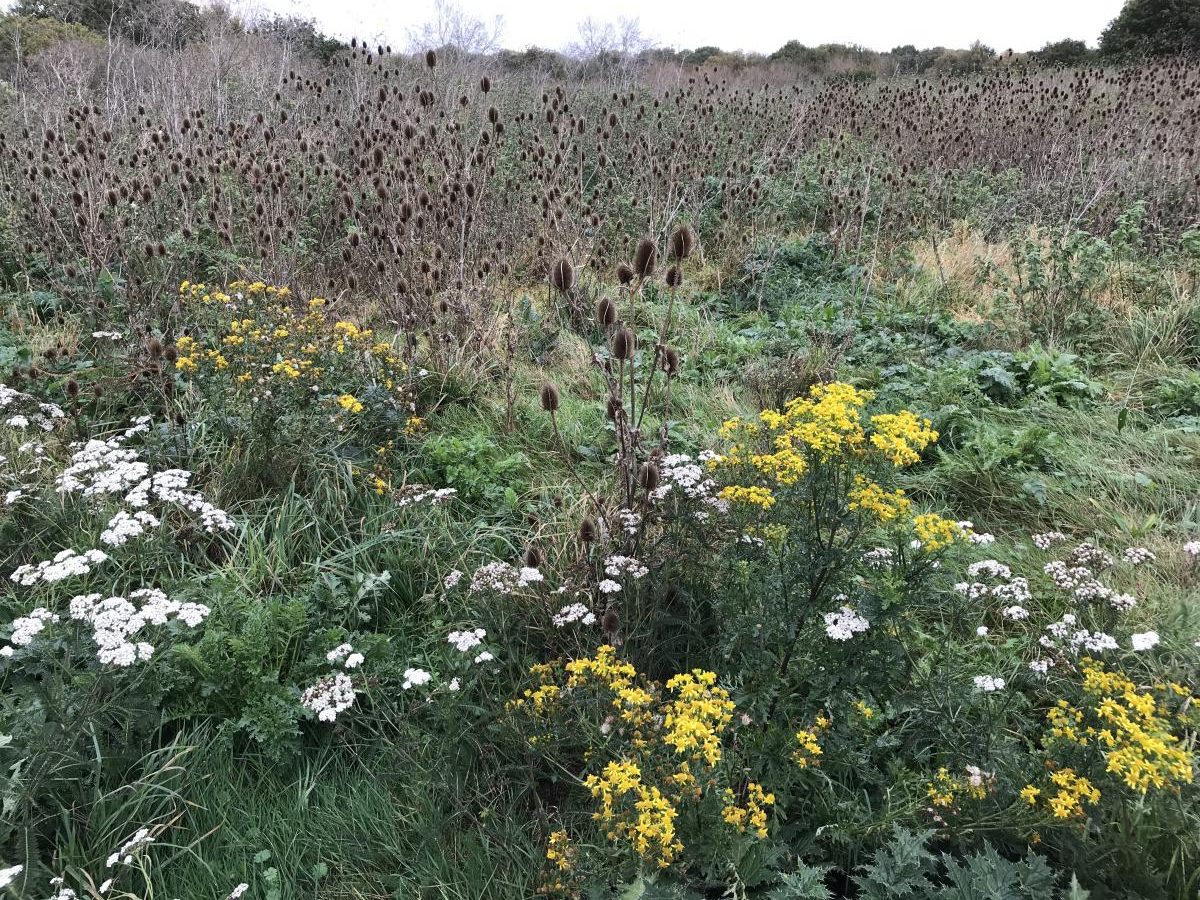 The sense of nature closing down for the coming winter is impossible to deny though. Silver of dead plants, dry and bare. Their bones standing upright among the mix of yellows and browns. I thought to myself: how lucky we humans are. In warm houses and clothes made thanks to our clever brains. All enabling us to witness in comfort the changes brought on the land by the harsh of winter. Every living thing is affected but us. The lone watchers of the world, walking over the ground slightly removed from the life around us yet able to interact with it. 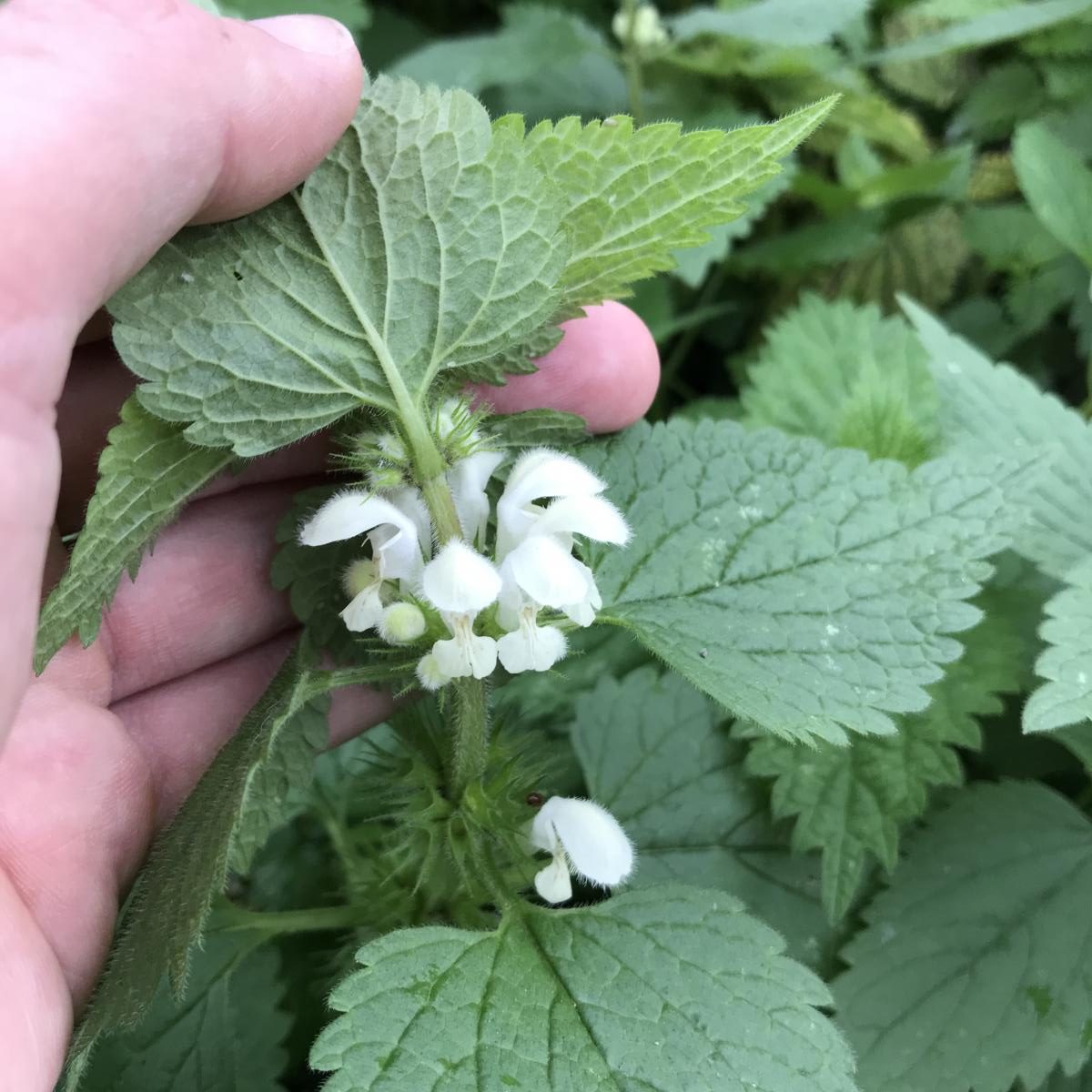 I regularly find myself wanting to be more closely connected to that ecosystem, to feel part of that change in season. It’s comforting. I’m not the only one to feel that way, my friend Hannah Morrish and I were chatting about this and ended up referring back to Lia Leendertz’s new Almanac helping educate thousands on various natural cycles of the year. 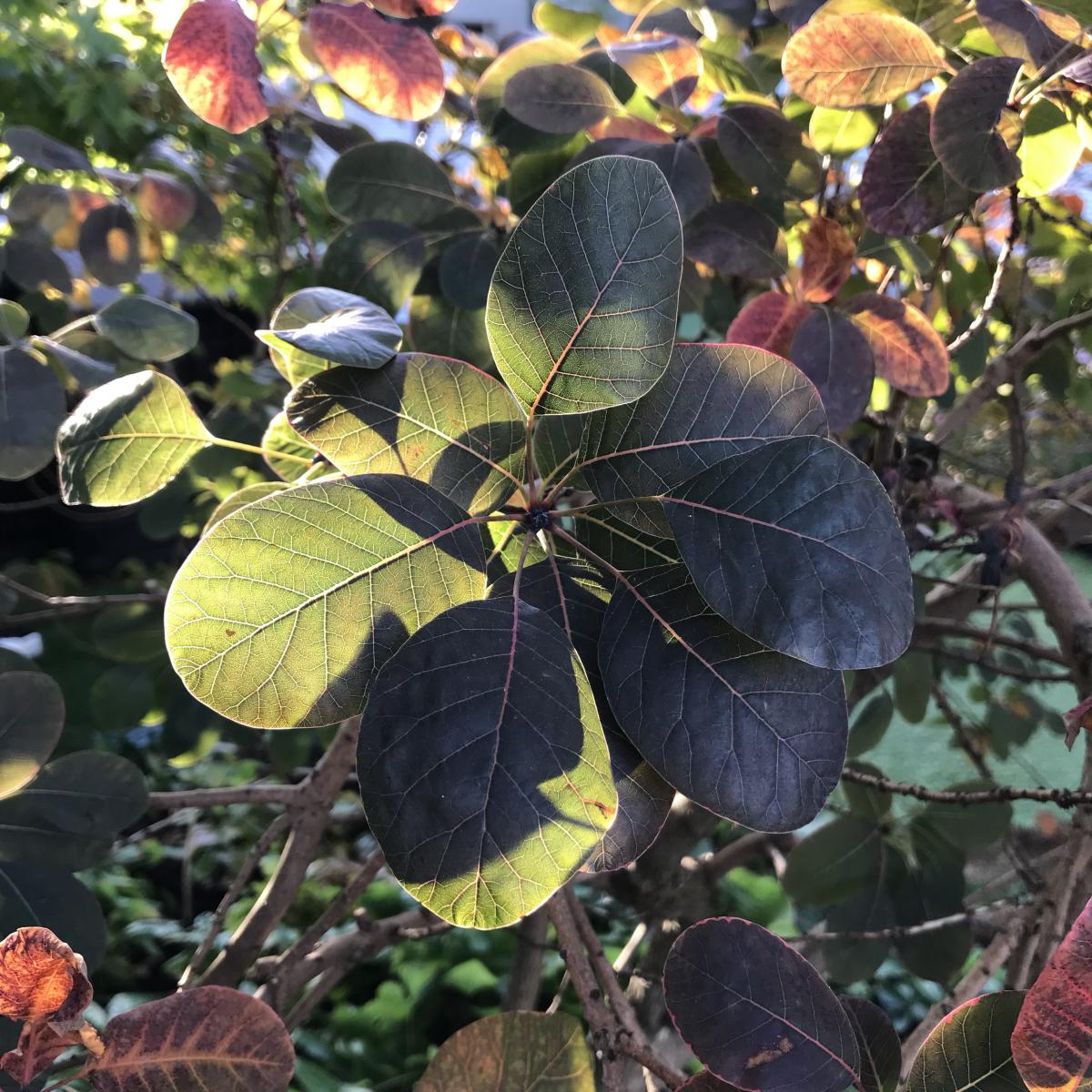 Gardening allows us to do exactly this – become part of nature’s ebb and flow – because everything we do is controlled by the seasons. My allotment brings me closer than most other things to the earth and the life on it. Spring flowers open on dewy days, rhubarb pushes through the frozen ground, then asparagus and peas and beans, followed by fruit glowing like jewels in autumn and the tough hide of brassicas bear the brunt of winter. Plants constantly germinate while others die year round. Birds come and go, insects hibernate. Fungi expand in warm wet spells, like sponges released from a fist. You learn the patterns of life.

Observing plants across the year, I’ve been returning to the same ones in the wild and where I garden. Checking the progress they make month-on-month until the point the seeds just turn ripe before dropping from the plant. I can’t stop doing this, observing change in plants, the way they grow is constantly interesting to me. 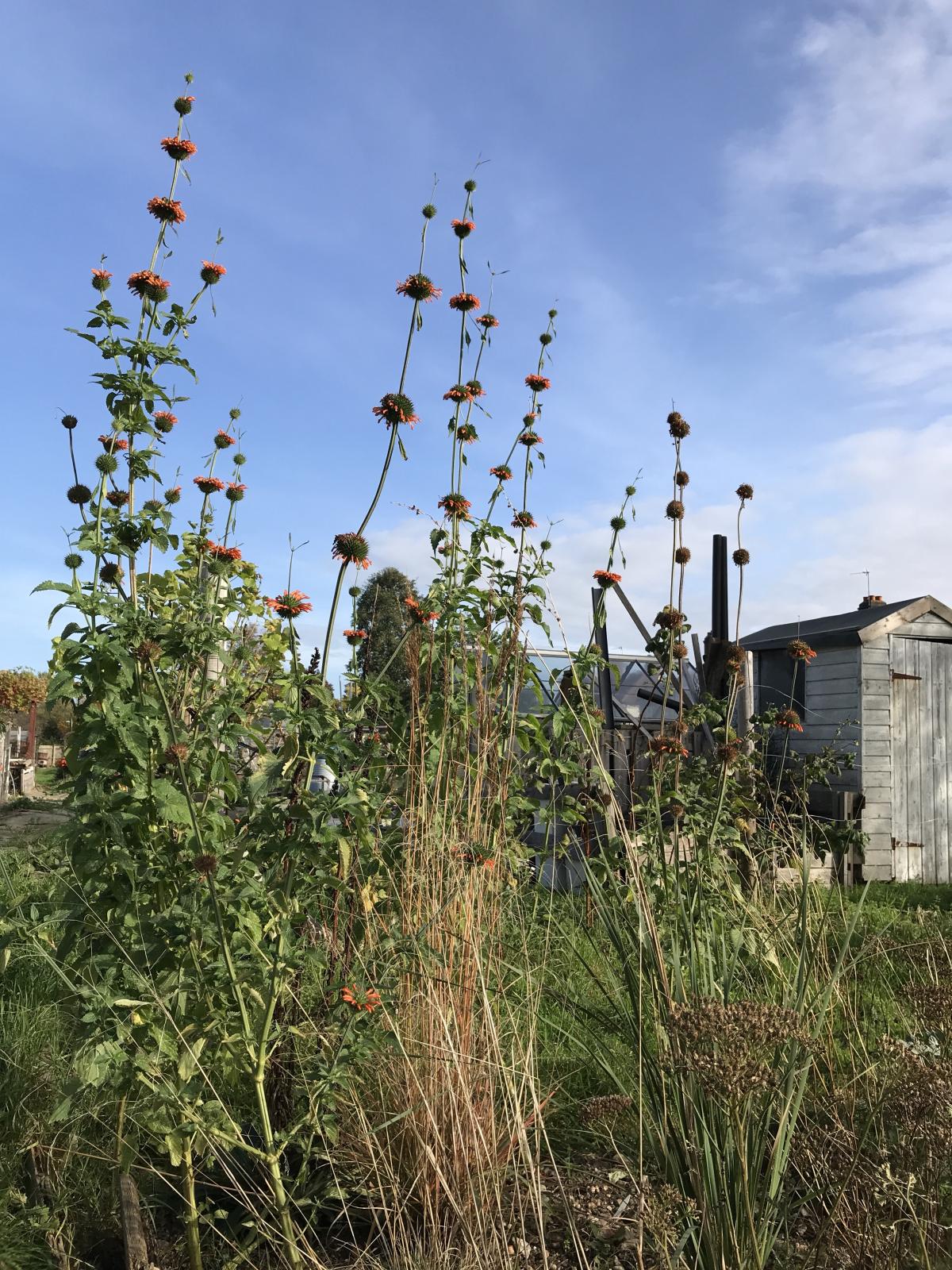 Collecting seed from my favourite plants has become a big part of what I do. It feels like a right of passage to finally be brave enough to collect and store lots of seed, to help the cycle along as one little link – a lot of this is understanding when to collect it. Part of the mental block against collecting seed is to do with the psychological reasoning that bought seed is somehow better. True in the cases of specific cultivars and F1 seed but for many plants, bought seed is no different to collected. 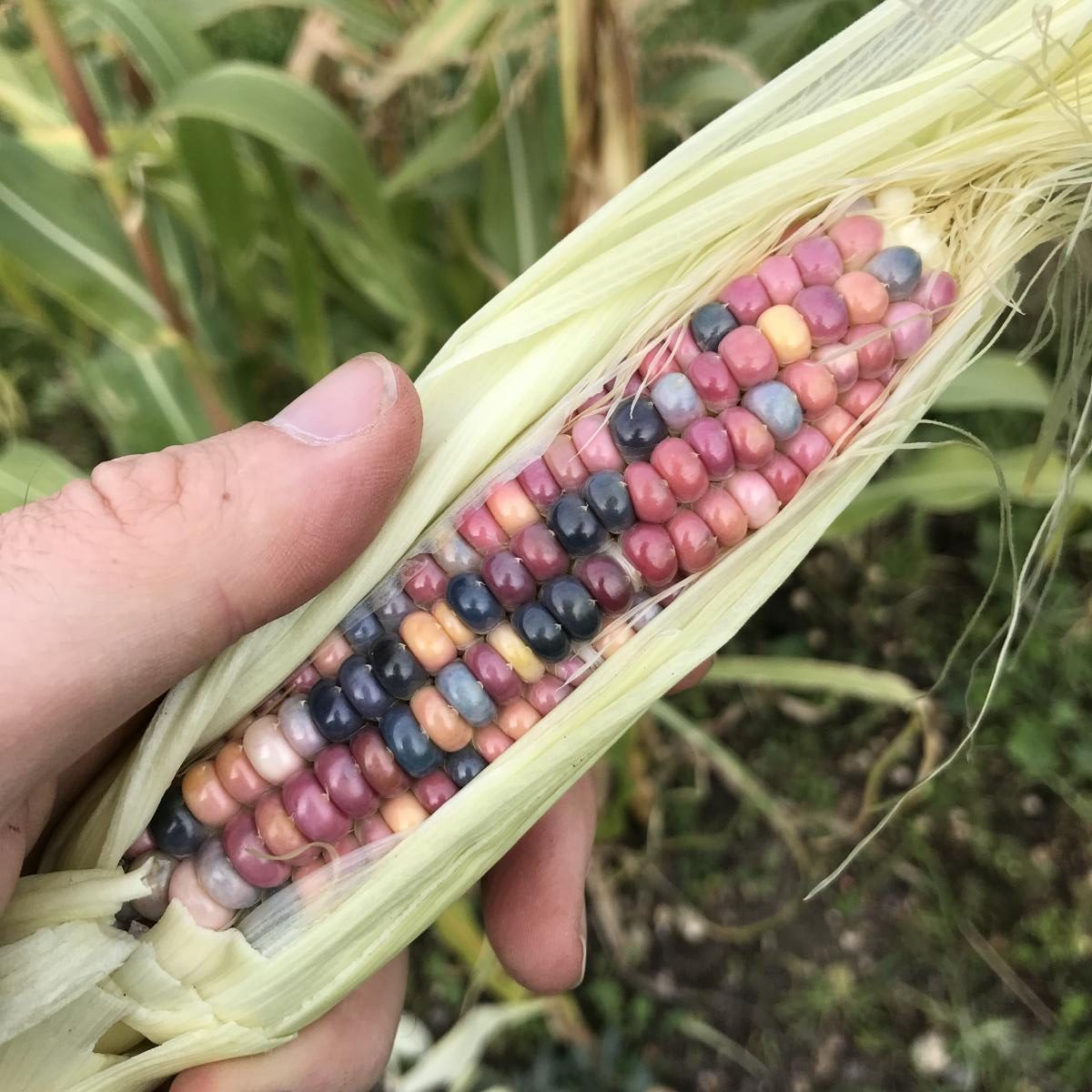 The above glass gem corn was given to me by James Robbins a fellow writer. I’ve had the multicoloured seed for over a year in a little paper bag. I treasured it because it was both exciting and a nice gesture of something he had grown and passed to me. A long time later and I’d sown the seed in pots, planted out the seedlings and watched them grow and fertilise, cobs swelling. Then one magical day you peel back and there they are, colours you hoped for but didn’t believe were possible. I was in awe that collected seed would have this result. 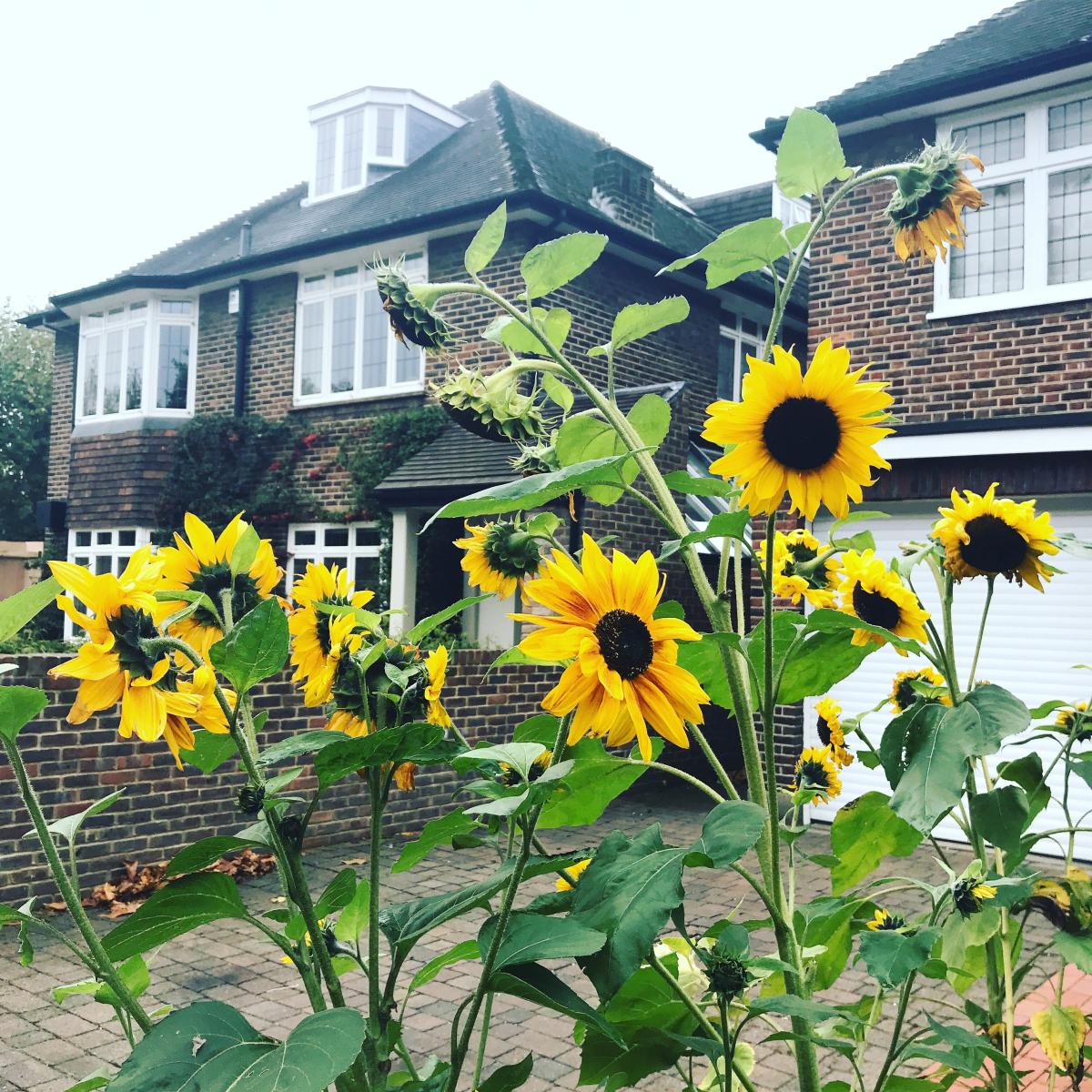 I’m now collecting seed from many different plants for next year, some being sown immediately for autumn / winter germination where they are to grow. Others for storing until spring. I now have so many Ricinus seed from three plants that to buy the same amount would set me back £20 from shops. 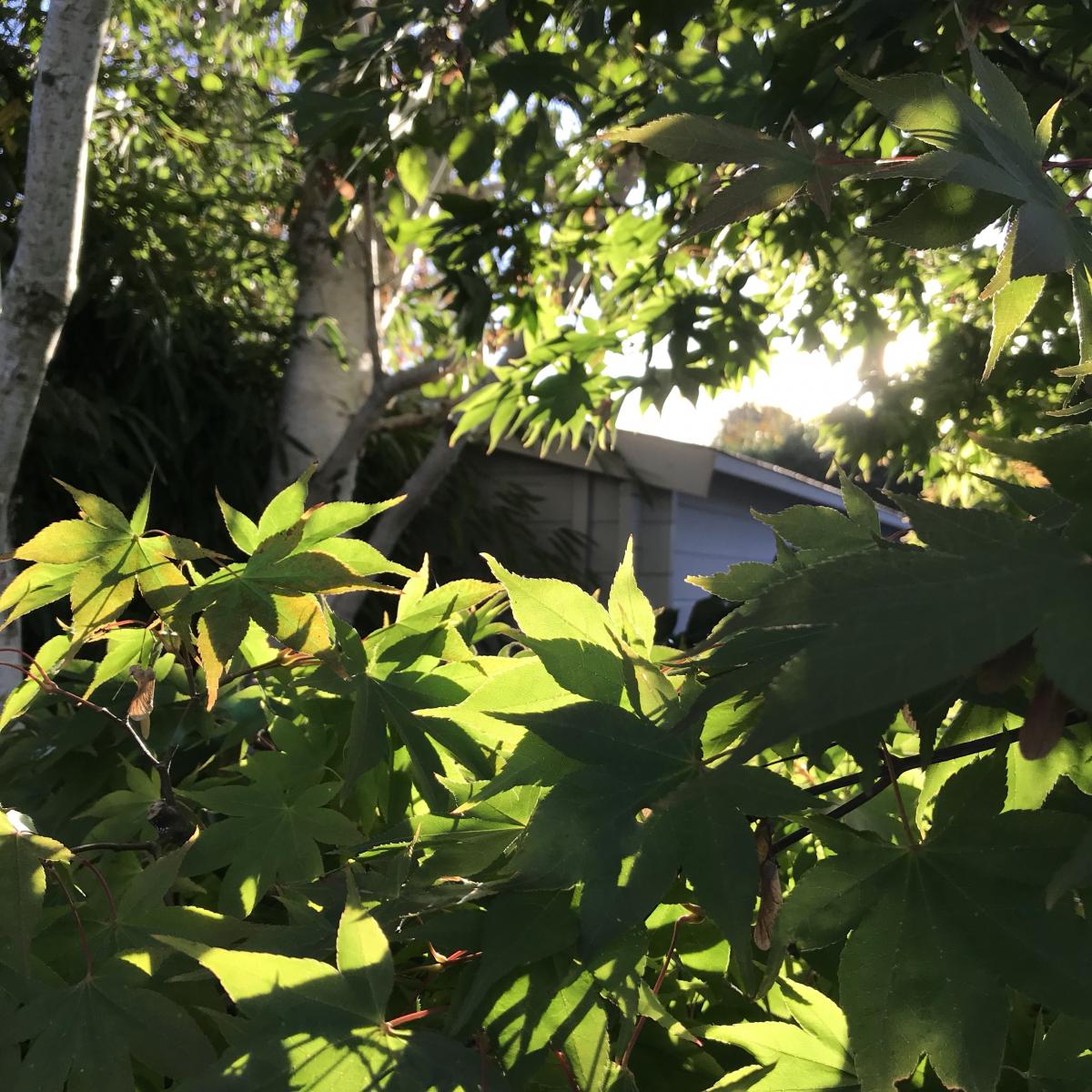 Beyond the practical cost benefits, I’m a daydreamer which is why these things appeal to me. Little stories all weaving together. When my Instagram buddy Constance Faddis used the term ‘The Great Mystery’ in reply to one of my photos this week it immediately struck a chord (not just because it’s a great name like ‘The Dark Crystal’). 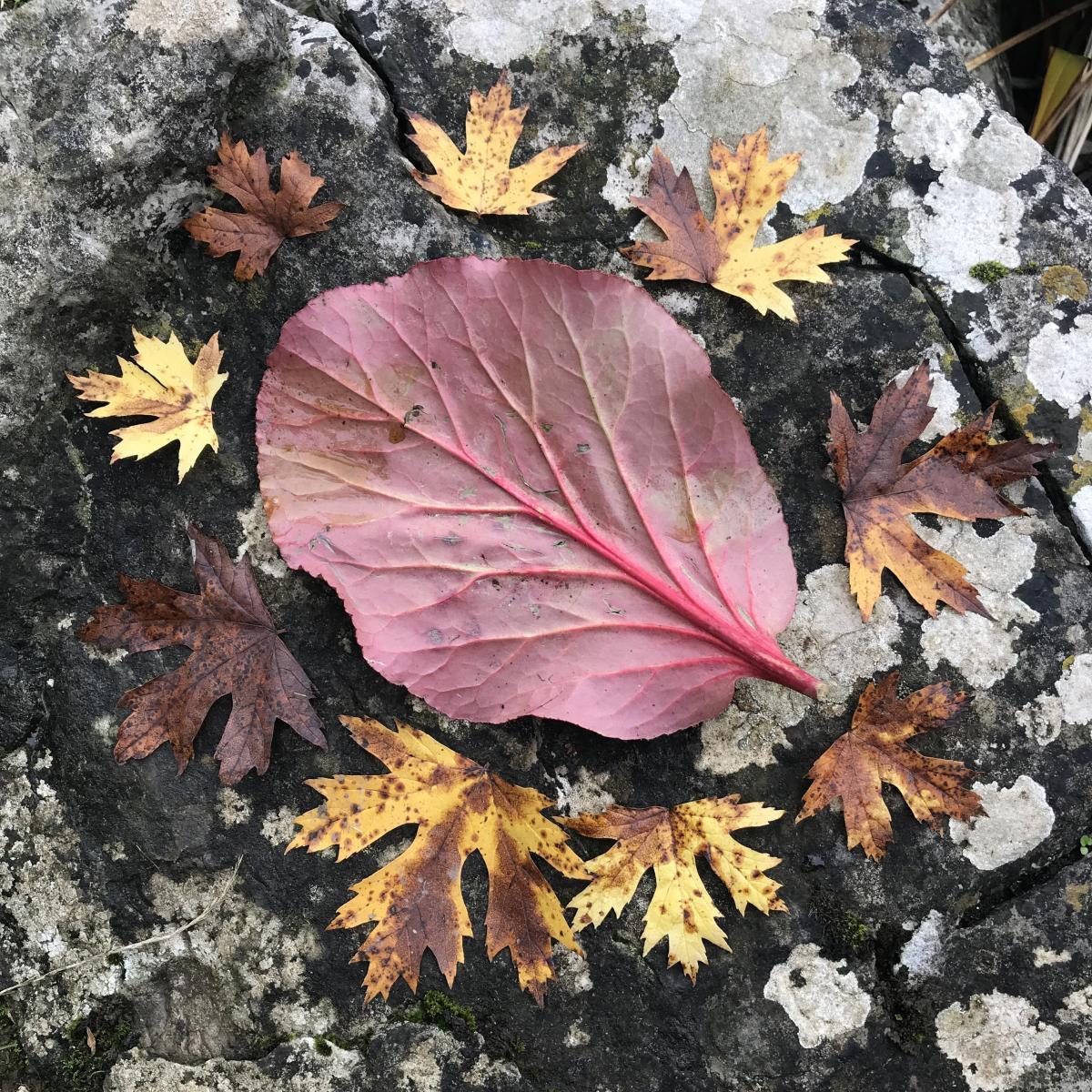 The Great Mystery is to some native American tribes their belief system (read more here) whereby every element and living thing has a spiritual energy.  I am more scientific than I am spiritual, yet when people debate science vs beliefs I often feel they’re simply talking about the same thing. The universe in its constant state of creation is awesome however you look at it – even looking through a microscope I am in awe.

It’s the change, most tangibly seen in our seasons, that help to continuously renew that sense of awe. Observing plants, collecting seeds, growing and then understanding how they work, seeing animals, birds and insects alongside them. Everything affected by wind, rain, cold, ice and eventually warmth and drought. There is so much to see and so much to learn. Realising you can never predict every outcome and finally that the world is a much bigger place than your garden or allotment… life really is The Great Mystery.