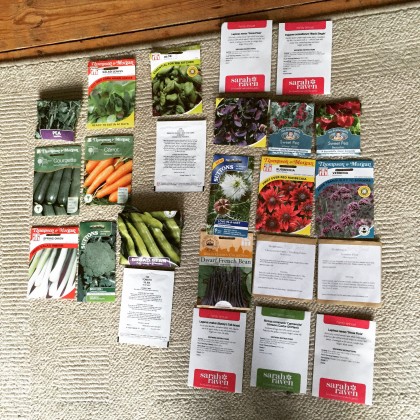 I’m not sure how but it’s almost the end of January! The weather has been very mild this winter and a few plants in Littlebury Gardens are still growing, albeit at a creeping pace. The Buddleja davidii, Sambucus nigra and Brunnera macrophylla have lost most of their old leaves but the new ones seem to be growing just fine.

Under our plum tree some Galanthus (assume nivalis) I planted without thinking 15 months ago are showing their heads and are about to flower. Disappointingly without expanding the crop – this year I’ve added lots of fertiliser granules to see if I can get them to multiply.

The large Helleborus ‘Ivory Prince’ is budding up spectacularly, as is one of the three random Hellebores I bought at the local Clapham Fayre in the summer. Out front, the three vines we have in pots – Jasminum officinale, Lonicera japonica ‘Halliana’ and Clematis x cartmanii hort. ‘Avalanche’ are acting like winter has barely happened. The Clematis in particular is now budding up, despite a year of damaged foliage and I’ve started giving it a full strength diluted potassium fertiliser.

The fruits of my planning and plotting are arriving through the post including a rather outrageous amount of seeds (some in the pic above!) I’m itching to get planting but am holding back until mid-February as a reward for focussing on and completing my RHS Level 2 exams. And because that’s the best time to plant some of them (inside) of course!

I have snuck on a batch of Solenostemon though, 15 seeds. Couldn’t help myself. Planted this week in a heated propagator. I wasn’t a big fan of Solenostemon / Coleus until I saw a display at RHS Wisely in 2014. Some of them were quite remarkable. I bought a pack of, what I think, are the most interesting plants from Thompson & Morgan.

I also took receipt this week of an Aeonium arboreum ‘Schwartzkopf’ which is supposed to be a dark purple, almost black rosetted succulent. However, the one I received from eBay (never again!!) is merely a stick with speckles of possible regrowth. Fingers crossed.

Today, prompted by an offer on Thorncroft Clematis, I also finally ordered two late flowering purple Clematis. Clematis viticella ‘Polish Spirit’ which I’ve been looking at for months and a Clematis viticella Galore Evipo032. The Galore was an impromptu purchase of a £5 offer.

Otherwise, January has purely been about revising for my first batch of RHS Level 2 exams. The knowledge is sinking in now, but blimey, the sheer volume of information to memorise is mind blowing. Whoever says horticulture and botany is easy (*cough* David Cameron *cough*) I dare to take this course and pass. It’s hugely fun and rewarding however and I’ve learnt so much ready for my 2015 gardening year.

Oh, while I remember, two amazing things have happened: i) the Buxus cuttings I planted on a whim last summer have only bloomin rooted! Thick, strong roots. I was really excited about those. Perhaps my topiary from scratch dream will one day happen. ii) I finally discovered that the cutting I nicked and planted from down the road is Muehlenbeckia axillaris (right) – I’ve been trying to find that one out for about 7 months! Loads of places sell it, but nowhere labels the flpping thing. Now I know what it is, I can plant it safely. I think it’s fairly common (though I’ve rarely seen it) and considered something akin to Ivy as a bit of a thug, but having seen it used wisely I think it’s one of the most beautiful ground cover or climbers there is.