Stepping out into our garden one morning this week was different. Not least because we had 1.2cm of rain last weekend, literally the first drop since May. While the sky was dull and gloomy, flowers were glowing, their colours making up for the lack of rays. Plants loaded with water, leaves shining with hydration. Growing significantly in the warm and now humid air. It wasn’t only the plants creating major change, us humans have too. The table that has graced our garden for four years has left the building. 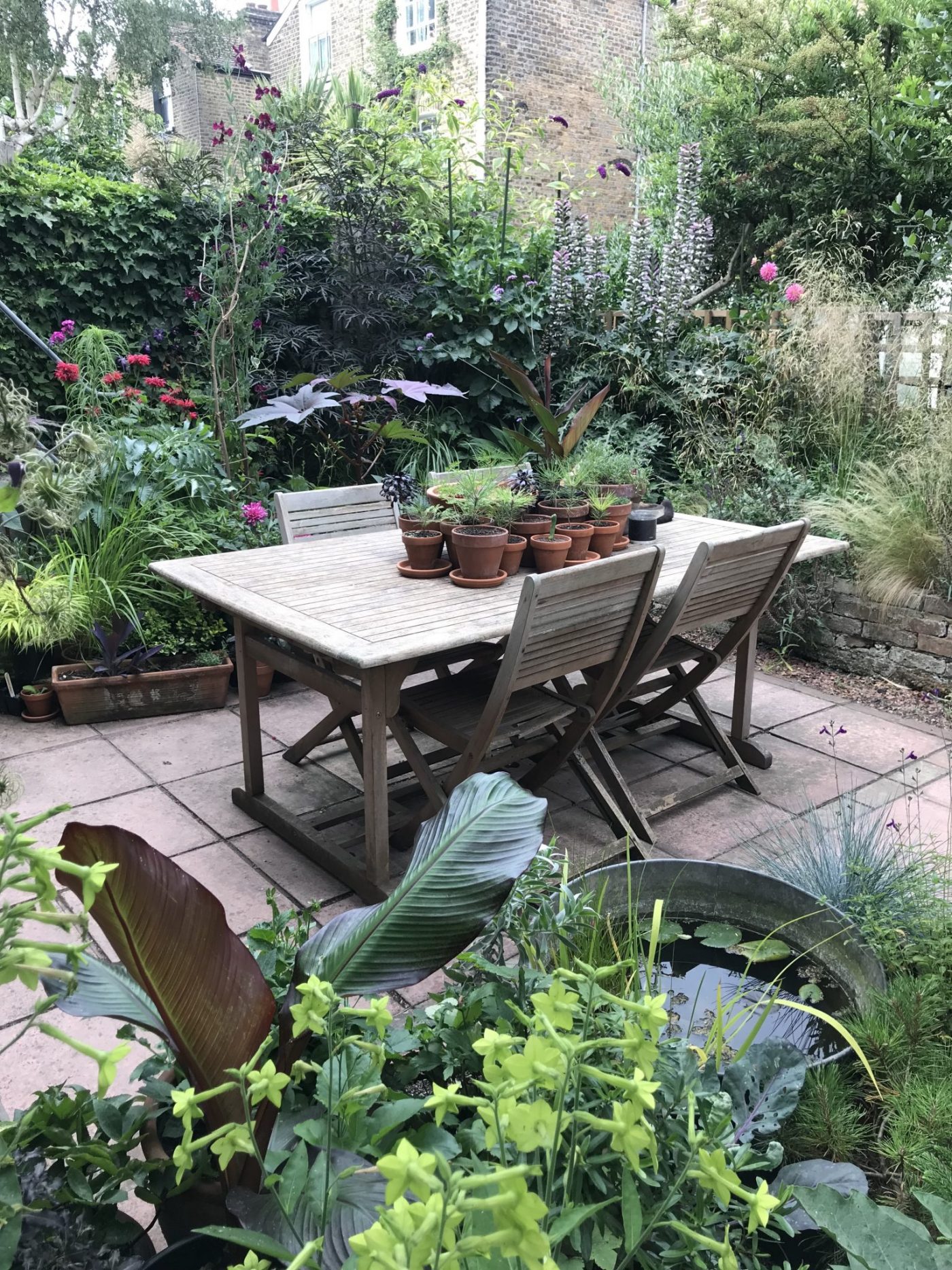 I’ve half enjoyed having the table for visual effect but I have to admit we have only used it three times in the four years we’ve had it. Literally three times. Slowly it has become a place for plants and mess rather than eating and relaxing. After much deliberation Chris and I dismantled it, left it outside and within a few hours it had found a new home. The garden is now emptier but it and I can breathe in the gained space and appreciate the plants better. To replace it? Some relaxing chairs. I’ll know this has worked when Chris goes outside and uses them. 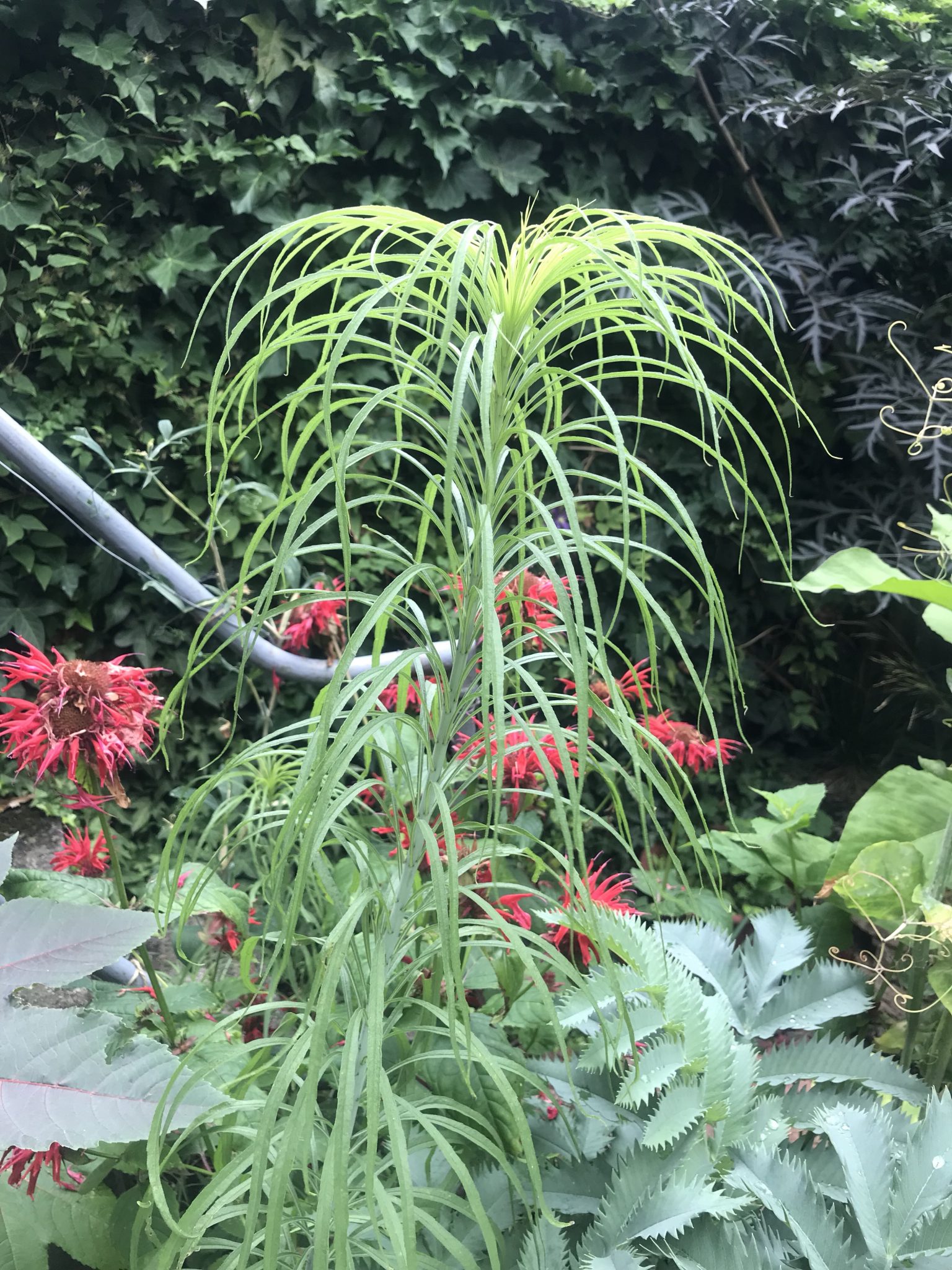 I’d been thinking about Helianthus salicifolia for a few years since reading about it in a Christopher Lloyd book. Last year I saw it in Clive Pankhurst’s tropical garden in Camberwell and fell in love. A sunflower with more leaf than flower, the tall mops of foliage are unique and architectural wonders. In dry sunny spots it will romp away into a substantial clump of a plant – give it room.

An ornamental aubergine for patios 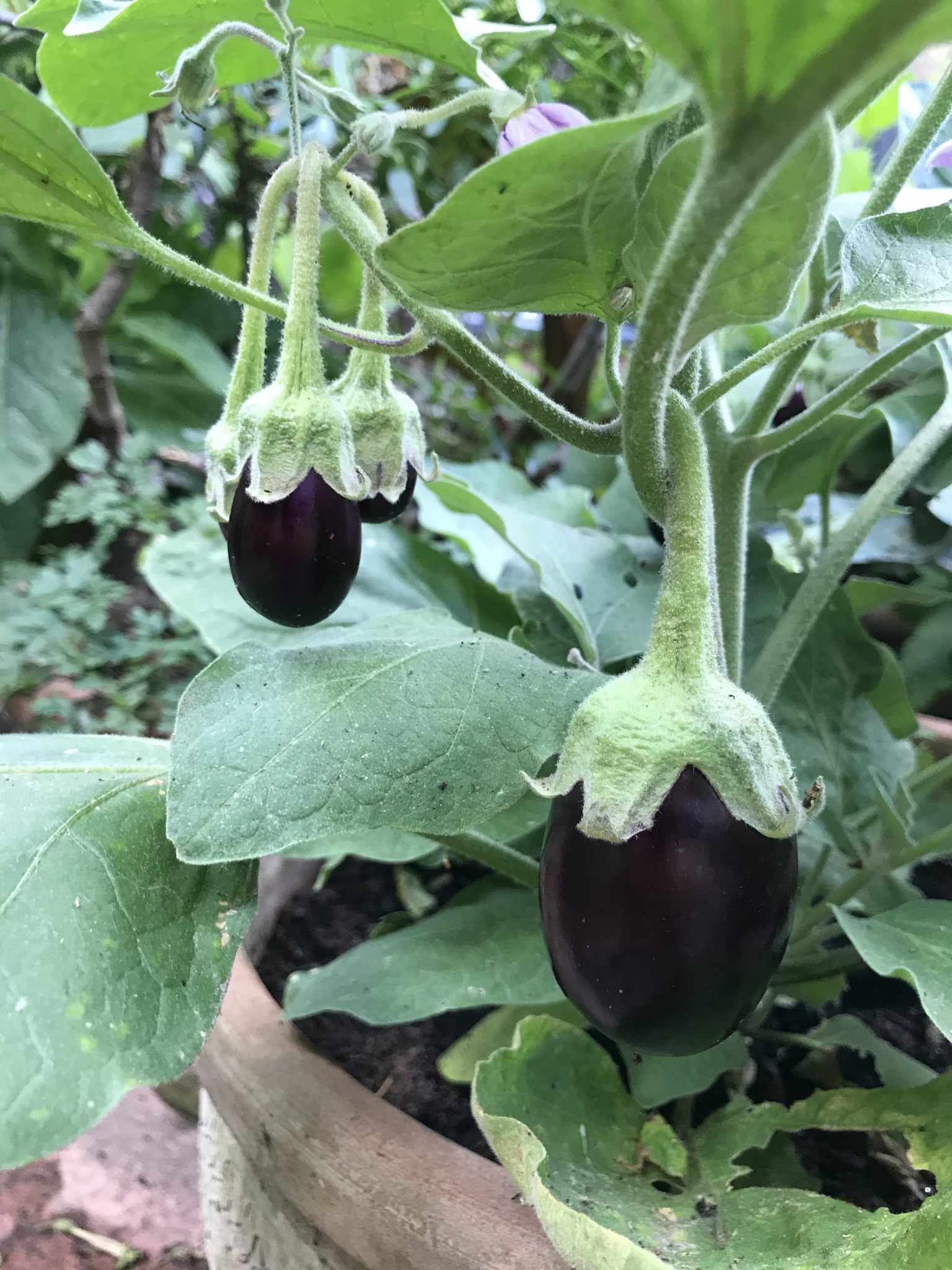 Over the years I’ve tried various vegetables in our garden. This is a shallow exercise in looks, I’m not bothered about the edible aspect here, though it’s obviously a great bonus. I find gardening has developed frustrating jargon over the years that makes little or no sense. A plant is a plant and if it fits your garden’s style, go with it, even if it’s a vegetable as an ornamental. Dwarf French beans are a particularly brilliant example with pretty leaves, flowers and beans. This year I’m delighted to have found Aubergine ‘Pot Black F1’, a mini aubergine bred for life outdoors in the UK. It hasn’t disappointed with lovely big tropical felty leaves, light purple flowers and then of course the fruit. Conditions wise it likes sunlight (though the one above is in half shade) and rich, moisture retentive growing media. 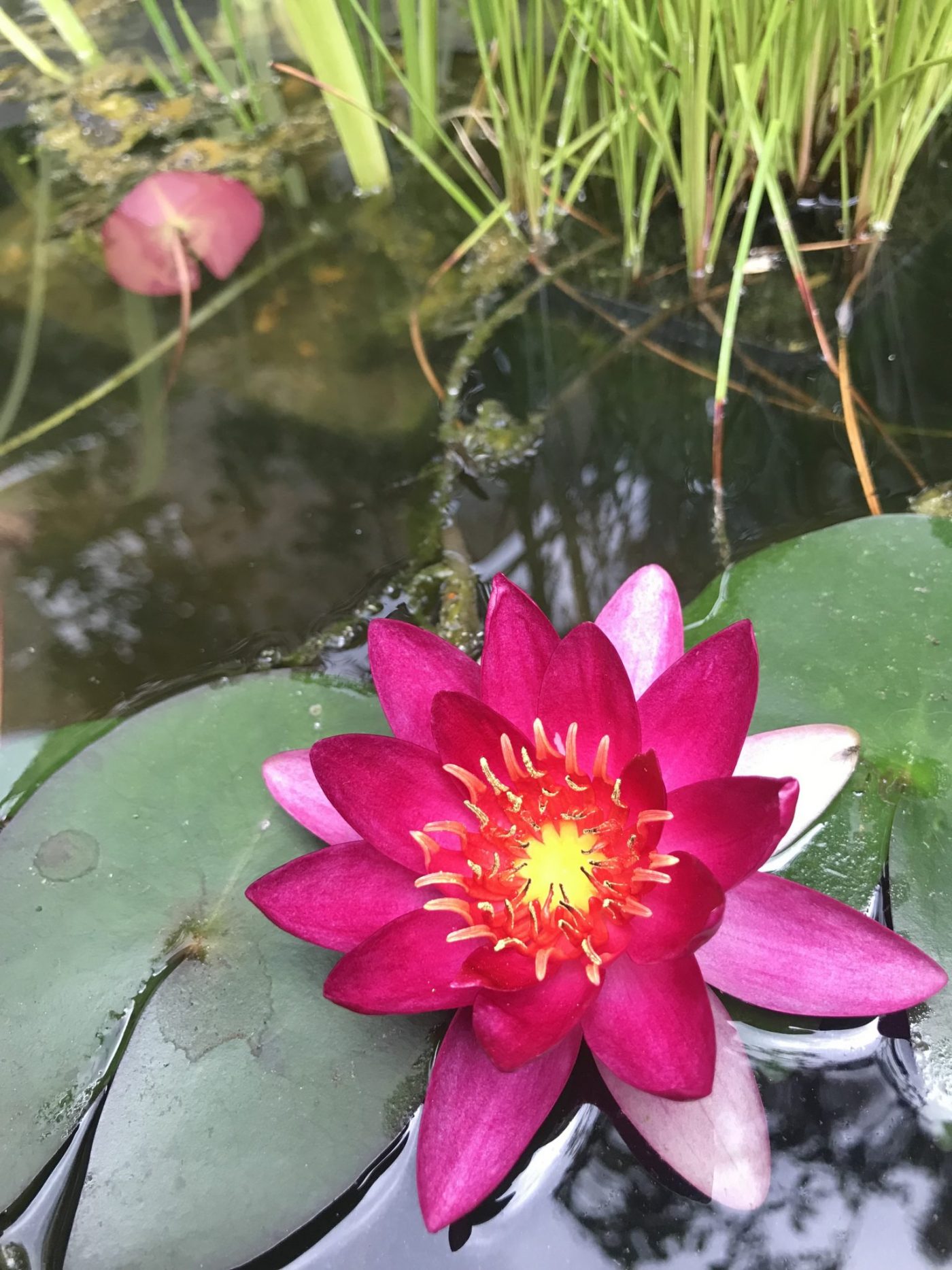 One of my most discussed articles recently has been the hopefully extensive guide to creating a micro wildlife pond in a pot. Responding in kind our waterlily Nymphaea ‘Ladekeri Fulgens’, in its fourth summer, has been flowering non-stop. Its finest year.

At first I thought Euplagia quadripunctaria was a butterfly, it’s an attractive day flying large moth. Our garden this year – and I’ve noticed all round London – is full of them. Last year we had a few but this year they’re really at home in our wildlife garden. A new moth to mainland UK, before its habitat was warmer climates of the Channel Islands and the very south coast. Another sign of global warming or London’s microclimate? Or both? You decide. 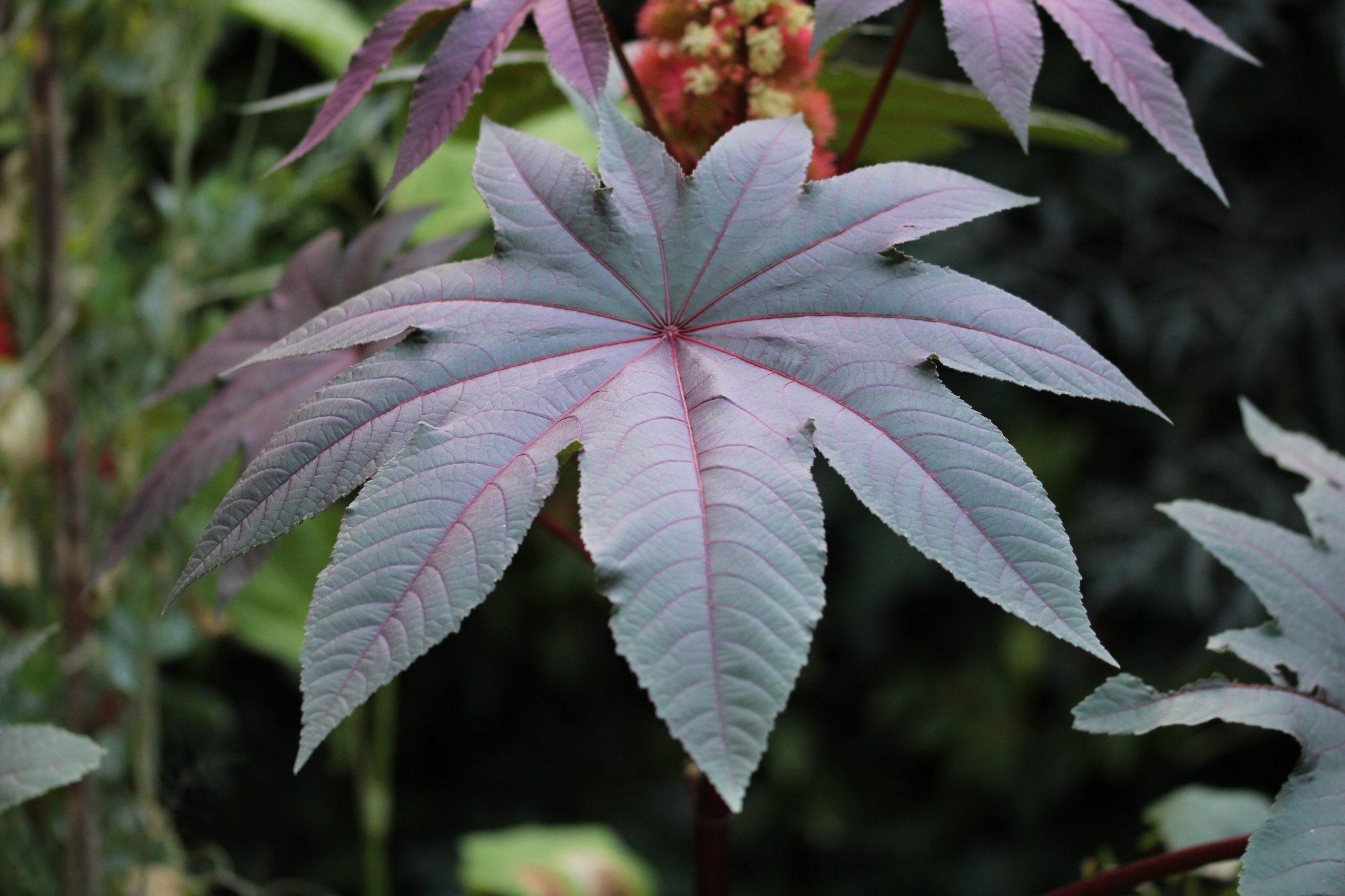 One of our garden staples has always been Ricinus communis ‘Carmenchita’. I once grew another cultivar but the shading wasn’t quite right with the other plants. This year I grew mine from seeds of last year’s plants, saved in late Autumn. They’ve grown perfectly and it seems true to the cultivar. They’ll grow well in dry soils but if you want the super large luxurious leaves you must keep feeding and watering them. They have a tendency to reach a certain size and then slow down. A perennial plant treated as an annual, it’s our job to keep them growing from this point in the year for a real attention grabber through August and September.

Return of a friend 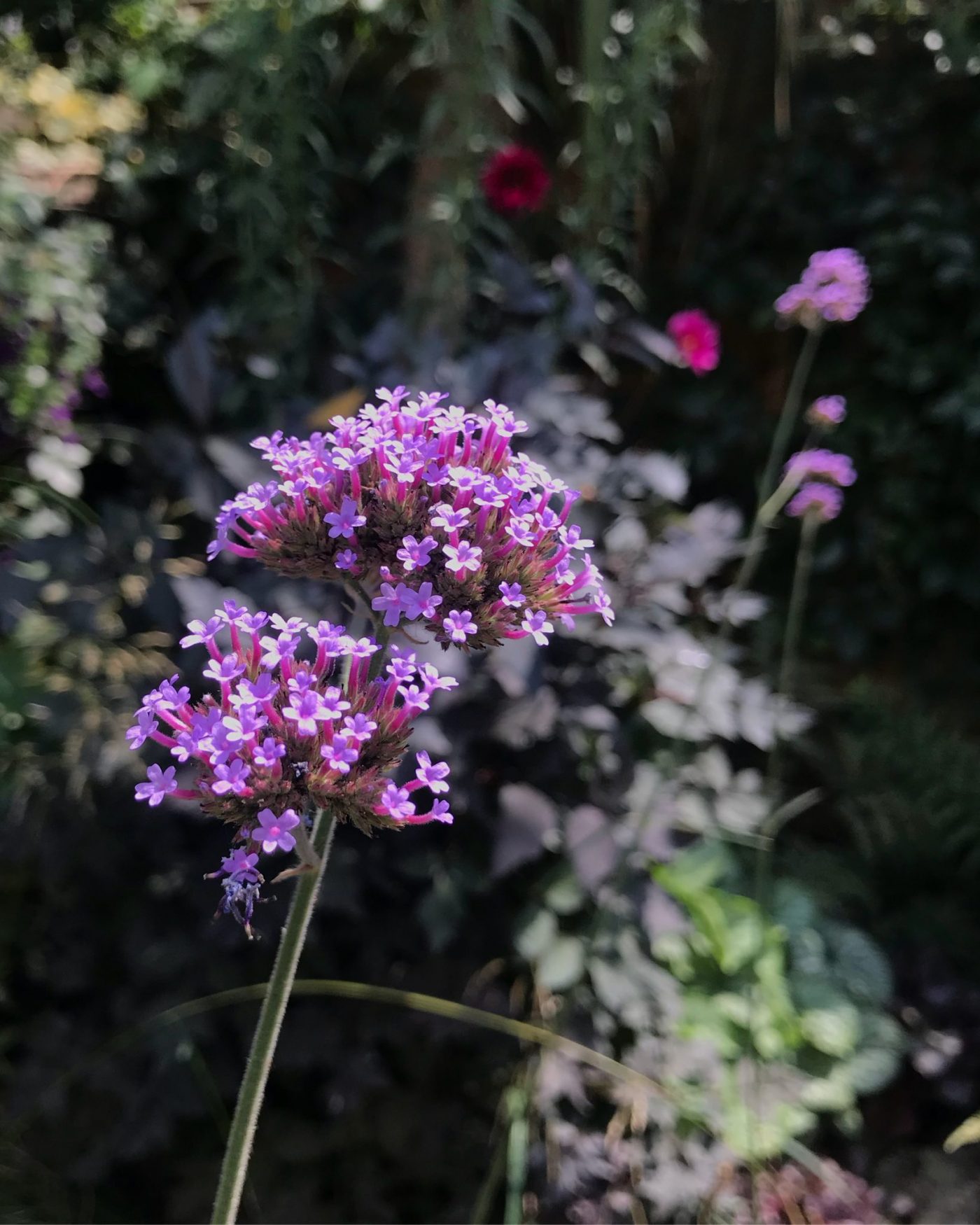 Verbena bonariensis is a common feature in gardens of ‘those in the know’ about plants. It’s a wonderful thing, extremely tall and even thinner. I added it to our garden four, maybe five years ago and this year it has self seeded rather majestically into the gravel beneath our raised bed. This new positioning suits it far better, leaping out of the hurly burly of the other flowers to stand in front without blocking sunlight. Although the purple is more a mauve-lilac than I normally grow in our garden, it has a strange UV glow that fits the place. A plant loved into mass popularity, it rightly deserves its place in gardens. We just need to keep being creative with it to prevent this falling in line with the ubiquitous Euonymus and Pampas grass.

Our garden is famous! 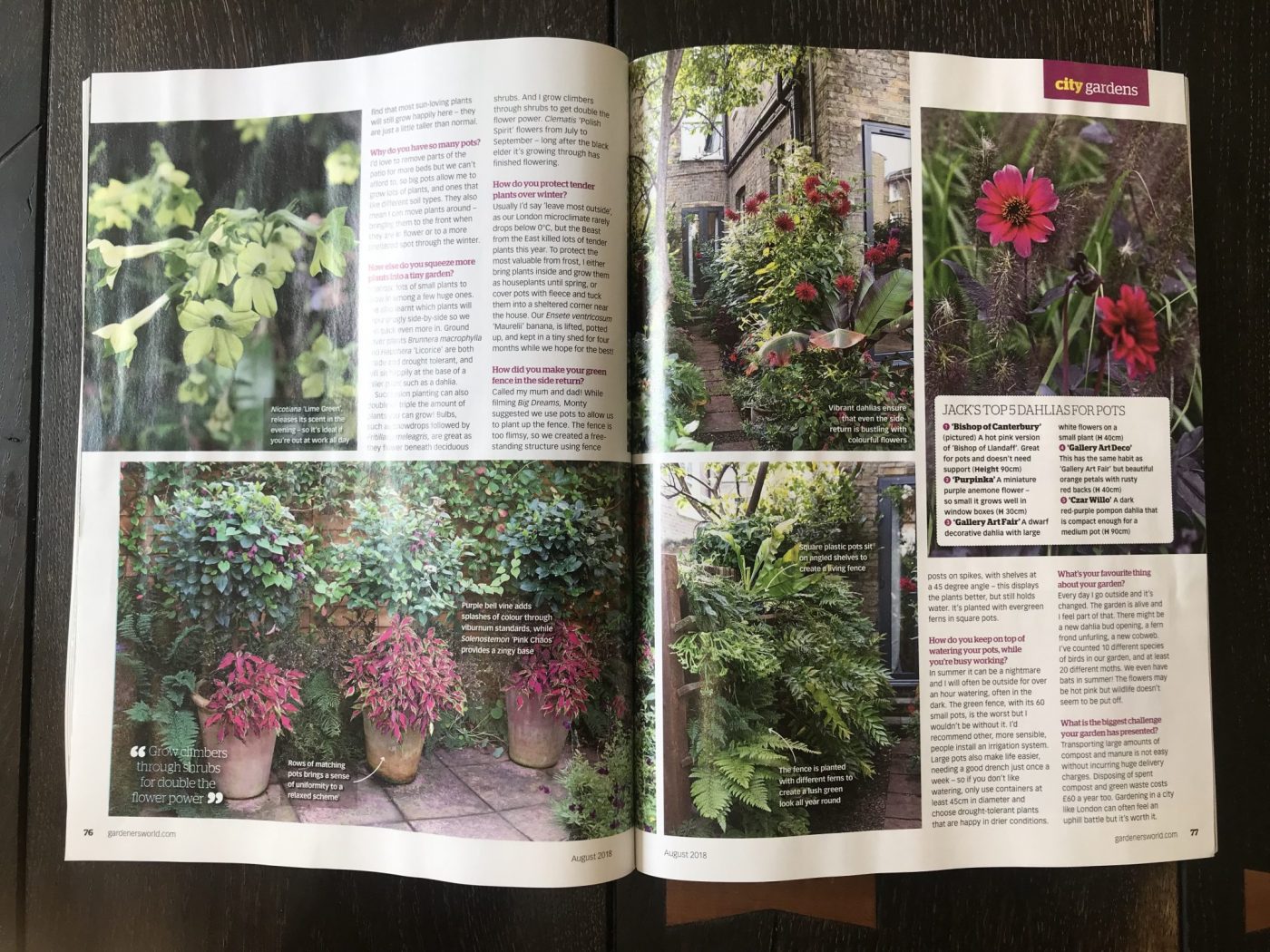 I was asked to write a number of tips about growing plants in small spaces and shade for Gardeners’ World Magazine this month. Very exciting. The key thing for me is that all of these photos were taken in October 2017 showing how colourful and lush a garden can look well into late Autumn. There are signs that we’re late in the year with some leaves turning yellow, less colour and a few brown seed heads. Please check it out now, there are four pages of advice and ideas.