Chris and I have just come back from a trip to LA, Vegas and Malibu visiting for a wedding. Once you enter the kingdom of plants, the world you see through green-tinged glasses changes radically and this latest trip to the states felt like stepping into an alternate universe due in part to the choice of plants used in urban plantings and people’s front gardens. In this post I’m going to document some of my observations from the streets of California.

My best friend from school, David, who I’ve known from the age of thirteen, is a true man of the world. Travelling the planet ten years ago with my equally good partner in crime, Stacey (we met at school, went to uni together and the rest is obviously history). David and Stacey have seen parts of the planet most of us can only dream of. Settling for the last decade in Australia, they both now live in different parts of the states. But for David, despite now living in LA, he’ll never escape his glamorous Doncaster roots (because we’ll keep reminding him).

Fortuitously, this continent hopping has meant that I’ve seen some wonders myself visiting them. For this latest escapade to celebrate David’s marriage to his husband Carlos, Chris and I began with a night in Beverley Hills 90210 (yes, the actual 90210 in West Hollywood!)

We never stay anywhere particularly expensive; on the first night we lucked out as we needed somewhere close to the airport to rest after the ten hour flight. When the cheapest hotel had that street address we snapped it up and we arrived to find a hotel filled with a surprisingly huge amount of plants! Both on its roof top terrace and inner courtyard. Clearly someone in the management team is a keen gardener with good design choice. 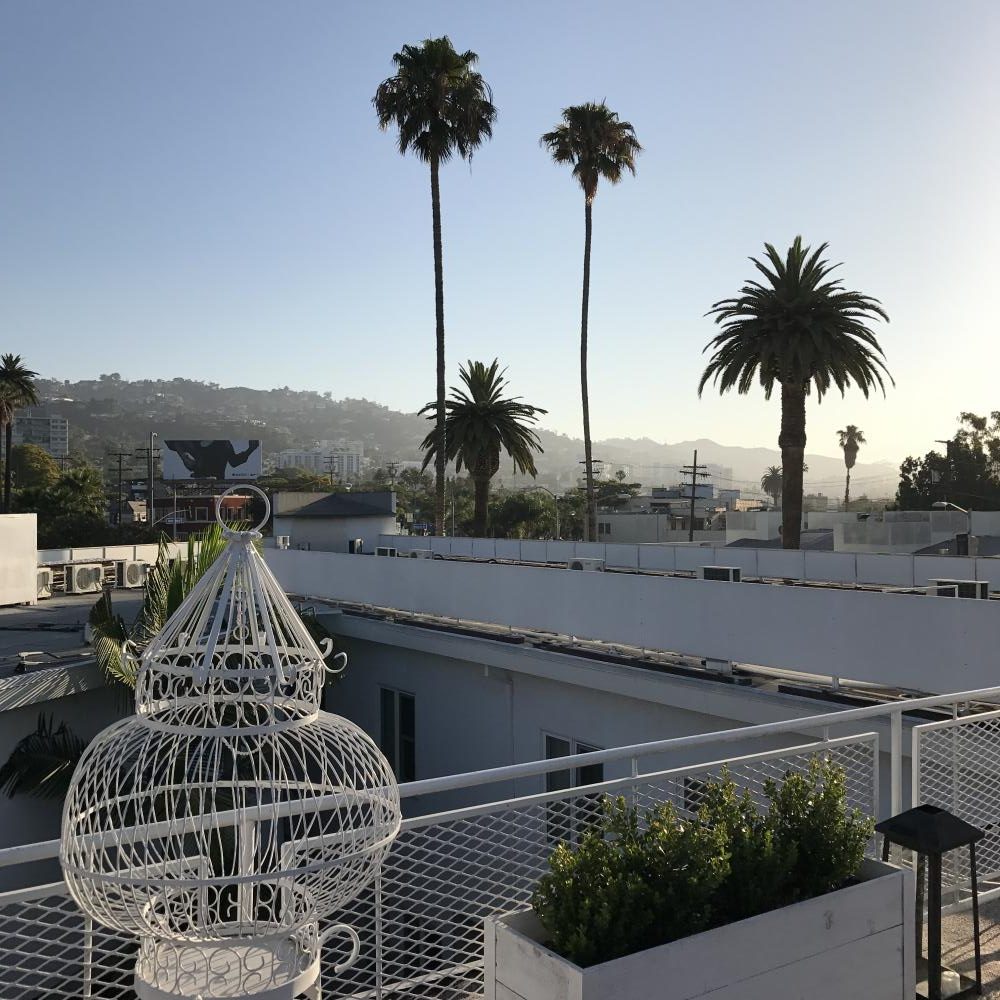 My strongest memory of that place is seeing sunrise on the roof terrace and appreciating how lush and tropical Los Angeles is. In London, the view is usually cloud-like canopies of plane trees. Here it was tall palms against a blue sky. 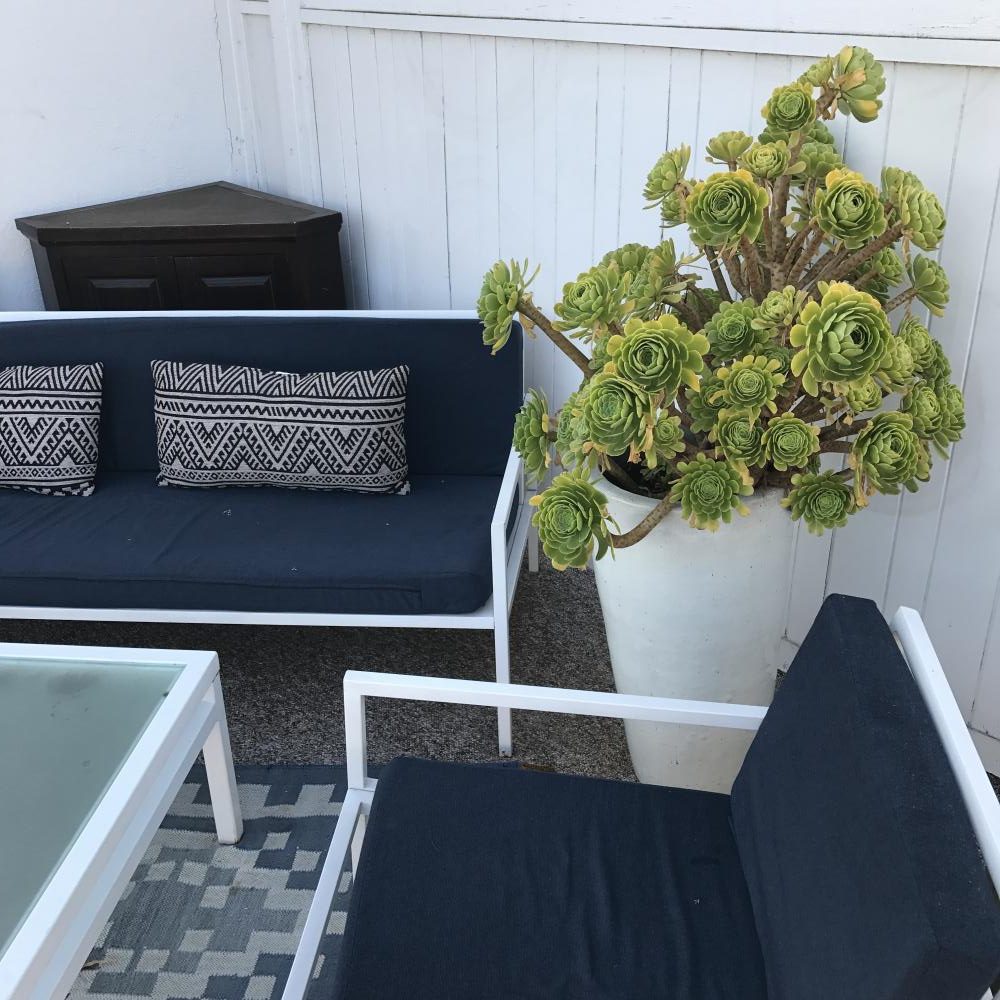 The hotel was filled with some of the nicest outdoor furniture I’ve seen to date too. A consistent theme everywhere we stayed. We have a long way to go with the range available in the UK where we’re trapped in a wicker and teak loop.

I’ve seen some big trees in my time (including the giant Sequoias on our last trip to California) but none as wide as this Ficus macrophylla. Chris and I spent two nights before the wedding mayhem on the beach of Santa Barbara where we stubbled across this ginormous, 60m wide tree. I was surprised to read that it is only 150 years old. 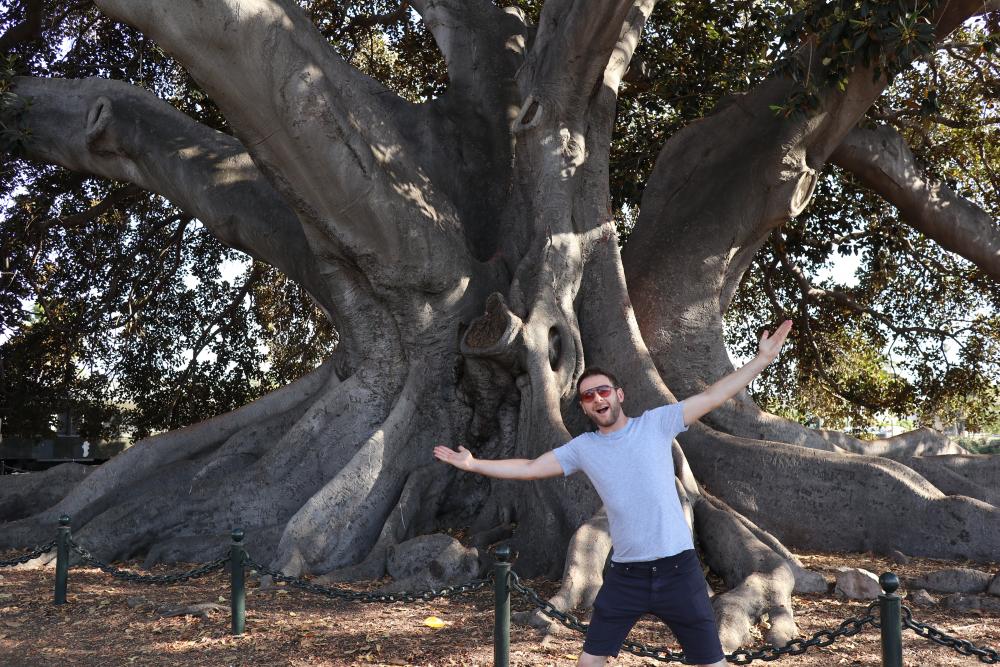 We stopped at Santa Barbara, north of LA, five years ago on our bigger road trip of California and had happy memories of that night there. This time we were more impressed as we explored further. 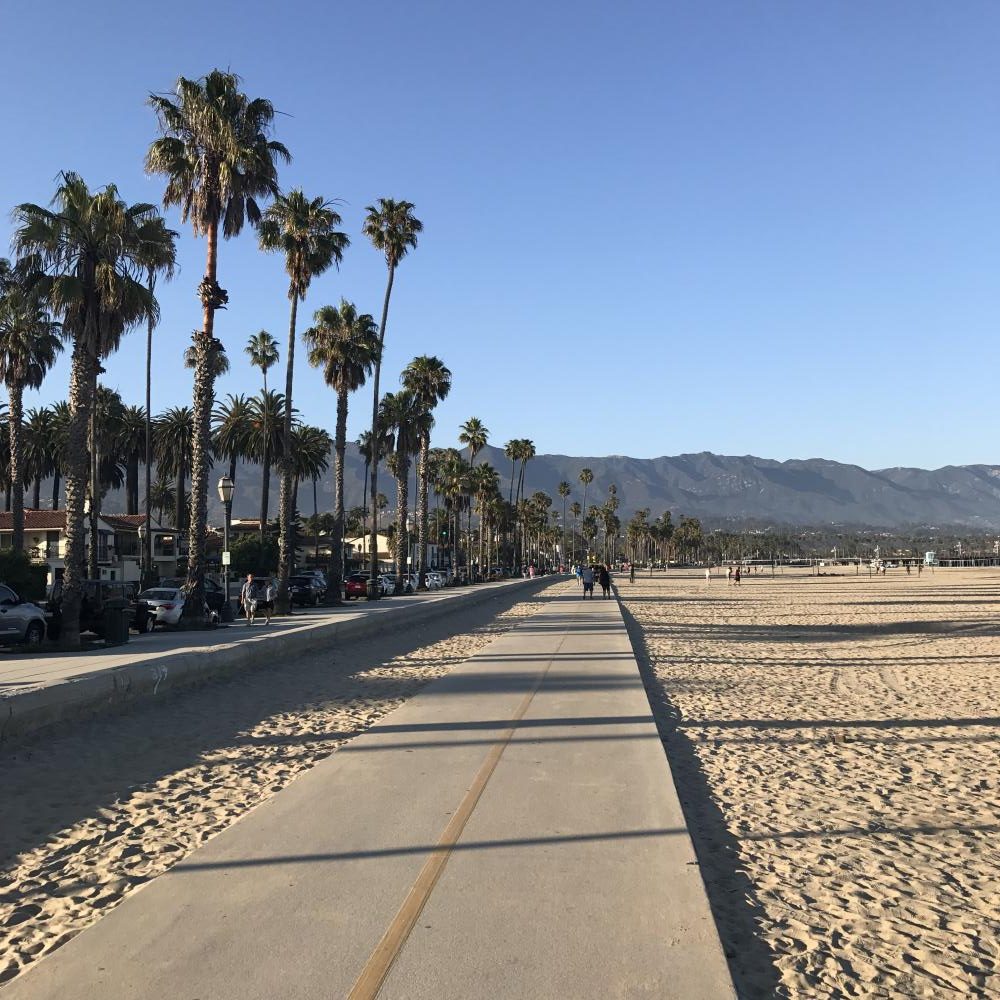 You can’t escape the giant lollipop palms (Washingtonia robusta or W. filifera I think?) along the beach and the long shadows they create from the lower sun. 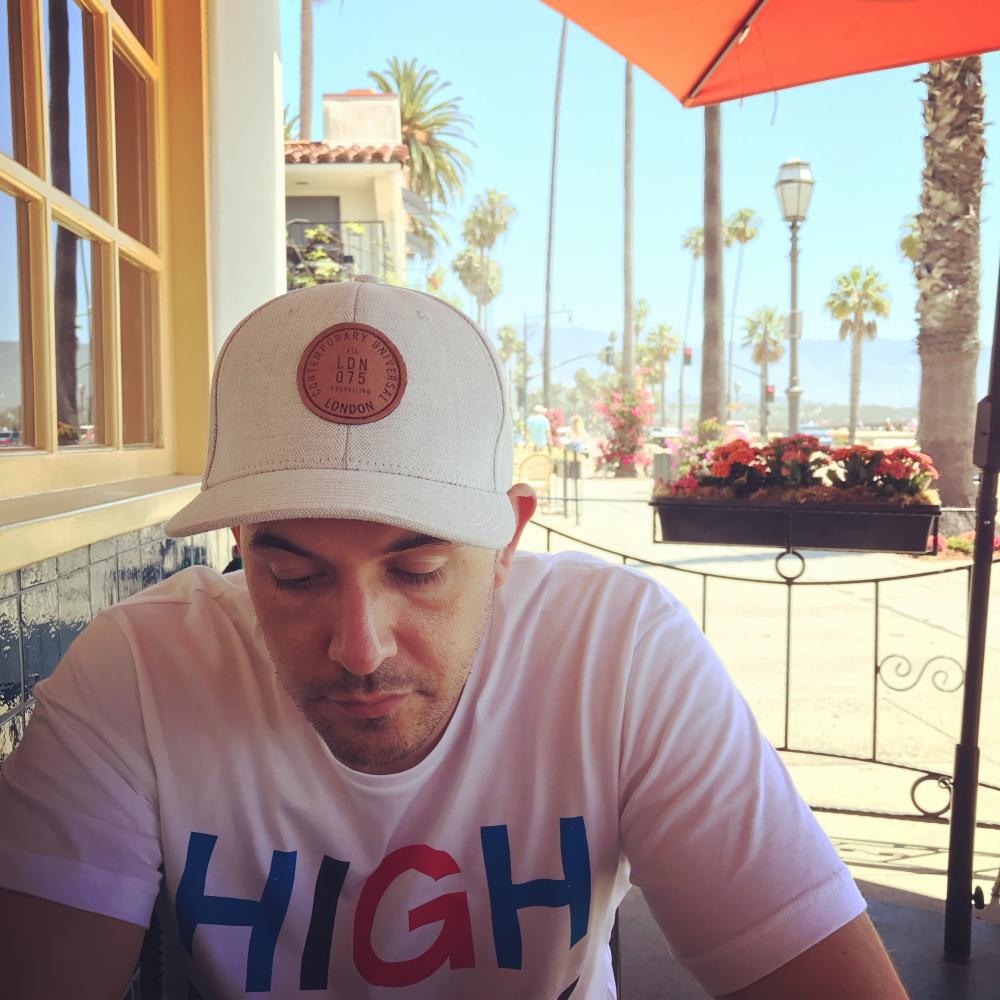 Noticeably in Santa Barbara, almost all of the street planting and gardens were full of plants we typically have in our houses in the UK. Such as Asparagus fern, Asparagus aethiopicus, and Philodendron xanadu. 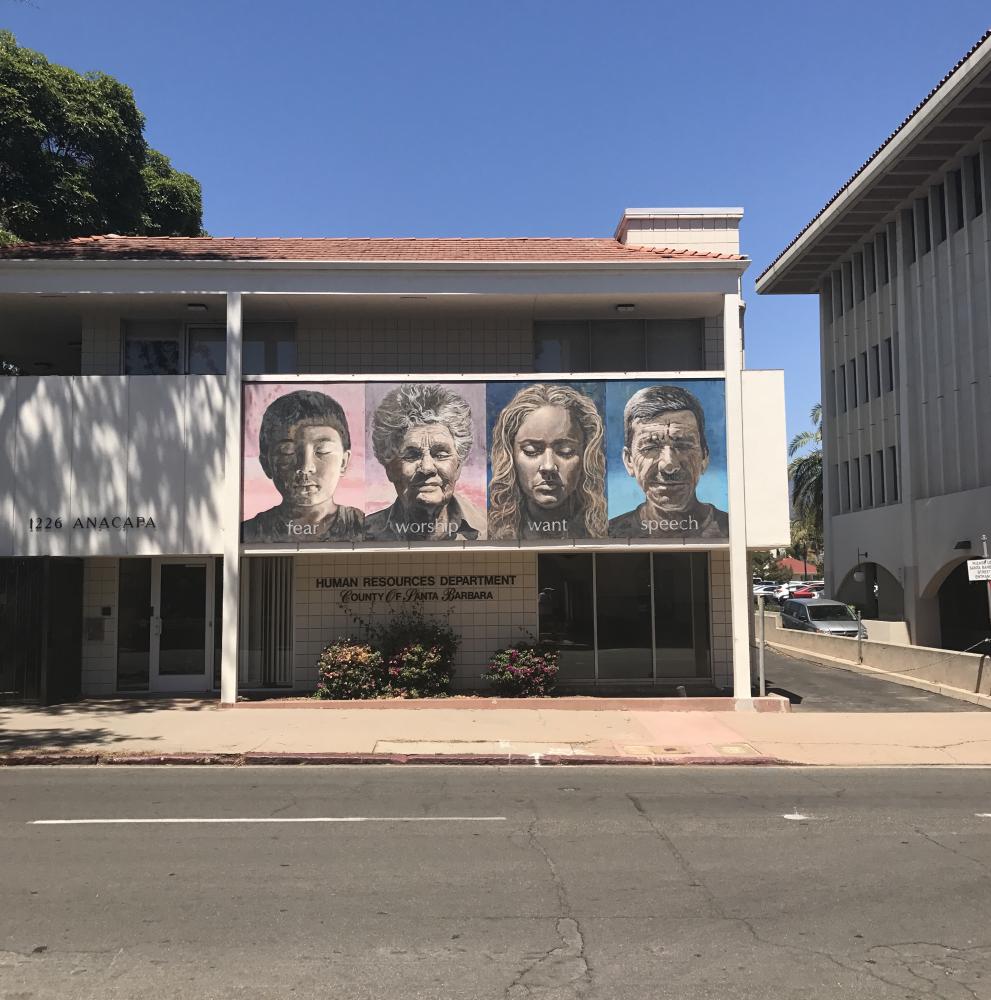 … and quickly came across many cycads including this spectacular female cycad in flower. 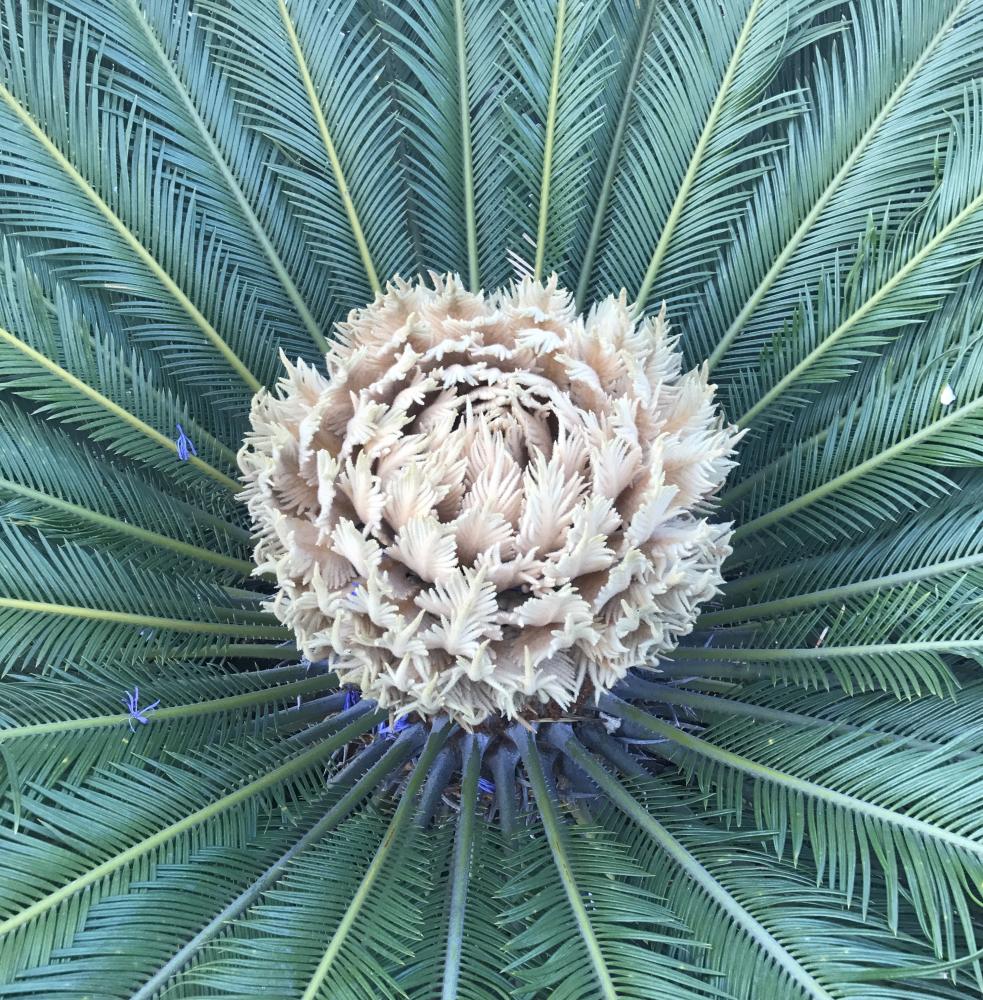 There’s a large court house in Santa Barbara with a wonderful painted courtroom and grounds. It’s the view from the rooftop I want to draw your attention to however. 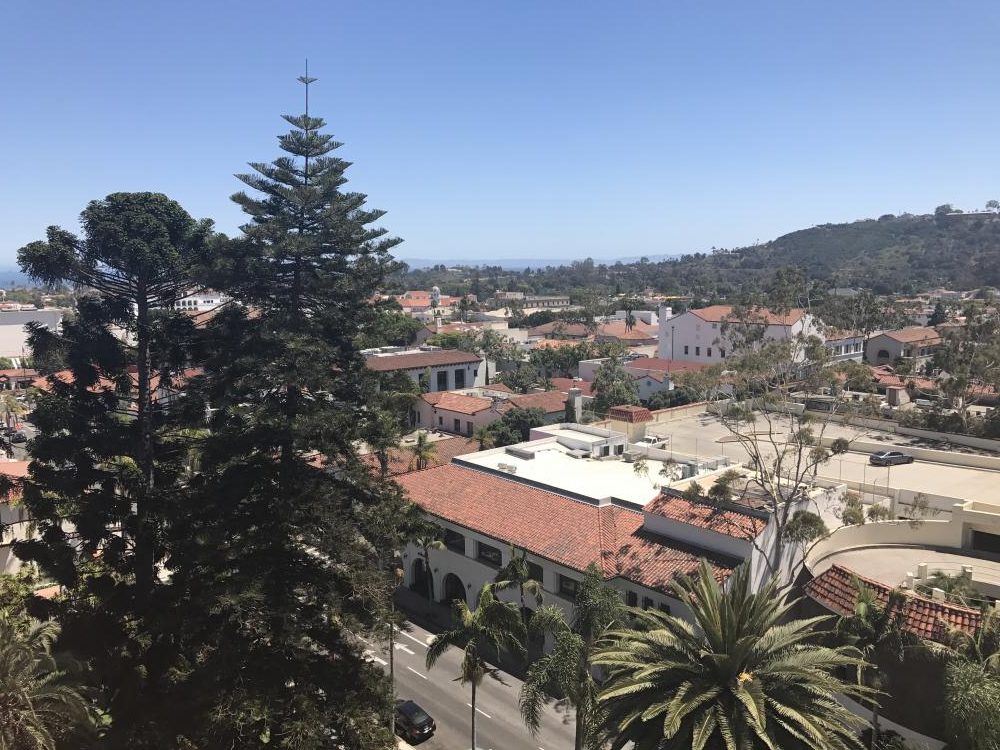 Quite often tower views are a bit disappointing. With the sea on one side, the Santa Monica mountains on the other and a tropical city scape in between, this had to be one of the best I’ve ever seen (up there with Dubrovnik old town, Croatia).

On the left of the above picture you can see two close Araucaria araucana (Monkey Puzzle) relatives. Araucaria heterophylla (Norfolk Pine) and Araucaria bidwillii (the hilariously named Bunya-Bunya tree from Australia). Around California you can also see Araucaria angustifolia.

I love all Araucarias, so seeing these two towering plants from the ground and up high was an exciting moment for me. A. heterophylla in the UK we rarely see larger than a meter or two – the tallest I’ve seen is in the Barbican Conservatory, London at about 4-5 meters, at least a third of this one. 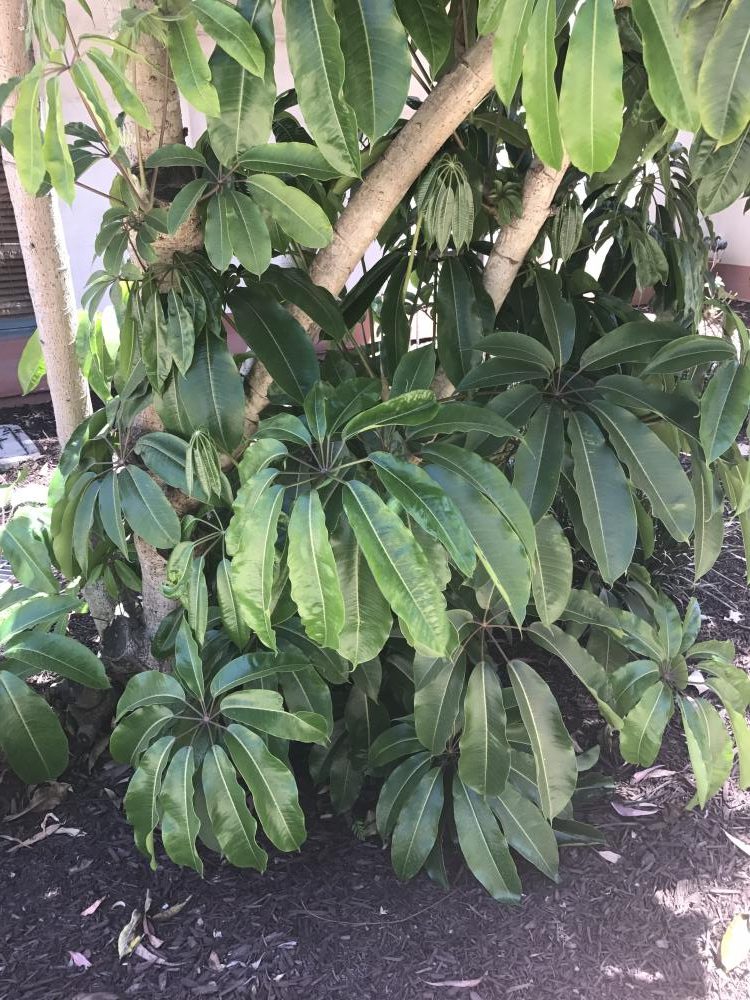 I have a hardy Schefflera plant, really enjoying its compound leaf shape. In California there are many Schefflera to be found in the streets and the one above had the largest leaves I spotted, easily 30cm in diameter, probably more like 40cm. 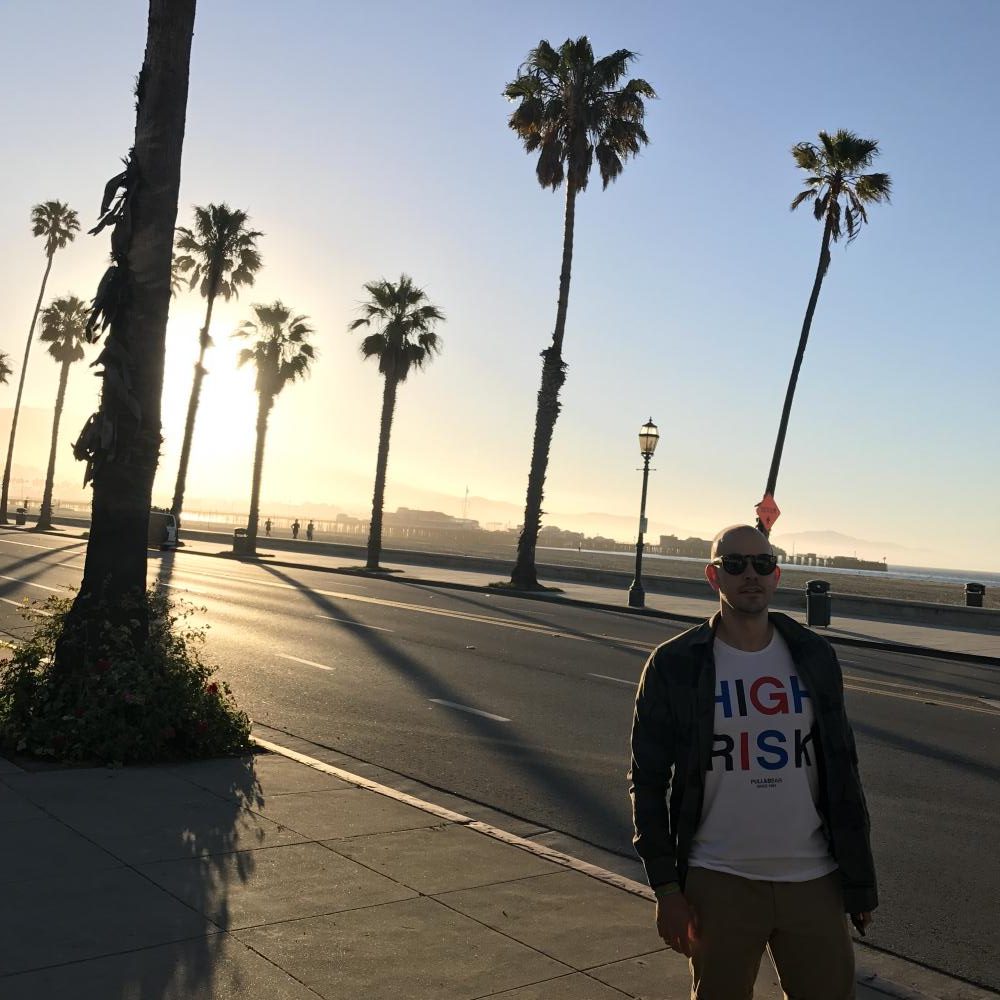 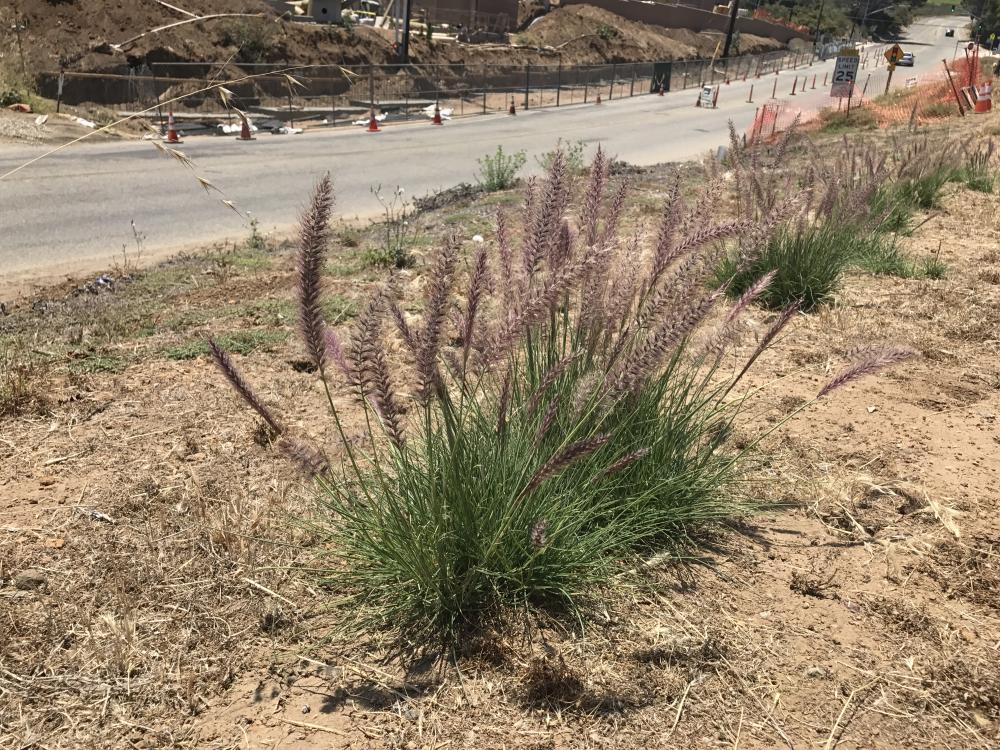 Pennisetum grass can be seen in gardens all over California and many roadside verges. It’s one of many invasive aliens to California introduced by humans as garden plants – others include Eucalyptus, Ricinus and Foeniculum. None native to California but readily seen growing wild everywhere. In the UK our climate is currently too cold in winter for these to be so invasive, but this could be an indication of what’s to come as our climate continues to warm.

After Santa Barbara we headed across the desert and to Las Vegas for a mini-stag do. It was interesting in Las Vegas that, despite the perfect climate for it, cacti and succulents were rarely seen. Instead, huge amounts of water are piped into this excessive desert city to irrigate lusher palms. That said, on the way home when we spent more time in the desert, we did come across Peggy Sue’s 1950s diner with Aloe and Opuntia outside. 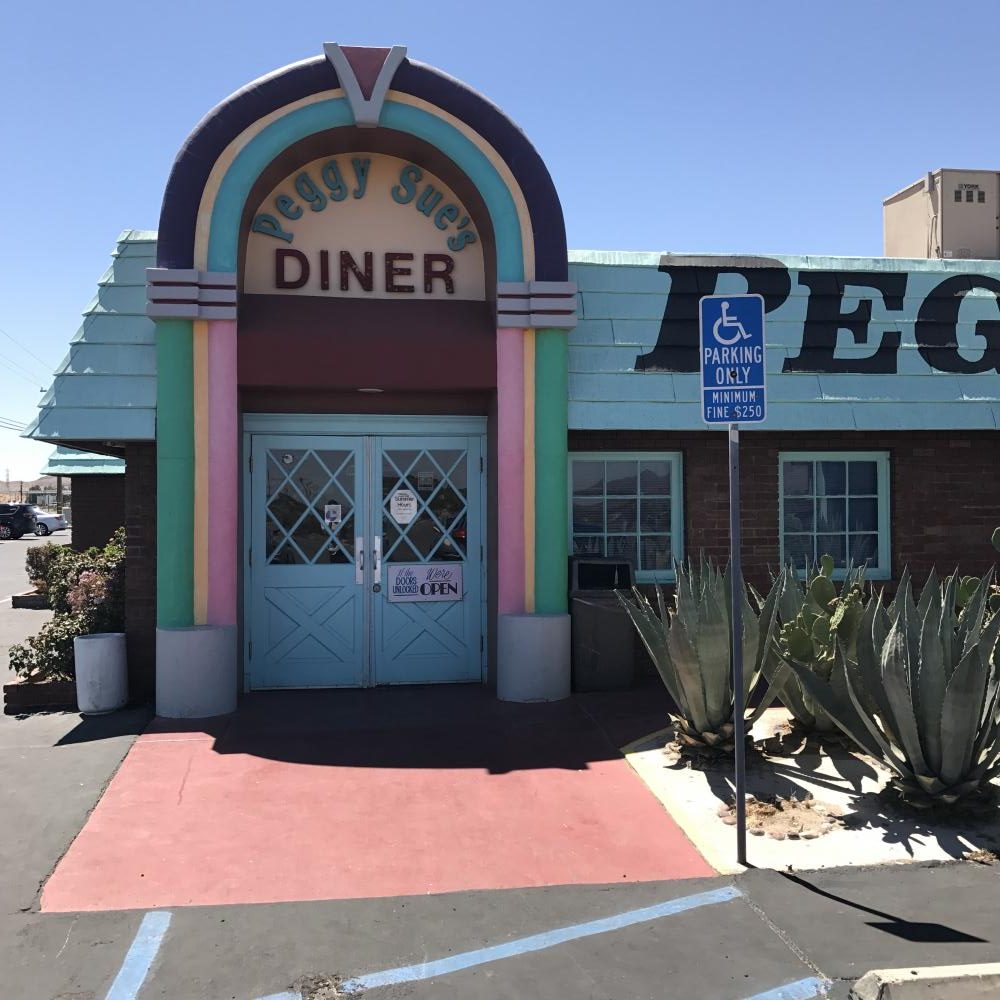 Our final stop of the trip was a few nights in Malibu – a place I had assumed was all celebrity and surfing but is in fact more mountain and national parks. I loved Malibu and will write about it more soon. For now though, I thought I’d share my first glimpse of American prairie planting in America… 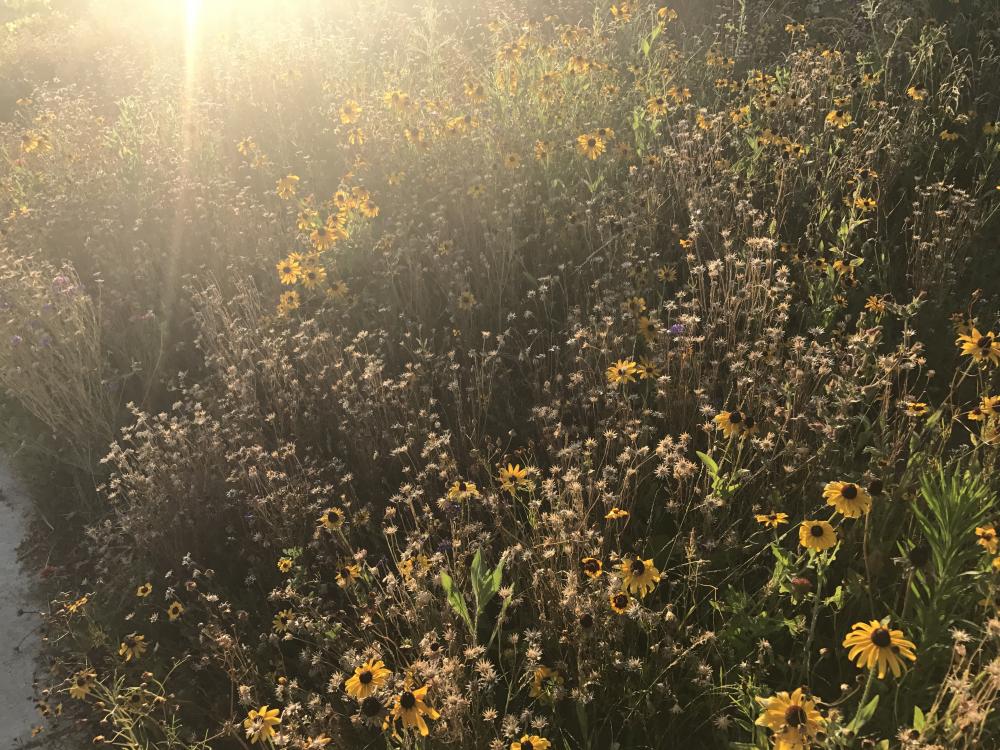 Around our hotel were some interesting trees / shrubs including the below peeling bark and rounded leaved plants. 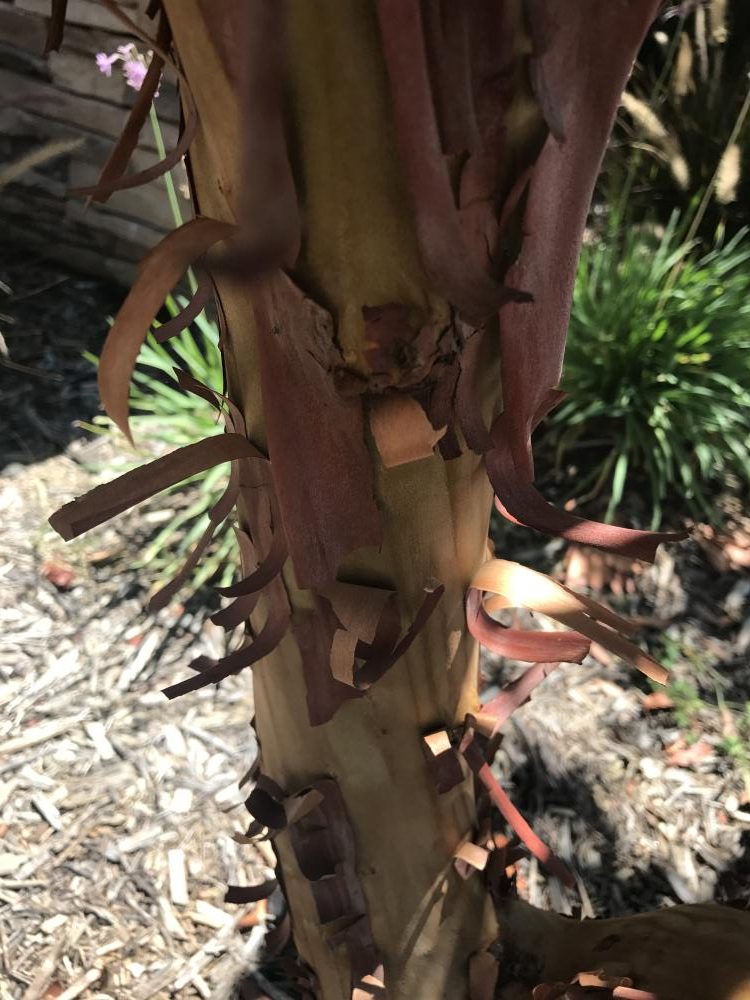 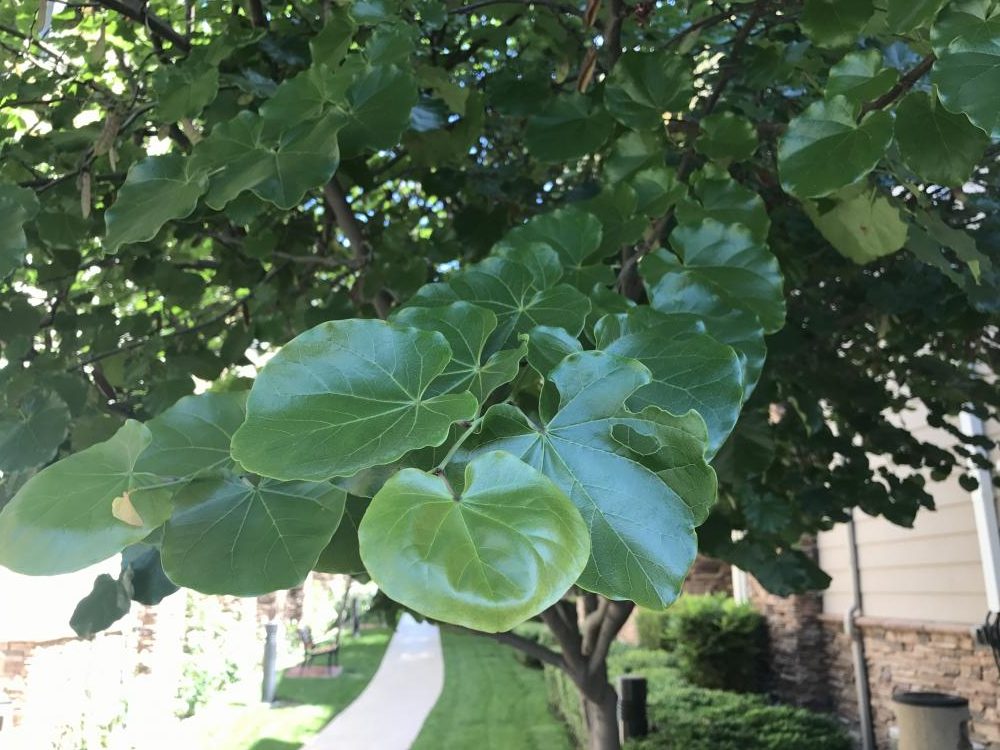 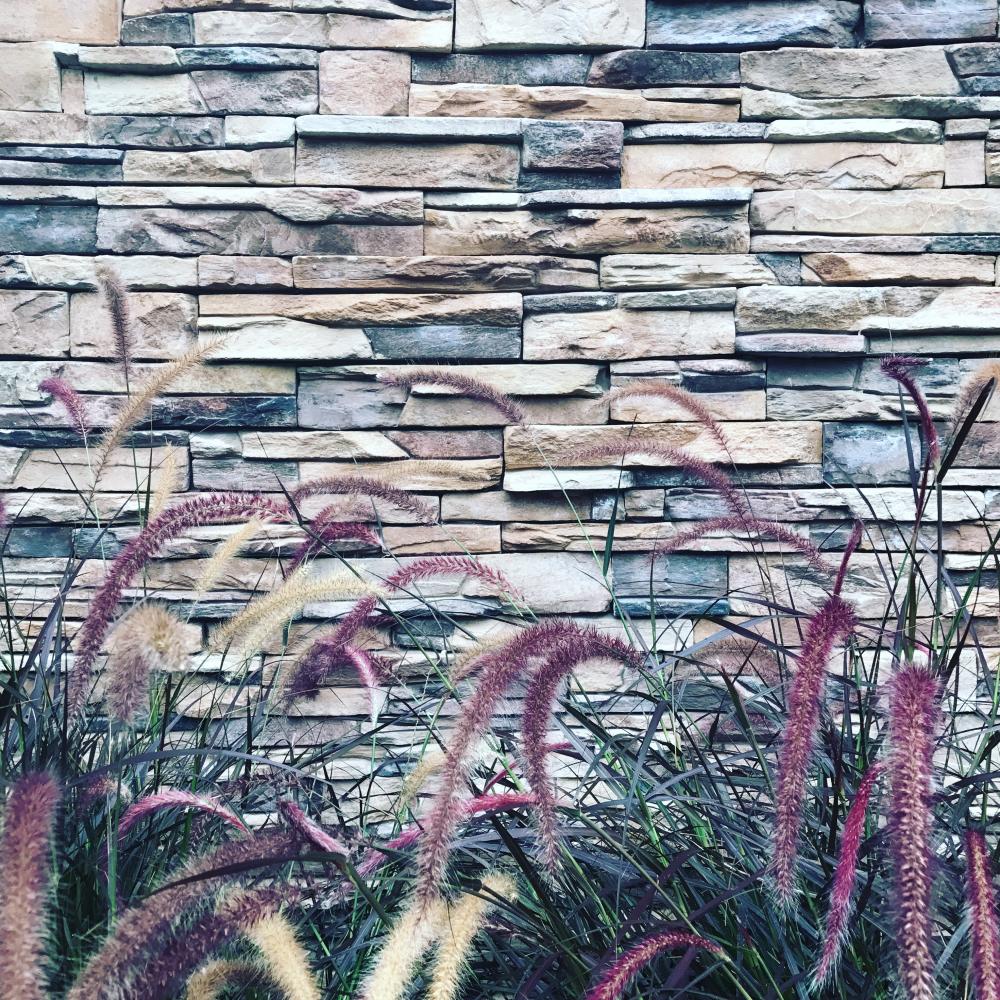 There is one road in Malibu that reportedly has houses owned by Nicole Kidman, Leonardo Dicaprio and many others (Cher is nearby). Who knows which celeb was behind which door, the doors were themselves impressive. 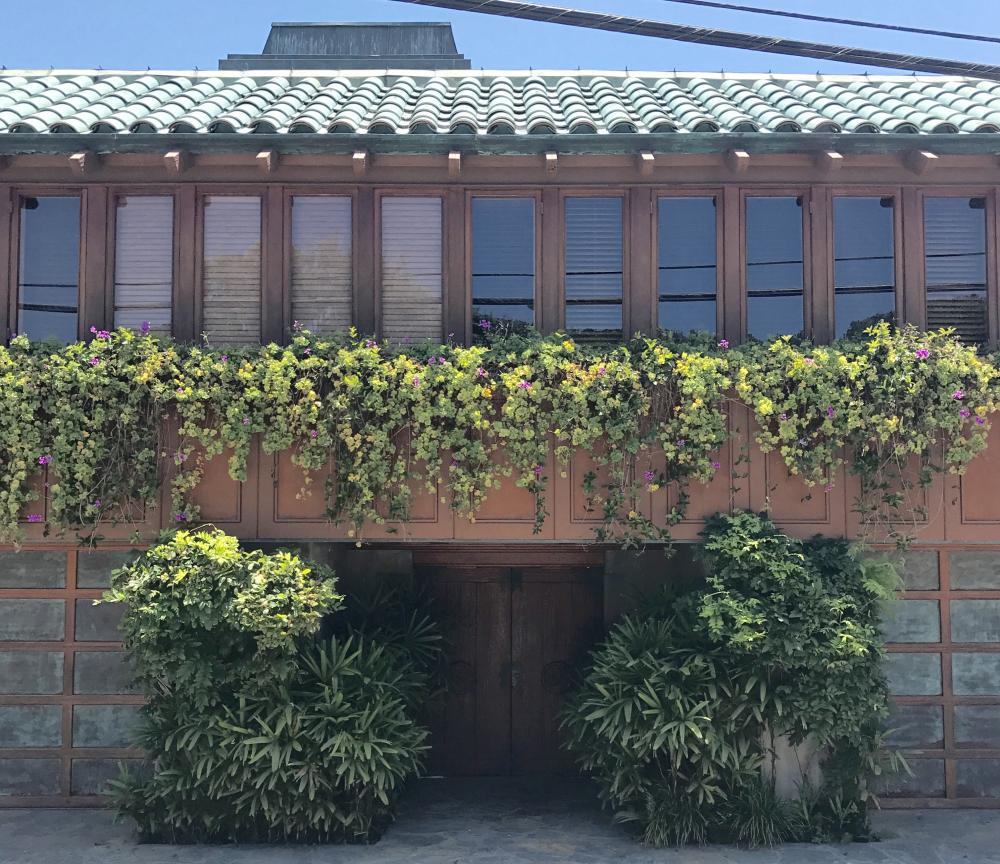 Down by Stacey’s pool it all felt very David Hockney ‘ The Splash’, not because there were naked bums but because of the light and colouring. Next to the pool was another large Schefflera and more tall palms. 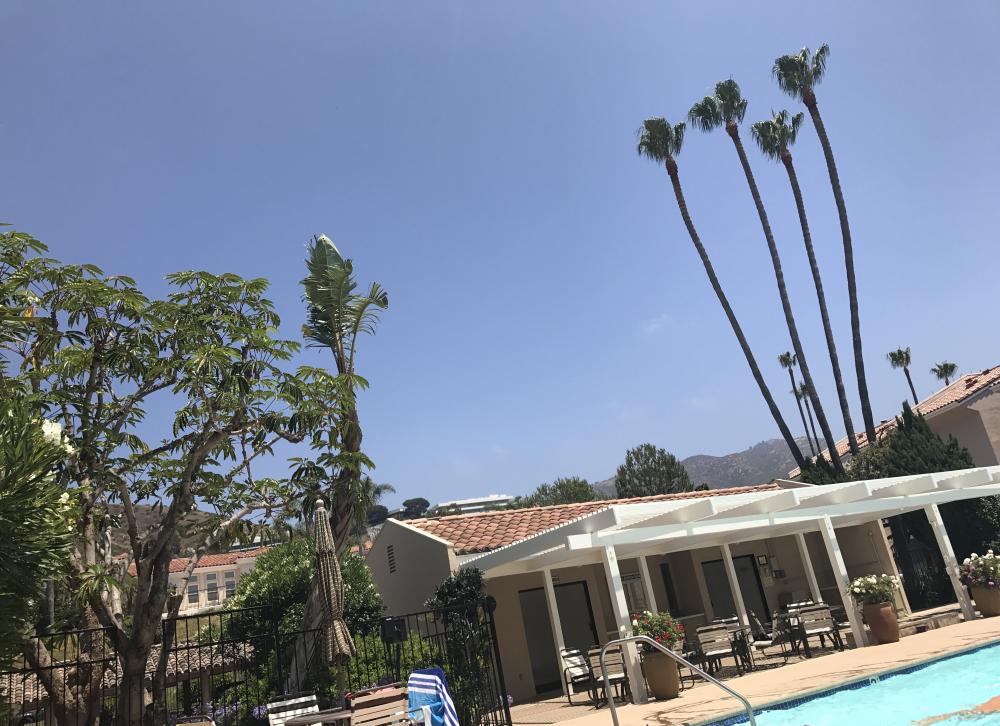 I’ve no idea what the below plant is however its new leaves coloured orange matching its orange flowers were interesting. 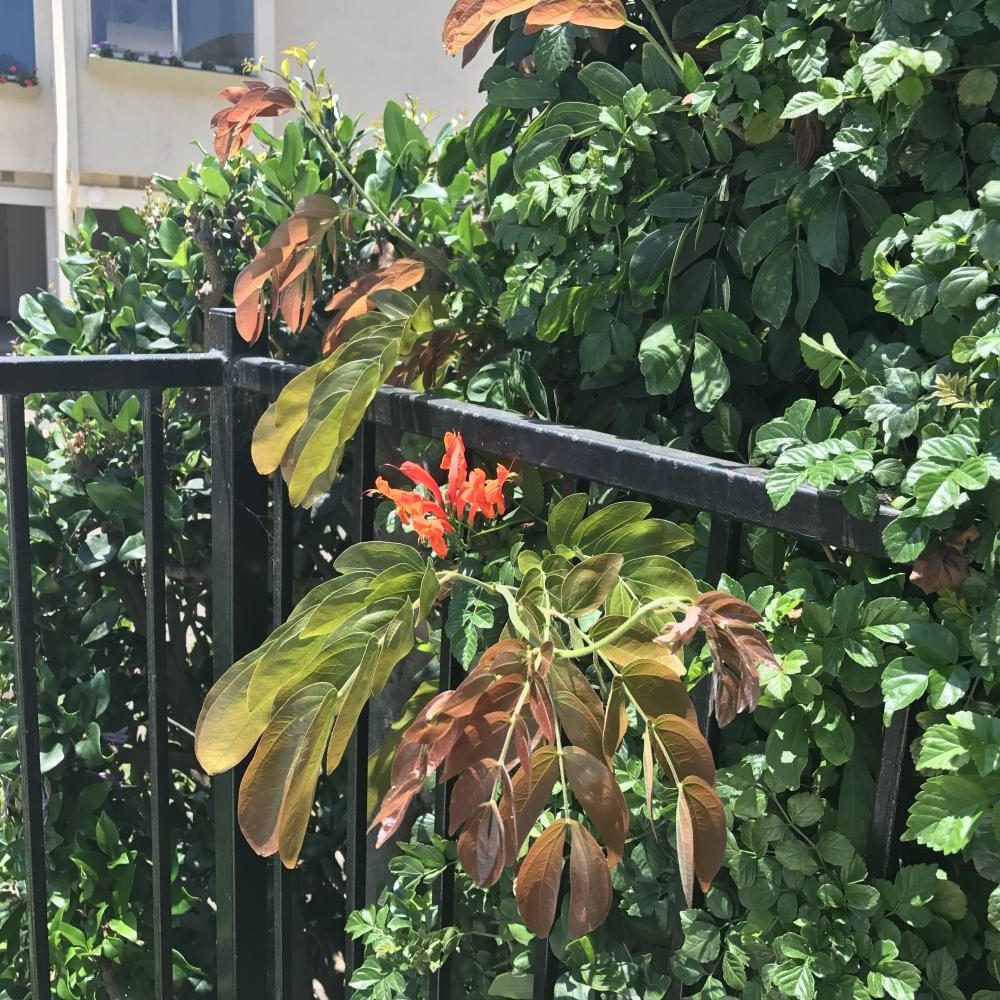 Overall, it was fascinating seeing what plants people had chosen to plant around California. Many were not immediately recognisable, either because they were new to me in person or because they had grown far larger in the warmer climate than what I’m used to.

Large, tropical foliage and lots of yellow and orange flowers were the common theme. Most surprising really, was that many of the plants being planted were from other countries, just the same as we do here. People are obviously drawn to the unfamiliar and unusual in their personal and public gardens wherever they are. To me, this was more interesting because in the UK we look to North America’s native plants for most of our garden plants. Which I guess proves once and for all that the ornamental grass is indeed greener on the other side. 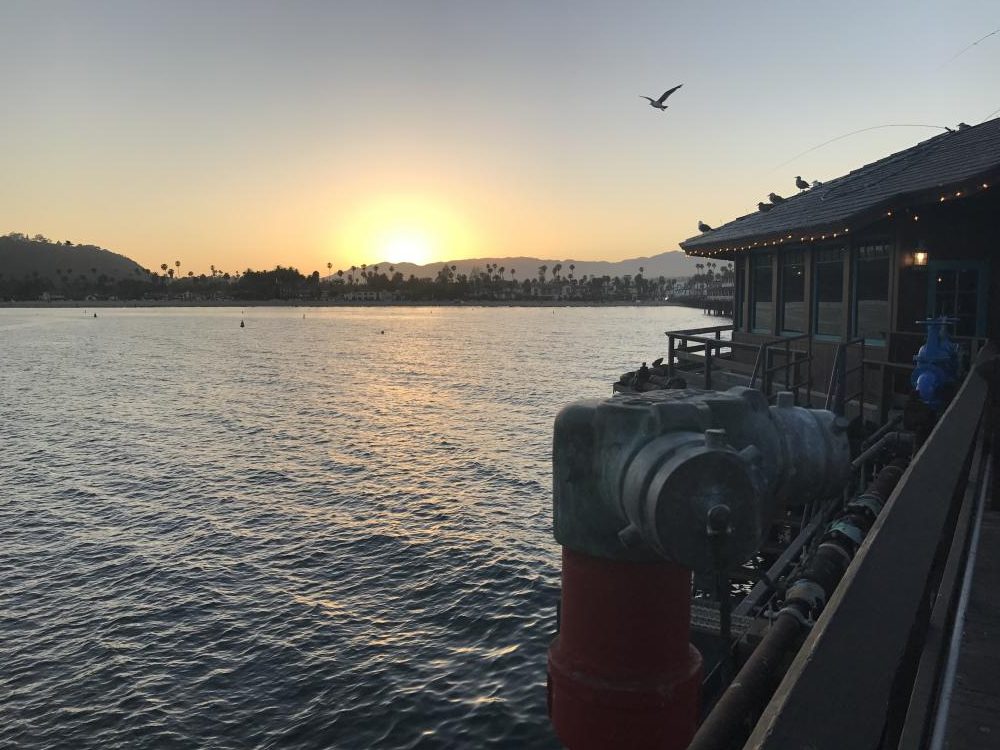 2 thoughts on “From the streets: California”